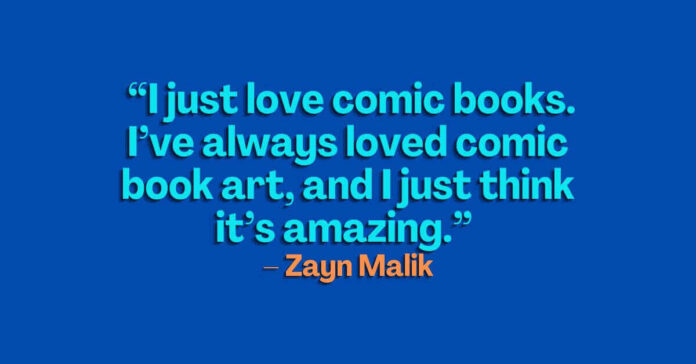 1. “I’m very lucky that I started out as a reader of the comic book and a viewer of the show. And I try to remain that, and make ‘The Walking Dead’ that I love watching. Luckily, I have the source material that I love, and I want to serve that as well.” – Scott M. Gimple

2. “My brother is a comic-book writer, and I was always in love with comics.” – Adrianne Palicki

3. “The Cape’ is a really good comic! They invented the whole character, and now they’ve built a book of ‘The Cape’ for the show. When I was a kid, I used to love Batman, and I loved Spider-Man. My favorite was this guy called Judge Dredd. I know they made a movie of that in the ’90s.” – James Frain

4.“This is the contradiction we have in the media. We love vigilantes: Batman, Tarzan, Green Arrow – the comic books and the TV shows are filled with vigilantes. We love to promote it. Jesus Christ was a vigilante. We admire these people, but we don’t want to be associated with them.” – Paul Watson

5. “I think comics will always be around. I think there’s something nice about a comic book. People love to hold ’em, turn the pages, fold ’em up, roll ’em up, stick ’em in their back pocket, show ’em to a friend, and say, “Hey, look at this.” – Stan Lee

6. “What I love about ‘The Walking Dead’ is it’s a human story, which is to me what makes the comic book so good, but once you jump from the pages of the book to the screen, the gore and the zombies have to look great.” – Scott Ian

7. “I love melodrama. I love the simple fact. When you read Euripides he’s a page turner. It’s like reading a Mexican comic book romance.” – Guy Maddin 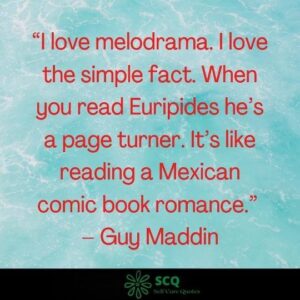 8. “I want to play the Green Lantern. I’d love to be a comic book hero. Go to the gym, get all buff, puff up. That would be a lot of fun.” – Matthew Settle

10. “I was not a comic book reader, but my son is. My son wasn’t really interested in reading books, which was hard for me because I love to read. It just didn’t come naturally to my boy. So we kind of found comic books because they were fascinating to him. They were great stories.” – Virginia Madsen

12. “I think there’s a possibility that comic book movies are getting a tiny bit better on the one hand because they’re no longer made by executives, who are, you know, ninety-year-old bald tailors with cigars, going, ‘The kids love this!” – Joss Whedon

13. “What I love about Popsicle and the moments I can be with Camden is that their whole philosophy is family and these moments that it can create to just sit with my son, read a comic book or go outside on a hot day, take a swim and have a Popsicle treat with him.” – Vanessa Lachey

14. “One of the things I would love to do is ‘Axe Cop,’ which is a comic book. I would like to be involved in ‘Axe Cop’ someday. I would also love to be in a Western.” – Ken Marino

15. “Comic-book pages are vertical, and movie screens are relentlessly horizontal. But it’s all the same form. We use different tools, but we get the job done. I’m completely in love with CGI. It’s great for conveying a cartoonist’s sense of reality.” – Frank Miller

16. “I’m a big comic book person. I love Captain America. I like John Henry. I’m hoping to play one of the superhero characters that’s coming from Marvel.” – Tom Lister Jr. 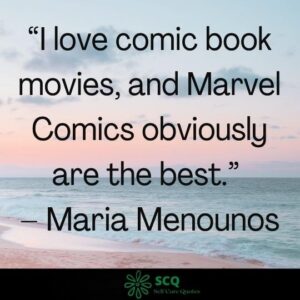 18. “When you’re a kid, you assume your parents are soulmates. My kids are gonna be right about that.”– Pam Beesly

22. “Happiness is anyone, and anything, at all, that’s loved by you.” – Charlie Brown

23. “My dearest friend, if you don’t mind, I’d like to join you by your side. Where we could gaze into the stars, and sit together, now and forever.” – Jack Skellington 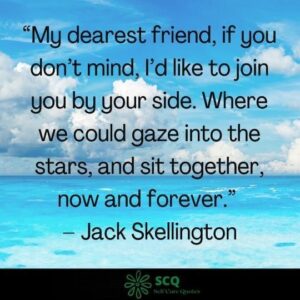 24. “I love you. You annoy me more than I ever thought possible, but I want to spend every irritating minute with you.” – Turk

25. “I love other movies that have been made since but I think more than any comic book movie, ‘Superman’ just totally seemed to capture superheroes in ways that others have not.” – Brian K. Vaughan

26. “It’s not always the style of tattooing but rather the subject matter that drives me. I love tattooing anything from mythology to comic book superheroes.” – William Webb

27. “Obviously, I love superheroes; I love comic book characters, but I … I guess I’ve had a lifelong affection for comics, and while I love the characters so much, I also love the medium.” – Marc Guggenheim

28. You may find interesting – Top 57 Ironic Quotes About Love That Will Make You Laugh! “When I’m around you, my mind is no longer my own.” – Crazy Anakin

31. “I cannot preach hate and warfare when I am a disciple of peace and love!” – Wonder Woman

32. “I’d rather not rule the earth. I just want to marry the girl next door and live in the suburbs.” – Captain Dynamo

33. “…love is not a constantly stable factor, it’s (a decision you’ll) have to make again and again.” – Black Panther 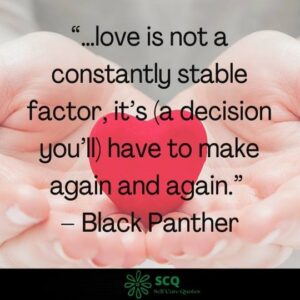 34. “They were young. They were in love. They were heroes.” – Narration about Jean Grey and Cyclops

35. “Paradise unearned is but a land of shadows!.” – The Silver Surfer

36. “In brightest day, in blackest night, no evil shall escape my sight.” – Green Lantern

37. “I should break your face for that, but that would not teach you of love.” – Slaughterman

38. “When you look in her eyes and she’s looking back in yours… everything… feels… not quite normal.” – Peter Parker

39. “This is true love – you think this happens everyday?” – Westley

40. Intimacy is the most important thing for lovers and for a good relationship. We have a stunning writing about intimacy. Don’t forget to check it – 80+ Best Intimacy Quotes

41. “I guess I kind of hate most things, but I never really seem to hate you.” – April Ludgate

42. “You gotta take a chance on something sometime.” – Jim Halpert

43. “I never told you, but sometimes when I’m at work, I think of you and smile.” – Homer Simpson

44. “I’d love to see a good script of one of my books, in these years of animations and comic book sequels, and had so many written over the years, but none quite clicked.” – Carl Hiaasen

48. “Alan shrugged. “I love the CBC, really, but being voted its president – ” “Co-president,” Sputnik corrected. ” – is kind of like being declared King of Nerds.” “Co-king,” Sputnik asserted.” – J.M. Richards

49. “I love comic books. I was weaned on them, so it’s not like it’s a stretch for me, but I have other interests, as well.” – David S.Goyer

50. “I also love the zombie genre, my zombie fandom going way back to ‘Night of the Living Dead.’ And ‘The Walking Dead’ is truly the ultimate representation of that sensibility in the comic book genre.” – Gale Anne Hurd 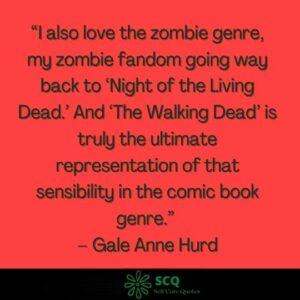