1. “My life is like a stroll upon the beach, as near to the ocean’s edge as I can go.” – Henry David Thoreau

2. “To escape and sit quietly on the beach – that’s my idea of paradise.” – Emilia Wickstead

4. “I have an immoderate passion for water; for the sea, though so vast, so restless, so beyond one’s comprehension.” – Guy de Maupassant

5. “The sea knows no limits, makes no concessions. It has given us everything and it can take everything away from us.” – John Ajvide Lindqvist

6. “If peace flows like a river, may it flow into the ocean of our souls.” – J. Autherine

8. “You can’t cross the ocean of life just by dreaming about it, you have to jump in and swim.” – Debasish Mridha 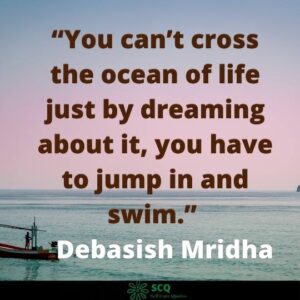 9. “The ocean is a mighty harmonist.” – William Wordsworth

10. “Water is one of the most basic of all needs – we cannot live for more than a few days without it. And yet, most people take water for granted. We waste water needlessly and don’t realize that clean water is a very limited resource. More than 1 billion people around the world have no access to safe, clean drinking water, and over 2.5 billion do not have adequate sanitation service. Over 2 million people die each year because of unsafe water – and most of them are children!” – Robert Alan Aurthur

11. “All living beings, things that move, are equally important, whether they are human beings, dogs, birds, fish, trees, ants, weeds, rivers, wind or rain. To stay healthy and strong, life must have clean air, clear water and pure food. If deprived of these things, life will cycle to the next level, or as the system says, ‘die’.” – John Africa

12. “If you don’t change direction, you end up where you are headed.” – John Gibbons

13. “When your consciousness has become ripe in true zazen-pure like clear water, like a serene mountain lake, not moved by any wind-then anything may serve as a medium for realization.” – Matsuo Basho

14. “Now she realized that she was not peering at a so-dark-blue-it-looked-black ocean, but rather she was looking straight through miles of incredibly clear water at something enormous and black in its nethermost depths. Maybe it was the bottom – so deep that not even light could touch it. And yet, down in those impossible depths, she thought she could see tiny lights sparkling. She stared uncertainly at the tiny glimmerings. They seemed almost like scattered grains of sand lit from within; in some places they clustered like colonies, faint and twinkling. Like stars.” – Fuyumi Ono

15. “If you do not change direction, you may end up where you are heading.” – Laozi

16. “Like silence after noise, or cool, clear water on a hot, stuffy day, Emptiness cleans out the messy mind and charges up the batteries of spiritual energy. Many people are afraid of Emptiness, however, because it reminds them of Loneliness.” – Benjamin Hoff

17. “When the mind is turbulent, uncontrolled and restless, it is like a pond of water that is filled with mud. Therefore when we look within ourselves, all we perceive is the mud of our material conceptions of life. But when the mind is still through discipline, and through yoga, it is like a pond that has no waves and no turbulence. Then we can perceive through that crystal clear water the eternal nature of our soul.” – Radhanath Swami

18. “In Lily’s eyes her beautiful clear water eyes is what I have sought and never found, wanted and never had, hoped for and never discovered. Love.” – James Frey

19. “The word of God came down to man as rain to soil, and the result was mud, not clear water.” – Kim Stanley Robinson

20. “How wonderful is Cold Mountain Climbers are all afraid The moon shines on clear water twinkle twinkle Wind rustles the tall grass Plum trees flower in the snow Bare twisted trees have clouds for foliage A touch of rain brings it all alive Unless you see clearly do not approach.” – Hanshan

22. “I am pleased enough with the surfaces – in fact they alone seem to me to be of much importance. Such things for example as the grasp of a child’s hand in your own, the flavor of an apple, the embrace of a friend or lover, the silk of a girl’s thigh, the sunlight on the rock and leaves, the feel of music, the bark of a tree, the abrasion of granite and sand, the plunge of clear water into a pool, the face of the wind – what else is there? What else do we need?” – Edward Abbey

23. “A beach is not only a sweep of sand, but shells of sea creatures, the sea glass, the seaweed, the incongruous objects washed up by the ocean.” – Henry Grunwald

24. “Individually we are one drop. Together we are an ocean.” – Ryunosuke Satoro

26. “The ocean stirs the heart, inspires the imagination and brings eternal joy to the soul.” – Robert Wyland 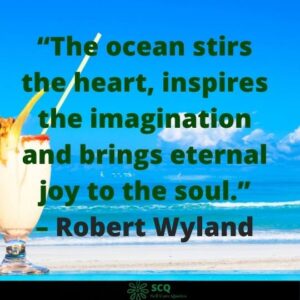 27. “We dream in colors borrowed from the sea.” – Unknown

28. “Advice from the Ocean: Be shore of yourself. Come out of your shell. Take time to coast. Avoid pier pressure. Sea life’s beauty. Don’t get so tide down on work that you miss out on life’s beautiful waves.” – Unknown

29. “Because there’s nothing more beautiful than the way the ocean refuses to stop kissing the shoreline, no matter how many times it’s sent away.” – Sarah Kay

32. “Life takes you down many paths but my favorite ones lead to the beach.” – Unknown

35. “Only at the beach can we go splishin’ and a splashin.” – Kate Summers

37. “Time wasted at the beach is time well spent.” – Unknown

40. “The ocean is a central image. It is the symbolism of a great journey.” – Enya 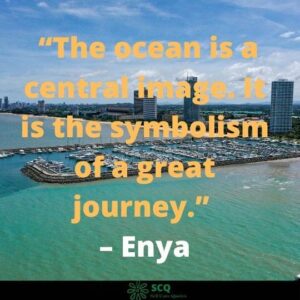 41. “She loves the serene brutality of the ocean, loves the electric power she felt with each breath of wet, briny air.” – Holly Black

42. “Being out there in the ocean, God’s creation, it’s like a gift He has given us to enjoy.” – Bethany Hamilton

43. “Waves tossed themselves against the shore, dragging grit and sand between their nails as they were slowly pulled back out to sea.” – Holly Black

44. “The ocean is everything I want to be. Beautiful, mysterious, wild, and free.” – Unknown

45. “My soul is full of longing for the secret of the sea. And the heart of the great ocean sends a thrilling pulse through me.” – Henry Wadsworth Longfellow

46. “Be alone with the sea for it is there you will find answers to questions you didn’t realize exist.” – Khang Kijarro Nguyen 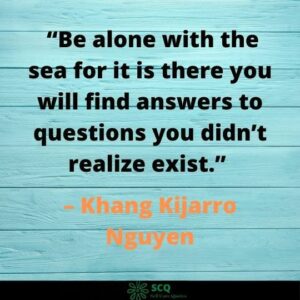 47. “I love the ocean. I’ve always liked the blue, so tranquil and peaceful and gliding. And the fear of it.” – Siouxsie Sioux

48. “I pray to be like the ocean, with soft currents, maybe waves at times. More and more, I want the consistency rather than the highs and the lows.” – Drew Barrymore 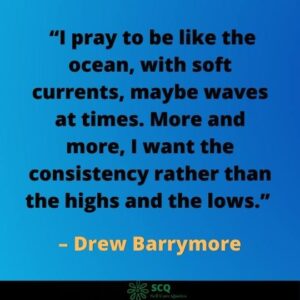 49. “Let the waves carry you where the light can not.” – Mohit Kaushik

50. “We know only too well that what we are doing is nothing more than a drop in the ocean. But if the drop were not there, the ocean would be missing something.” – Mother Teresa