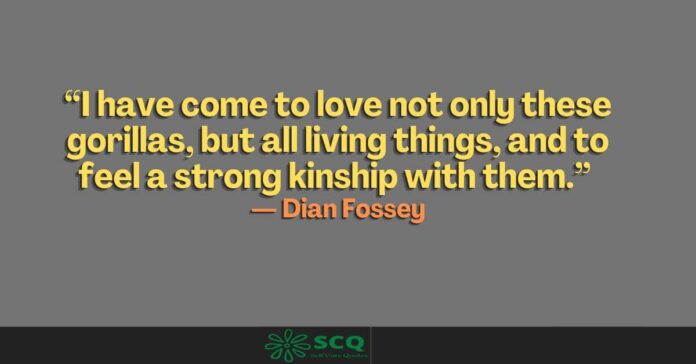 1. “I feel more comfortable with gorillas than people. I can anticipate what a gorilla’s going to do, and they’re purely motivated.” ― Dian Fossey

2. “One of the basic steps in saving a threatened species is to learn more about it: its diet, its mating, and reproductive processes, its range patterns, its social behavior.”― Dian Fossey 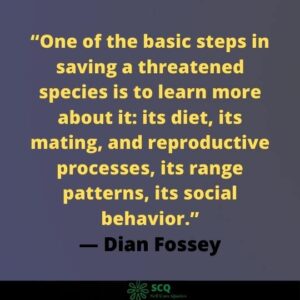 3. “It was their individuality combined with the shyness of their behavior that remained the most captivating impression of this first encounter with the greatest of the great apes.”― Dian Fossey

4. “There is something infinitely healing in the repeated refrains of nature, the assurance that dawn comes after night, and spring after winter.” ― Dian Fossey 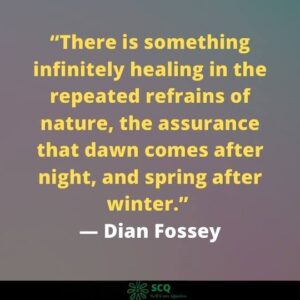 5. “I have come to love not only these gorillas, but all living things, and to feel a strong kinship with them.” ― Dian Fossey

6. “There was no way that I could explain to dogs, friends, or parents my compelling need to return to Africa to launch a long-term study of the gorillas. Some may call it destiny and others may call it dismaying. I call the sudden turn of events in my life fortuitous.”― Dian Fossey

7. “When you realize the value of all life you dwell less on past and concentrate more on the conservation of the future.”― Dian Fossey 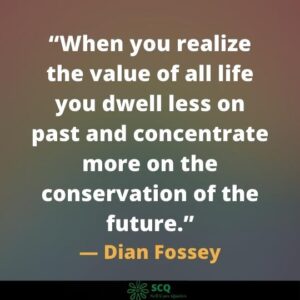 8. “The greatest danger to mountain gorillas is not from poachers or habitat loss, but from the ignorance of people who do not understand them.” ― Dian Fossey

9. “There is no greater reward than to know that one’s efforts have helped preserve the fragile balance of nature.” ― Dian Fossey 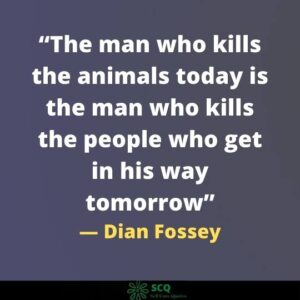 11. “The greatest danger to mountain gorillas is man.”― Dian Fossey

12. “There are times when one cannot accept facts for fear of shattering one’s being. As I listened to Ian’s news, all of Digit’s life, since my first meeting with him as a playful little ball of black fluff ten years earlier, passed through my mind. From that moment on, I came to live within an insulated part of myself.”― Dian Fossey

13. “I have no friends. The more you learn about the dignity of the gorilla, the more you want to avoid people.”― Dian Fossey 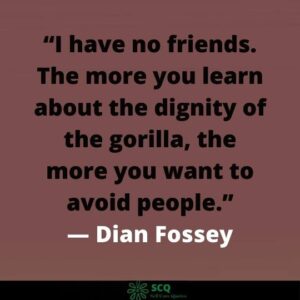