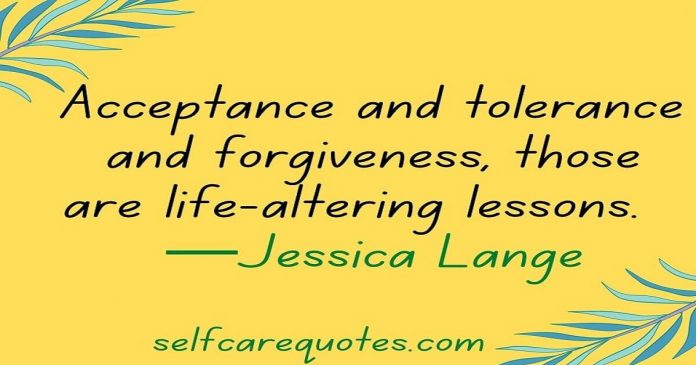 Who is Jessica Lange?

This actress has huge fame and a big showcase to keep her awards and crests. Because she is an actor who has won almost every award related to the film. Some of her most famous movies are “King Kong”, “Music Box”, “In Secret” etc. Jessica Lange’s talents are not invested only in acting. She is a deep thinker and a good speaker. Jessica Lange has a huge number of quotes. Jessica Lange quotes are the result of her thoughts.

1.  Acceptance and tolerance and forgiveness, those are life-altering lessons.  —Jessica Lange

2. It is an embarrassing time to be an American. It really is. It’s humiliating. —Jessica Lange

3. To work with a director that has emotional commitment and passion toward the characters, and the piece, and the experiences, it only enriches your work.—Jessica Lange

4. I am tortured when I am away from my family, from my children. I am horribly guilt-ridden.—Jessica Lange

5. Allow the diversity to exist. There is nothing wrong with it. Hell, we put up with the religious right-we can put up with transgendered human beings.—Jessica Lange

6. Be present. I would encourage you with all my heart just to be present. Be present and open to the moment that is unfolding before you. Because, ultimately, your life is made up of moments. So don’t miss them by being lost in the past or anticipating the future.—Jessica Lange

7. When you learn not to want things so badly, life comes to you.—Jessica Lange

8. Moments of pure happiness…come upon you unexpectedly. Don’t be too preoccupied to experience them.—Jessica Lange

10. I regret those times when I’ve chosen the dark side. I’ve wasted enough time not being happy.—Jessica Lange

11. Don’t be absent from your own life.—Jessica Lange

12. The natural state of motherhood is unselfishness. When you become a mother, you are no longer the center of your own universe. You relinquish that position to your children.—Jessica Lange

14. One of the things I love about acting is that it reveals a certain something about yourself, but it doesn’t reveal your own personal story.—Jessica Lange

15. I love men. I’ve always been drawn to poets, artists, and madmen. Sometimes all three in one—Jessica Lange

16. I have a life that’s just been a well of loneliness.—Jessica Lange

17. It’s easy to judge, to think we know for certain the right thing to do. Sometimes, it just isn’t so clear.—Jessica Lange

18. For me, acting was always a way to explore emotions – to dip into the well and really try to reach rock bottom down there. That was the most exciting part of it. I hadn’t found anything that really allowed me to do that until I came upon acting.—Jessica Lange

19. If Ive got a clean pair of jeans and a T-shirt, thats usually a good day for me.—Jessica Lange

20. I have always followed the most passionate course.—Jessica Lange

21. American Horror Story re-energized me; it re-energized my career. There’s no shame in recognizing that. It’s exposed me to a whole new generation, which is a little strange. I’m not used to young people thinking I’m cool.—Jessica Lange

22. All through life I’ve harbored anger rather than expressed it at the moment.—Jessica Lange

23. I want to live my life with no goals anymore, but just completely free, like I did when I was younger.—Jessica Lange

25. I am tortured when I am away from my family, from my children. I am horribly guilt-ridden.—Jessica Lange

26. Allow the diversity to exist. There is nothing wrong with it. Hell, we put up with the religious right-we can put up with transgendered human beings.—Jessica Lange

27. If I had to start over, I’d pursue photography – probably to the exclusion of acting.—Jessica Lange

28. we must remain hopeful that for our children and our children’s children, that we are not a warring nation, but we will embrace and practice true compassion and honor the ideals of peace and freedom, and we will not give up.—Jessica Lange

29. I worked on my voice for ‘Sweet Dreams’ but only to match my speaking voice to Patsy’s actual singing voice. That was my way into that character.—Jessica Lange

30. As an actor, you have to have trust and believe that somebody is taking care of you or watching your back. With a part like this, especially with where we’re going with it, I can’t pull any punches. I can’t do it halfway, especially when you’re dealing with madness and this descent into madness.—Jessica Lange

31. This idea of selfishness as a virtue, as opposed to generosity: That, to me, is unnatural.—Jessica Lange

32. I do love acting. But to work as a photojournalist would have been extraordinary.—Jessica Lange

33. I’ve been thinking a lot about next year, which will be the first time in 25 years that I don’t have a child at home.—Jessica Lange

35. Because Shakespeare’s language is so expansive, we’re under this misconception that it’s difficult. But I discovered that it’s easy because it’s so brilliantly written. The words are perfect, and the language is intelligent and very emotional.—Jessica Lange

36. Digital doesn’t interest me. It’s too many steps removed from the actual tactile thing. I still read books. I don’t read online.—Jessica Lange

37. I have been a waitress, and I was a damn fine waitress too, let me tell you.—Jessica Lange

38. That’s always been like a fascination to me – watching my family, three sisters and a brother and all growing up basically in the same situation and each one being so totally different and going on to completely different areas and directions. But for me to go into psychoanalysis really steadily, would be putting too much energy into trying to figure out why I am the way I am… Basically this is how I am and it’s alright and I don’t want to know why I’m this way.—Jessica Lange

39. I am coming to the end of acting. I have a list: another stage production, maybe one or two more movies, one more season of American Horror Story. . . and then that is it for me. Because I think that’s enough. I want to go out with a bang. . . or should I say, a scare?—Jessica Lange

40. I never think of the future. I never imagine what comes next.—Jessica Lange

41. Sometimes the odds are against you-the director doesn’t know what the hell he’s doing, or something falls apart in the production, or you’re working with an actor who’s just unbearable.—Jessica Lange

42. Successful model? That’s a myth. The year I modeled was the most painful year of my life. Editors would always talk to you in the third person as though you were merely a piece of merchandise.—Jessica Lange

43. In families there is always the mythology. My father died when my kids were quite young still, and yet they still tell his stories. That is how a person lives on.—Jessica Lange

44. Once I started on ‘Frances’ I discovered it was literally a bottomless well. It devastated me to maintain that for eighteen weeks, to be immersed in this state of rage for twelve to eighteen hours a day. It spilled all over, into other areas of my life.—Jessica Lange

46. I never just slide through anything. I explore everything to the fullest, whether good or bad.—Jessica Lange

47. I’ve got nothing left to lose at this point. The work I’ve done is out there.—Jessica Lange

48. There was that feminist myth that we can do everything. I don’t think you can.—Jessica Lange

49. At certain times you really feel as though you have to do something.—Jessica Lange

50. Families survive, one way or another. You have a tie, a connection that exists long after death, through many lifetimes.—Jessica Lange

Biography is a good way to know about a person. Jessica Lange’s life is very interesting and the story of her success also makes people happy. So, let’s read about her life.

Jessica Lange is from Cloquet, Minnesota. Her birth time was 20 April 1949. The parents name of this actor is Albert John Lange and Dorothy Florence. Jessica Lange’s father is a teacher and a traveling salesman. For her father’s profession, the family had to move to several places in the childhood of Jessica Lange. For this reason, the mentality of Jessica Lange was formed in this way. Jessica Lange’s sisters and her parents helped her to become an actor.

As I already said, Jessica Lange’s family moved to several places in her childhood. For that frequent movement, her study hampered. The elementary and high school education-related information about Jessica Lange is not known to anyone. But she attended the University of Minnesota, after getting a scholarship. But she did not complete her study here for her traveling mind. Later Jessica Lange studied acting.

Finally, we can remark that life, education, and everything Jessica Lange has is related to acting. Jessica Lange’s other specialties are also worth mentioning. Among these, her quotes make her a remarkable figure. Jessica Lange quotes should be followed by us.