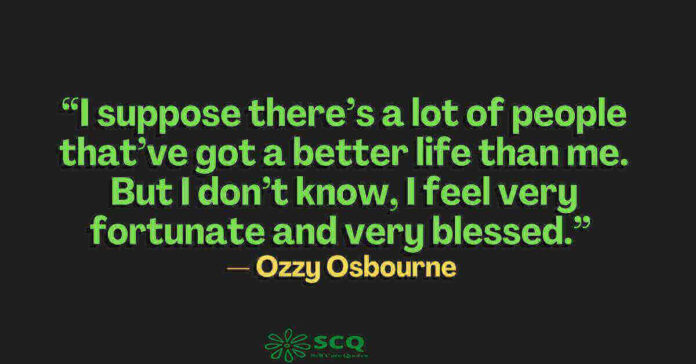 1. “If you can laugh at your mistakes, it’s a good thing.” — Ozzy Osbourne

2. “Hating people isn’t a productive way of living. So what’s the point in hating anyone? There’s enough hate in the world as it is, without me adding to it.” — Ozzy Osbourne

3. “People say it’s hard at the top, but it’s even harder at the bottom.” — Ozzy Osbourne

5. “You learn who your friends are when the sh-t hits the fan.” — Ozzy Osbourne

6. “It’s all part of my journey – I’ve done a lot of stupid things, but you learn by your mistakes.” — Ozzy Osbourne

7. “Randy [Rhoads] was laid to rest at a place called Mountain View Cemetery, where his grandparents were buried. I made a vow there and then to honor his death every year by sending flowers. Unlike most of my vows, I kept it. But I’ve never been back to his graveside. I’d like to go there again one day before I finally join him on the other side.” — Ozzy Osbourne

9. “Jesus Christ was the original rock’n’roll star. He gave people reasons to live in the rut they were living in. He was the first man to say, “You don’t have to have human sacrifices, ’cause human sacrifices hurt somebody, you know?” Just believe in the spirit that is within you.” — Ozzy Osbourne

11. “I keep hearing this [expletive] thing that guns don’t kill people, but people kill people. If that’s the case, why do we give people guns when they go to war? Why not just send the people?” — Ozzy Osbourne

12. “My stay in Camp Betty was the longest I’d been without drink or drugs in my adult life. […] At first, they put me in a room with a guy who owned a bowling alley, but he snored like an asthmatic horse, so I moved and ended up with a depressive mortician. […] The mortician snored even louder than the bowling alley guy – he was like a moose with a tracheotomy.” — Ozzy Osbourne

13. “Did you know that the percentage of young people in the crucial ‘youthquake’ age bracket of 15 to 24 was higher in 1973 than in 1967 ? Therefore it was glam rock that ended the war in Vietnam.” — Ozzy Osbourne

14. “Tony Iommi – the undisputed king of demonic heavy rock riffs. In this area, no one had never surpassed him.” — Ozzy Osbourne 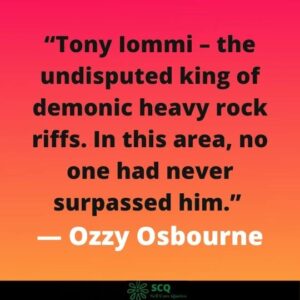 15. “You gotta be really careful what you bite off. Don’t bite off more than you can chew. It’s a dangerous world.” — Ozzy Osbourne

17. “When I was doing drugs and alcohol, I thought I’ll have a drink and a line of this and I’ll smoke this. I didn’t go, ‘Then I’m going to go out and get drunk, come back strangle my wife and wake up in jail on charges of attempted murder,’ but that’s what happened. I’m not telling people what to do. If they can enjoy doing it and they get on with it and they can handle it fine, but don’t involve me. I’m lucky to be alive; you’re playing with Russian roulette.” — Ozzy Osbourne

18. “The most unbelievable thing about my behaviour is that I was convinced it was entirely f**king normal.” — Ozzy Osbourne

20. “How can you go on stage and shout ‘Yeah! Rock’n’roll forever!’ and then go to bed at 10 o’clock with a nightcap on, a candle in your hand and a Bible under your arm?” — Ozzy Osbourne

21. “The Jesus freaks were the worst. While the ‘Suicide Solution’ case was going through the courts they followed me around everywhere. They would picket my shows with signs that read, ‘The Anti-Christ Is Here’. And they’d always be chanting: ‘Put Satan behind you! Put Jesus in front of you!’ One time, I made my own sign – a smiley face with the words ‘Have a Nice Day’ – and went out and joined them. They didn’t even notice. Then, just as the gig was about to start, I put down the sign, said, ‘See ya, guys,’ and went back to my dressing room.” — Ozzy Osbourne

22. “I suppose there’s a lot of people that’ve got a better life than me. But I don’t know, I feel very fortunate and very blessed.” — Ozzy Osbourne

24. “I remember one night in Memphis, I’d come out of a blackout, and I didn’t know where I was. I’m feeling through the darkness – I was asleep in the middle of a freeway. I went up to this car in the darkness, and it was a cop car.” — Ozzy Osbourne Quotes

25. “I have a genuine love affair with my audience. When I’m on stage they’re not privileged to see me. It’s a privilege for me to see them.” — Ozzy Osbourne

26. “As long as there are kids who are pissed off and have no real way in venting out that anger, heavy metal will live on.” — Ozzy Osbourne

28. “Let me explain something to you – you have not been standing in front of thirty thousand decibals for thirty-five years – write me a note!” — Ozzy Osbourne

29. “I don’t want you to play me a riff that’s going to impress Joe Satriani; give me a riff that makes a kid want to go out and buy a guitar and learn to play.” — Ozzy Osbourne

31. “Maybe it’s not too late to learn how to love and forget how to hate.” — Ozzy Osbourne

32. “You’ve got to try and take things to the next level, or you’ll just get stuck in a rut.” — Ozzy Osbourne

34. “You’ve got to believe in yourself, or no one will believe in you. Imagination is like a bird on the wing, flying free for you to use.” — Ozzy Osbourne

35. “I can honestly say, all the bad things that ever happened to me were directly, directly attributed to drugs and alcohol. I mean, I would never urinate at the Alamo at nine o’clock in the morning dressed in a woman’s evening dress sober.” — Ozzy Osbourne

37. “When you’re in love, it’s not just about the messing around in the sack, it’s about how empty you feel when they’re gone.” — Ozzy Osbourne 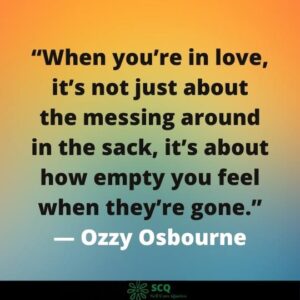 38. “My son Jack just got out of rehab, he’s 17 years old and he got hooked on Oxycontin and I’m just a little pissed off that he never gave me a few.” — Ozzy Osbourne

40. “I was curious, given the swimming pools of booze I’ve guzzled over the years – not to mention all of the cocaine, morphine, sleeping pills, cough syrup, LSD, Rohypnol… there’s really no plausible medical reason why I should still be alive. Maybe my DNA could say why.” — Ozzy Osbourne

41. “I used to get upset by people not understanding me, but I’ve made a career out of it now.” — Ozzy Osbourne 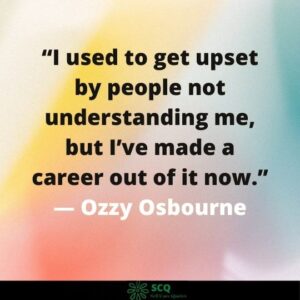 42. “I grew up having to piss in a bucket ’cos there was no indoor shitter, and now I have these computerized Japanese super-loo things that have heated seats and wash and blow-dry your arse at the touch of a button. Give it a couple of years and I’ll have a bog with a robot arm that pulls out my turds, so I don’t have to strain.” — Ozzy Osbourne

43. “I’m a lunatic by nature, and lunatics don’t need training – they just are.” — Ozzy Osbourne

44. “There are no impossible dreams.” — Ozzy Osbourne

45. “My father always said I would do something big one day.’ I’ve got a feeling about you, John Osbourne,’ he’d tell me after he’d had a few beers.’ You’re either going to do something very special, or you’re going to go to prison.’ And he was right, my old man. I was in prison before my eighteenth birthday.” — Ozzy Osbourne 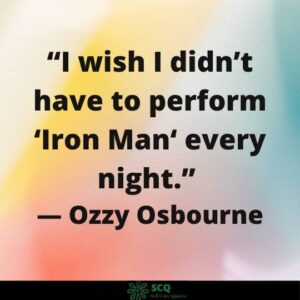 48. “Sabbath were a hippy band. We were into peace.” — Ozzy Osbourne 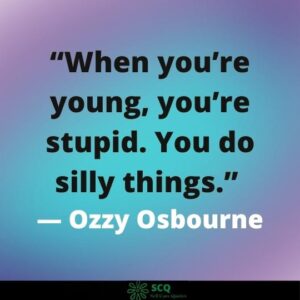 50. “Do you know what causes low voter turnout in America? It’s the result of having the fate of our nation at stake. This began with the bitter presidential election of 1828, which pitted the education, cultivation, and puritan constraint of John Quincy Adams against the yahoo populism of Andrew Jackson, thereby deciding permanently whether America would become a shining city upon a hill or an overlighted strip mall along a highway.” — Ozzy Osbourne