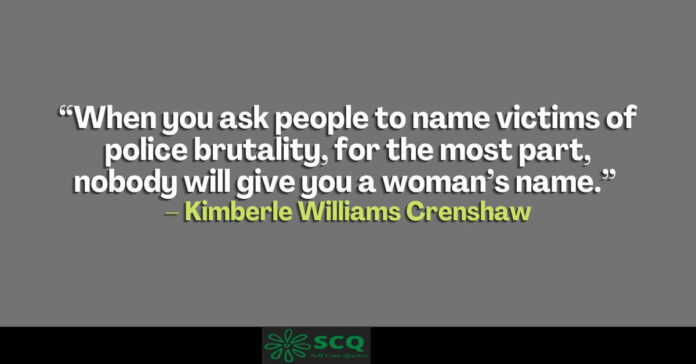 1. “When you ask people to name victims of police brutality, for the most part, nobody will give you a woman’s name.” – Kimberle Williams Crenshaw

2. “We loathe mass incarceration. We loathe police brutality. But most of us have absolutely no idea how to address the critical flaws in our justice system.” – Shaun King 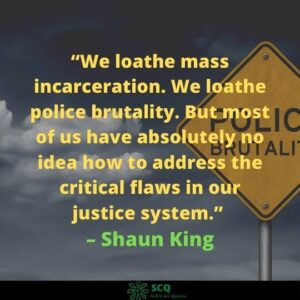 3. “The truth is that the police reflect America in all of its will and fear, and whatever we might make of this country’s criminal justice policy, it cannot be said that it was imposed by a repressive minority.” ― Ta-Nehisi Coates

4. “Most middle-class whites have no idea what it feels like to be subjected to police who are routinely suspicious, rude, belligerent, and brutal.” – Dr. Benjamin Spock

6. “Under Democratic presidents and Republican presidents, we have had for 40 years an unrelenting tide of police abuse against African Americans.” – Van Jones

7. “The losers under this injustice system are the young people I know and love.”— Mariame Kaba

8. “It is often easier to become outraged by injustice half a world away than by oppression and discrimination half a block from home.” – Carl T. Rowan

9. “Find out just what any people will quietly submit to and you have the exact measure of the injustice and wrong which will be imposed on them.” – Frederick Douglass

11. “To sin by silence, when they should protest, makes cowards of men.” – Ella Wheeler Wilcox

12. “How wonderful it is that nobody need wait a single moment before starting to improve the world.” ― Anne Frank

13. “To protest against injustice is the foundation of all our American democracy.” – Thurgood Marshall

15. “We were unarmed, but we knew that blackness armed us, even though we had no guns.” – Ibram X

16. “Humankind seems to have an enormous capacity for savagery, for brutality, for lack of empathy, for lack of compassion.” – Annie Lennox 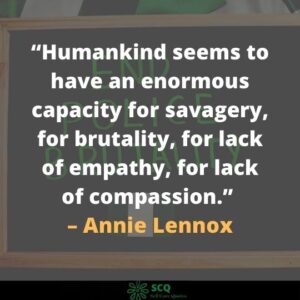 17. “Don’t denounce our pain as savage. What’s savage is the cruel inhumanity and brutality of the police. Condemn that.” – Amandla Stenberg

18. “The person who is brutally honest enjoys the brutality quite as much as the honesty. Possibly more.” – Richard J. Needham

19. “If the only time you have a public opinion on civil violence in this country is when police face harm or sadly, death, then you come across as disingenuous, your intentions, suspicious, and your perspective, riddled with bias and prejudice. Empathy is not a limited resource.” — Kovie Biakolo

20. “We have seen communities cry out in pain, generation after generation, because of racism and police brutality.” – Jaime Harrison 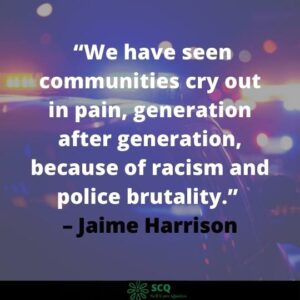 21. “One could laugh at the world better if it didn’t mix tender kindliness with its brutality.” – D. H. Lawrence

22. “It is only our humanity that can deliver us from the brutality of our achievements.” – Henry Rollins

23. “There’s nothing but brutality and bravery or cowardice that comes out of war. That’s pretty much it.” – Michael Cimino

24. “Freddie Gray was a story I followed closer than others, for whatever reason, in this larger narrative of police brutality.” — Stephen Malkmus 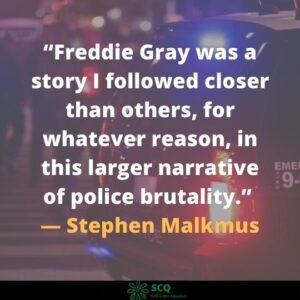 25. “If I win and get the money, then the Oakland Police department is going to buy a boys’ home, me a house, my family a house, and a Stop Police Brutality Center.” — Tupac Shakur

26. “You have to know the forces that are against you and that are trying to break you down. We talk about the problems facing the black community: the decimation of the black family; the mass incarceration of the black man; we’re talking about the brutality against black people from the police. The educational system.” — D’Angelo

27. “Just because I was at an anti-police brutality protest, doesn’t mean I’m anti-police. We want justice, but stop shooting unarmed people.” – Quentin Tarantino 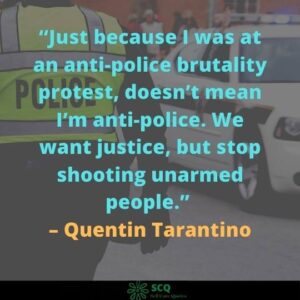 28. “Understand, our police officers put their lives on the line for us every single day. They’ve got a tough job to do to maintain public safety and hold accountable those who break the law.” –Barack Obama

29. “Police officers know that each time they put on their uniform, they are taking on risks to protect others.” –Mike Parson

30. “Very few police officers are ever held accountable for even the most egregious shootings and acts of violence.” – Shaun King

31. “Police officers put the badge on every morning, not knowing for sure if they’ll come home at night to take it off.” –Tom Cotton

32. “Our police officers are on the front line of a battle to maintain control of our streets.” –Priti Patel

34. “Every day, in every city and town across the country, police officers are performing vital services that help make their communities safer.” –Eric Schneiderman

35. “Being a good police officer is one of the most difficult, dangerous, idealistic jobs in the world.” –Thomas Hauser

36. “Each day, millions of police officers do the selfless work of putting their lives on the line to protect civilians, frequently responding to or preventing crises completely with no recognition.” –Letitia James

37. “People see police officers and think they’re such bad people. We have some who can be some bad people. But we have some great ones out there, that are here to protect us.” –Ha Ha Clinton Dix

38. “Brutality of brutal people reached to personal attacks; it was the result of my tolerance.” — Ehsan Sehgal

39. “I think police brutality has been going on since – I don’t know – ever since I can remember and, you know, hearing about it in my childhood.” — Goapele

41. “If you are neutral in situations of injustice, you have chosen the side of the oppressor.” – Desmond Tutu

42. “White feelings should never be held in higher regard than black lives.”— Rachel Cargle

43. “Don’t make the mistake of thinking that you have to agree with people and their beliefs to defend them from injustice.” – Bryant H. McGill

46. “There may be times when we are powerless to prevent injustice, but there must never be a time when we fail to protest.” – Elie Wiesel

47. “It is better to protest than to accept injustice.” – Rosa Parks

48. “When an individual is protesting society’s refusal to acknowledge his dignity as a human being, his very act of protest confers dignity on him.” – Bayard Rustin

49. “I have always appreciated the honest brutality of the international film world. One need never doubt one’s worth in the market.” — Ingmar Bergman

50. “The highways of sadistically unending brutality were gustily inundated with an infinite dividers of limited indiscriminate and tyrannically lambasting hatred.” — Nikhil Parekh