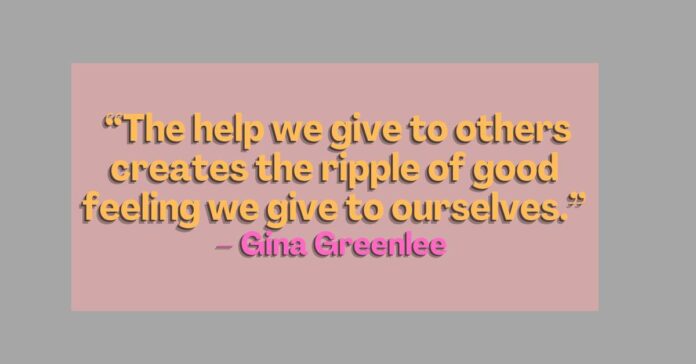 1. “I think that once you open the door and allow people in on a certain aspect, it’s very hard to then control how far that ripple effect is. So I think that the person who is known or famous has the ability to decide what they do or don’t want to share.” – Rosie O’Donnell

2. “Acts of sacrifice and decency without regard to what’s in it for you create a ripple effect. Ones that lift up families and communities, that spread opportunity.” – Barack Obama

3. “Having a vested interest in other souls unconditionally creates a ripple effect that produces miracles in the lives of those around us.” – Molly Friedenfeld, The Book of Simple Human Truths

4. “Never underestimate the valuable and important difference you make in every life you touch for the impact you make today has a powerful rippling effect on every tomorrow.” – Leon Brown

5. “One small step, one small act will create a ripple. You may not always see its effect from the middle of the pond, but it’s there. Drop some love, some laughter, or some kindness into the water and see what happens..”

6. “Each one of us is like that butterfly the Butterfly Effect. And each tiny move toward a more positive mindset can send ripples of positivity through our organizations our families and our communities.” – Shawn Achor

7. “We all get damned in our lives, and there are ripple effects. One thing can determine a life, and it’s hard to overcome that if the event is really traumatic. Your life is completely condemned by it.” – Matthias Schoenaerts

8. “You can never know how many lives you’ve touched, so just know it’s far more than you think. Even the tiniest acts of love, kindness, and compassion can have a massive ripple effect. You have made the world a better place, even if it doesn’t seem like.”

10. “Be the person who creates positive ripple effects.” – Camilla Kragius 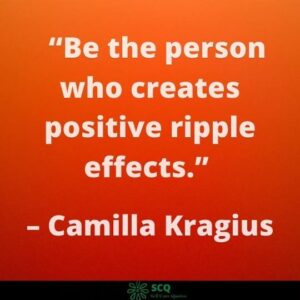 11. “Be the compromise you want to see in the world.” – Mahatma Gandhi

12. “Amazing to think that everything we do has a ripple effect we’re not aware of.” – Red Phoenix

14. “You can never know the ripple effect you create with one tiny gesture of kindness.” – Elle Sommer

15. “The help we give to others creates the ripple of good feeling we give to ourselves.” – Gina Greenlee 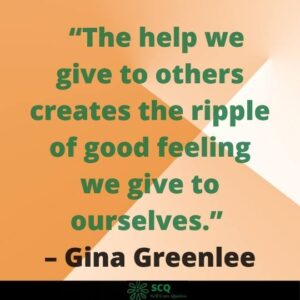 16. “The assumption that change has to start at the top is wrong. Start where you are.” – Jesse Lyn Stoner

18. “The ripple effect stemming from a single moment of love might be infinite in reach.” – Narissa Doumani

19. “You have no idea of the countless lives you touch in the course of your lifetime.” – Sarah Ban Breathnach

20. “Let everything we do and say be an expression of the beauty in our heart, always based on love.” – Don Miguel Ruiz

21.“When you do some good work and if it inspires others, then you have just created the ripple effect.” – Mohith Agadi 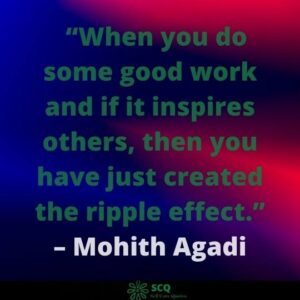 22. “Every loving word and action create a far reaching ripple effects – like the waves of the ocean.” – Swami Dhyan Giten

23. “We are all here for a reason. Be a source of love, and watch it create ripple effect around you.” – Michelle Maros

24. “Don’t underestimate the ripple effect of what you do. These kinds of actions have toppled empires.” – Leila Janah

25. Personal growth will cause a ripple effect as the growth in consciousness of enough people, one by one, can create general change, and lasting social improvements.” – Bud Harris

27. “Because we are a globally connected village, we need to remember that our choices are not isolated. They have a powerful ripple effect, and that ripple is global.” – Linda Fisher Thornton

28. “Everybody talks about wanting to change things and help and fix, but ultimately all you can do is fix yourself. And that’s a lot. Because if you can fix yourself, it has a ripple effect.” – Rob Reiner

29. “Throughout her life, she held firm to her belief that even the smallest acts of kindness and generosity by the least of us can cause a ripple effect to change the world.” – Nina Wirk, Human Again

31. “Courage has a ripple effect. Every time we choose courage, we make everyone around us a little better and the world a little braver. And our world could stand to be a little kinder and braver.” – Brene Brown

33. “Small acts of decency ripple in ways we could never imagine.” – Cory Booker

34. “Every precious drop of change has a ripple effect on the ocean.” – Trudy Vesotsky

35. “Every single thought and every single action creates a ripple effect. Be mindful…”
36. “You want to be the pebble in the pond that creates the ripples for change.” – Tim Cook

37. “While it may seem small, the ripple effects of small things is extraordinary.” – Matt Bevin

38. “You think you’re just a drop in the ocean… but look at the ripple effect one drop can make!”

39. “I alone cannot change the world, but I can cast a stone across the waters to create many ripples.” – Mother Teresa 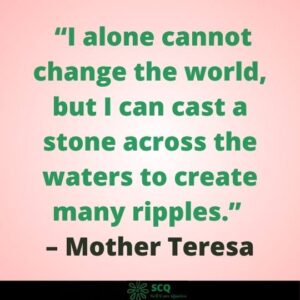 40. “It’s mind-boggling, how one small choice causes a ripple effect throughout the rest of your life.” – Monica Murphy

41. “Improvement is achieved by the ripple effect of a few simple changes in approach, attitude, or habit.” – Dale Ludwig

42. “The ripple effect could be so great and far reaching that it is difficult to calculate the full impact.” – Lorenzo Carmon

43. “Never underestimate the ripple effect of one act of obedience. It will never be all for nothing.” – Mark Batterson

44. “Remember there’s no such thing as a small act of kindness. Every act creates a ripple with no logical end.” – Scott Adams

45. “You have been created in order that you might make a difference. You have within you the power to change the world.” – Andy Andrews

46. “Even the smallest act of caring for another person is like a drop of water, it will make ripples throughout the entire pond.” – Bryan Matteo

47. “Just as ripples spread out when a single pebble is dropped into water, the actions of individuals can have far-reaching effects.” – Dalai Lama 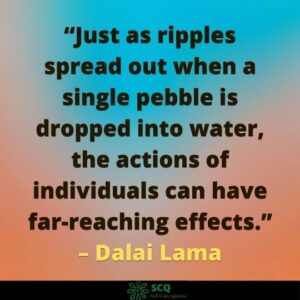 48. “These choices we make, they seem so small– they’re made in a split second and yet they can have a ripple effect for years.” – Heather McElhatton

49. “Use what you stand for and what you oppose as a foundation to write great content that resonates with readers and creates a ripple effect.” – Mark Twain

50. “A film can be undermined by the person you’re seeing it with, there in the dark, a ripple effect of attitude, scene by scene, shot by shot.” – Don DeLillo