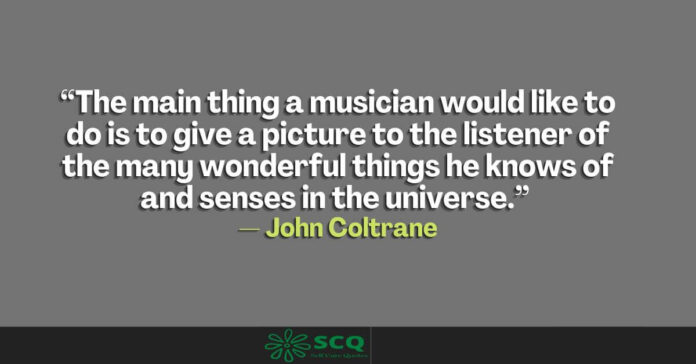 1. “The reason I play so many sounds, maybe it sounds angry, is because I’m trying so many things at one time, you see? I haven’t sorted them out. I have a whole bag of things that I’m trying to work through and get the one essential.” — John Coltrane

3. “The first time I heard Bird play, it hit me right between the eyes.” — John Coltrane

4. “Sometimes I wish I could walk up to my music as if for the first time, as if I had never heard it before. Being so inescapably a part of it, I’ll never know what the listener gets, what the listener feels, and that’s too bad.” — John Coltrane

5. “The main thing a musician would like to do is to give a picture to the listener of the many wonderful things he knows of and senses in the universe.” — John Coltrane

6. “I’d like to point out to people the divine in a musical language that transcends words. I want to speak to their souls.” — John Coltrane 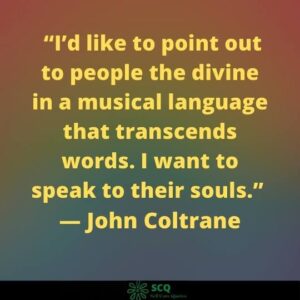 7. “Working with Monk is like falling down a dark elevator shaft.” — John Coltrane

8. “Any time you play your horn, it helps you. If you get down, you can help yourself even in a rock ‘n’ roll band.” — John Coltrane

10. “Don’t ever get so big or important that you can not hear and listen to every other person.” — John Coltrane

11. “We should pray and seek for knowledge which would enable us to portray and project the things we love in music, in a way that might wholly or in some part, be appreciated as having been conceived and composed or performed and presented with dedication and in positive taste.” — John Coltrane

12. “Sometimes I think I was making music through the wrong end of a magnifying glass.” — John Coltrane 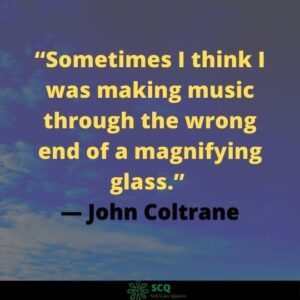 13. “You can play a shoestring if you’re sincere.” — John Coltrane

14. “All a musician can do is to get closer to the source.” — John Coltrane

15. “There is never any end. There are always new sounds to imagine; new feelings to get at. And always, there is the need to keep purifying these feelings and sounds so that we can really see what we’ve discovered in its pure state. So that we can see more and more clearly what we are. In that way, we can give to those who listen the essence, the best of what we are. But to do that at each stage, we have to keep on cleaning the mirror.” — John Coltrane

18. “I think I was first awakened to musical exploration by Dizzy Gillespie and Bird. It was through their work that I began to learn about musical structures and the more theoretical aspects of music.”

19. “Considering the great heritage in music that we have – the work of the giants of the past, the present, and the promise of those who are to come – I feel that we have every reason to face the future optimistically.” — John Coltrane

20. “After all the investigation, all of the technique-doesn’t matter! Only if the feeling is right.” — John Coltrane 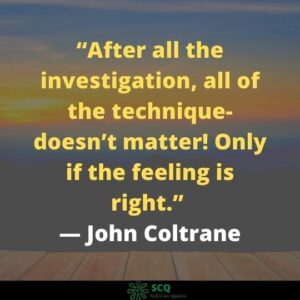 22. “Whatever I’d say would be an understatement. I can only say my life was made much better by knowing him. He was one of the greatest people I’ve ever known, as a man, a friend, and a musician.” — John Coltrane

23. “To be a musician is really something. It goes very, very deep. My music is the spiritual expression of what I am – my faith, my knowledge, my being… When you begin to see the possibilities of music, you desire to do something really good for people, to help humanity free itself from its hang-ups.” — John Coltrane

25. “Invest yourself in everything you do. There’s fun in being serious.” — John Coltrane

26. “My music is the spiritual expression of what I am: my faith, my knowledge, my being.” — John Coltrane

27. “I think music is an instrument. It can create the initial thought patterns that can change the thinking of people.” — John Coltrane 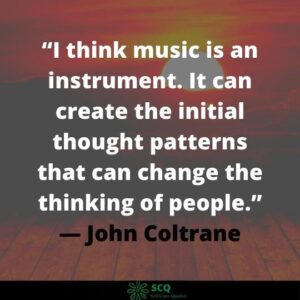 28. “I start in the middle of a sentence and move both directions at once.” — John Coltrane

29. “When you begin to see the possibilities of music, you desire to do something really good for people.” — John Coltrane

31. “Damn the rules, it’s the feeling that counts.” — John Coltrane

32. “I believe that men are here to grow themselves into the best good that they can be – at least, this is what I want to do.” — John Coltrane 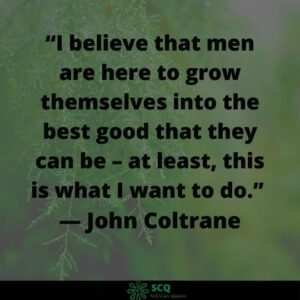 33. “I think the majority of musicians are interested in truth.” — John Coltrane