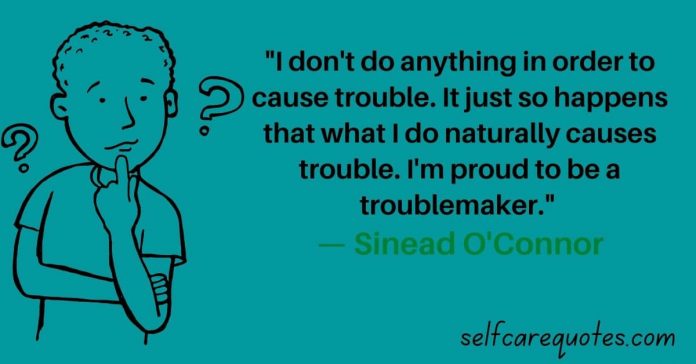 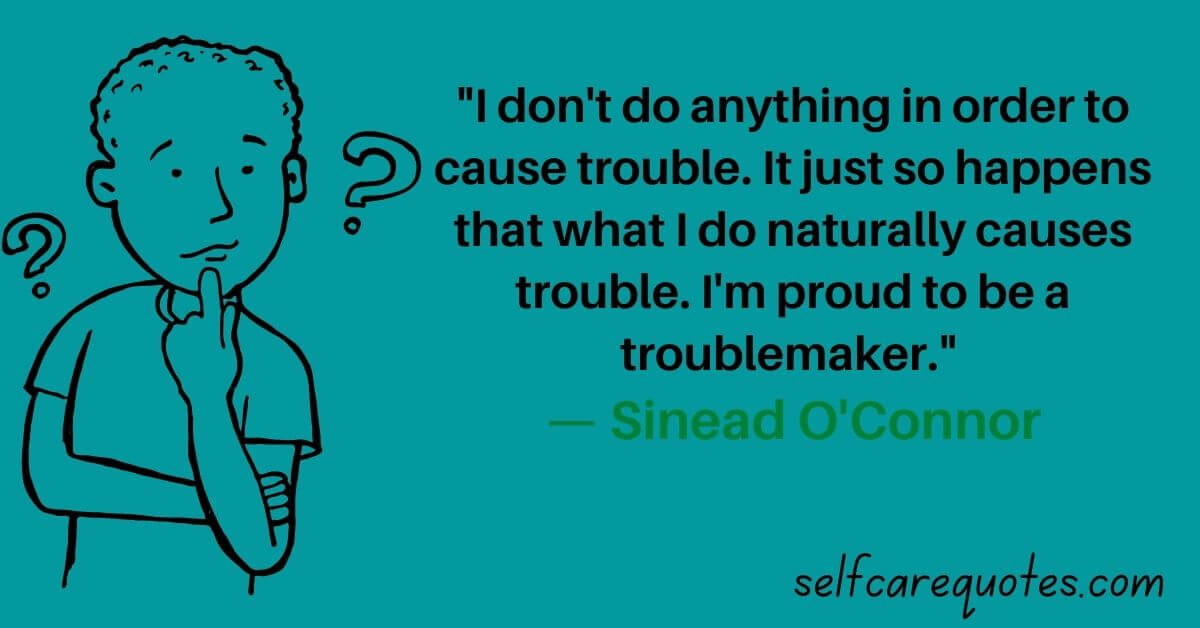 1. I don’t do anything in order to cause trouble. It just so happens that what I do naturally causes trouble. I’m proud to be a troublemaker. — Sinead O’Connor

6. Anger is the ultimate troublemaker. I feel you can express a strong disapproval or dislike of an object without losing your temper. —Dalai Lama

7. I wasn’t a troublemaker. I wasn’t impertinent. The teachers liked me. But year after year, the comments on my report cards basically came down to a single point, and it was 100% accurate: I seemed to get nothing whatsoever out of all those long hours spent in the classroom. —Tim Howard

8. I ruffle a lot of feathers. And I’m also selective – that makes you a troublemaker. But so be it. I laid a cornerstone for black actors, and that makes me happy. —Esther Rolle

9. I loved being a troublemaker. At Santa Monica High, I would smoke on campus, go barefoot, anything. —Dinah Manoff

10. I guess the point of that song ‘Troublemaker, Doppelganger’ is trying to navigate the worth of beauty and if it’s hurtful or helpful to value beauty. If it’s a curse or a blessing. Is that something really negative and morbid, like the hearse, or is it the limousine – a glamorous symbol of enjoying life? —Lucy Dacus

Quotes about troublemakers teach us many things to do with our life. We find negativity in the word “Troublemakers”. But all the time it is not negative. To some people, troublemakers are the changer of time and the fate of a country or a community.

If you go through all the quotes about troublemakers then you will get a clear idea about them. They are referred to as troublemakers for their way of working. Sometimes they might really be trouble makers.

12. Contrary to what some people may believe, I’m not a troublemaker. —August Alsina

13. People ended up not thinking much of me. They saw me as a bit of a troublemaker. It’s important to change people’s impressions. —Diego Costa

14. I was a born troublemaker and might as well earn a living at it.—Bill Mauldin

15. Christopher Hitchens was a wit, a charmer, and a troublemaker, and to those who knew him well, he was a gift from – dare I say it – God. —Graydon Carter

17. When I was in high school, I wasn’t a troublemaker. I didn’t get in fights. I was a good student and I had a lot of friends. —Thomas McDonell

18. All of them turned their backs on me at that time because they thought I was a troublemaker. —Fred Korematsu

19. I’ve got ADHD, and my whole life, people thought I was some kind of troublemaker because I had all this energy. —Yungblud

20. People make up things. If you ask the guys in this clubhouse I played with, I’ve never been a troublemaker. I don’t know where that came from. —Matt Kemp

21. It kills me to lose. If I’m a troublemaker, and I don’t think that my temper makes me one, then it’s because I can’t stand losing. That’s the way I am about winning, all I ever wanted to do was finish first. —Jackie Robinson

22. I was labeled a troublemaker, my mom an unfit mother, and I was not welcome anywhere. —Ryan White

23. I was a little troublemaker. Always trying to get in trouble, always mischief, like throwing rocks at cars when I was younger, all that kind of stuff. —Ryan Lochte

24. I was never a troublemaker, but I also was never a nerdy kid. I was never a cool kid or a sports kid. At lunchtimes, I never fit in with any cliques, so I’d end up just walking around the school by myself, listening to music. —Finn Jones

25. I was just a goofy little funny kid, who was always getting sent to the principal. It wasn’t serious because I was smart. I wasn’t like a true troublemaker, just rambunctious – like, talkative and trying to be funny. That was me in middle-school.— J. Cole

27. I was the troublemaker, always being funny – that’s just who I am. —Joan Smalls

29. I think we all attract troublemakers; I don’t think it’s particularly about anyone. I had it actually as an album title, and I thought it would be really cool to write a song about a girl that’s a bit of troublemaker. —Olly Murs

30. I was kind of a troublemaker, believe it or not. —Grace Potter

31. American record companies seem to feel I am antiwestern, anticapitalism, anti the kind of society they like. They think I’m a troublemaker.— Fela Kuti

32. I was a big troublemaker in the group. I put them through a lot of pain, but as much as I gave to them, they gave right back to me. —Dee Dee Ramone

33. I learned that if you’re going to be a troublemaker, you don’t want a ton of witnesses, because there’s inevitable fallout from living like you’re in ‘Lord of the Flies.’ —Natasha Lyonne

34. Brian was the oldest, I was in the middle and Carl was the baby. I was the troublemaker. Brian got great grades and Carl got the kind of grades I did. I failed everything. I was too busy fighting and running wild. —Dennis Wilson

35. As a militant troublemaker, I once wrote that it was the duty of every woman worthy of the description to upset men at least three times a day, on principle.— Julie Burchill

36. Whenever you write music, you want it to touch people on a certain level. I mean, I’ve been reading tweets about ‘Troublemaker’ and people saying ‘OMG, I can so relate to this – this is a guy that I fancy, or a girl that I fancy; it’s exactly like this person.’ —Olly Murs

37. My record was so bad that I was first rejected by the Peace Corps as a poor risk and possible troublemaker and was accepted as a volunteer only after a great deal of explaining and arguing. —Paul Theroux

38. I am interested in work that jumps boundaries, and that makes trouble. Part of me is comfortable with that: with being a bit of a troublemaker. —David Shields

39. Oh, I had my gothy phase, but I was never a troublemaker or anything like that. I was a little bit introspective, a little bit morbid. I was small for my age, so I was bullied and that kind of stuff. —Ariel Pink

40. ‘Troublemaker’ is not an adaptation of ‘Metro Girl’ or ‘Motor Mouth.’ It is an original story. The hardest part was probably trying to keep the sound true to the novels. I always write in first person, and it was important to us that the readers of ‘Metro’ and ‘Motor’ be comfortable with the change over to a graphic novel. —Janet Evanovich

41. Like ‘Metro’ and ‘Motor,’ ‘Troublemaker’ is written in first person. The only narration that happens is Barney speaking to the reader/thinking in her head. First person was a big challenge in the graphic novel because we want both men and women of all ages to enjoy ‘Troublemaker.’ —Janet Evanovich

42. I started karate in middle school when my parents wanted me to babysit my younger brother. He was a little troublemaker, so they wanted me to make sure the class was going okay. I ended up being way more into it than my brother. —Karen Fukuhara

Quotes About Troublemakers at Work

Quotes about troublemakers at work are also famous for the unpleasant way of behavior they do at work. These quotes reveal a total picture of their nature. You will find these quotes interesting if you read them carefully. But finally, they are the changer of your warking fate.

43. I’ve never kept my mouth shut, especially as my industry is so misogynistic. I’ve got a reputation as a troublemaker. —Rosanna Arquette

44. I’m not a troublemaker. People say, ‘You got into a lot of incidents.’ Yeah, but it was on the basketball floor. —Charles Oakley

45. Honestly, I was a troublemaker. The environment I grew up in, my mom and my sister, they decided they were going to sign me up in every single thing to keep me busy. I played football, basketball, baseball. Anything, whatever was in season, I was signed up for it. Basketball was one of the things that just stuck. —Lou William

46. Anger, jealousy, impatience, and hatred are the real troublemakers, with them problems cannot be solved.—Dalai Lama

47. When we talk about global crisis, or a crisis of humanity, we cannot blame a few politicians, a few fanatics, or a few troublemakers. The whole of humanity has a responsibility because it is our business, human business. I call this a sense of universal responsibility. That is a crucial point. —Dalai Lama

48. Since no one really knows anything about God, those who think they do are just troublemakers.—Rabia Basri

49. This book is dedicated to the rule breakers, the troublemakers, and the revolutionaries. Sometimes the hand that feeds you needs a good bite. —Dan Wells

50. I respect every way in which you are a troublemaker, now get up and do what your mother says.—Haven Kimmel

We need, in every community, a group of angelic troublemakers. —Bayard Rustin

What Makes Someone a Troublemaker?

The negative word troublemaker becomes positive when we find that a group of people is changing everything bad in our society. Mild-natured people can not stand and talk against the injustice of our society but they can do that easily. Because of their unnatural deeds, we find an easy way to live. Troublemaker Quotes will make your conception more clear about them.

Robert Albert RAhttp://selfcarequotes.com
Hi, I'm RA, The Co-Founder of this blog. SelfCareQuotes(SCQ) is the biggest quotation site in the world. I love quotes and enjoy sharing the best ones with you.
RELATED ARTICLES
Positive Quotes

Time Quotes to Engrave on a Watch