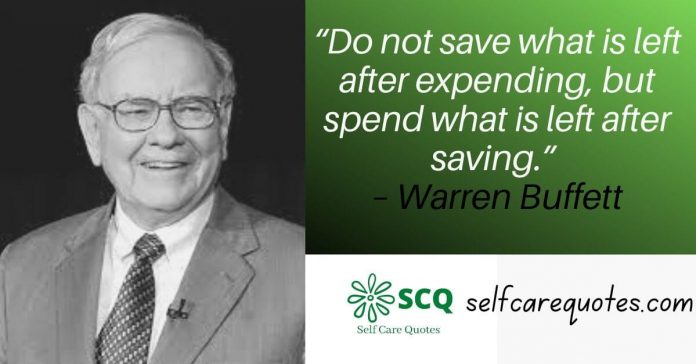 2. Never Put Your All Eggs In One Basket. – Warren Buffett

4. “No matter how great the talent or efforts, some things just take time. You can’t produce a baby in one month by getting nine women pregnant.” – Warren Buffett

6. Risk comes from not knowing what you’re doing. – Warren Buffett

8. Wall Street is the only place that people ride to in a Rolls Royce to get advice from those who take the subway. – Warren Buffett

9. “Never give up searching for the job that you are passionate about.” – Warren Buffett

10. If you think it’s risky to be an entrepreneur, then wait 40 years for someone else to work hard and depend on retirement benefits – Warren Buffett

If You Think Being An Entrepreneur Is Risky, Try Working for Some Else for 40 Years And Living Off Social Security – Warren Buffett

Top Popular Warren Buffett Quotes on Life. You can see the Video

Who was Warren Buffett:

Warren Buffett is one of the most famous names in the world. He is famous as a businessman. He is considered to be the most successful investor in the USA. Another introduction of him is his being the 4th richest person in the world in 2020 December.

This famous person has a huge number of fans. Most people love his quotes. Warren Buffett’s quotes are problem-solving for many new entrepreneurs.

12. I would say the most satisfying thing actually is watching my three children each pick up on their own interests and work many more hours per week than most people that have jobs at trying to intelligently give away that money in fields that they particularly care about. – Warren Buffett

13. Chains of habit are too light to be felt until they are too heavy to be broken. – Warren Buffett 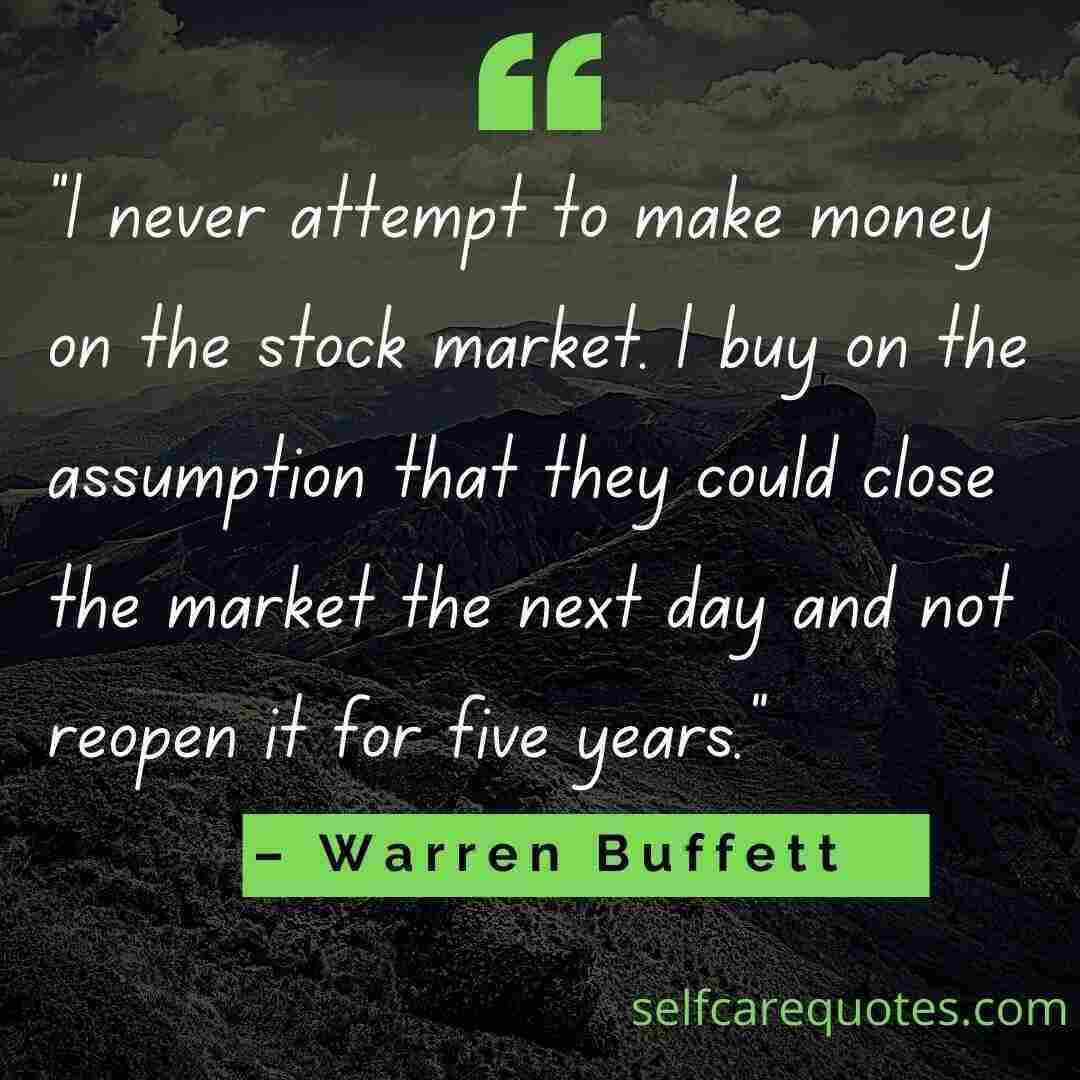 15. I never attempt to make money on the stock market. I buy on the assumption that they could close the market the next day and not reopen it for five years. – Warren Buffett

16. There seems to be some perverse human characteristic that likes to make easy things difficult. – Warren Buffett

17. I sent one e-mail in my life. I sent it to Jeff Raikes at Microsoft, and it ended up in court in Minneapolis, so I am one for one. – Warren Buffett

19. “Somebody once said that in looking for people to hire, you look for three qualities: integrity, intelligence, and energy. And if you don’t have the first, the other two will kill you. You think about it; it’s true. If you hire somebody without [integrity], you really want them to be dumb and lazy.” – Warren Buffett

20. “If you’re in the luckiest one per cent of humanity, you owe it to the rest of humanity to think about the other 99 per cent.” – Warren Buffett 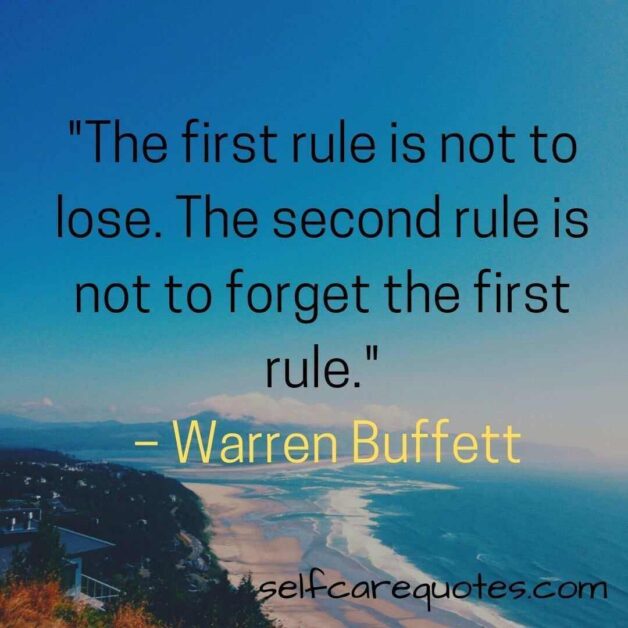 23. In the business world, the rearview mirror is always clearer than the windshield. – Warren Buffett

25. I think that both parties should declare the debt limit as a political weapon of mass destruction which can’t be used. I mean, it is silly to have a country that has 237 years building up its reputation and then have people threaten to tear it down because they’re not getting some other matter. – Warren Buffett

26. The rich are always going to say that, you know, just give us more money and we’ll go out and spend more and then it will all trickle down to the rest of you. But that has not worked the last 10 years, and I hope the American public is catching on. – Warren Buffett

27. Only when the tide goes out do you discover who’s been swimming naked. – Warren Buffett

28. The only way to get love is to be lovable. It’s very irritating if you have a lot of money. You’d like to think you could write a check: ‘I’ll buy a million dollars’ worth of love.’ But it doesn’t work that way. The more you give love away, the more you get. – Warren Buffett

29. “The most important thing to do if you find yourself in a hole is to stop digging.” – Warren Buffett

30. “I insist on a lot of time being spent, almost every day, to just sit and think. That is very uncommon in American business. I read and think. So I do more reading and thinking, and make less impulse decisions than most people in business. I do it because I like this kind of life.” – Warren Buffett

32. “There comes a time when you ought to start doing what you want. Take a job that you love. You will jump out of bed in the morning. I think you are out of your mind if you keep taking jobs that you don’t like because you think it will look good on your resume. Isn’t that a little like saving up sex for your old age?” – Warren Buffett

33. “It takes 20 years to build a reputation and five minutes to ruin it. If you think about that you’ll do things differently.” – Warren Buffett 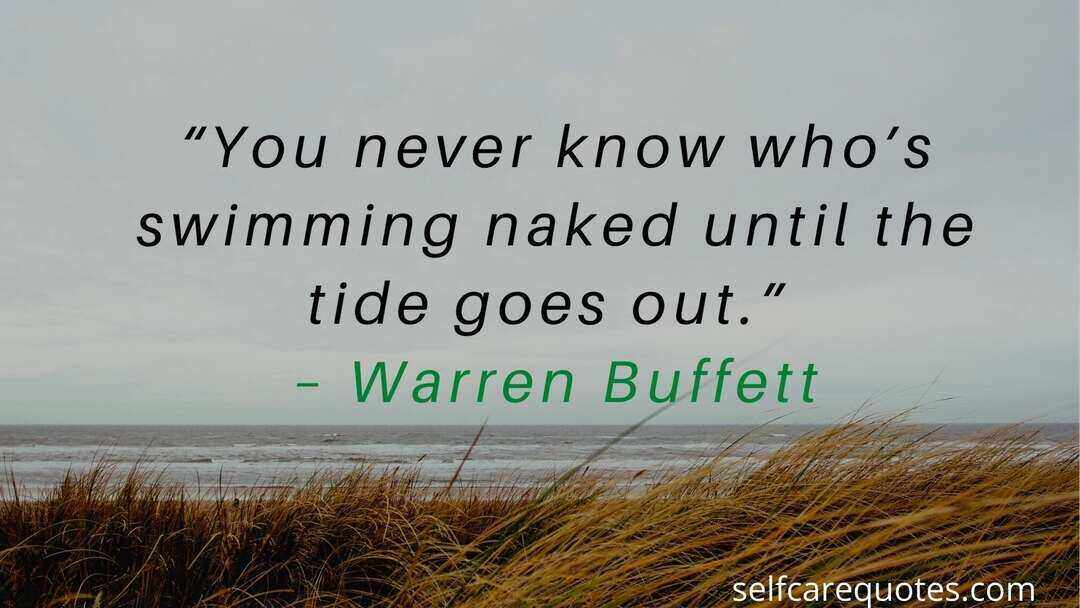 37. “You never know who’s swimming naked until the tide goes out.” – Warren Buffett

38. “You only have to do a very few things right in your life so long as you don’t do too many things wrong.” – Warren Buffett

39. “I always knew I was going to be rich. I don’t think I ever doubted it for a minute. ” – Warren Buffett

40. What an investor needs is the ability to correctly evaluate selected businesses. Note that word “selected”: you don’t have to be an expert on every company, or even many. You only have to be able to evaluate companies within your circle of competence. The size of that circle is not very important; knowing its boundaries, however, is vital. – Warren Buffett

41. “I’ve seen more people fail because of liquor and leverage — leverage being borrowed money. You really don’t need leverage in this world much. If you’re smart, you’re going to make a lot of money without borrowing.” – Warren Buffett

43. “I tell college students, when you get to be my age you will be successful if the people who you hope to have love you, do love you.” – Warren Buffett

47. “Opportunities come infrequently. When it rains gold, put out the bucket, not the thimble.” – Warren Buffett

48. “If you aren’t willing to own a stock for ten years, don’t even think about owning it for ten minutes. Put together a portfolio of companies whose aggregate earnings march upward over the years, and so also will the portfolio’s market value.” – Warren Buffett

49. “The rich invest in time, the poor invest in money.” – Warren Buffett

50. Someone is sitting in the shade today because someone planted a tree a long time ago. – Warren Buffett

The birth year of Warren Buffett is 1930. He was born on the 30th of August of this year. His birthplace is Omaha, Nebraska. His parent’s names are Leila and Howard Buffett. His father was a congressman.

We find that the birth of this great man was from a great political family. In the time of his Elementary Schooling, Warren Buffett’s life was influenced by his father’s being elected as United States Congressman for the fourth time and then his family moved to Washington DC.

Warren Buffett’s early life was not so special but he was impressive in his teenage and youth.

Warren Buffett started his education at Rose Hill Elementary School. At the age of 16, Warren Buffett joined Wharton School but he realized that he knew more than the professor of that school.

The career of Warren Buffett:

Then he started working at Graham-Newman Corp from 1954-1956. Later till he started his career at Berkshire Hathaway Inc in 1970 as a CEO. In the meantime, he worked for many other companies.

The life and career of Warren Buffett are amazing as a businessman and also an iconic person. You can follow him as well as great qualities. The Warren Buffett quotes are realistic and instructive.

If you want to know about the reason for following someone then you have analyzed his biography very well. If you look at the biography of Warren Buffett then one thing will draw our attention, i.e. he is a successful businessman.

So, it is really simple to say that, if you want to be a successful person in the corporate world then you have to follow him. Besides this, he is a philanthropist. This is a great quality of a human being to follow.

We can follow him for this great activity. Another reason for what we can follow from Warren Buffett is his aim in life. Just after completing the high school study, it fixed his goal to be a businessman in life. And in the present day, we find him as a successful Businessman.

Robert Albert RAhttp://selfcarequotes.com
Hi, I'm RA, The Co-Founder of this blog. SelfCareQuotes(SCQ) is the biggest quotation site in the world. I love quotes and enjoy sharing the best ones with you.
RELATED ARTICLES
Authors Quotes