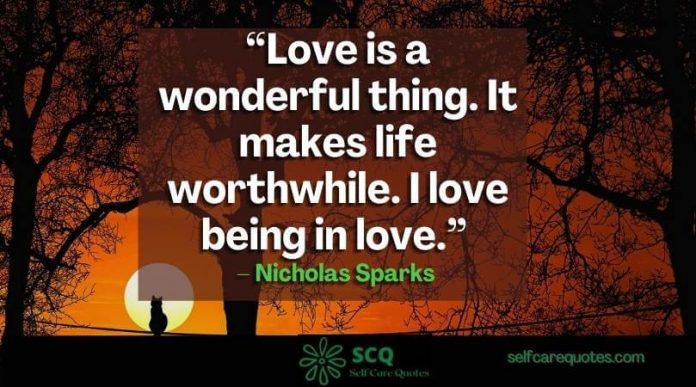 It’s not always easy to make decisions, especially if you’ve got to choose between two things that are pretty much equally good. There are plenty of quotes about the difficulty of making tough choices. Often these quotes are broken down into two categories: those who believe it’s better to be decisive and take any choice no matter the outcome, and those who believe it’s better to wait for a more favorable opportunity.

1. “Love is a wonderful thing. It makes life worthwhile. I love being in love.” – Nicholas Sparks

2. “Traveling has less to do with seeing things than experiencing them…” – Nicholas Sparks

3. “How far should a person go in the name of true love?” – Nicholas Sparks

4. “Spending time with you showed me what I’ve been missing in my life.” – Nicholas Sparks

5. “There were moments when it honestly seemed as if the world were conspiring against her.” – Nicholas Sparks

6. “Spending time with you showed me what I’ve been missing in my life. The more time we spent together, the more I could imagine it lasting in the future. That’s never happened to me before, and I’m not sure it’ll ever happen again. I’ve never been in love with anyone before you came along — not real love anyway…not like this. And I’d be a fool if I let you slip away without a fight” – Nicholas Sparks

7. “He’d lived long enough to know that everyone handles grief in different ways, and little by little, they all seemed to accept their new lives.” – Nicholas Sparks

8. “There are moments when mental overload can render words impossible.” – Nicholas Sparks

9. “He often felt that too many people lived their lives acting and pretending, wearing masks and losing themselves in the process.” – Nicholas Sparks

10. “Stories are as unique as the people who tell them, and the best stories are in which the ending is a surprise.” – Nicholas Sparks

11. “Staring at the stars was like staring backward in time, since some stars are so far away that their light takes millions of years just to reach us. That we see stars not as they look now, but as they were when dinosaurs roamed the earth. The whole concept just struck me as…amazing somehow.” – Nicholas Sparks

12. “How far would you go to keep the hope of love alive?” – Nicholas Sparks

13. “I guess what I’m trying to say is that you two make me believe that true love really exists. And that even the darkest hours can’t take that away.” – Nicholas Sparks 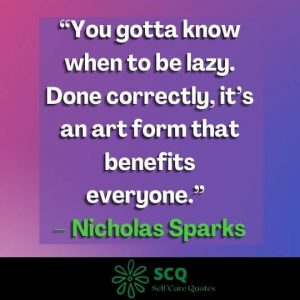 14. “You gotta know when to be lazy. Done correctly, it’s an art form that benefits everyone.” – Nicholas Sparks

15. “He felt as though he were failing in practically every area of his life. Lately, happiness seemed as distant and unattainable to him as space travel. He hadn’t always felt this way. There had been a long period of time during which he remembered being very happy. But things change. People change. Change was one of the inevitable laws of nature, exacting its toll on people’s lives. Mistakes are made, regrets form, and all that was left were repercussions that made something as simple as rising from the bed seem almost laborious.” – Nicholas Sparks

16. “He leaned closer, their faces drawing near, and he could feel the heat of her breath mingling with his. He closed his eyes against the memory of a thousand other kisses and touched his lips to hers. He felt a kind of spark, and all at once he felt her slowly coming back to him. She was the arm that held him close in times of trouble, she was the whisper on the pillow beside him at night.” – Nicholas Sparks

17. “The past was gone and the future had yet to unfold, and he knew he should focus his life on the present…yet his day-to-day existence suddenly struck him as endless and unbearable.” – Nicholas Sparks

18. “I love you, Gabby, more than you’ll ever know. You’re everything I’ve ever wanted in a wife. You’re every hope and every dream I’ve ever had, and you’ve made me happier than any man could possibly be. I don’t ever want to give that up. I can’t.” – Nicholas Sparks

The quote, “Life is like a ten-speed bicycle. Most of us have gears we never use,” by novelist Anne Tyler, may capture the idea that life has many different paths, but few of these are perfect for everyone. The quote also shows how one can be living an unsatisfying life without even realizing it due to their inability to find the right gear.

It’s no secret that the journey to success is not an easy one. It often requires facing your deepest fears head on, and sometimes it takes days, weeks, months, years or even decades to obtain the success you want. It’s natural then that there are many quotes about this journey that can inspire you to keep going.

The most important decision in life is what you do with your time. Do you waste it on things that don’t matter, or do you invest it in something that will? It is up to you to decide how to spend your time, but if you are looking for some motivational quotes, here are a few for inspiration.

– “if change is not constant then progress is not possible,” often said by author Charles R.

It’s not always easy to make decisions, especially if you’ve got to choose between two things that are pretty much equally good. There are plenty of quotes about the difficulty of making tough choices. Often these quotes are broken down into two categories: those who believe it’s better to be decisive and take any choice no matter the outcome, and those who believe it’s better to wait for a more favorable opportunity. 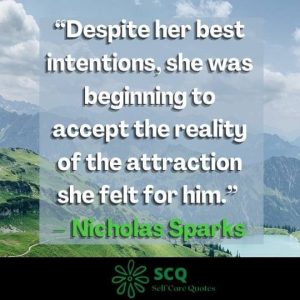 19. “Despite her best intentions, she was beginning to accept the reality of the attraction she felt for him.” – Nicholas Sparks

20. “Marriage, each of them realized intuitively, was about compromise and forgiveness. It was about balance, where one person complemented the other.” – Nicholas Sparks

21. “That’s the thing about being the product of happily married parents, You grow up thinking the fairy tale is real, and more than that, you think you’re entitled to live it. So far, though, it wasn’t working out as planned.” – Nicholas Sparks

21. “He was so different from her, yet in his presence she felt the possibility of another kind of life, a life she had never imagined could be hers. A life without the rigid limitations others had always set for her.” – Nicholas Sparks

23. “It always amazes me that once you cut through the clutter, people are pretty much the same. Especially through adolescence and early adulthood. For the most part, people go through the same experiences and think the same things, but somehow no one ever escapes the belief that his experience is unique in every conceivable way.” – Nicholas Sparks

24. “You are in so much more trouble than I thought you were!” – Nicholas Sparks

25. “Questions that had begun to creep into her thoughts whenever they we’re together. When would he be ready? Would he ever be ready? And of course, why wasn’t he ready?” – Nicholas Sparks

26. “That’s the first time you said my name…and I like it” – Nicholas Sparks

27. “In the distance, he could see Molly lying in the tall grass off to the side of the house.” – Nicholas Sparks

28. “All I know is that I fell in love with you, and I’ve never been more frightened about anything in my entire life.” – Nicholas Sparks

29. “Maybe my intuition has been warning me about something I don’t quite understand but shouldn’t be underestimated.” – Nicholas Sparks 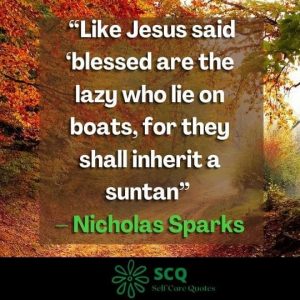 30. “Like Jesus said ‘blessed are the lazy who lie on boats, for they shall inherit a suntan” – Nicholas Sparks

31. “He just thinks that he wants to marry me. Brett is the kind of guy that likes a challenge, I’m a challenge. As long as I stay a challenge, he’ll keep asking. And when I know he’s really ready, that’s when I’ll say yes.” – Nicholas Sparks

32. “You’re a good girl and always have been, but deep down, you think there’s more to life than always following the rules, and there’s a part of you that craves the unknown.” – Nicholas Sparks

33. “You’re selective when it comes to sex, but once you’re with someone, the standards you would normally hold yourself to go out the window…” – Nicholas Sparks

34. “Sometimes, despite the structured chaos always associated with mornings, they would simply lie together in each other’s arms for a few more minutes, as if drawing the strength to face the upcoming day.” – Nicholas Sparks

35. “Some things were beyond understanding.” – Nicholas Sparks

36. “For the most part, people go through the same experiences and think the same things, but somehow no one ever escapes the belief that his experience is unique in every conceivable way.” – Nicholas Sparks

37. “That’s another reason I keep putting marriage off. I know I want something like what you two share, and I’m not sure I’ve found it yet. I’m not sure I ever will. And with love like that…they say anything’s possible, right?” – Nicholas Sparks

38. “A moment later, he plopped down on the sand beside her, and when they accidentally touched, Gabby had the briefest flash of them sitting together just like this on a hundred different weekends in the future.” – Nicholas Sparks

39. “It was inevitable for people to try to create a sense of normalcy in a place where nothing was normal. It helped one get through the day, to add predictability to a life that was inherently unpredictable.” – Nicholas Sparks 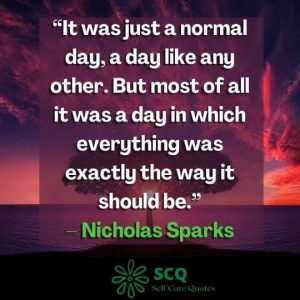 40. “It was just a normal day, a day like any other. But most of all it was a day in which everything was exactly the way it should be.” – Nicholas Sparks

“Conversation was the lyrics, laughter was the music, making time spent together a melody that could be replayed over and over without getting stale.” – Nicholas Sparks

Finally, we can see how the world of quotes has evolved over the years and continues to do so. With such a vast range of topics, people can find new ways to express themselves.

We know that the world of quotes is constantly changing and we want to hear from you! Share your favorite quote on our website @selfcarequotes The Choice Quotes and we will share it with our followers!