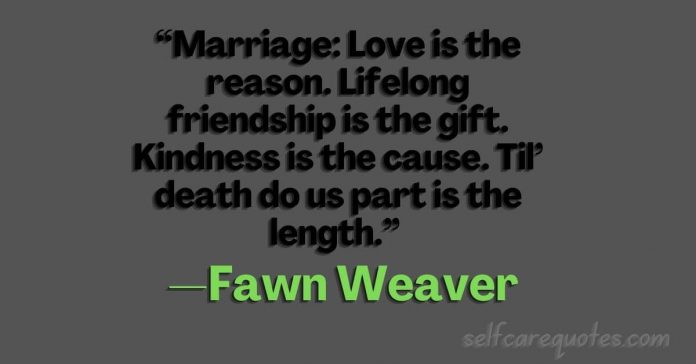 1. “Marriage: Love is the reason. Lifelong friendship is the gift. Kindness is the cause. Til’ death do us part is the length.” —Fawn Weaver

2. “Marriage, ultimately, is the practice of becoming passionate friends.”—Harville Hendrix

3. “A successful marriage requires falling in love many times, always with the same person.”—Mignon McLaughlin

4. “A happy marriage is the union of two good forgivers.”—Robert Quillen

5. “Marriages are like fingerprints; each one is different and each one is beautiful.”—Maggie Reyes

6. “Being in a long marriage is a little bit like that nice cup of coffee every morning – I might have it every day, but I still enjoy it.”—Stephen Gaines

7. “Marriage is getting to have a sleepover with your best friend every night of the week.”—Christie Cook

8. “A successful marriage isn’t the union of two perfect people. It’s that of two imperfect people who have learned the value of forgiveness and grace.”—Darlene Schacht

10. “Happiness in marriage is a moment by moment choice. A decision to love, forgive, grow and grow old together.” —Fawn Weaver

11. “Marriage is not a noun; it’s a verb. It isn’t something you get. It’s something you do. Its the way you love your partner every day.”—Barbara De Angelis

12. “Happily ever after is not a fairy tale. It’s a choice.”—Fawn Weaver

13. “The older I get, the less time I want to spend with the part of the human race that didn’t marry me.”—Robert Brault

14. “The best time to love with your whole heart is always now, in this moment, because no breath beyond the current is promised.”—Fawn Weaver

15. “To find someone who will love you for no reason, and to shower that person with reasons, that is the ultimate happiness.”—Robert Brault

16. “The difference between an ordinary marriage and an extraordinary marriage is in giving just a little ‘extra’ every day, as often as possible, for as long as we both shall live.”—Fawn Weaver

17. “We come to love not by finding a perfect person, but by learning to see an imperfect person perfectly.”—Sam Keen

18. “Love doesn’t make the world go round. Love is what makes the ride worthwhile.”—Franklin P. Jones

19. “Enjoy the little things in life… For one day you’ll look back and realize they were the big things.”—Robert Brault

20. “Marriage is a mosaic you build with your spouse. Millions of tiny moments that create your love story.”—Jennifer Smith

21. “The greatest marriages are built on teamwork. A mutual respect, a healthy dose of admiration, and a never-ending portion of love and grace.”—Fawn Weaver

22. “People stay married because they want to, not because the doors are locked.”—Paul Newman

23. “Once we figured out that we could not change each other, we became free to celebrate ourselves as we are.”—H. Dean Rutherford

24. “Love is the greatest gift when given. It is the highest honor when received.”—Fawn Weaver

25. “A long-lasting marriage is built by two people who believe in -and live by- the solemn promise they made.”—Darlene Schacht

27. “A great marriage is not when the ‘perfect couple’ comes together. It is when an imperfect couple learns to enjoy their differences.”—Dave Meurer

29. “Marriage is a commitment- a decision to do, all through life, that which will express your love for one’s spouse.”—Herman H. Kieval

30. “Marriage is like watching the color of leaves in the fall; ever changing and more stunningly beautiful with each passing day.”—Fawn Weaver

32. “Love is always bestowed as a gift -freely, willingly, and without expectation. We don’t love to be loved, we love to love.”—Leo Buscagalia

33. “Love is an act of endless forgiveness, a tender look which becomes a habit.”—Peter Ustinov

34. “Where there is love, there is life.”—Mahatma Gandhi

35. “Keep the fire lit in your marriage and your life will be filled with warmth.”—Fawn Weaver

39. “Love is the master key that opens the gates of happiness.”—Oliver Wendell Holmes

41. “They say it takes a village to raise a child. That may be the case, but the truth is that it takes a lot of solid, stable marriages to create a village.”—Diane Sollee

42. When my husband holds me in his arms it makes me feel -even if just for those moments- that all else is well in the world.”—Fawn Weaver

43. “Love doesn’t sit there like a stone, it has to be made, like bread; re-made everyday, made new.”—Ursula LeGuin

44. “Marriage is our society’s most pro-child institution. If you want kids to do well, then you want marriage to do well.”—David Blankenhorn

45. “Friendship in marriage is the spark that lights an everlasting flame.”—Fawn Weaver

46. “Marriage provides the solace of worked-on friendship and the joy of being known profoundly.”—Imogene Stubbs

47. “Marriage, like a submarine, is only safe if you get all the way inside.”—Frank Pittman

48. “Love is a flower which turns into fruit at marriage.”—Finnish Proverb

49. “A happy marriage doesn’t mean you have a perfect spouse or a perfect marriage. It simply means you’ve chosen to look beyond the imperfections in both.” —Fawn Weaver

50. “In marriage, when we honor and celebrate each other, we’re freed up to be the best people we can be.” —Drs. Les & Leslie Parrott

“A good marriage is each for the other and two against the world.”—Robert Brault

“Marriage is the virtuous exploration of love in its purest form and pleasure in its highest state.”—Fawn Weaver

We hope you found these quotes to be inspiring and motivational. Thanks for reading!

Robert Albert RAhttp://selfcarequotes.com
Hi, I'm RA, The Co-Founder of this blog. SelfCareQuotes(SCQ) is the biggest quotation site in the world. I love quotes and enjoy sharing the best ones with you.
RELATED ARTICLES
Positive Quotes

Time Quotes to Engrave on a Watch