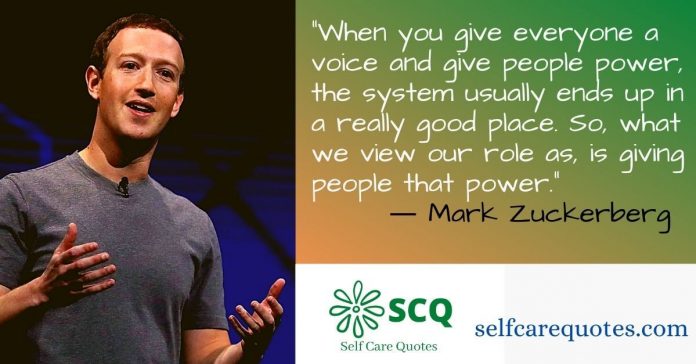 Mark Zuckerberg is well-known to all over the world as the co-founder of the most popular social networking site ‘Facebook.’ He is the CEO (Chief Executive Officer), controlling shareholder and chairman of ‘Facebook.’ Mark Zuckerberg is a renowned American media magnate. We also find him as a successful philanthropist and the internet entrepreneur. The full name of this legend is Mark Elliot Zuckerberg.

In the career, Mark Zuckerberg has achieved the utmost success. Now, Mark Zuckerberg is the fourth richest person in the world. Zuckerberg also wins our respect because of his human quality. He always inspires people to achieve their goals. If you look over the Mark Zuckerberg quotes, you will find it highly motivational for them, who suffer from a lack of confidence. He inspires us to make our failure the source of strength.

1. “When you give everyone a voice and give people power, the system usually ends up in a really good place. So, what we view our role as, is giving people that power.” – Mark Zuckerberg 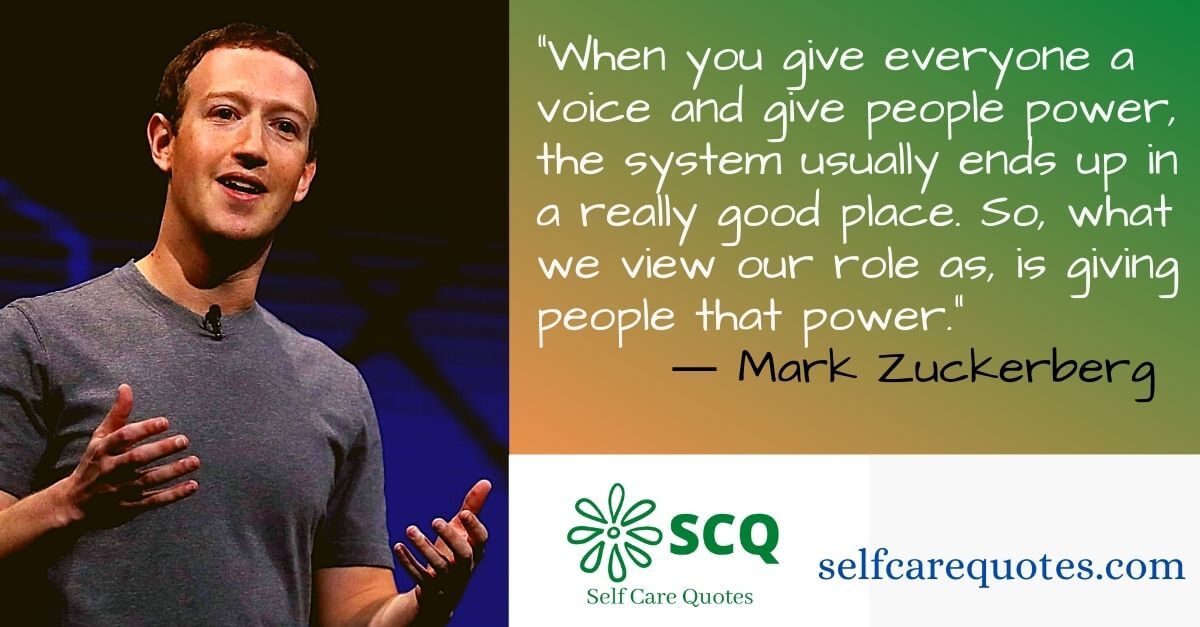 2. “If you’re always under the pressure of real identity, I think that is somewhat of a burden.” – Mark Zuckerberg

3. “I think that people just have this core desire to express who they are. And I think that’s always existed.” – Mark Zuckerberg

4. “Don’t let anyone tell you to change who you are.” – Mark Zuckerberg

5. “Our society needs more heroes who are scientists, researchers, and engineers. We need to celebrate and reward the people who cure diseases, expand our understanding of humanity and work to improve people’s lives.” – Mark Zuckerberg

6. “The biggest risk is not taking any risk… In a world that’s changing really quickly, the only strategy that is guaranteed to fail is not taking risks.” – Mark Zuckerberg

7. “Unless you are breaking stuff, you are not moving fast enough.” – Mark Zuckerberg

8. “I think a simple rule of business is, if you do the things that are easier first, then you can actually make a lot of progress.” – Mark Zuckerberg

9. “A lot of people are focused on taking over the world or doing the biggest thing and getting the most users. I think part of making a difference and doing something cool is focusing intensely.” – Mark Zuckerberg

12. “The question I ask myself like almost every day is, ‘Am I doing the most important thing I could be doing?’” – Mark Zuckerberg

13. “If you just work on stuff that you like and you’re passionate about, you don’t have to have a master plan with how things will play out.” – Mark Zuckerberg

15. “You are better off trying something and having it not work and learning from that than not doing anything at all.” – Mark Zuckerberg

Top 50 Mark Zuckerberg Quotes That Will Give You Infinite inspiration. You Can See the Video

16. “Founding a company is hard. Most of it isn’t smooth. You’ll have to make very hard decisions. You have to fire a few people. Therefore, if you don’t believe in your mission, giving up is easy. The majority of founders give up. But the best founders don’t give up.” – Mark Zuckerberg

17. “The companies that work are the ones that people really care about and have a vision for the world so do something you like.” – Mark Zuckerberg

19. “I made so many mistakes in running the company so far, basically any mistake you can think of I probably made. I think, if anything, the Facebook story is a great example of how if you’re building a product that people love you can make a lot of mistakes.” – Mark Zuckerberg

21. “My goal was never to just create a company. A lot of people misinterpret that, as if I don’t care about revenue or profit or any of those things. But what not being just a company means to me is not being just that – building something that actually makes a really big change in the world.” – Mark Zuckerberg

22. “I always kind of see how I want things to be better, and I’m generally not happy with how things are or the level of service that we’re providing for people or the quality of the teams that we built. But if you look at this objectively, we’re doing so well on so many of these things. I think it’s important to have gratitude for that.” – Mark Zuckerberg

23. “The real story of Facebook is just that we’ve worked so hard for all this time. I mean, the real story is actually probably pretty boring, right? I mean, we just sat at our computers for six years and coded.” – Mark Zuckerberg

24. “When most people ask about a business growing, what they really mean is growing revenue, not just growing the number of people using a service. Traditional businesses would view people using your service that you don’t make money from as a cost.” – Mark Zuckerberg

26. “So many businesses get worried about looking like they might make a mistake, they become afraid to take any risk. Companies are set up so that people judge each other on failure.” – Mark Zuckerberg

27. “Entrepreneurship is about creating change, not just companies.” – Mark Zuckerberg

28. “There are different ways to do innovation. You can plant a lot of seeds, not be committed to any particular one of them, but just see what grows. And this really isn’t how we’ve approached this. We go mission-first, then focus on the pieces we need and go deep on them and be committed to them.” – Mark Zuckerberg

30. “I got my first computer in the 6th grade or so. As soon as I got it, I was interested in finding out how it worked and how the programs worked and then figuring out how to write programs at just deeper and deeper levels within the system.”– Mark Zuckerberg

32. “People think innovation is just having a good idea but a lot of it is just moving quickly and trying a lot of things.” – Mark Zuckerberg

33. “I’m here to build something for the long-term. Anything else is a distraction.” – Mark Zuckerberg

34. “Books allow you to fully explore a topic and immerse yourself in a deeper way than most media today.” – Mark Zuckerberg

35. “My number one piece of advice is: you should learn how to program.” – Mark Zuckerberg

36. “I think the internet is really good in general because it helps people get access to more information.” – Mark Zuckerberg

37. “The Hacker Way is an approach to building that involves continuous improvement and iteration. Hackers believe that something can always be better and that nothing is ever complete.” – Mark Zuckerberg

38. “The most important thing that entrepreneurs should do is pick something they care about, work on it, but don’t actually commit to turning it into a company until it actually works.” – Mark Zuckerberg

39. “It is important for young entrepreneurs to be adequately self-aware to know what they do not know.” – Mark Zuckerberg 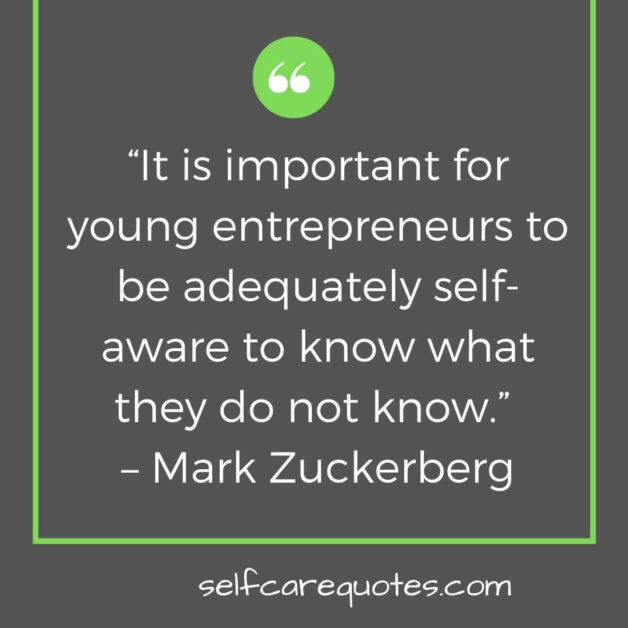 40. “In terms of doing work and in terms of learning and evolving as a person, you just grow more when you get more people’s perspectives… I really try and live the mission of the company and… keep everything else in my life extremely simple.” – Mark Zuckerberg

41. “You get a reputation for stability if you are stable for years.” – Mark Zuckerberg

42. “People can be really smart or have skills that are directly applicable, but if they don’t really believe in it, then they are not going to really work hard.” – Mark Zuckerberg

43. “Find that thing you are super passionate about.” – Mark Zuckerberg

44. “It takes courage to choose hope over fear.” – Mark Zuckerberg

45. “This is a perverse thing, personally, but I would rather be in a cycle where people are underestimating us. It gives us latitude to go out and make big bets that excite and amaze people.” – Mark Zuckerberg

46. “I’m here to tell you finding your purpose isn’t enough. The challenge for our generation is creating a world where everyone has a sense of purpose.” – Mark Zuckerberg

47. “Nothing influences people more than a recommendation from a trusted friend.” – Mark Zuckerberg

48. “Some people dream of success…while others wake up and work hard at it.” – Mark Zuckerberg

49. “Instead of building walls, we can help build bridges.” – Mark Zuckerberg

50. “Whatever you build, build with care. Anyone who has built something big has done it with care.” – Mark Zuckerberg 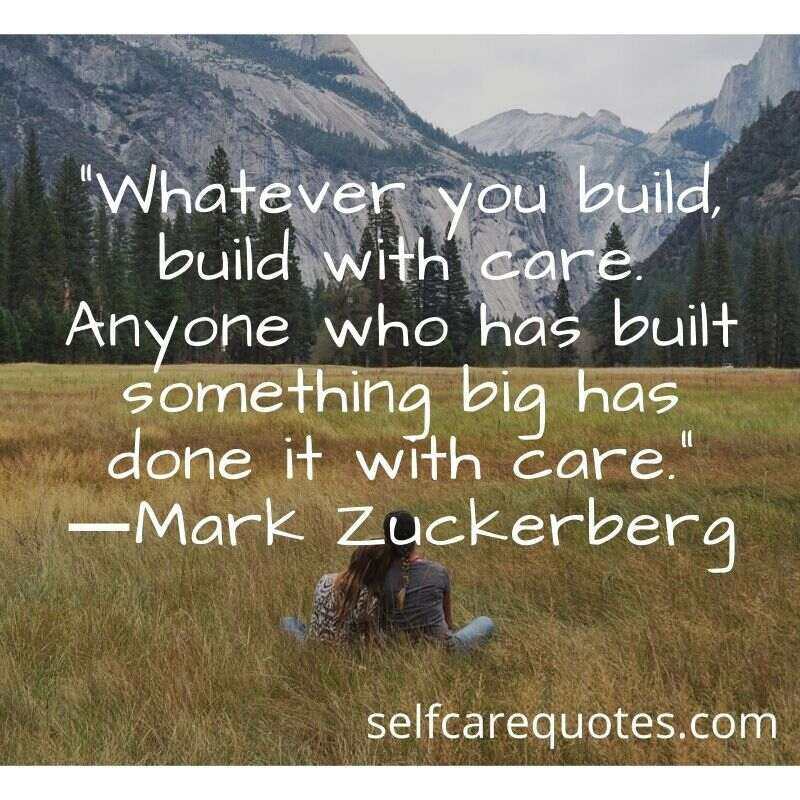 The birth year of Mark Elliot Zuckerberg is 1984. He was born in New York, U.S. His father’s name is Edward Zuckerberg, who is a renowned dentist. His mother’s name is Karen, and she is a psychiatrist. Zuckerberg has three sisters named Donna, Randi and Arielle. The Zuckerberg siblings spent their childhood in the Dobbs Ferry of New York.

Mark Zuckerberg admitted to the Ardsley High School. He was very attentive to his studies, and he proved himself as a good student. Two years later, Zuckerberg transferred from this school. Later he joined a private school named Phillips Exeter Academy. Zuckerberg also showed his ability in this school.

The school rewarded for his efficiency in Astronomy, Physics, Mathematics and Classical Studies. He achieved prizes for his ability. Mark Zuckerberg took part in the Johns Hopkins Centre for talented youth.

We also find him a multilingual person from an early age. He has the efficiency in Latin, Hebrew, French and the ancient Greek. He admitted this fact during his admission to the college. During his school days, he took a graduate course in a Mercy College. Zuckerberg admitted to Harvard University but could not complete his graduation.

Mark Zuckerberg started to write programs from his school days. He learned the basic of programming from his father. Zuckerberg’s father managed a well-known software developer named David Newman as the private tutor of him.

Zuckerberg’s first software program is ‘ZuckNet’. It is the primary version of the instant messenger. He also created programs like ‘CourseMatch’, ‘Facemash’. In 2004, Mark Zuckerberg launched ‘Facebook’ as the name of ‘Thefacebook ’. In the same year, he launched a file sharing service named ‘Wirehog.’ We also find Zuckerberg launching a project called ‘internet.org.’

Mark Zuckerberg achieved the ultimate success and recognition competitively at an early age. With the talent and hardworking, he became successful in enlisting his name in the list of billionaires. We also find him as the world’s youngest billionaire, who made his fortune with his hard work.

Mark Zuckerberg was successful, to be a billionaire at only twenty-three years old. We should also be self-independent. We should not depend on our parents for our careers. Instead, we should create our path with hard work and dedication. We have to love our work.

If we go through the life history of Mark Zuckerberg, we will find that he never ran after the money. Instead; he wanted to use his creation for the communicative purpose of the people. Zuckerberg acknowledged this fact. We should also give priority to the betterment of people first.