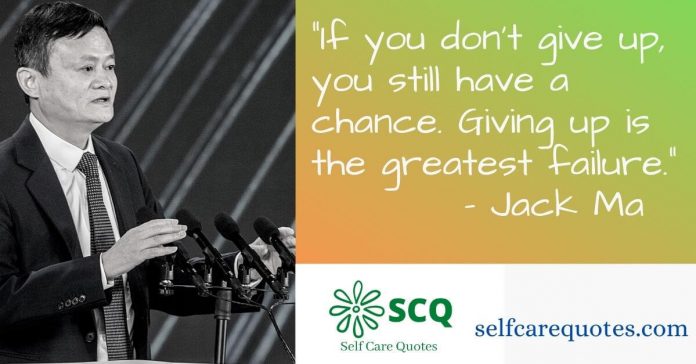 Jack Ma is the e of the greatest entrepreneurs of today’s world. He is a renowned investor, businessman, and philanthropist of China.

He is well-known as the former chairman and the co-founder of Alibaba Group.

Jack Ma achieved his success by facing a lot of challenges and obstacles. We also recognize Jack Ma as the global ambassador of Chinese business.

Jack Ma is the role model and the inspiration for the people who are thinking of starting the ‘Starter Business’.

He maintained his responsibility as the executive chairman of Alibaba group till 2018. If you want to be acquainted with Jack Ma’s philosophy, you may go through the Jack Ma quotes.

2. “Help young people. Help small guys. Because small guys will be big. Young people will have the seeds you bury in their minds, and when they grow up, they will change the world.” – Jack Ma

4. “Without internet, there would have been no Jack Ma, and no Alibaba or Taobao.” – Jack Ma

5. “Life is so short, so beautiful. Don’t be so serious about work. Enjoy the lives.” – Jack Ma

6. “Never ever do business with the government. Be in love with them, never marry them.” – Jack Ma

8. “When we have money, we start making mistakes.” – Jack Ma

10. “If you don’t give up, you still have a chance. Giving up is the greatest failure.” – Jack Ma 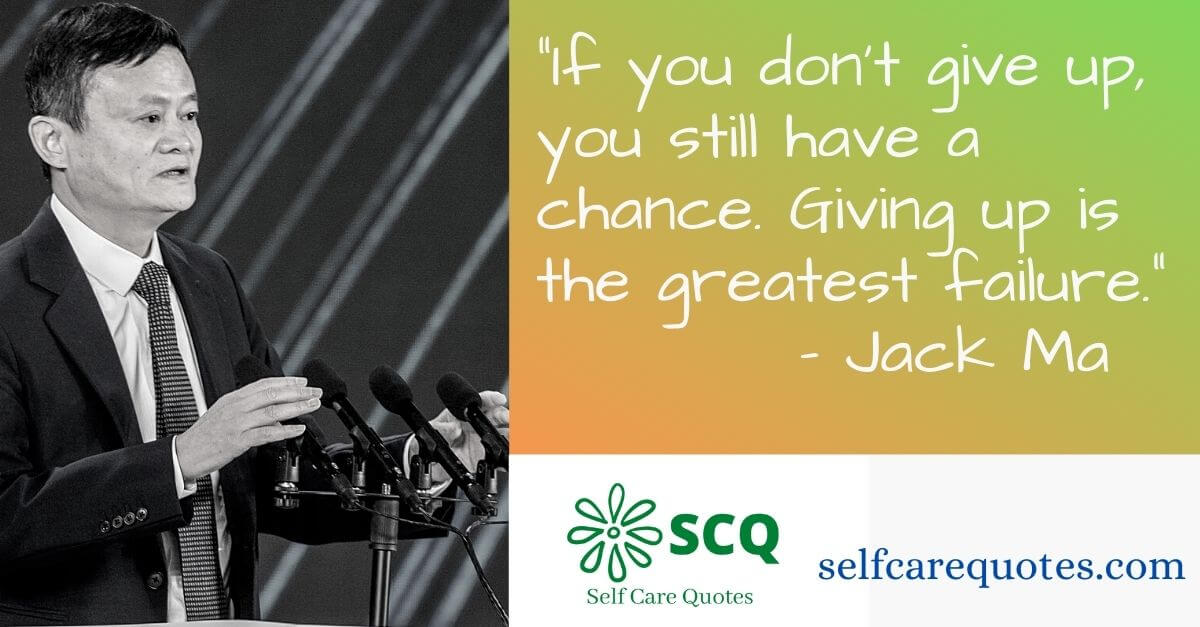 13. “I’m not a tech guy. I’m looking at the technology with the eyes of my customers, normal people’s eyes.” – Jack Ma

15. “When you are small, you have to be very focused and rely on your brain, not your strength.” – Jack Ma

16. “Today, making money is very simple. But making sustainable money while being responsible to the society and improving the world is very difficult.” – Jack Ma

Top 50 Jack Ma Quotes That Will Give You Inspiration. You Can See the Video

17.“Opportunity lies in the place where the complaints are.” – Jack Ma

18. “You never know that the things you’re doing are that meaningful to society.” – Jack Ma

20. “A leader should have higher grit and tenacity, and be able to endure what the employees can’t.” – Jack Ma

22. “It doesn’t matter if I failed. At least I passed the concept on to others. Even if I don’t succeed, someone will succeed.” – Jack Ma 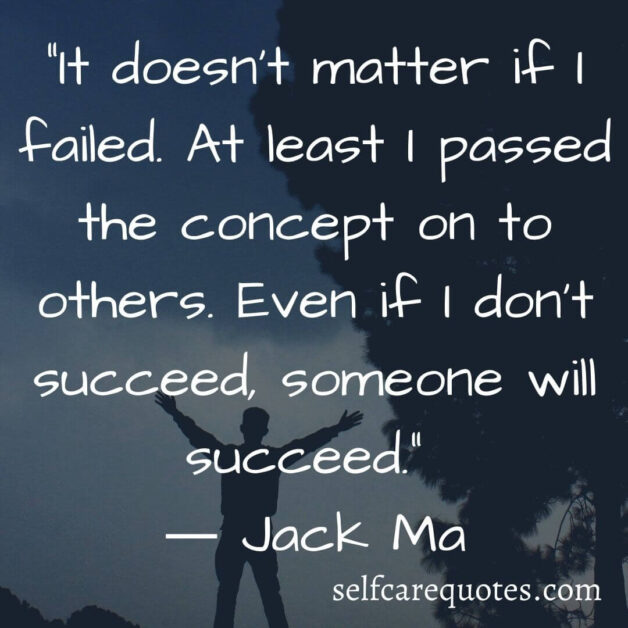 25. “You should learn from your competitor, but never copy. Copy and you die.” – Jack Ma

27. “You’ve to make consumers smart. An e-commerce portal doesn’t sell a product at cheaper rates, instead an offline shop sells it at a costlier price.” – Jack Ma

28. “If the customer loves you, the government will have to love you.” – Jack Ma

29. “We’re never in lack of money. We lack people with dreams, (people) who can die for those dreams.” – Jack Ma

30. “The very important thing you should have is patience.” – Jack Ma

31. “Never ever compete on prices, instead compete on services and innovation.” – Jack Ma

32. “Instead of learning from other people’s success, learn from their mistakes. Most of the people who fail share common reasons(to fail) whereas success can be attributed to various different kinds of reasons.” – Jack Ma

33. “Intelligent people need a fool to lead them. When the team’s all a bunch of scientists, it is best to have a peasant lead the way. His way of thinking is different. It’s easier to win if you have people seeing things from different perspectives.” – Jack Ma

35.Today the financial market is no good, but the money is there. – Jack Ma

38. “You’ve got to make your team have value, innovation, and vision.” – Jack Ma

39. “We appreciate yesterday, but we’re looking for a better tomorrow.” – Jack Ma

41. “No matter how tough the chase is, you should always have the dream you saw on the first day. It’ll keep you motivated and rescue you (from any weak thoughts).” – Jack Ma

42. If you want to invest in us, we believe customer number one, employee number two, shareholder number three. If they don’t want to buy that, that’s fine. If they regret, they can sell us. – Jack Ma

43. I believe the most important thing for the media is to be objective, fair, and balanced. We should not report a story with preconceptions or prejudice. – Jack Ma

44. “I want to change history, do something important in my life, and influence individuals like we have with millions of small businesses on Alibaba. Then they love and respect you because you made their life important.”– Jack Ma

45. I’m not a tech guy. I’m looking at the technology with the eyes of my customers, normal people’s eyes. – Jack Ma

46. I’m humble ’cause I think many years ago people say, ‘Well, Alibaba’s terrible company’. And I know we were not that terrible. We’re pretty good; we’re better than people thought. But today, when people have a high expectation on you, and I start to worry and nervous because we are not good yet. – Jack Ma

47. A trade war would be a disaster for the world. It’s very easy to slip into a trade war. – Jack Ma

48. There are big problems that change the world. If we are working together, that will make us understand each other, appreciate each other, help each other. – Jack Ma

50. A startup for entrepreneurs is like a baby, and I have five babies so far – experienced father. – Jack Ma

The birth year of Jack Ma is 1968. He was born in Hangzhou, China. Jack Ma’s parents were involved in the Music-related profession.

Jack Ma was passionate to learn English from his childhood. To be a good speaker, he used to practice in the local hotel near to his home.

In this hotel, he could meet with the foreigner. Some of the foreigners became his ‘pen pals’. He got the nickname ‘Jack’ from one of them.

Jack Ma was not good at his academic studies. He failed two times in the Chinese Entrance Exams. We may find his quality in leadership from his school life.

Jack Ma successfully played his role as the head of the Student Council. He got admitted to the Hangzhou Teacher’s Institute. This institute is today’s Hangzhou Normal University.

In 1988, Jack Ma graduated with a Bachelor of Arts in English from this University.

We have previously mentioned that Jack Ma started his career as a tourist guide. He involved in this career for improving his English speaking skill.

After graduation, he joined as a Lecturer at Hangzhou Dianzi University. Jack Ma had struggled a lot in his career. He was rejected from almost thirty jobs.

‘Hangzhou Haibo Translation Agency’ is the first company of Jack Ma. He established this company in 1994. During 1995, he came to know about the internet. After that, he created many websites.

Later he moved to the e-commerce business and founded ‘Alibaba’. We all know about his success in this field. He also founded Ali Mama, Ali Pay, Lynx, and the Taobao Marketplace. We also find Jack Ma in the acting career.

If you go through the life history of Jack M, you’ll find this legend has started his career as a tourist guide. Now, Jack Ma is the inspiration of thousands of people for his success in life.

But he was not successful from the beginning of his career. He was rejected and failed several times in his life. But he didn’t lose hope in the failure of his life. Instead, he got more inspiration from his failure.

See more: Top 100 Failure Quotes That Will Lead You

We should also learn from our failures. We should generate courage and strength from our failure. If we find our motivation and inspiration from our failure then we’ll never break down into any negative situations in our life. Jack Ma’s life struggle inspires thousands of people who are struggling for their identity and success.

See more: Top 100 Success Quotes That Will Inspire You to Succeed