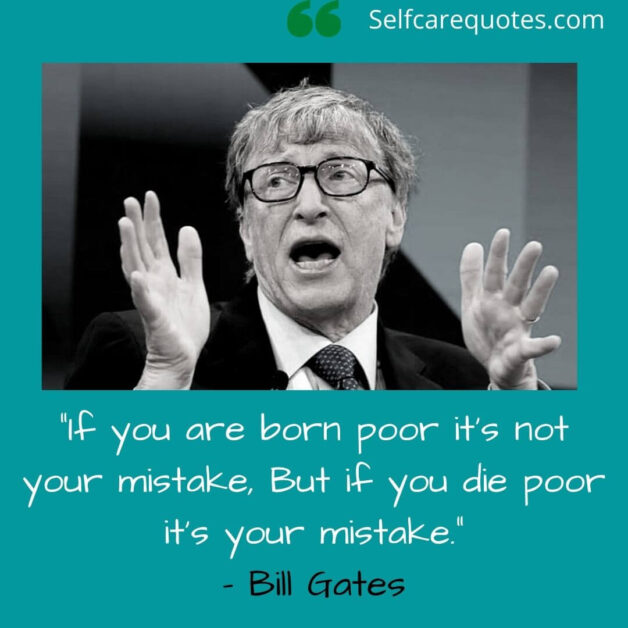 Bill Gates is a world-wide famous business magnate and a software developer. We also know him as a renowned philanthropist. The original name of this legend is William Henry Gates III.

Bill Gates is best known for his being the co-founder of the Microsoft Corporation. In Microsoft, Bill Gates has maintained his responsibilities as the CEO ( Chief Executive Officer) and the chairman.

He also maintains the position of chief software architect and the president of Microsoft Corporation. In the case of the occupation, we mainly find him as an investor, software developer, and entrepreneur. With his talent and hard work, he became successful to be the richest man in the world.

He is not only a successful businessman but also a wonderful human being. We can be acquainted with his talent and amazing personality by going through the Bill Gates quotes.

2. “It’s fine to celebrate success, but it is more important to heed the lessons of failure.” – Bill Gates

3. “Success is a lousy teacher. It seduces smart people into thinking they can’t lose.” – Bill Gates

4. “We make the future sustainable when we invest in the poor, not when we insist on their suffering.” – Bill Gates

5. “Americans want students to get the best education possible. We want schools to prepare children to become good citizens and members of a prosperous American economy.” – Bill Gates

You can see the Video

6. “The way to be successful in the software world is to come up with breakthrough software, and so whether it’s Microsoft Office or Windows, its pushing that forward. New ideas, surprising the marketplace, so good engineering and good business are one in the same.”– Bill Gates

7. “To win big, you sometimes have to take big risks.” – Bill Gates

8. “Don’t compare yourself with anyone in this world. If you do so, you are insulting yourself.” – Bill Gates

9. “Technology is just a tool. In terms of getting the kids working together and motivating them, the teacher is the most important.” – Bill Gates

10. “Life is not divided into semesters. You don’t get summers off, and very few employers are interested in helping you. Find yourself.” – Bill Gates

11. “Your most unhappy customers are your greatest source of learning.” – Bill Gates

12. “We all need people who will give us feedback. That’s how we improve.” – Bill Gates

13. “Business is a money game with few rules and a lot of risks.”― Bill Gates

14. “I’m a great believer that any tool that enhances communication has profound effects in terms of how people can learn from each other, and how they can achieve the kind of freedoms that they’re interested in.” – Bill Gates

15. “As we look ahead into the next century, leaders will be those who empower others.” – Bill Gates

17. “I believe in innovation and that the way you get innovation is you fund research and you learn the basic facts.” – Bill Gates

18. “Everyone needs a coach. It doesn’t matter whether you’re a basketball player, a tennis player, a gymnast or a bridge player.” – Bill Gates

19. “I really had a lot of dreams when I was a kid, and I think a great deal of that grew out of the fact that I had a chance to read a lot.” – Bill Gates

20. “Expectations are a form of first-class truth: If people believe it, it’s true.” – Bill Gates

21. “Television is not real life. In real life people actually have to leave the coffee shop and go to jobs.” – Bill Gates

24. “Before you were born, your parents weren’t as boring as they are now. They got that way from paying your bills, cleaning your clothes and listening to you talk about how cool you thought you were.

So before you save the rain forest from the parasites of your parent’s generation, try delousing the closet in your own room.” – Bill Gates

25. “I’m a big believer that as much as possible, and there’s obviously political limitations, freedom of migration is a good thing.” – Bill Gates

26. “Of my mental cycles, I devote maybe 10% to business thinking. Business isn’t that complicated.” – Bill Gates

27. “I believe that if you show people the problems and you show them the solutions they will be moved to act.” – Bill Gates

28. “The general idea of the rich helping the poor, I think, is important.” – Bill Gates

29. “This is a fantastic time to be entering the business world, because business is going to change more in the next 10 years than it has in the last 50.” – Bill Gates

30. “Our success has really been based on partnerships from the very beginning.” – Bill Gates

32. “Until we’re educating every kid in a fantastic way, until ever inner city is cleaned up, there is no shortage of things to do.” – Bill Gates

33. “If you think your teacher is tough, wait until you get a boss. He doesn’t have tenure.” – Bill Gates

34. “If I’d had some set idea of a finish line, don’t you think I would have crossed it years ago?” – Bill Gates

35. “We’ve got to put a lot of money into changing behavior.” – Bill Gates

36. “I do think this next century, hopefully, will be about a more global view. Where you don’t just think, ‘Yes, my country is doing well,’ but you think about the world at large.” – Bill Gates

37. “There is a certain responsibility that accrued to me when I got to this unexpected position.” – Bill Gates

38. “You see, antiquated ideas of kindness and generosity are simply bugs that must be programmed out of our world. And these cold, unfeeling machines show us the way.” – Bill Gates

39. “The most amazing philanthropists are people who are actually making a significant sacrifice.” – Bill Gates

40. “I have been struck again and again by how important measurement is to improve the human condition.” – Bill Gates

41. “I was lucky to be involved and get to contribute to something that was important, which is empowering people with software.” – Bill Gates

42. “I believe the returns on investment in the poor are just as exciting as successes achieved in the business arena, and they are even more meaningful!” – Bill Gates 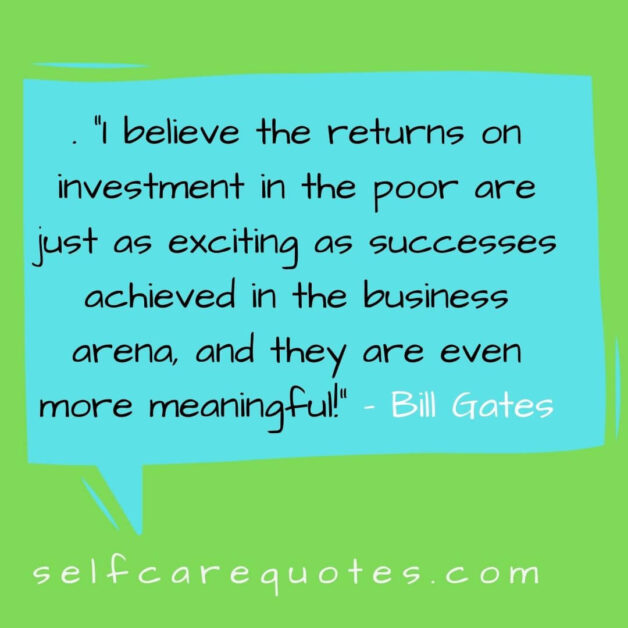 43. “Whether I’m at the office, at home, or on the road, I always have a stack of books I’m looking forward to reading.” – Bill Gates

44. “Who decides what’s in Windows? The customers who buy it.” – Bill Gates

46. “In business, the idea of measuring what you are doing, picking the measurements that count like customer satisfaction and performance… you thrive on that.” – Bill Gates

47. “Effective philanthropy requires a lot of time and creativity – the same kind of focus and skills that building a business requires.” – Bill Gates

48. “The best way to prepare [to be a programmer] is to write programs, and to study great programs that other people have written. In my case, I went to the garbage cans at the Computer Science Center and fished out listings of their operating system.” – Bill Gates

49. “In this business, by the time you realize you are in trouble, it’s too late to save yourself. Unless your running scared all the time, you’re gone.”― Bill Gates

50. “I studied everything but never topped..
But today the toppers of the best universities
are my employees”– Bill Gates 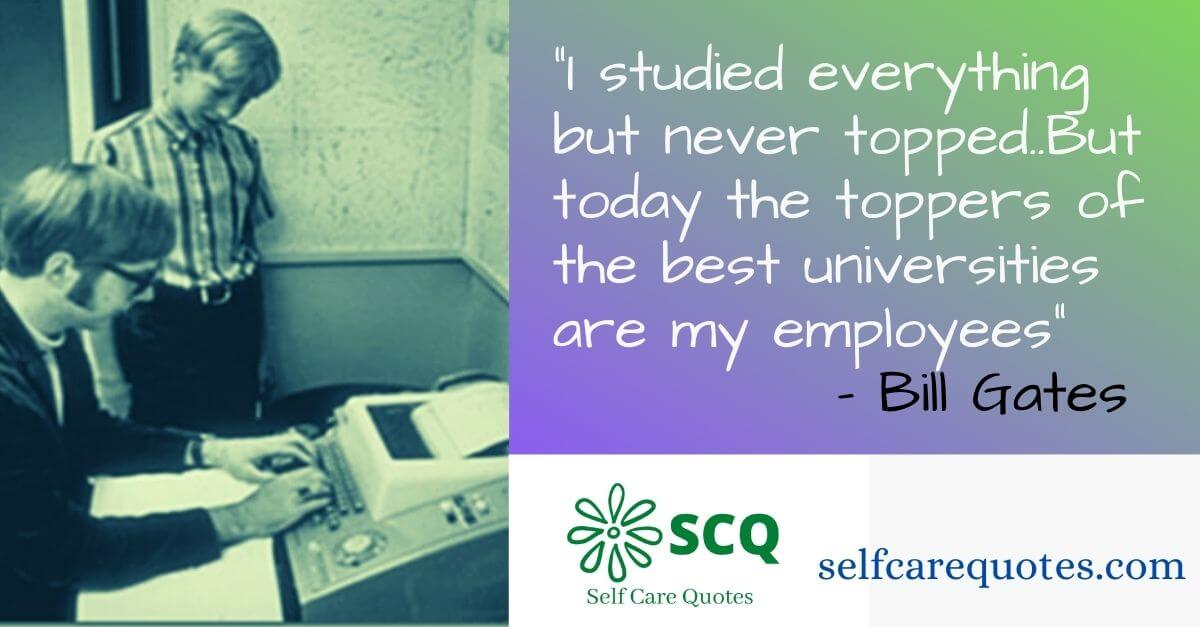 “Life is not fair, get used to it.”– Bill Gates

. “In my view, investing in public libraries is an investment in the nation’s future.” – Bill Gates

“Innovation is moving at a scarily fast pace.”– Bill Gates

“A bad strategy will fail no matter how good your information is, and lame execution will stymie a good strategy. If you do enough things poorly, you will go out of business.”– Bill Gates

“Be nice to nerds. Chances are you’ll end up working for one.” – Bill Gates

“A fundamental new rule for business is that the Internet changes everything.” – Bill Gates

“Money has no utility to me beyond a certain point.”– Bill Gates

“I am not in competition with anyone but myself.
My goal is to improve myself continuously.”– Bill Gates

“The vision is about empowering workers, giving them all the information about what’s going on so they can do a lot more than they’ve done in the past.”― Bill Gates

The birth year of Bill Gates is 1955. He was born in Seattle, Washington. The name of his mother is Mary Maxwell Gates and his father’s name is William H. Gates Sr. Bill Gates has two sisters, named Kristi and Libby.

We find Bill Gates’ father as a renowned lawyer, and he wanted his son to pursue his career as a lawyer.

Bill Gates admitted to the Lakeside prep school at the age of 13. When he was a student of this school, he had created a software program for the first time.

The school provided the students with a General Electric computer. Bill Gates took the opportunity to use the GE computer and built up an interest in programming. He admitted to the Harvard University but dropped out from this Univerity.

When Bill Gates was the school-student, he had created a game called “tic-tac-toe” through programming. The school banned Gates and his friend to the computer room. Then they offered to fix bugs from the software.

He learned machine language, Lisp and Fortran then. To the continuation, they got a project to create a traffic system. He earned from this project for the first time. In 1976, he had registered ‘Microsoft’ as a company. His company had achieved the ultimate core of success.

If we go through the life history of Bill Gates, we will find that he has built up his life in such a way that, it has become the role model of every life struggler.

Bill Gates had not confined himself to academic studies only. Instead, he was interested in programming and worked hard with his friends to create different programs in his school life.

We should not make confined our students to academic studies only. Instead, we have to create a proper atmosphere for them, so that, they can follow their interests.

From the life history of Bill Gates, we also come to know about the great works him. Bill Gates along with his wife, maintains a charitable foundation named “Bill & Melinda Gates Foundation.”

When we achieve success in our life, we should take responsibility for other’s happiness.