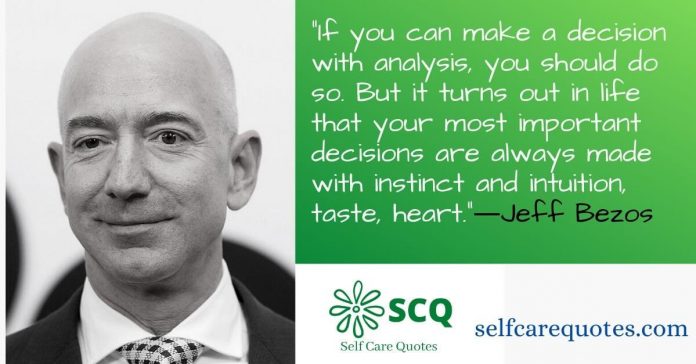 Jeff Bezos is a renowned American media proprietor, internet entrepreneur, industrialist, and investor. Mostly, all of us know him as the founder of Amazon, a multinational Company. He also maintains the responsibility as the president and the Chief Executive Officer. The original name of this legend is Jeffrey Preston Jorgensen.

Jeff Bezos on life and your career:

1. “If you can make a decision with analysis, you should do so. But it turns out in life that your most important decisions are always made with instinct and intuition, taste, heart.”―Jeff Bezos 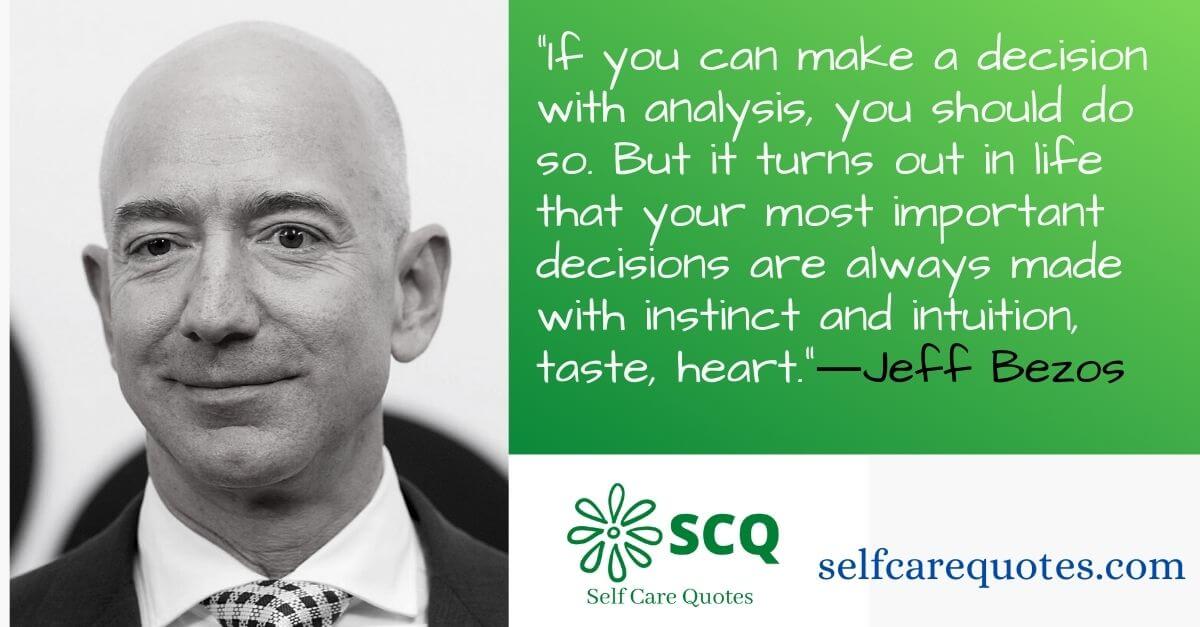 2. “Where you are going to spend your time and your energy is one of the most important decisions you get to make in life.”―Jeff Bezos

3. “The smartest people are constantly revising their understanding, reconsidering a problem they thought they’d already solved. They’re open to new points of view, new information, new ideas, contradictions, and challenges to their own way of thinking.”―Jeff Bezos

7. “If you can somehow figure out how to have a calling, you have hit the jackpot, cause that’s the big deal.”―Jeff Bezos

8. “Life’s too short to hang out with people who aren’t resourceful.”―Jeff Bezos

10. “We are stubborn on vision. We are flexible on details.”―Jeff Bezos

11. “If you only do things where you know the answer in advance, your company goes away.”―Jeff Bezos

12. “We’ve done price elasticity studies, and the answer is always that we should raise prices. We don’t do that, because we believe — and we have to take this as an article of faith — that by keeping our prices very, very low, we earn trust with customers over time, and that that actually does maximize free cash flow over the long term.”―Jeff Bezos

14. “A company shouldn’t get addicted to being shiny, because shiny doesn’t last.”―Jeff Bezos

15. “We’ve had three big ideas at Amazon that we’ve stuck with for 18 years, and they’re the reason we’re successful: Put the customer first. Invent. And be patient.”―Jeff Bezos

16. “If you’re competitor focused, you have to wait until there is a competitor doing something. Being customer-focused allows you to be more pioneering.”―Jeff Bezos 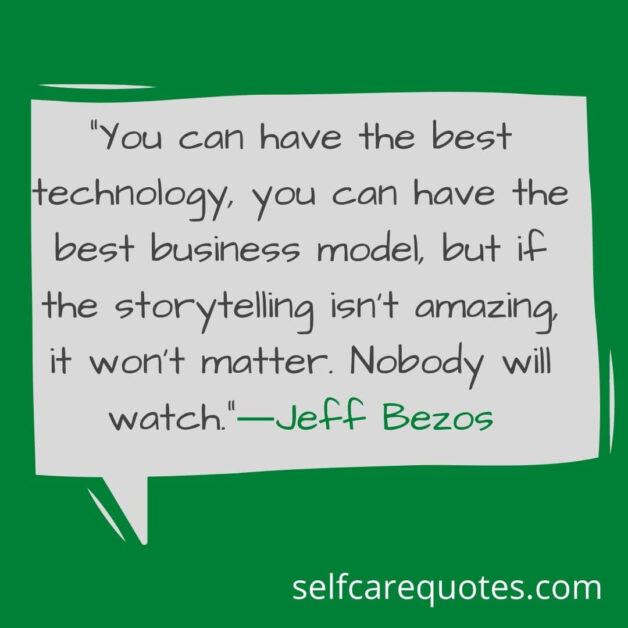 18. “Your margin is my opportunity.”―Jeff Bezos

19. “I strongly believe that missionaries make better products. They care more. For a missionary, it’s not just about the business. There has to be a business, and the business has to make sense, but that’s not why you do it. You do it because you have something meaningful that motivates you.”―Jeff Bezos

20. “All businesses need to be young forever. If your customer base ages with you, you’re Woolworth’s.”―Jeff Bezos

22. “There are two ways to extend a business. Take inventory of what you are good at and extend out from your skills. Or determine what your customers need and work backwards, even if it requires learning new skills.”―Jeff Bezos

23. “Friends congratulate me after a quarterly-earnings announcement and say, ‘Good job, great quarter.'” “And I’ll say, ‘Thank you, but that quarter was baked three years ago.'”―Jeff Bezos

24. “All of my best decisions in business and in life have been made with heart, intuition, guts… not analysis.”―Jeff Bezos

25. “Sometimes we measure things and see that in the short term they actually hurt sales, and we do it anyway.”―Jeff Bezos

26. “We are comfortable planting seeds and waiting for them to grow into trees.”―Jeff Bezos

27. “If you’re not flexible, you’ll pound your head against the wall and you won’t see a different solution to a problem you’re trying to solve.”―Jeff Bezos

28. “If you never want to be criticized, for goodness’ sake don’t do anything new.”―Jeff Bezos 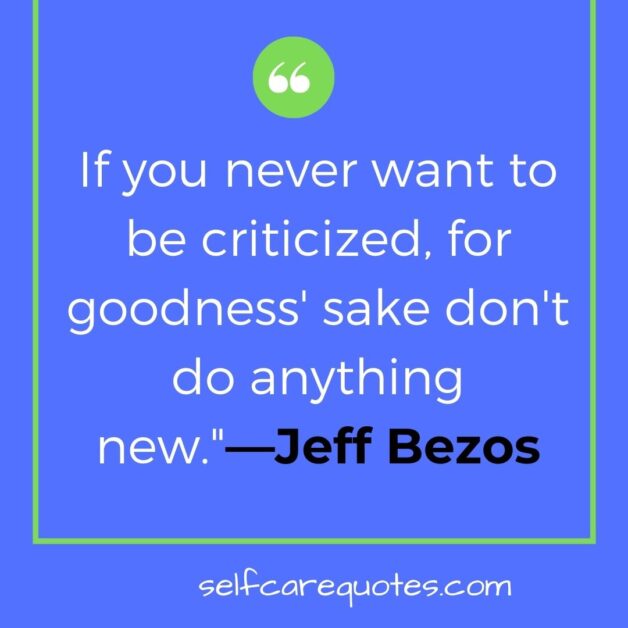 30. “We understand that and believe in failing early and iterating until we get it right. When this process works, it means our failures are relatively small in size (most experiments can start small), and when we hit on something that is really working for customers, we double-down on it with hopes to turn it into an even bigger success.”―Jeff Bezos

31. “When you look at something like, go back in time when we started working on Kindle almost seven years ago…. There you just have to place a bet. If you place enough of those bets, and if you place them early enough, none of them are ever betting the company. By the time you are betting the company, it means you haven’t invented for too long.”―Jeff Bezos

32. “We take risks all the time, we talk about failure.” “We need big failures in order to move the needle. If we don’t, we’re not swinging enough. You really should be swinging hard, and you will fail, but that’s okay.”―Jeff Bezos

33. “We all know that if you swing for the fences, you’re going to strike out a lot, but you’re also going to hit some home runs.”―Jeff Bezos

34. “The difference between baseball and business, however, is that baseball has a truncated outcome distribution. When you swing, no matter how well you connect with the ball, the most runs you can get is four. In business, every once in a while, when you step up to the plate, you can score 1,000 runs.”―Jeff Bezos

35. “If you’re not stubborn, you’ll give up on experiments too soon.”―Jeff Bezos

36. “Failure and invention are inseparable twins. To invent you have to experiment, and if you know in advance that it’s going to work, it’s not an experiment.”―Jeff Bezos

37. “I think frugality drives innovation, just like other constraints do. One of the only ways to get out of a tight box is to invent your way out.”―Jeff Bezos

39. “You have to be willing to be misunderstood if you’re going to innovate.”―Jeff Bezos

40. “If you double the number of experiments you do per year, you’re going to double your inventiveness.”―Jeff Bezos

41. “Invention requires a long-term willingness to be misunderstood. You do something that you genuinely believe in, that you have conviction about, but for a long period of time, well-meaning people may criticize that effort. When you receive criticism from well-meaning people, it pays to ask, ‘Are they right?’ And if they are, you need to adapt what they’re doing. If they’re not right, if you really have conviction that they’re not right, you need to have that long-term willingness to be misunderstood. It’s a key part of invention.”―Jeff Bezos

42. “One common pitfall for large organizations – one that hurts speed and inventiveness – is ‘one-size-fits-all’ decision making…The end result of this is slowness, unthoughtful risk aversion, failure to experiment sufficiently, and consequently diminished invention. We’ll have to figure out how to fight that tendency.”―Jeff Bezos

43. “We innovate by starting with the customer and working backwards. That becomes the touchstone for how we invent.”―Jeff Bezos

45. “Market research doesn’t help. If you had gone to a customer in 2013 and said, ‘Would you like a black, always-on cylinder in your kitchen about the size of a Pringles can that you can talk to and ask questions, that also turns on your lights and plays music?’ I guarantee you they’d have looked at you strangely and said, ‘No, thank you.'”―Jeff Bezos

46. “I do get asked, quite frequently ‘What’s gonna change in the next 10 years?’ I’m rarely get asked, and it’s probably more important — and I encourage you to think about this — is the question what’s not going to change? The answer to that question can allow you to organize your activities. You can work on those things with the confidence to know that all the energy you put into them today is still going to pay dividends in the years to come.”―Jeff Bezos

47. “To get something new done you have to be stubborn and focused, to the point that others might find unreasonable.”―Jeff Bezos

49. “If you’re watching your competitors, you’re unlikely to invent a bunch of stuff on your own.”―Jeff Bezos

50. “Me-too companies have not done that well over time.”―Jeff Bezos

“In the end, we are our choices. Build yourself a great story.”―Jeff Bezos

“Cleverness is a gift, kindness is a choice. Gifts are easy — they’re given after all. Choices can be hard.”―Jeff Bezos

“If I have three good decisions a day, that’s enough,” he said. “They should just be as high quality as I can make them”―Jeff Bezos

“We see our customers as invited guests to a party, and we are the hosts. It’s our job every day to make every important aspect of the customer experience a little bit better.”―Jeff Bezos

“The balance of power is shifting toward consumers and away from companies… The right way to respond to this if you are a company is to put the vast majority of your energy, attention and dollars into building a great product or service and put a smaller amount into shouting about it, marketing it.”―Jeff Bezos

“We don’t focus on the optics of the next quarter; we focus on what is going to be good for customers.”―Jeff Bezos

We invent before we have to. These investments are motivated by customer focus rather than by reaction to competition. We think this approach earns more trust with customers and drives rapid improvements in customer experience – importantly – even in those areas where we are already the leader.”―Jeff Bezos

“One advantage — perhaps a somewhat subtle one — of a customer-driven focus is that it aids a certain type of proactivity. When we’re at our best, we don’t wait for external pressures. We are internally driven to improve our services, adding benefits and features, before we have to. We lower prices and increase value for customers before we have to.”―Jeff Bezos

The birth year of Jeff Bezos is 1964. He was born in New Mexico of the United States. His biological fathers’ name is Ted Jorgensen, and he was a bike shop owner. Jeffrey’s mother’s name is Jacklyn. Jeff Bezos’ parents separated from each other.

Jeff Bezos admitted to the River Oaks Elementary School. When he was a school student, he showed scientific interest. At this time, Bezos had proficiency in the technological aspect. Later, he had to admit to the Miami Palmetto High School as his family moved to Miami.

At the University of Florida, Jeff Bezos attended a Science related training program. He graduated from Princeton University. He also completed his B.S.E ( Bachelor of Science in Engineering) in Computer Science and Electrical Engineering.

At the beginning of the career, Jeff Bezos worked at Fitel. We also find him working in the banking industry. In Bankers Trust Bank, he worked as a product manager. Later, he joined the D.E. Shaw & Co. In 1994, Jeff Bezos founded ‘Amazon’. The first office of ‘Amazon’ is his garage. The primary name of ‘Amazon’ is ‘Cadabra’. Later, Jeff Bezos changed his company’s name to ‘Amazon’. At first, it was a bookstore. Then he added other consumer goods, music, and videos. In2000, Jeff Bezos also founded ‘Blue Origin’. He owns the ‘The Washington Post’.

We also find that Jeff Bezos was a brilliant student from his school life. He won the Silver Knight Award. He has achieved success both in his academic life and professional life. Jeff Bezos always suggests us to work with amusement. If we find pleasure in our work, then we can give more concentration to it. He motivates us to increase our tolerance with the criticisms of our work.

Jeff Bezos says that our new experience of work always comes with criticisms. We should not bother about the critics. Jeff Bezos’ suggestions and advice are valuable for us. We should follow him and his words to improve our work.