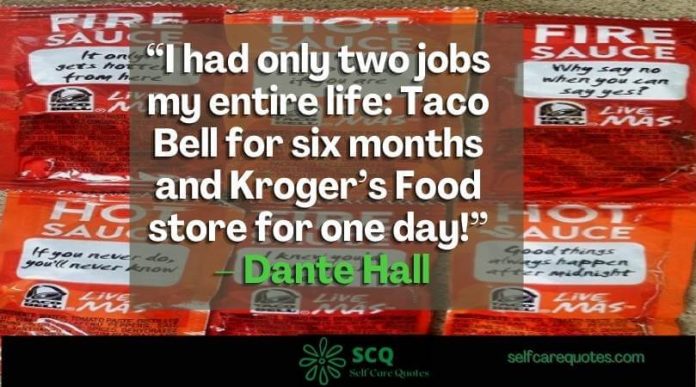 Taco Bell is a well-known Mexican food restaurant that has many sauces for their customers to choose from. The Salsa Ranchera sauce has a rich, hearty flavor that complements any taco or burrito. They offer mild, medium, and hot sauce for those who enjoy spicy foods. Other sauces are the Chipotle Mayo Feta Cheese, Green Salsa Verde, and Creamy Jalapeno Sauce.

BEST WINGMAN EVER
Bike tires scare me.
Can I drive?
Can I ride shotgun? 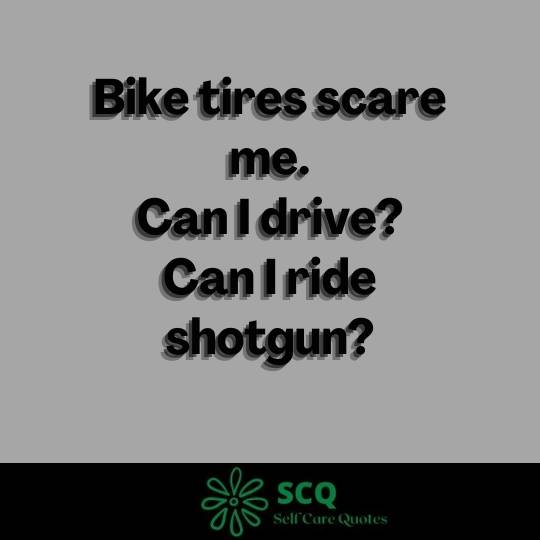 Chalupacabra: Legendary Beast
Consider yourself warned
Dibs on the taco.
“Do you add sauce left to right, or right to left?”
Does the Spork go on the right or left?
DON’T WAIT UP
Friend request accepted.

Have you people call my people.
Hello.
Help! I can’t tell where I am. It’s dark and I can hear laughing.
Help! I’m a genie trapped in a sauce packet.
How many of these do you already have in your glove compartment?
I collect straws.
I GOT THIS
I had so much fun!
“I love you, I’m just not in love with you.”
I M A HOT T R U 2?
“I saw the way you looked at Mild. It’s ok, I forgive you.”
I see how you look at other sauces.
I spontaneously bust out in Ninja moves.
I WILL IF YOU WILL…
“If you never do, you’ll never know”
“If you throw this, would it be a flying saucer?”
I’m a people packet.
I’m in good hands now.
I’m just doing this between films.
I’m not just another pretty face.
I’m taking the day off. See next packet.
I’m up for it if you are
I’m with the band.
“Is it me, or is it hot in here?”
It only gets hotter from here
It was Fire’s idea…
“It’s okay, you can say it. I love you too.”
I’ve been through fire for you!

Ketchup? Puh-leese.
Live life one sauce packet at a time.
Make a wish.
“Meet me tomorrow: same time, same place.”
Mild sauce…the new ketchup.
Mmmm…sauce.
MOST LIKELY TO:
My other taco is a Chalupa.
My sauce is an honor student at Taco State.
Nice palm. I read a great deal of pleasure in your future.
Not it!
Not to be used as a floatation device.
Open quickly…I’m burning up in here.
Pick me! Pick me!
Please turn me over so I can finish tanning my back.
Polly want a taco?
Promise you’ll text me in the morning.
Roadtrip?
Save a bun. Eat a taco.
Scratch & Sniff: Gotcha!
“Single hot sauce seeking friendship, maybe more.”
Tah Dah!

“Thanks for rescuing me, Mild was getting on my nerves.”
The feeling is mutual.
The official sauce of Taco Bell.
The road to mediocrity is littered with empty ketchup packets.
“This is gonna end with you eating me, isn’t it?”
This space for rent. Inquire within.
“Use your stomach, not your mind.”
Warning! You’re about to make a taco very happy.
What are you other two wishes?
“When I grow up, I want to be a waterbed.”
Where are you taking me?
Where have you been all my life?
Why order a taco when you can ask it politely?
Will you marry me?
Will you scratch my back?
Willing to relocate.
You gonna finish that?
You had me at taco.
You have chosen wisely!
YOU’RE BUYING

“I have a rule: I want the pilot flying me up in the air at 30,000 feet to make more than a guy working at Taco Bell.” – Michael Moore

“I love Taco Bell. Whenever I go there I can get anything on the menu and be totally happy.” – Chris Massoglia 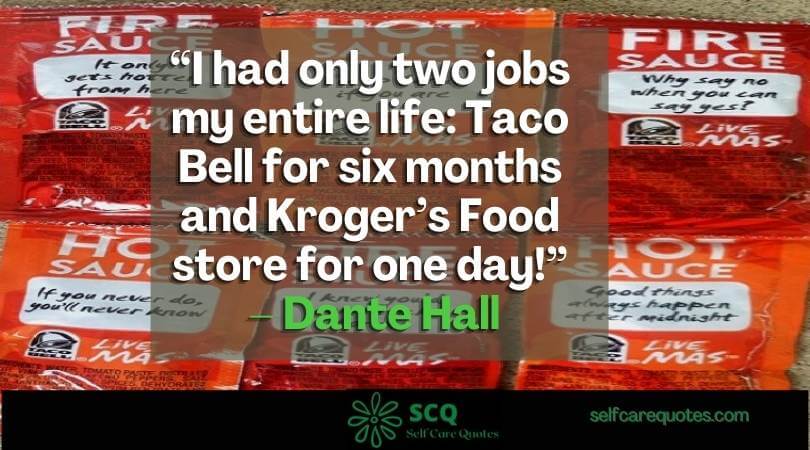 “I had only two jobs my entire life: Taco Bell for six months and Kroger’s Food store for one day!” – Dante Hall

“Montana’s ranchers raise the best cattle in the world. If Taco Bell needs to beef up, they can give their customers the highest quality meat by using Montana beef, and in the process, supporting agriculture jobs in Montana.” – Jon Tester

“This is interesting. Researchers have found that people who drive drunk are more dangerous on the road than drivers who are high on marijuana. Don’t get too excited. It’s mostly because the drivers using marijuana are just sitting in the Taco Bell drive-through.” – Jimmy Fallon

“Popeyes and Taco Bell. I try to be healthy, but they’re just so good.” – Kate Spade

“I’m totally normal. I think it’s obnoxious when people demand limos or bodyguards. I eat at McDonald’s or Taco Bell. My parents always taught us to be humble. We’re not spoiled.” – Paris Hilton

“The country of Mexico has just gotten its first Taco Bell. You’re Welcome. Finally, Mexicans will have access to… Mexican food. Bon appetit. I can’t imagine how confused they will be when they get a taco.” – Jon Stewart

“A lot of American companies are now moving into Iraq. Iraq now has Pizza Hut, Subway, Taco Bell and Popeye’s fried chicken. So, great, instead of oil for food, we’re giving them oil in food.” – Jay Leno

“I write what I want to write. Period. I don’t write novels-for-hire using media tie-in characters, I don’t write suspense novels or thrillers. I write horror stories. And if no one wants to buy my books, I’ll just keep writing them until they do sell–and get a job at Taco Bell in the meantime.” – Bentley Little

“The way America sees Mexico, if they have any sense of it, is like Taco Bell. Our countries are neighbors, and the only hard food to get in America is true Mexican. It’s impossible to find, even in L.A. Why is that?” – Alejandro Gonzalez Inarritu 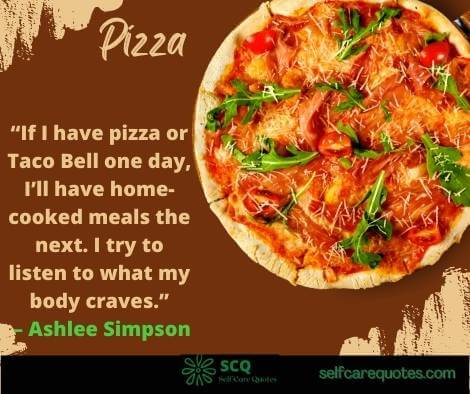 “If I have pizza or Taco Bell one day, I’ll have home-cooked meals the next. I try to listen to what my body craves.” – Ashlee Simpson

“The decorator of Las Colinas must have been a great admirer of both early Aztec and late Taco Bell architectural styles.” – Ilona Andrews

“I’d take a helicopter up and throw microwave ovens down on the Taco Bell.” – Douglas Coupland

“We [Desaparecidos] have to make the message and the music and the packaging as appealing as possible – as Taco Bell as possible: mediocre and no one can be offended by it and everyone can sort of enjoy it and we can play it on the radio.” – Conor Oberst

“When I started playing music at East Tennessee State University I would sit on a stool with a tip jar in front of me and play four hours a night at a college bar called Quarterback’s Barbecue. I wasn’t thinking about doing it for a living. I was just making enough money to go to Taco Bell every day. People were eating chips, drinking beer and not listening to me. I’d had three or four years of people ignoring me, and I’d kind of gotten used to it.” – Kenny Chesney

“Seems Google management figured out it is cheaper, happier and more productive to take care of their employees and create a positive work environment than to burn them to a crisp, make them afraid of the future, and send them off into the highways and byways of California in search of a Taco Bell for lunch.” – Joe McNally

“If I’d had to work at Taco Bell I’d have still been out at night trying to play music.” – Tom Petty

“I was 35 years old and not in the best of shape. I spent many late nights playing music, drinking beer, and eating Taco Bell.” – Bryan Hayes

“Someone recently played ‘Combination Pizza Hut and Taco Bell’ by Das Racist. That should be my theme song.” – Dhani Harrison

“Do you wanna do something fun? Wanna go to Taco Bell?” – Karen Smith

Finally, we can learn a lot from our elders and we can work together to help them and their families. Sharing the recipe for the Taco Bell Sauce is a great way to encourage healthy eating and prevent obesity.

We can work together as a community to help those who are aging by providing them with healthy food options.

Recommended For You 50 Top Fruit Quotes