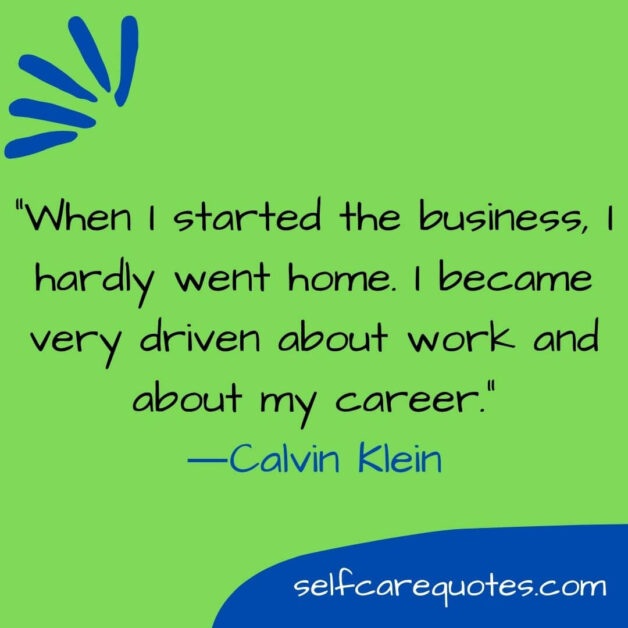 Calvin Klein, one of America’s leading fashion designers, first made a name for himself by producing good quality simplistic sportswear. By sometimes creating shocking and often news-making advertising campaigns, he kept his name popular with the public. Besides sportswear, Kelvin also introduced perfumes, watches, and jewelry in the market.

In 1942, Klein was born in the Bronx, New York, where he spent his entire childhood. He taught himself to design and sew as a youth. He attended the Art and Design High School, moving on to the prestigious Technology Institute of Fashion. He spent five years in a coat and suit house on New York City’s Seventh Avenue as an intern, working long nights and weekends to perfect his designs. Now we will discuss Calvin Klein Quotes.

“When I started the business, I hardly went home. I became very driven about work and about my career.”―Calvin Klein

“I won’t allow myself to have tremendous fear.”―Calvin Klein

“I love that in the clothes, the body is what stands up, the person.”―Calvin Klein

“The clothes are softer. There’s a whole mood towards pretty, soft, easy, romantic, full, relaxed, and it’s reflected in the makeup and in the hair.”―Calvin Klein

“I don’t think about my fame very much.”―Calvin Klein

“I don’t trust a lot of journalists.”―Calvin Klein

“If I allow journalists to describe a collection and they make mistakes, I’m upset, because the retractions are never noticed.”―Calvin Klein

“Levi’s can produce many more Western jeans than we can and make them at a better price.”―Calvin Klein

“No 27-year-old has the experience to run a company that does a quarter of a billion dollars a year in sales.”―Calvin Klein

“I’ve met people who didn’t even know there was a Calvin Klein; they thought it was just the name of a product.”―Calvin Klein

“It’s fun seeing my label on someone’s behind – I like that.”―Calvin Klein

“My wardrobe consists of antique clothes, many of my designs, plus shoes and shirts from Brooks Brothers and Paul Stuart.”―Calvin Klein

“People in their 70s can still have incredible lives. Health is the most important thing.”―Calvin Klein

“People read things into my commercials that don’t even exist.”―Calvin Klein

“What we’re doing is fun – if you have any sense of humor at all!”―Calvin Klein

“Women’s Wear Daily can do more than any other publication to establish a designer.”―Calvin Klein

“Either very curved and shaped to a woman’s body or cut straight from the shoulder and boxy and short.”―Calvin Klein

“I couldn’t have gotten to the place where I am if I had been tripping on acid during the day.”―Calvin Klein

“I’ve been strong and determined all my life about many things I’ve wanted.”―Calvin Klein

“Anyone who is secure about herself shouldn’t be threatened by the ads I do.”―Calvin Klein

“I don’t always want my opinion known. What little privacy I have left I’d like to maintain.”―Calvin Klein

“I’m crazy, and I don’t pretend to be anything else.”―Calvin Klein

“Some people feel that what we’re doing makes no sense, that it’s just a waste of money. But it’s working.”―Calvin Klein

“I have the New York Daily News to thank for the jeans controversy.”―Calvin Klein

“I love Brooke. Exploiting her was never my intention.”―Calvin Klein

“I love women. I’m trying to do beautiful things with them. I’m not trying to insult them. My life is not about that.”―Calvin Klein

“I’m in a business where no one cares about anything except how well your last collection sold.”―Calvin Klein

“People have told me about organized crime in the fashion industry, but I can’t talk about that. I’m looking to stay alive.”―Calvin Klein

“People who run a ready-to-wear company are businessmen rather than production or design people.”―Calvin Klein

“The only way to advertise is by not focusing on the product.”―Calvin Klein

“There has been a change in men’s attitudes toward their clothes. Men are more aware of fashion; they’re not afraid of it.”―Calvin Klein

“The bed sheers … came from our ready-to-wear collection,”―Calvin Klein

“I certainly feel that an adult woman has a right to determine what happens to her life and body.”―Calvin Klein

“I still drink vodka; I’m not an advocate of drinking, but I’m no angel. I don’t like grass, because it just makes me hungry.”―Calvin Klein

“I’m not trying to be Mr. Universe, but I want to stay in shape.”―Calvin Klein

“It seems there’s always another rumor about my life; some people are simply talked about more than others.”―Calvin Klein

“Nothing earth-shattering has happened in men’s fashion. How much can you do with men’s clothes?”―Calvin Klein

“Traditionally, the sample is always better than the stock you deliver to the store.”―Calvin Klein

“I couldn’t have attended half the parties that I was supposed to have been to according to the newspapers. It bothers me.”―Calvin Klein

“I guess I don’t have a proper perspective on my fame; if I did, I don’t think I’d like it.”―Calvin Klein

“I’m not a drug addict. My wild period wasn’t about drugs; it was about sexual freedom.”―Calvin Klein

“If you really love someone and care about him, you can survive many difficulties.”―Calvin Klein

In 1970, Calvin Klein established the designer jeans craze single-handedly and then redefined fashion ads in the 1980s. From socks to perfume, his name adorns all today. And a fashion empire has been constructed through his trendy designs and business acumen. His mother, who nurtured in him a love of art and fashion, largely inspired Klein. While other kids played stickball, Klein searched for a dress at a discounted price offered in different stores of New York with his mother. Klein, a loner, taught himself how to draw and knit.

Klein admits that he always knew he wanted to be a designer of clothes. Klein married Jayne Centre after completing his graduation from the Fashion Institute of Technology in New York City in 1962. He started working in the garment district as a $75-per-week trainee sketching designs. At that time, copying was common for fashion since no original designs came out of America. But Klein wished this to improve. He imagined starting a fashion business of his own, and nothing would deter him-not even the fact that he was almost broken. So Klein started working in his father’s grocery store to make some extra cash for his business.

Klein also endured much in his married life. In 1964, Klein married Jayne Centre, but they got separated in 1974. They had one girl, Marci. He surprised the industry by marrying one of his design assistants, Kelly Rector, in 1986, after combating reports of a bisexual, drug-related lifestyle and AIDS. Due to the influence of such negative press, it was evident that Calvin Klein’s sales might fall. But surprisingly, the sales were not affected a bit due to such negative comments.

The second child of Flo and Leo Stern was Klein. The family lived pretty comfortably. Klein’s grandma was a dressmaker and from her, he acquired his love of sewing. His love of art and fashion was encouraged by his mother. Klein completed his High School of Art and Design, which helped him to develop a career in advertising and drafting. Klein started a business with his childhood friend Barry Schwartz in 1968.

Bonwit Teller accidentally placed an order in Calvin Klein, which helped Klein change his clothing business’s fate. In 1996, Time magazine identified Klein as one of the twenty five most influential Americans. Three times in a row (1973–1975), Klein received the coveted Coty Award, being the youngest designer ever to have that distinction. He also received the Council of Fashion Designers of America Award in 1982, 1983, and 1986.