Quotes About Self Preservation 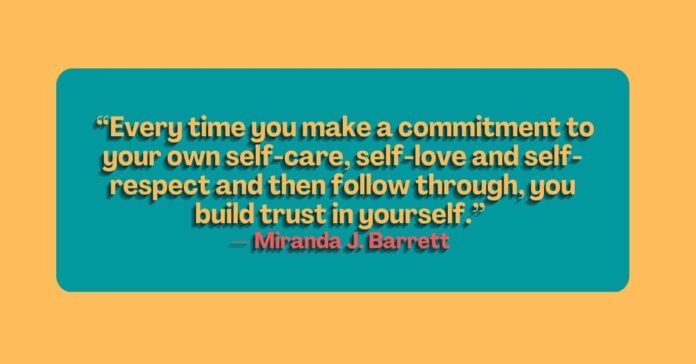 Quotes About Self Preservation

1. “The feudal concept of self-preservation is poisoned at the core by the virulent assumption of master and man, of potentate and slave, of external and internal suppression of the life urge of the only one – of its faith in human sacrifice as a means of salvation.” — Louis Sullivan

2. “My definition, the definition that I’ve always believed in, is that esprit de corps means love for one’s own military legion – in my case, the United States Marine Corps. It means more than self-preservation, religion, or patriotism. I’ve also learned that this loyalty to one’s corps travels both ways: up and down.” — Chesty Puller

3. “As a matter of self-preservation, a man needs good friends or ardent enemies, for the former instruct him and the latter take him to task.” — Diogenes 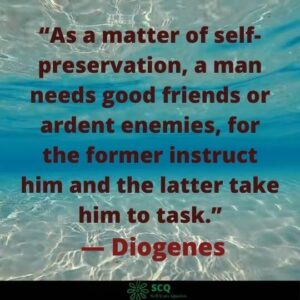 4. “It’s easy to give up all of those things important for self-preservation. You need to keep your sleep, exercise and retain good eating habits.” — Susan Fletcher

5. “Every time you make a commitment to your own self-care, self-love and self-respect and then follow through, you build trust in yourself.” — Miranda J. Barrett

6. “Responsible global behavior is ultimately an act of self-preservation of, by, and for the global beast that modern technological humanity has become.” — David Grinspoon

7. “Sometimes when things are way too big and I can’t control it, I do sort of a weird thing where I kind of check out a little bit. It’s all about self-preservation for me.” — Hoda Kotb

8. “The right of nature… is the liberty each man hath to use his own power, as he will himself, for the preservation of his own nature; that is to say, of his own life.” — Thomas Hobbes

9. “Of course I was wearing make-up, I never went anywhere without red lipstick for 25 years! It was a form of self-preservation for me to continue to wear lipstick even though my face was broken.” — Nan Goldin

10. “Unlike earlier black-power movements that tried to fight or segregate for self-preservation, Black Lives Matter aligns with the dead, continues the mourning, and refuses the forgetting in front of all of us.” — Claudia Rankine

11. “The first law of nature is self-preservation. Cut off that which may harm you. But if it is worth preserving, and is meaningful, nourish it and have no regrets. Ultimately, this is true living and love of self…from within.” — T.F. Hodge 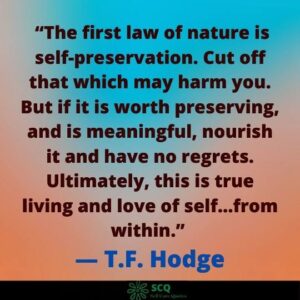 12. “Want of foresight, unwillingness to act when action would be simple and effective, lack of clear thinking, confusion of counsel until the emergency comes, until self-preservation strikes its jarring gong – these are the features which constitute the endless repetition of history.” — Winston Churchill

13. “This is not to say that one should not be angered at an injustice or speak out against whatever violates one’s security. That is the first law, the law of self-preservation. But we must consider the motives behind the selection of an enemy. Perhaps nothing more is threatened beyond the threat of not having an enemy.”

14. “For the several thousands of years before they became firefighters and physicians, women were sirens, enchantresses, snares. At times it seems as if female powerlessness is male self-preservation in disguise. And for millennia, this has made for a zero-sum game: A woman’s intelligence was a man’s deception.” — Stacy Schiff

15. “A common excuse for self-preservation through disobedience is offense. There is a false sense of self-protection in harboring an offense. It keeps you from seeing your own character flaws because the blame is deferred to another. You never have to face your role, your immaturity, or your sin because you see only the faults of the offender.” — John Bevere

16. “When a nation is on the downward path, when it feels its belief in its own future, its hope of freedom slipping from it, when it begins to see submission as a first necessity and the virtues of submission as measures of self-preservation, then it must overhaul its God.” — Friedrich Nietzsche

17. “Because your self-preservation instinct keeps telling you, “Unless you have walls you are not safe,” unconsciously you keep building them. Later, you struggle with them. This is an endless cycle. But creation is not unwilling to open to you the doors to the beyond. It is not creation’s unwillingness that you are struggling with. You are struggling with the walls of resistance that you have built around yourself.” – Sadhguru

18 “Any time you approach anything in fear and aggression or in self-preservation mode, you are going to scare people off. But if you go in love, with the idea of being the feet and hands of Christ, if you go with the idea of showing the love of Christ, then they become softened because love changes all.” — Ron Hall

19. “In America, the political system just is paralyzed for whatever reason. Maybe I’m right, maybe I’m wrong, in that it’s just become this giant blob bureaucracy, the primary objective is self-preservation, and the definition of self-preservation is don’t do anything because then you continue to illustrate where you’re needed.” — Rush Limbaugh

20. “I was young, and by instinct of self-preservation I had to collect my energy on something, if I were not to be whirled away with the dusk on the farm-roads, or the smoke on the plain. I begun in the evenings to write stories, fairy-tales, and romances, that would take my mind a long way off, to other countries and times.” — Isak Dinesen

21. “Marriage is the most obvious public practice about which information is readily available. When combined with the traditional Jewish concern for continuity and self-preservation – itself only intensified by the memory of the Holocaust – marriage becomes the sine qua non of social membership in the modern Orthodox community.” — Noah Feldman

22. “Maybe that’s why Claire had perfected the art of invisibility. It was a form of self-preservation. You couldn’t resent what you could not see. She was so quiet, but she noticed everything. Her eyes tracked the world like it was a book written in a language that she could not understand. There was nothing timorous about her, but you got the feeling that she always had one foot out the door. If the situation got too hard, or too intense, she would simply disappear.” — Karin Slaughter

23. “You owe yourself the love that you freely give to others.” “Silence was the key to self-preservation.” — Laura Wiess 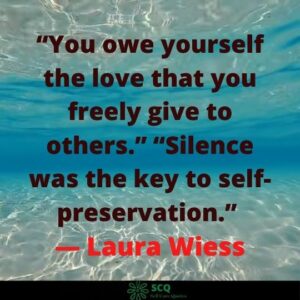 24. “Self-love is the instrument of our preservation.” — Voltaire

25. “Self-preservation is the first law of nature.” — Samuel Butler

26. “You can’t pour from an empty cup. Take care of yourself first.” “The strongest human instinct is self-preservation.” — Iris Watts

27. “I’m still learning to the love parts of myself that no one claps for.” “Self-preservation is an enemy of love.” — Roxanna Aliba Kazibwe

29. “Self-Preservation: You are all you have. It is ok to put yourself first.” “I have an instinct for survival, for self-preservation.” — Julian Barnes 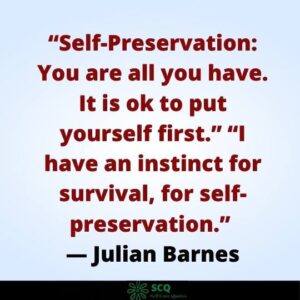 30. “Self-care is not self-indulgence, it is self-preservation.” — Audre Lorde

31. “You are not required to set yourself on fire to keep other people warm.” “Self-preservation is an important thing to me.” — Floyd Mayweather, Jr.

32. “I do watch sports. How could I not? Just for self-preservation.” — Joe Buck

33. “Self-preservation is the first principle of our nature.” — Alexander Hamilton

34. “I have to take care of myself. It’s about self-preservation.” — Danielle de Niese 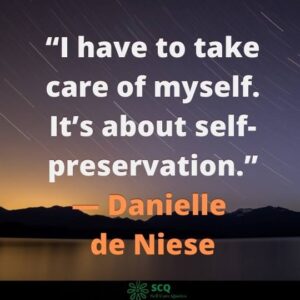 35. “Politicians have an acutely honed instinct for self-preservation.” — Steve Schmidt

36. “Self-discovery begins with self-love. You have to love yourself enough to find yourself.” — Nitin Namdeo

37. “That level of responsibility drastically conflicts with my belief in self-preservation by inactivity.” — C.L. Allen

38. “Losing weight for the sake of our health and for self-preservation is our first responsibility.” — Felicity Luckey

39. “Strong people will automatically stop trying if they feel unwanted. They won’t fix it or beg. They will jut walk away.”

40. “Caring for myself is not self-indulgence, it is self-preservation, and that is an act of political warfare.” — Audre Lorde

41. “We as a country, our lust for entertainment has sort of superseded our sense of self-preservation.” — Sam Levinson

42. “But the theory is also, once the shooting starts, negotiations stop. Then it’s self-preservation.” — Michael Chitwood

43. “When you’ve spent your whole life listening to others, it takes courage to pay attention to the sound of your own voice.” “By taking care of myself I have so much more to offer the world than I do when I am running on empty.” — Ali Washington
“It’s not selfish to love yourself, take care of yourself, and to make your happiness a priority. It’s necessary.” — Mandy Hale

45. “He was gifted with the sly, sharp instinct for self-preservation that passes for wisdom among the rich.” — Evelyn Waugh

46. “Self-preservation shouldn’t be the first instinct in politics. It should be doing the right thing for the country.” — Seth Moulton

47. “As far as keeping my sanity, it’s something I’ve only recently tried to focus on as a means of self-preservation.” — Anthony Green

48. “An insatiable appetite for glory leads to sacrifice and death, but innate instinct leads to self-preservation and life.” — Jose Marti

49. “When the collective mentality of any organization is self and self-preservation first, it’s a sure sign of pending doom.” — Chris Fussell