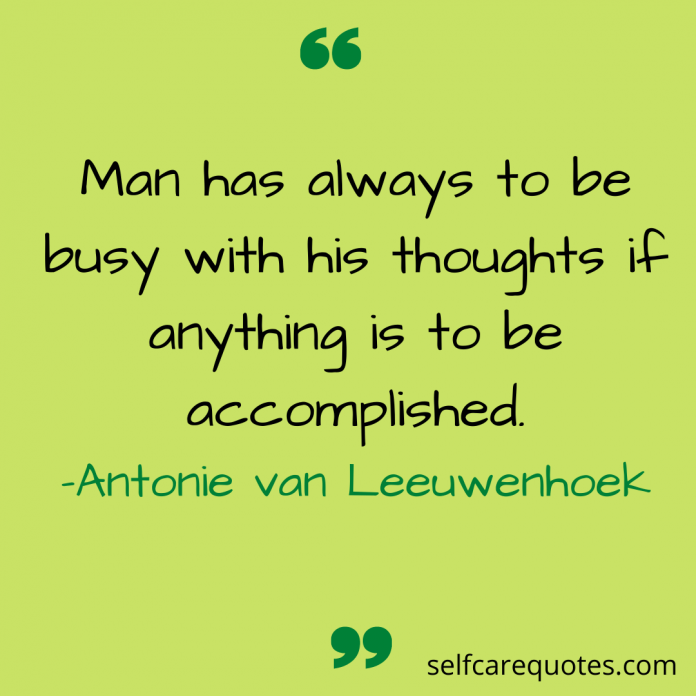 Who was Antonie van Leeuwenhoek?

We are living in the advanced 21st century, and this century is modernized with many modern technologists. We are highly indebted to our ancestors for the technical development of the twentieth century. Our today’s modern world is the result of thousand inventions of our ancestors. There are a lot of inventions behind the technological revolution of the twentieth century. The advanced world is the outcome of the hard work of scientists. 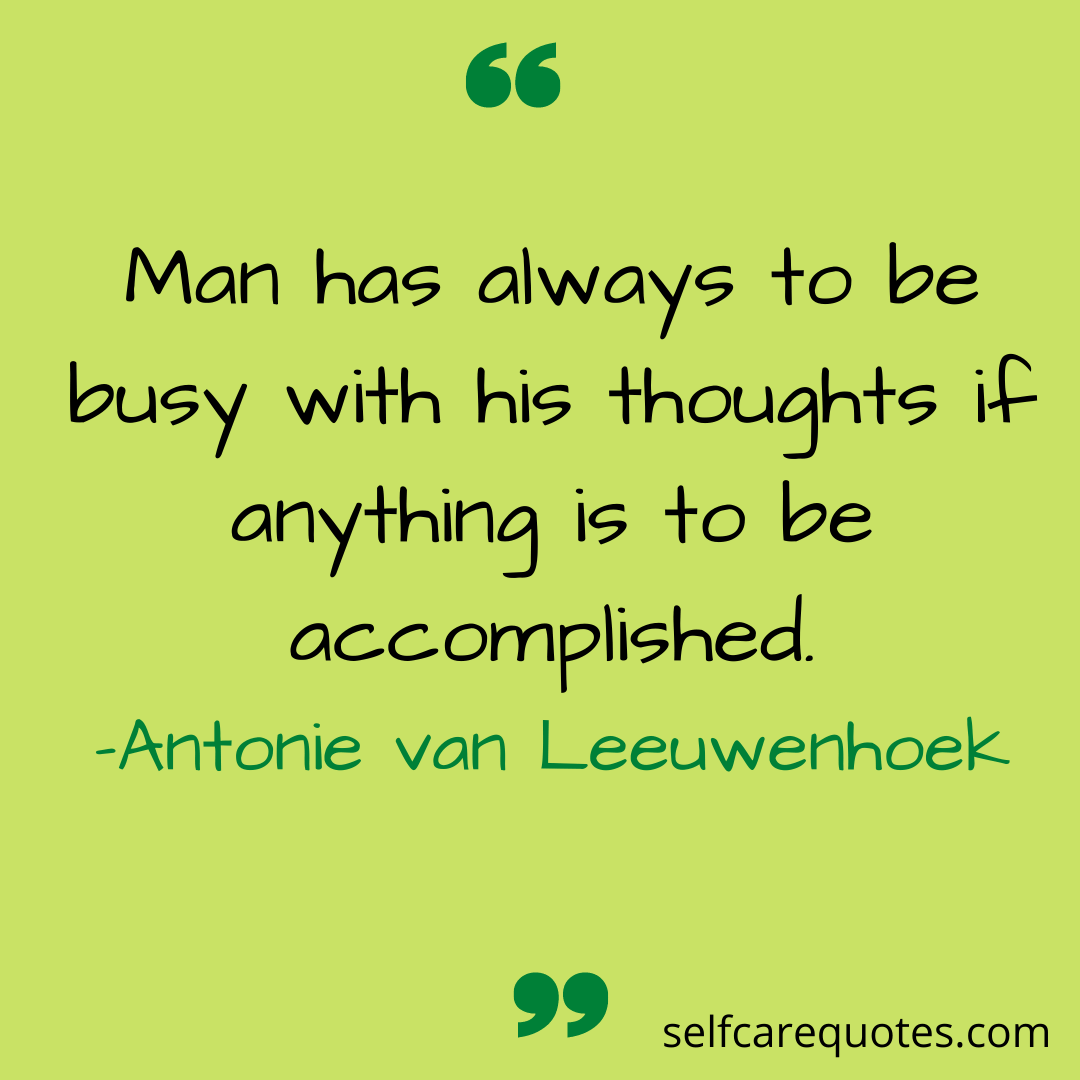 Man has always to be busy with his thoughts if anything is to be accomplished. -Antonie van Leeuwenhoek

3. I’ve spent more time than many will believe [making microscopic observations], but I’ve done them with joy, and I’ve taken no notice those who have said why take so much trouble and what good is it? -Antonie van Leeuwenhoek 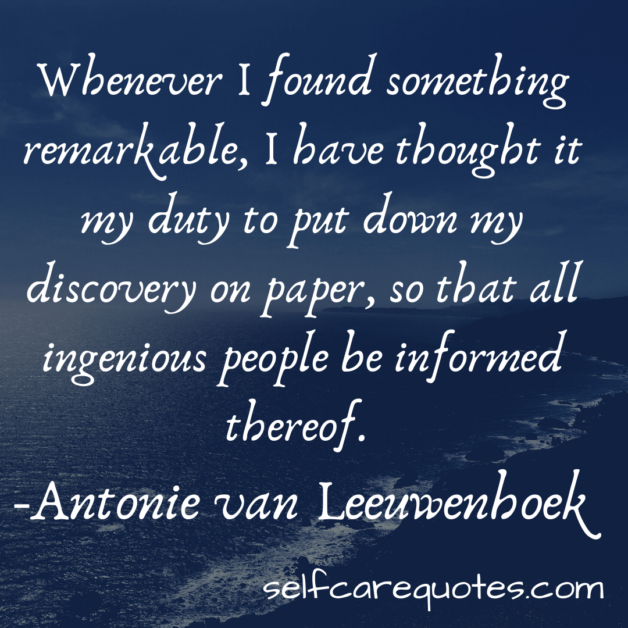 Whenever I found something remarkable, I have thought it my duty to put down my discovery on paper, so that all ingenious people be informed thereof. -Antonie van Leeuwenhoek

5. I observed certain animalcules, within whole bodies I saw so quick a motion as to exceed belief; they were about the size of a large grain of sand, and their bodies being transparent, that the internal motion could plainly be seen. Among other things, I saw in the body of one of these animalcules a bright and round corpuscle, placed near the head, and in which a very wonderful swift motion was to be seen, consisting of an alternate extension and contraction. This particle I concluded to be the heart. -Antonie van Leeuwenhoek

6. [M]y work, which I’ve done for a long time, was not pursued in order to gain the praise I now enjoy, but chiefly from a craving after knowledge, which I notice resides in me more than in most other men. And therewithal, whenever I found out anything remarkable, I have thought it my duty to put down my discovery on paper, so that all ingenious people might be informed thereof. -Antonie van Leeuwenhoek

7. Passing just lately over this lake, … and examining this water next day, I found floating therein divers earthy particles, and some green streaks, spirally wound serpent-wise, and orderly arranged, after the manner of the copper or tin worms, which distillers use to cool their liquors as they distill over. The whole circumference of each of these streaks was about the thickness of a hair of one’s head. … all consisted of very small green globules joined together: and there were very many small green globules as well. [The earliest recorded observation of the common green alga Spyrogyra.] -Antonie van Leeuwenhoek

8. Examining this water…I found floating therein divers earthy particles, and some green streaks, spirally wound serpent-wise…and I judge that some of these little creatures were above a thousand times smaller than the smallest ones I have ever yet seen, upon the rind of cheese, in wheaten flour, mould, and the like. -Antonie van Leeuwenhoek

9. I have divers times examined the same matter (human semen) from a healthy man… not from a sick man… nor spoiled by keeping… for a long time and not liquefied after the lapse of some time… but immediately after ejaculation before six beats of the pulse had intervened, and I have seen so great a number of living animalcules… in it, that sometimes more than a thousand were moving about in an amount of material the size of a grain of sand… I saw this vast number of animalcules not all through the semen, but only in the liquid matter adhering to the thicker part. -Antonie van Leeuwenhoek

10. The 31th of May, I perceived in the same water more of those Animals, as also some that were somewhat bigger. And I imagine, that [ten hundred thousand] of these little Creatures do not equal an ordinary grain of Sand in bigness: And comparing them with a Cheese-mite (which may be seen to move with the naked eye) I make the proportion of one of these small Water-creatures to a Cheese-mite, to be like that of a Bee to a Horse: For, the circumference of one of these little Animals in water, is not so big as the thickness of a hair in a Cheese-mite. -Antonie van Leeuwenhoek

11. The 4th sort of creatures… which moved through the 3 former sorts, were incredibly small, and so small in my eye that I judged, that if 100 of them lay [stretched out] one by another, they would not equal the length of a grain of course Sand; and according to this estimate, ten hundred thousand of them could not equal the dimensions of a grain of such course Sand. There was discover’d by me a fifth sort, which had near the thickness of the former, but they were almost twice as long. The first time bacteria were observed. -Antonie van Leeuwenhoek 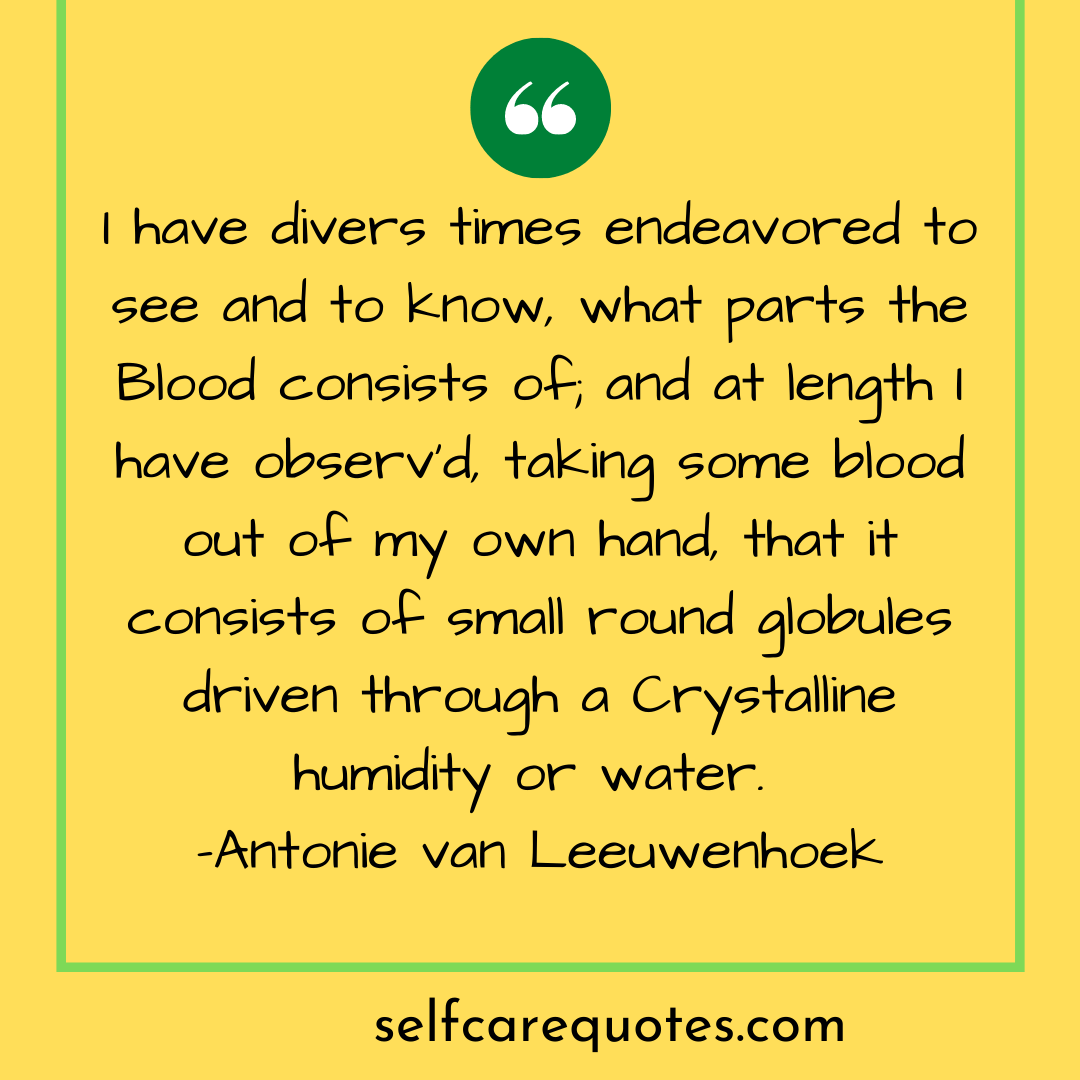 I have divers times endeavored to see and to know, what parts the Blood consists of; and at length I have observ’d, taking some blood out of my own hand, that it consists of small round globules driven through a Crystalline humidity or water. -Antonie van Leeuwenhoek

The invention of the microscope:

We have previously mentioned that Antonie worked with the thread. When he was working in his draper shop, he became interested in creating a microscopic glass to observe the threads. With this interest, he invented the powerful lenses. He was acknowledged in the Royal Society of London for his invention.

He created around five hundred optical lenses and twenty-five single- lensed microscopes. Some of his microscopes were capable of magnifying around 500 times. Antonie van Leeuwenhoek’s microscope attracted the attention of many influential people. He did not trust anyone to reveal the secret of his invention.

Antonie Van leeuwenhoek Quotes are very Motivational. If you love this quote then you can share your friends and relatives.