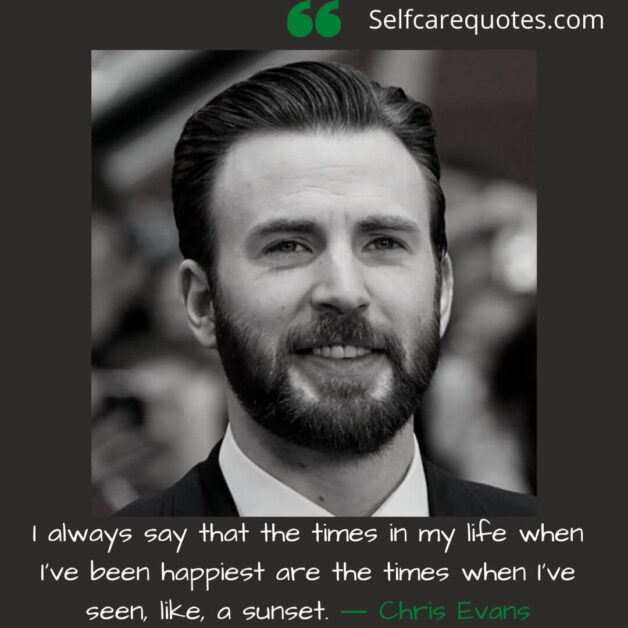 Chris Evans is a famous American actor. The original name of this renowned actor is Christopher Robert Evans. He made a special place in the hearts of the audience by playing the character ‘Captain America.’ Evans has started his career working in a comedy-drama and, its name is Opposite Sex (2000).

We also find Chris Evans’ contribution in direction. As a director, his first film is Before We Go. In 2014, Chris Evans presented this film at ‘Toronto International Film Festival.’ He also played the role of a producer and the actor in this film. We may observe the experience and brilliance of this famous actor from Chris Evans quotes.

1. I always say that the times in my life when I’ve been happiest are the times when I’ve seen, like, a sunset. ― Chris Evans

2. The point is that when I see a sunset or a waterfall or something, for a split second it’s so great, because for a little bit I’m out of my brain, and it’s got nothing to do with me. I’m not trying to figure it out, you know what I mean? And I wonder if I can somehow find a way to maintain that mind stillness. ― Chris Evans

3. I am single and not looking to be in a relationship. ― Chris Evans

4. I’m a big fan of working out on my own. I put my headphones on and I’m pretty good at self-motivating. At the end of the day, I enjoy it. Once I’m there and once I get going, I tend to love it, and I feel good. ― Chris Evans

5. I feel like my style’s always been influenced by ‘less is more.’ The coolest styles are kind of simple and classic, like a white T-shirt and jeans. Maybe you have a cool belt and cool shoes, but everything else you keep simple. ― Chris Evans

6. I was dumped at my senior prom – I was 18 and in love. We danced all night, then she got back together with her ex. It broke my heart. ― Chris Evans

7. I’ve been lucky enough – well, maybe unlucky enough – to have had a lot of friends who have had their ups and downs. And for an actor, that’s good. Life experience in any regard is good. So I’ve seen a lot and I’ve had my own experiences.― Chris Evans

8. I like girls who are self-deprecating. I like girls who make fun of themselves. If you can’t poke fun at yourself, what are you? I just want someone with a good soul. That’s about it. The rest I’m really flexible on. ― Chris Evans

9. For the youth, the indignation of most things will just surge as each birthday passes. ― Chris Evans

10. I really like women who get emotional about babies and puppies. I’ve met some incredibly cool women who are tough, but the woman you marry should have a really soft side. ― Chris Evan

11. I love having a shaved head. I’d rather not deal with hair if I don’t have to. I like not thinking about it. A shaved head and letting my beard go requires the least amount of anything. ― Chris Evans

14. I weep at everything. I love things so much – I just never want to dilute that. ― Chris Evans

15. Nothing is worse than a beautiful girl fishing for compliments by saying how gross she is. On the flip side, I find genuine humility and modesty attractive. ― Chris Evans

16. If you’re walking down the street and you smell a scent, it can take you right back to a memorable time in your life, whether it’s a moment with an ex-girlfriend or a childhood event. ― Chris Evans

17. I really try to spend as little time as possible on grooming. I think if you have a good moisturizer and a solid razor to clean up the beard, you’re golden.― Chris Evans

18. I decided to make ‘Captain America’ because I realized I wasn’t doing the film because it terrified me. You can’t make decisions based on fear. ― Chris Evans

19. I really love the sound of my dog snoring. ― Chris Evans

20. The past is the past, but if you’re overanalyzing or trying to repeat it, you’re gonna get stuck. I just had a wonderful youth, and I loved everything about it, so I really try and hang on to it. ― Chris Evans 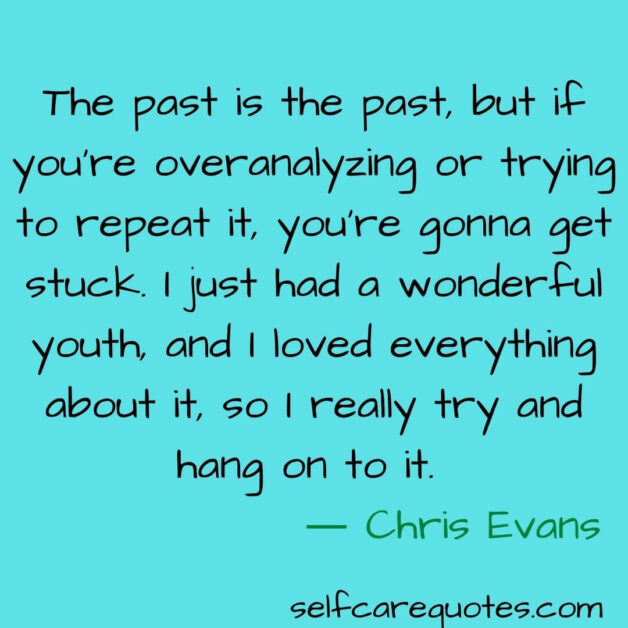 21. I love acting. It’s my playground, it let’s me explore. But my happiness in this world – my level of peace – is never going to be dictated by acting. ― Chris Evans

22. When you do one movie at a time, if one goes crazy and becomes successful, your life changes. But you can step back and catch your breath. ― Chris Evans

23. I had no idea there were so many ways you could burn yourself out. ― Chris Evans

24. My mum told me that the best thing you could give a woman was attention. ― Chris Evans

25. But my happiness in this world – my level of peace – is never going to be dictated by acting. ― Chris Evans

26. I am just enjoying my youth but I want to settle down eventually. ― Chris Evans

27. I’ve managed to do movies and still keep a lifestyle where I can go to ballgames, go to a grocery store like everybody else. ― Chris Evans

28. I am sure every movie I’ve made, even as an actor, had multiple test screenings. And I am sure there have been horrible things written about me. But I never have to see them! ― Chris Evans

29. Any time you make a movie where you’re living in a certain head space for an extended period of time, it’s tough not to take a little piece home with you. ― Chris Evans

Everything that Marvel does, it’s a chess move. Nothing is by accident. ― Chris Evans

35. If you want to be around in 10 years you’ve got to do something to differentiate yourself from the pack. ― Chris Evans

36. I decided to make ‘Captain America’ because I realized I wasn’t doing the film because it terrified me. You can’t make decisions based on fear. ― Chris Evans

37. The comic book world is so dangerous, you know what I mean? You say one thing and people – they’re ravenous – they are very opinionated fans. But they’re great fans. ― Chris Evans

38. All my good movies, nobody sees. ― Chris Evans

39. What if I couldn’t handle people’s opinions of me? I know that shouldn’t dictate a person’s degree of peace or happiness in life, but the problem is, I chose a business saturated in judgment. ― Chris Evans

40. I can’t believe I was almost too chicken to play Captain America. ― Chris Evans 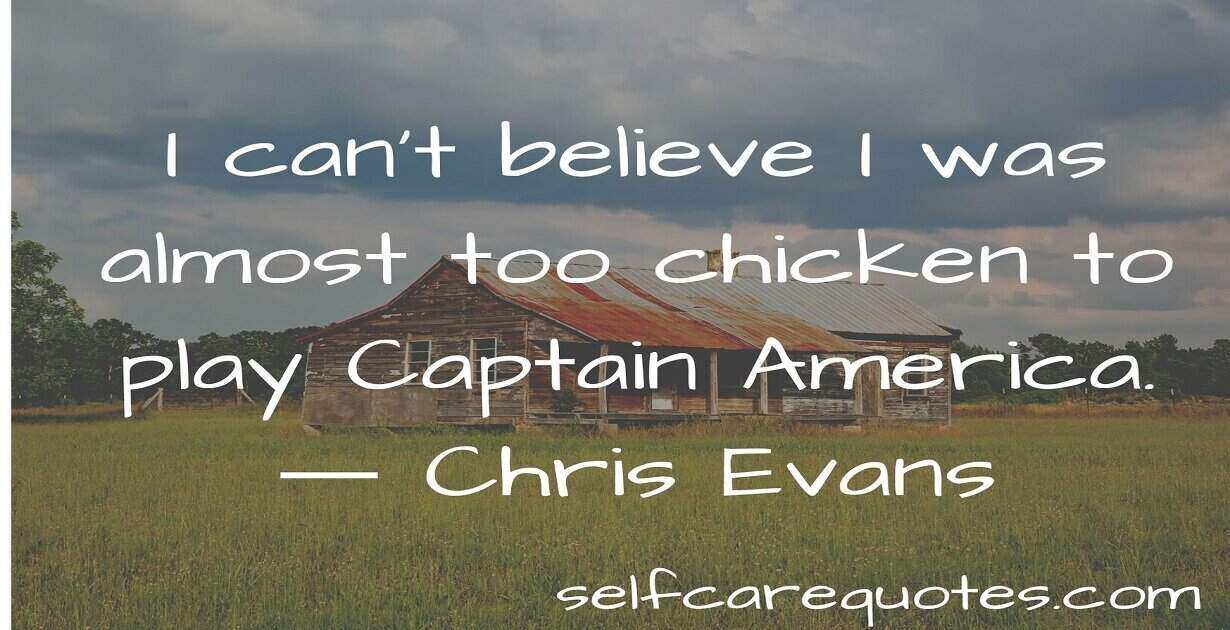 41. I wish you could see some of the girls I have genuinely had crushes on in my life. They’re not the girls you would assume. ― Chris Evans

42. Dressing a baby is like putting an octopus into a string bag, making sure none of the arms hang out. ― Chris Evans

44. Every guy I know has some sort of freak injury in their body. ― Chris Evans

45. Look at pictures of me growing up. It wasn’t always the way it is now. It was a bumpy road for me. ― Chris Evans

46. If your goal is to be the biggest movie star in the world, a 10-movie contract is gold. It was never my goal. ― Chris Evans

47. I’m not that great with press sometimes. ― Chris Evans

48. I’m not that great with press sometimes. ― Chris Evans

49. I am sure every movie I’ve made, even as an actor, had multiple test screenings. And I am sure there have been horrible things written about me. But I never have to see them! ― Chris Evans

The birth year of Christopher Robert Evans is 1981. He was born in Boston. His father’s name is Bob, and his mother’s name is Lisa. He possessed both Irish and Italian ancestry. Chris Evans’ mother was also an artistic director. His brother, Scott Evan, was also an actor like him. He also has two sisters.

From his childhood, Chris Evans got the environment to be an actor. He joined the acting camp. Evans took part in Bye Bye Birdie.  In the Christmas programs, he used to perform in front of his family members and his relatives. He recalled his childhood performance experience with the words “felt like home.”

Chris Evans increased his acting knowledge from an acting school in New York. He attended the ‘Lee Strasberg Theatre and Film Institute.’ He studied in this school before joining his senior year in high school. He studied at ‘Lincoln-Sudbury Regional High School.’

Chris Evans started his career in 1997. We find his first performance in an educational film. In the beginning stage of his career, we also get him as a model. Later he shifted to Los Angeles. In 2000, he appeared in the television film, The Newcomers for the first time.

Evans first played the lead role in the TV series called The Opposite Sex. We also saw him in The Fugitive. The name of some of his works Not Another Teen Movie, The Perfect Score, Cellular, Fierce People, London, Sunshine, Street Kings, The Losers, Scott Pilgrim vs. the World, What’s Your Number?, The Avengers and so on.

If we decide our life’s aim in the early phase of our life, the possibility of our success increases. Then we can give our focus to our destination. It helps us to avoid distraction from the aim of our life. We also find that Evans faced the separation of his parents. Many of us face depression with our familial problems. We should grow the courage to fight with the difficulties of life.