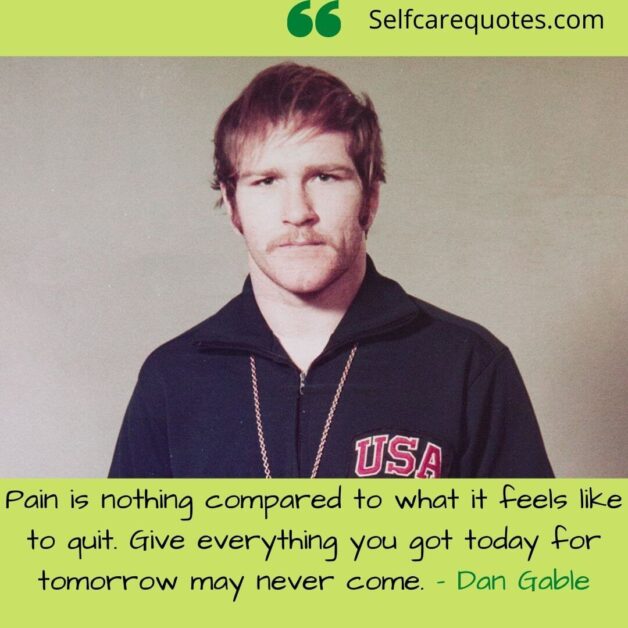 Who was Dan Gable?

Dan Gable is a renowned American wrestler. His full name is Daniel Mack Gable. He became well-known for his ‘folk style’ and ‘freestyle’ wrestling. We may also find him a successful head coach. He made us proud by winning prestigious medals, including ‘world gold medal,’ ‘Olympic gold medal.’ He became successful in his life by dint of his positive attitude and courage.

1. If you are afraid to fail, you will never succeed. – Dan Gable

Pain is nothing compared to what it feels like to quit. Give everything you got today for tomorrow may never come. – Dan Gable

3. I never won anything by myself. I was always strong because of help that gave me extra strength to win. – Dan Gable

6. I’m a big believer in starting with high standards and raising them. We make progress only when we push ourselves to the highest level. If we don’t progress, we backslide into bad habits, laziness and poor attitude. – Dan Gable

7. Gold medals aren’t really made of gold. They’re made of sweat, determination, and a hard-to-find alloy called guts. – Dan Gable

8. Once you’ve wrestled, everything in life is easy. – Dan Gable

10. Raising your level of performance requires a proper mentality and meaning from within. This gives you the ability and drive to work on the things necessary to go to a higher level. When people ask me how to raise their level of performance, the first thing I ask is, How important is it to you? – Dan Gable 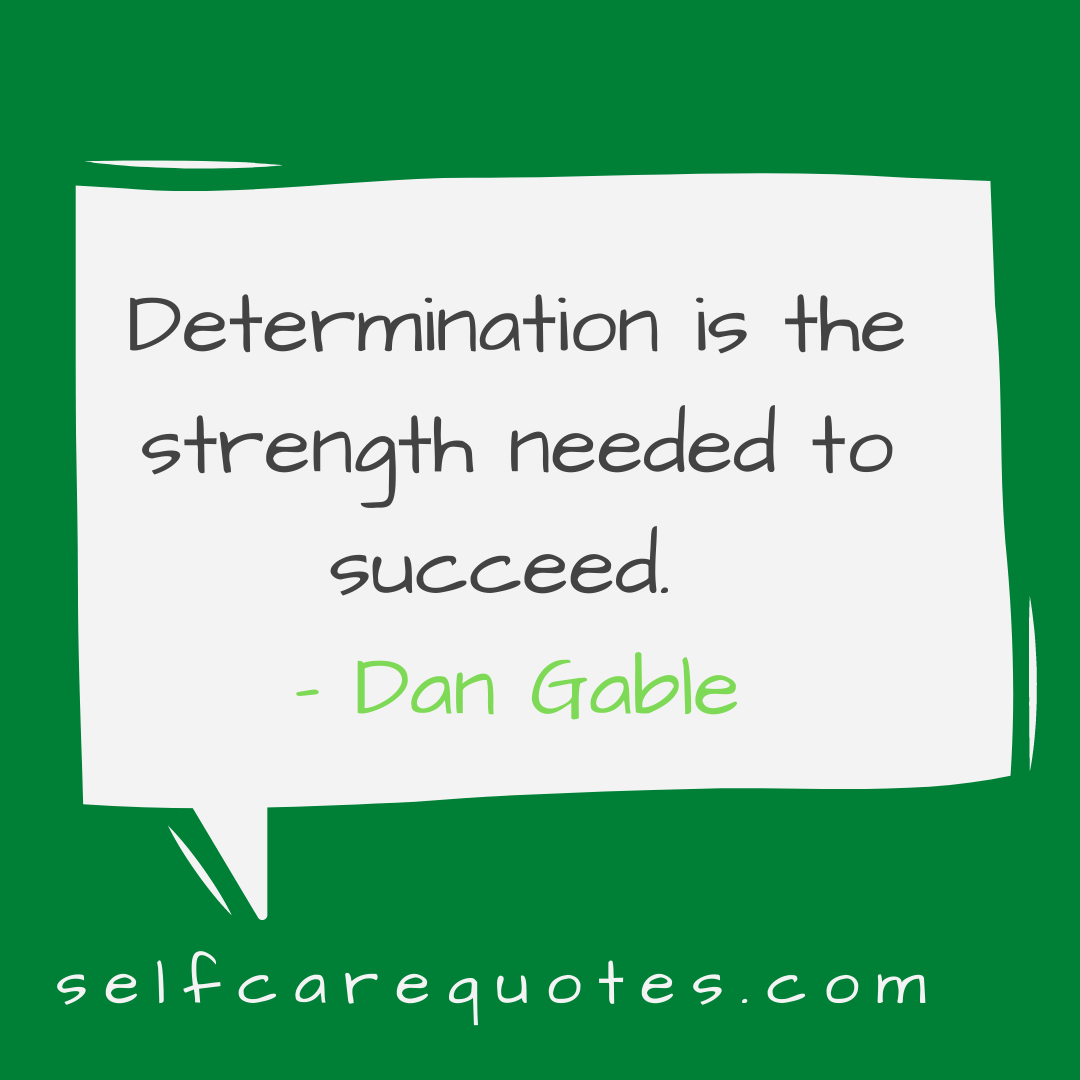 Determination is the strength needed to succeed. – Dan Gable

13. Wrestling… what men do during boys basketball season. – Dan Gable

14. A clean, hard-fought wrestling match is the most honest of athletic contests. There is no technological interventions, no teammates to blame, no panel of judges to bias the score. In wrestling, you compete or you quit. No alibis. I like that – Dan Gable

15. Talent is everywhere, winning attitude is not. – Dan Gable

16. There’s always ways of motivating yourself to higher levels. Write about it, dream about it. But after that, turn it into action. Don’t just dream. – Dan Gable

18. The easiest thing to do in the world is pull the covers up over your head and go back to sleep. – Dan Gable

20. I vowed I wouldn’t ever let anyone destroy me again. I was going to work at it every day, so hard that I would be the toughest guy in the world. By the end of practice, I wanted to be physically tired, to know that I’d been through a workout. If I wasn’t tired, I must have cheated somehow, so I stayed a little longer. – Dan Gable

22. There is no mat space for malcontents or dissenters. One must neither celebrate insanely when he wins, nor sulk when he loses. He accepts victory professionally, humbly; he hates defeat, but makes no poor display of it. – Dan Gable

23. We, as a wrestling community, better remember it is more than one individual that makes a winner. – Dan Gable

24. The obvious goals were there- State Champion, NCAA Champion, Olympic Champion. To get there I had to set an everyday goal which was to push myself to exhaustion or, in other words, to work so hard in practice that someone would have to carry me off the mat. – Dan Gable

25. Freedom across the world is a result of many individuals working together. – Dan Gable 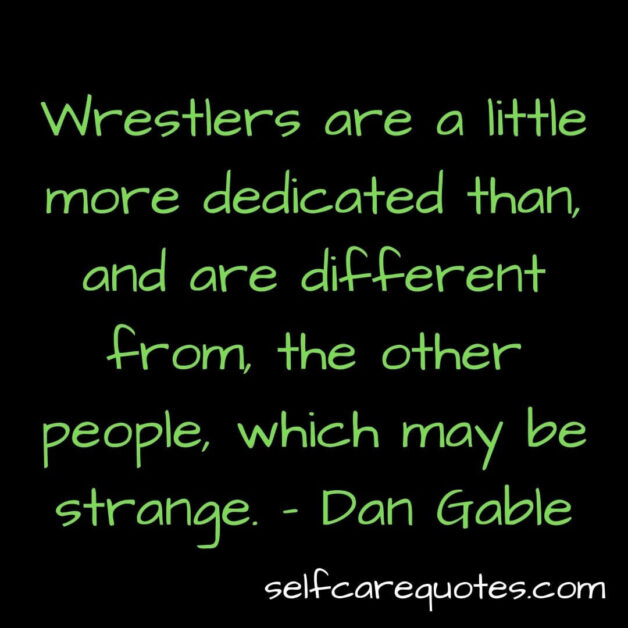 Wrestlers are a little more dedicated than, and are different from, the other people, which may be strange. – Dan Gable

27. A lot of my intensity in wrestling was due to my mental preparation before the matches. I got myself into a different world. – Dan Gable

28. My advice to young wrestlers is that your surroundings really make a difference. You want to put yourself in good, positive surroundings. – Dan Gable

29. If we don’t progress, we backslide into bad habits, laziness and poor attitude. – Dan Gable

30. All I worried about was what Owings was doing to me, instead of what I was doing to him. When you start worrying about that stuff, you’re going down the wrong path. – Dan Gable

31. Wrestling is the only sport I’ve ever competed in that puts you totally in a situation of constant motion without breaks. I could play football or baseball, swim — but there’s always some kind of situation that would break my thoughts, break my concentration. – Dan Gable

32. Wrestling has been a way of life with me day in and day out. I won’t get too far away from it. I might walk through the wrestling room once a week. I could go every day if I wanted. But just walk through, make sure it’s still there. – Dan Gable 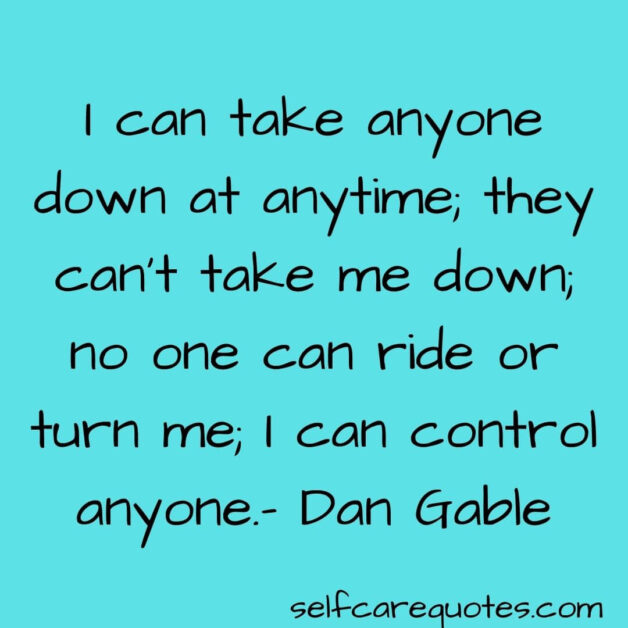 I can take anyone down at anytime; they can’t take me down; no one can ride or turn me; I can control anyone.– Dan Gable

37. My valleys are higher than most people’s peaks. I stay at that level. – Dan Gable

38. My mind’s never gone very far away from what I wanted to accomplish. – Dan Gable

39. I’m delighted to be back in coaching. Our goal is to put Iowa wrestling back on top, and I want to do everything I can to make it happen. – Dan Gable

40. My coaches were great. My mom and dad. My dad never missed a wrestling meet. – Dan Gable 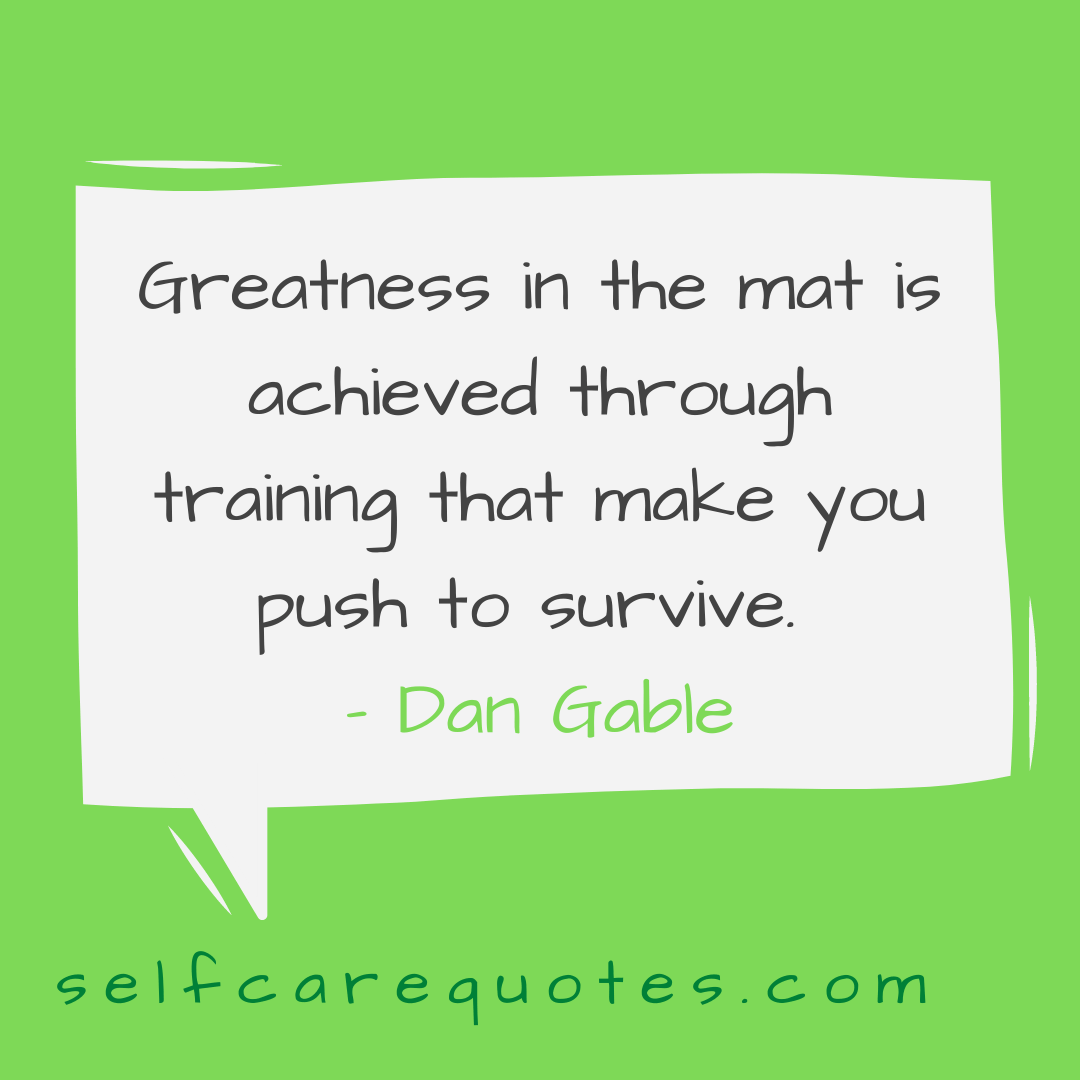 Greatness in the mat is achieved through training that make you push to survive. – Dan Gable

45. Right out of high school I never had the fear of getting beat, which is how most people lose. – Dan Gable

47. But after that, turn it into action. Don’t just dream. – Dan Gable

48. More endearingly than any other sport, wrestling teaches self control and pride. – Dan Gable

49. If you’re going to stay in the Olympics, you’ve got to be entertaining and get sponsorship. – Dan Gable

50. When my wrestlers got their hands raised, I jumped for joy. – Dan Gable

51. My wrestling and family go together. It’s always been that way, from day one with my mom and dad, my sister, my wife, four daughters, grandsons, son-in-laws. – Dan Gable

52. I don’t think college wrestling is in danger of extinction by any means. But I am concerned if one program drops. – Dan Gable

53. The bells are a very good investment. They never break if they are maintained. I can teach the kids the basics. They may play bells for only one year, but many of them go on to play at local churches. – Dan Gable

54. I went to college. I had a double major in biology and physical education, but my major was wrestling. – Dan Gable 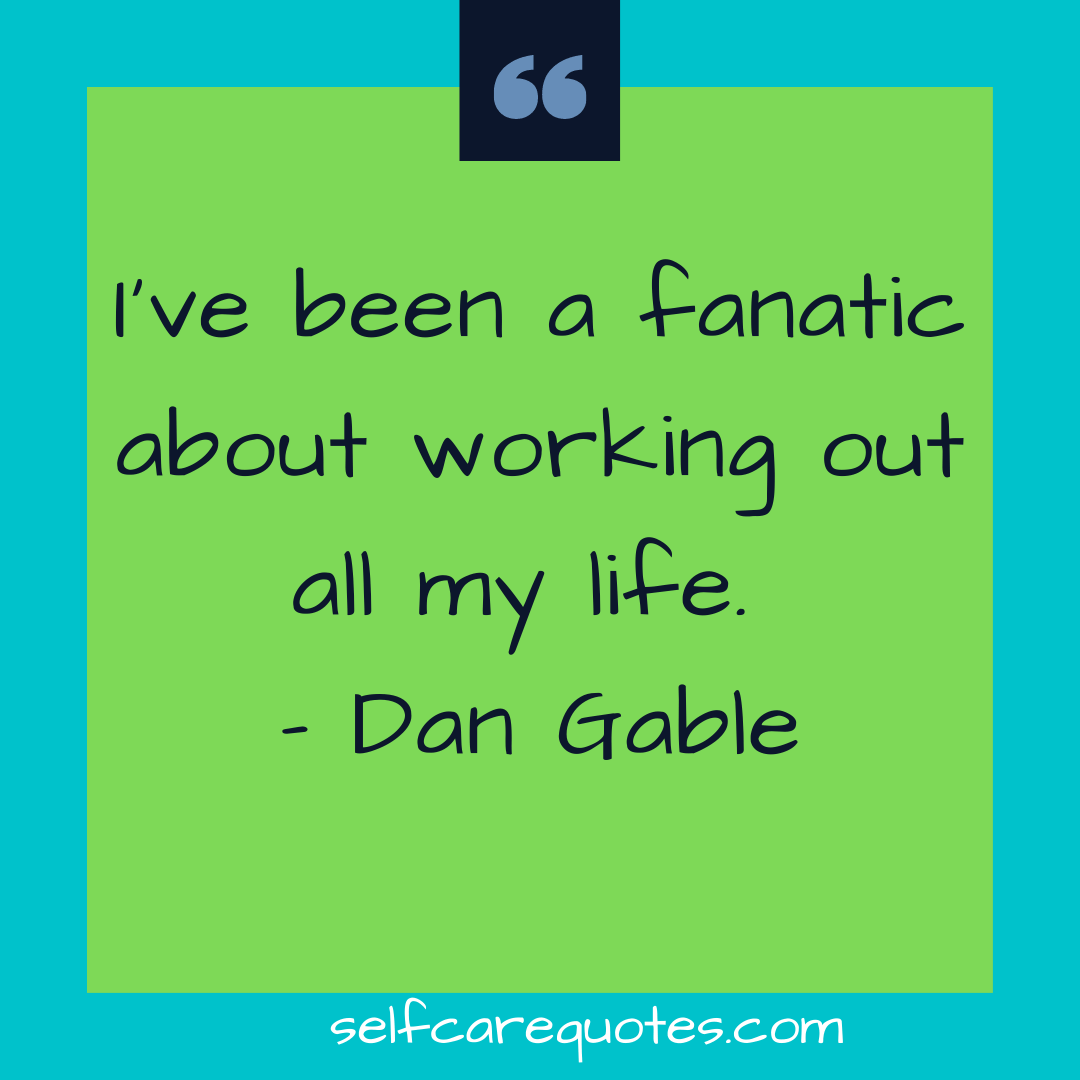 I’ve been a fanatic about working out all my life. – Dan Gable

There is no mat space for malcontents or dissenters. – Dan Gable

You don’t really measure the year until the whole year is done. I’m sure there are some concerned people, including the coaches right now. – Dan Gable

Many of those who have paid the ultimate price for freedom have come through the wrestling ranks. We need to honor them and win this decision to have wrestling – the world’s oldest sport – remain a part of the most prestigious athletic competition in the world, the Olympics. – Dan Gable

Dan Gable spent his early childhood in Waterloo of the United States. His early life was traumatic because of a tragic incident. One day Dan Gable along with his parents went on a trip. When they returned home, they found the dead body of Dan’s elder sister. One of their neighbors raped and brutally killed her.

His sister’s death turned and changed the way of his life. This tragic incident leads him to be a wrestler. He believed that his sister could see him from the sky. He wanted to make his parents and his sister proud.

The tragic event of his life did not distract him from his aim. Rather, it motivates him in his life. He studied at Iowa State University. He became skilled in ‘folkstyle wrestling’ when he was a student of this University. Dan Gable makes us proud by getting the honor of being the NCAA National Champion and the National runner up. In his college career, he had lost only once.

In 1972, we may also notice his success in the Olympic Games. The Cauliflower Alley Club honored him by offering him the ‘Art Abrams Lifetime Achievement Award.’ Dan Gable spent a long time of his career as a wrestling coach at the University of Iowa.

If we go through the biography of Dan Gable, we’ll find him extremely positive towards his life. It is very natural that a person breakdown from the trauma of personal life. In the case of Dan Gable, we can see that his trauma gives him the courage to achieve his goal. The tragic death of his elder sister did not break him down.

After this incident, he has grown courage to be successful in his life and make his family members proud. He did not let the personal loss to overcome the focus of his life.  We should also possess a positive attitude towards our life. We should follow his courageous attitude to overcome the crisis of our life.