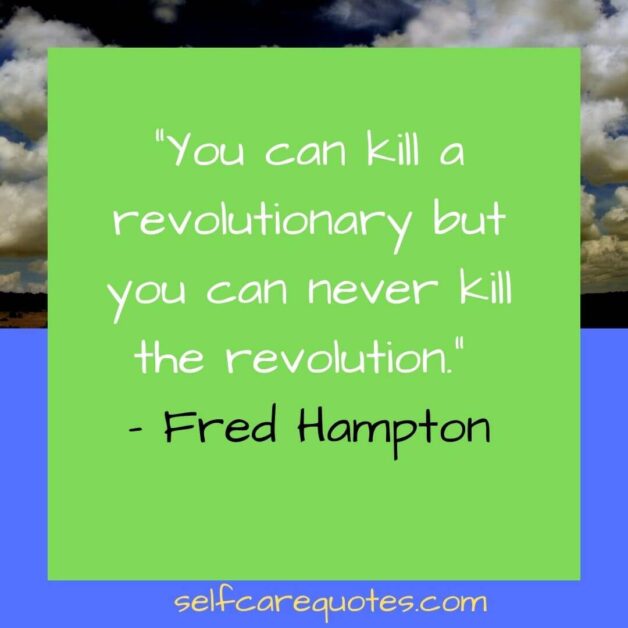 Fred Hampton was a renowned American revolutionary socialist and an activist. His full name is Fredrick Allen Hampton. He was the founder of “Rainbow Coalition.”

He successfully maintained the responsibility of BPP or the national Black Panther Party. BPP is a noteworthy multicultural political organization.

It includes Young Lords, Young Patriots, and the Black Panthers. If we want to learn more about him, we may go through Fred Hampton quotes.

The quotes are representative of Hampton’s love for the people. It explains that to what extend Fred Hampton thought about the different aspects and problems of people.

1. You can kill a revolutionary but you can never kill the revolution. – Fred Hampton

2. People have to be armed to have power, you see. – Fred Hampton

3. You have to understand that people have to pay a price for peace. If you dare to struggle, you dare to win. – Fred Hampton

4. We have Breakfast for Children because we teach the people, through practice, through observation and participation, that people can be there, free. – Fred Hampton

5. I’m not going to die slipping on no ice. – Fred Hampton

7. I was born in a bourgeois community and had some of the better things in life, but I found that there were more people starving than there were people eating, more people that didn’t have clothes than did have clothes, and I just happened to be one of the few. So I decided that I wouldn’t stop doing what I’m doing until all those people are free. – Fred Hampton

10. Let me just say: Peace to you, if you’re willing to fight for it. – Fred Hampton

13. You don’t miss the water ‘til the well runs dry. – Fred Hampton

14. Like we always said, if you’re asked to make a commitment at the age of twenty and you say I don’t want to make that commitment only because of the simple reason that I’m too young to die, I wanna live a little bit longer—what you did is, you’re dead already. – Fred Hampton

17. And how do they fool you? Because they pick the leaders they want. And they put those people up there and portray them as being your leaders when, in fact, they’re leaders of nobody. – Fred Hampton

19. They talked us into buying candy bars and throwing the candy away and eating the wrapper. – Fred Hampton

20. Nothing is more important than stopping fascism, because fascism is gonna stop us all. – Fred Hampton

23. We don’t need no culture except revolutionary culture. What we mean by that is a culture that will free you.– Fred Hampton 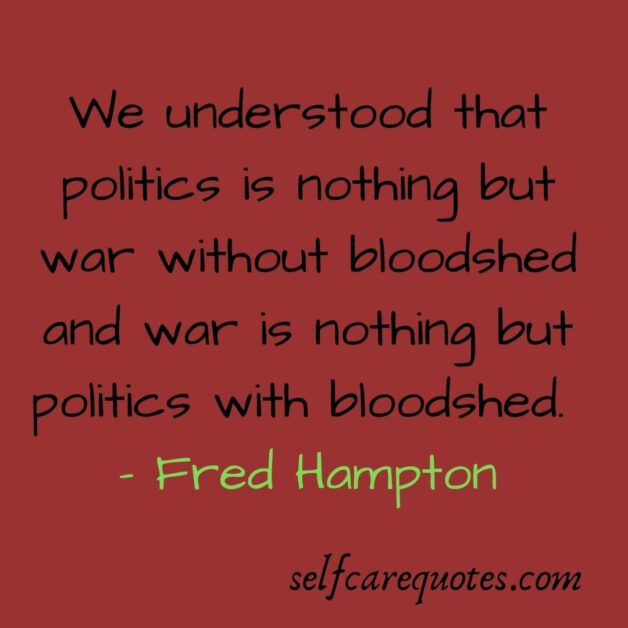 32. If you ever think about me, and you ain’t gonna do no revolutionary act, forget about me. I don’t want myself on your mind if you’re not going to work for the people. – Fred Hampton

34. A lot of people get the word revolution mixed up and they think revolution’s a bad word. Revolution is nothing but like having a sore on your body and then you put something on that sore to cure that infection. – Fred Hampton

35. A lot of people think the Breakfast for Children program is charity. But what does it do? It takes the people from a stage to another stage. Any program that’s revolutionary is an advancing program. Revolution is change. – Fred Hampton

36. You can’t build a revolution with no education. Jomo Kenyatta did this in Africa, and because the people were not educated, he became as much an oppressor as the people he overthrew. – Fred Hampton

37. When you leave here, leave here saying, the last words, before you go to bed tonight, say, “I am a revolutionary.” Make that the last words in case you don’t wake up. Then somebody might believe it and you might, you know, end up in, what they call it, revolutionary happy hunting grounds. – Fred Hampton

38. We say that we will work with anybody and form a coalition with anybody that has revolution on their mind. – Fred Hampton

39. First of all, we say primarily that the priority of this struggle is class. That Marx, and Lenin, and Che Guevara end Mao Tse-Tung and anybody else that has ever said or knew or practiced anything about revolution, always said that revolution is a class struggle. – Fred Hampton

40. Yes, we do defend our office as we do defend our homes. This is a constitutional right everybody has, and nothing’s funny about that. The only reason they get mad at the Black Panther Party when you do it is for the simple reason that we’re political. – Fred Hampton

43. We said nobody would shoot a Panther but a pig, because Panthers don’t pose a threat to anybody but pigs.– Fred Hampton

45. The Black Panther Party stood up and said that we don’t care what anybody says. We don’t think fighting fire with fire is best; we think you fight fire with water best. – Fred Hampton 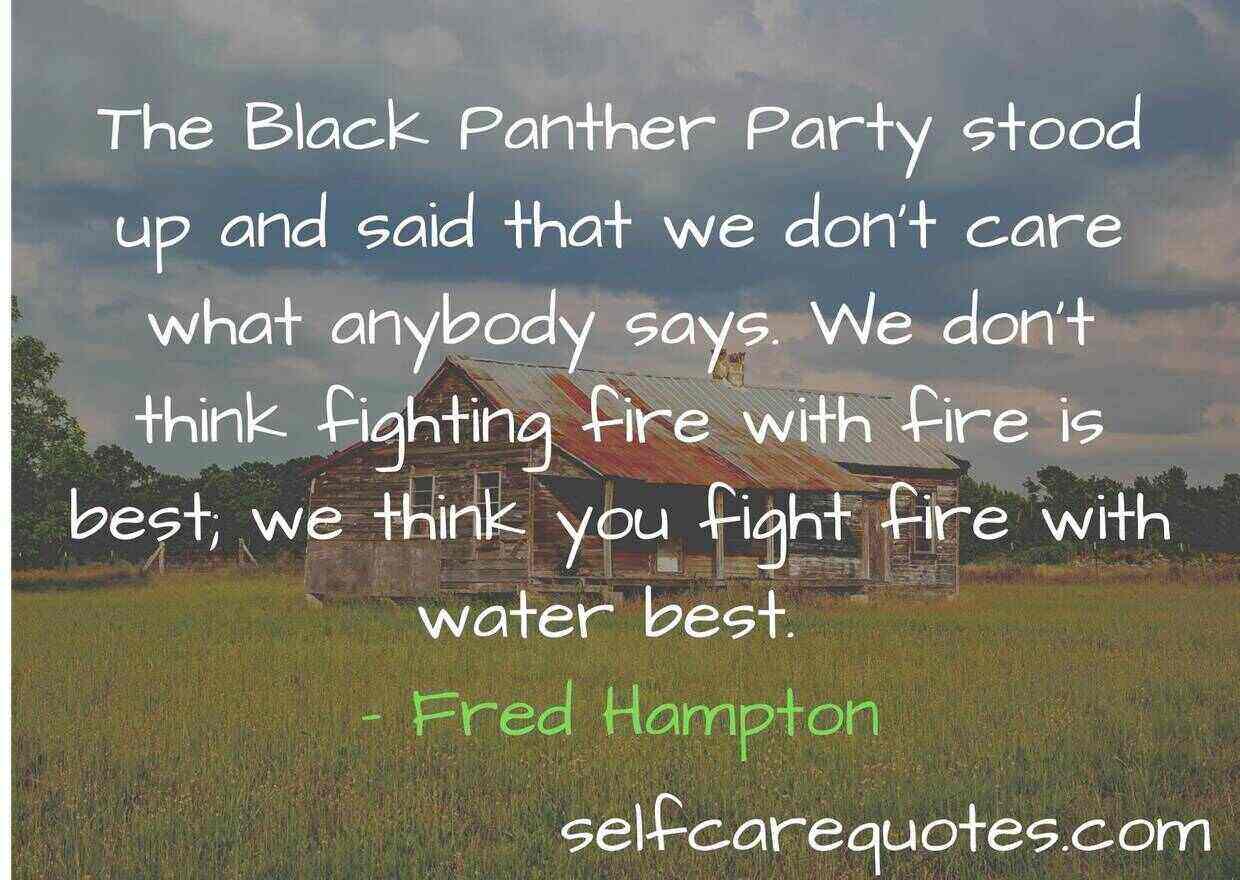 46. We do not support people who are anarchistic, opportunistic, adventuristic, and Custeristic. – Fred Hampton

47. I have a lot of respect for Martin Luther King. I think he was one of the greatest orators that the country ever produced. – Fred Hampton

49. We’re not metaphysicians, we’re not idealists, we’re dialectical materialists. And we deal with what reality is, whether we like it or not. – Fred Hampton

50. Don’t worry about the Black Panther Party. As long as you keep the beat, we’ll keep ongoing. – Fred Hampton 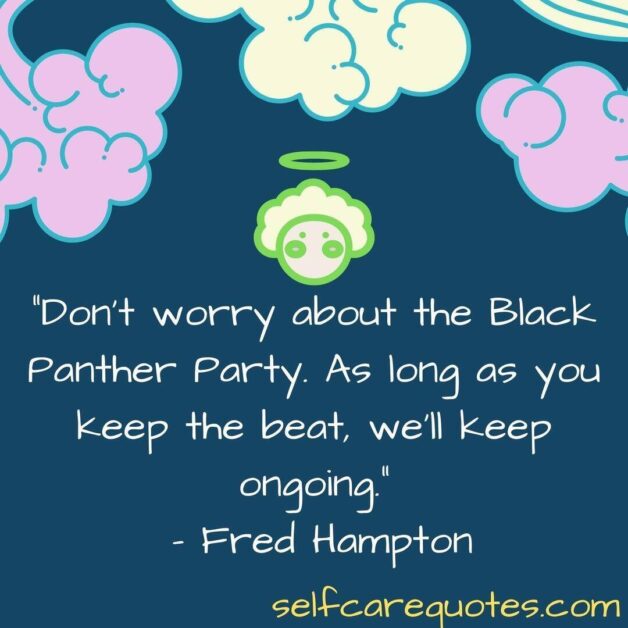 The birth year of Fred Hampton is 1948. He was born in Illinois, Chicago. He spent his early life in Maywood of Chicago. Hampton’s family migrated to Louisiana from North.

His parents worked for the “Agro Search Company.” At an early age, he dreamt of being part of the “New York Yankees” by participating in his play.

Fred Hampton joined the Proviso East High School. He graduated from this school with a brilliant result. He had achieved varsity letters.

In 1966, we may also find him receiving the “Junior Achievement Award.” Later he joined the college named Triton Junior College. He had studied “Pre-Law” in this college.

Fred Hampton was an active worker of the NAACP. He worked as the leader of a group of around 500 people.  He had the wish to change the conditions of society through nonviolent activities.

Later he was attracted to the BPP or the Black Panther Party and joined it. He worked in stopping the racial and ethnic clashes.

He started the “rainbow coalition” to raise the voice against corruption, police oppression, poverty, etc. He worked for the betterment of the people till his death. In 1969, he was killed.

Fred Hampton is a person who is worthy of being followed. He died when he was only twenty-one years old. Fred Hampton’s philosophy and perspectives of life overwhelmed us and motivated to be an actual human being.

If we look over the Fred Hampton quotes, we’ll find what he thought about life. He said, if we don’t help anybody in our life, then we cannot claim our life a worthy one.

From the quotes, we’ll come to know that Fred Hampton was firmly against racism. He also talked about black capitalism. Fred Hampton also motivated us to fight against all the obstacles of our life.

According to him, if we don’t get the courage to fight, then ultimately, we’ll never win. He was also a supporter of the revolution.  Hampton said that nobody could stop the revolution.

He marked fascism as a significant problem for us. Fred Hampton thought that fascism has the power to stop our progress. So he suggested the people for stopping fascism before it destroys us all.

Hamptons thinking and perspective are well advanced. He always felt for the betterment of the people. We should follow his suggestions. We should help the people around us, and we should also think about people’s improvement.