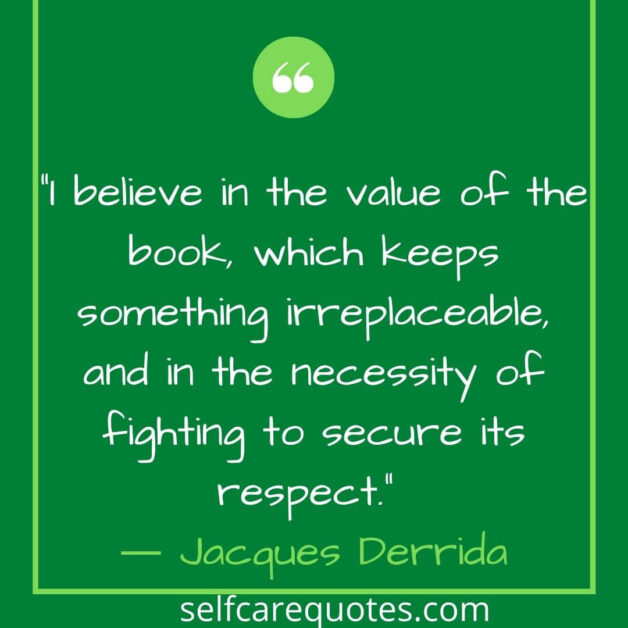 Jacques Derrida was a philosopher of postmodern age. He was a person who has contributed to many sections of learning. If I give you a list of his works on different branches of knowledge you will be astonished. He worked for humanities, social sciences, literature, law, psychoanalysis, applied linguistics and so on. Though his birthplace is Algeria, he is famous all over Europe and America. He is mostly called by his name Jacques Derrida but his full name is Jackie Élie Derrida. As he was a philosopher, he left a huge number of mind blowing quotes before his death. Though he passed away, Jacques Derrida quotes are still appealing.

1. I believe in the value of the book, which keeps something irreplaceable, and in the necessity of fighting to secure its respect. ― Jacques Derrida

2. I was wondering myself where I am going. So I would answer you by saying, first, that I am trying, precisely, to put myself at a point so that I do not know any longer where I am going.― Jacques Derrida

3. I am one of those marranes who no longer say they are Jews even in the secret of their own hearts.― Jacques Derrida

4. What cannot be said above all must not be silenced but written.― Jacques Derrida

5. If I only did what I can do, I wouldn’t do anything― Jacques Derrida

6. Learning to live ought to mean learning to die – to acknowledge, to accept, an absolute mortality – without positive outcome,or resurrection, or redemption, for oneself or for anyone else. That has been the old philosophical injunction since Plato: to be a philosopher is to learn how to die.― Jacques Derrida

7. The blindness that opens the eye is not the one that darkens vision. Tears and not sight are the essence of the eye.― Jacques Derrida

8. I never give in to the temptation to be difficult just for the sake of being difficult. That would be too ridiculous.― Jacques Derrida

9. If things were simple, word would have gotten around.― Jacques Derrida

10. That is what deconstruction is made of: not the mixture but the tension between memory, fidelity, the preservation of something that has been given to us, and, at the same time, heterogeneity, something absolutely new, and a break.― Jacques Derrida

11. One often speaks without seeing, without knowing, without meaning what one says.― Jacques Derrida

12. There is nothing outside the text― Jacques Derrida

13. Monsters cannot be announced. One cannot say: ‘Here are our monsters,’ without immediately turning the monsters into pets.― Jacques Derrida

15. I always dream of a pen that would be a syringe.― Jacques Derrida

16. Différance is the systematic play of differences, of the traces of differences, of the spacing by means of which elements are related to each other. This spacing is the simultaneously active and passive (the a of différance indicates this indecision as concerns activity and passivity, that which cannot be governed by or distributed between the terms of this opposition) production of the intervals without which the “full” terms would not signify, would not function.― Jacques Derrida

17. The poet…is the man of metaphor: while the philosopher is interested only in the truth of meaning, beyond even signs and names, and the sophist manipulates empty signs…the poet plays on the multiplicity of signifieds.― Jacques Derrida

18. To pretend, I actually do the thing: I have therefore only pretended to pretend.― Jacques Derrida

19. I wrote some bad poetry that I published in North African journals, but even as I withdrew into this reading, I also led the life of a kind of young hooligan.― Jacques Derrida

20. Within the university… you can study without waiting for any efficient or immediate result. You may search, just for the sake of searching, and try for the sake of trying. So there is a possibility of what I would call playing. It’s perhaps the only place within society where play is possible to such an extent.― Jacques Derrida

21. There is no rigorous and effective deconstruction without the faithful memory of philosophies and literatures, without the respectful and competent reading of texts of the past, as well as singular works of our own time. Deconstruction is also a certain thinking about tradition and context. Mark Taylor evokes this with great clarity in the course of a remarkable introduction. He reconstitutes a set of premises without which no deconstruction could have seen the light of day.― Jacques Derrida

22. I became the stage for the great argument between Nietzsche and Rousseau. I was the extra ready to take on all the roles.― Jacques Derrida

23. Peace is only possible when one of the warring sides takes the first step, the hazardous initiative, the risk of opening up dialogue, and decides to make the gesture that will lead not only to an armistice but to peace.― Jacques Derrida

24. Each time this identity announces itself, someone or something cries: Look out for the trap, youre caught. Take off, get free, disengage yourself.― Jacques Derrida

25. The end approaches, but the apocalypse is long lived.― Jacques Derrida

26. If you read philosophical texts of the tradition, you’ll notice they almost never said ‘I,’ and didn’t speak in the first person. From Aristotle to Heidegger, they try to consider their own lives as something marginal or accidental. What was essential was their teaching and their thinking. Biography is something empirical and outside, and is considered an accident that isn’t necessarily or essentially linked to the philosophical activity or system.― Jacques Derrida

27. The trace I leave to me means at once my death, to come or already come, and the hope that it will survive me. It is not an ambition of immortality; it is fundamental. I leave here a bit of paper, I leave, I die; it is impossible to exit this structure; it is the unchanging form of my life. Every time I let something go, I live my death in writing.― Jacques Derrida

28. It is to have a compulsive, repetitive, and nostalgic desire for the archive, an irrepressible desire to return to the origin, a homesickness, a nostalgia for the return to the most archaic place of absolute commencement.― Jacques Derrida

29. What is called “objectivity,” scientific for instance (in which I firmly believe, in a given situation) imposes itself only within a context which is extremely vast, old, firmly established, or rooted in a network of conventions … and yet which still remains a context.― Jacques Derrida

31. As soon as there is language, generality has entered the scene.― Jacques Derrida

33. Such a caring for death, an awakening that keeps vigil over death, a conscience that looks death in the face, is another name for freedom.― Jacques Derrida

34. The traditional statement about language is that it is in itself living, and that writing is the dead part of language.― Jacques Derrida

35. Who ever said that one was born just once?― Jacques Derrida

36. Everything is arranged so that it be this way, this is what is called culture.― Jacques Derrida

37. I never give in to the temptation to be difficult just for the sake of being difficult. That would be too ridiculous.― Jacques Derrida

38. The only attitude (the only politics–judicial, medical, pedagogical and so forth) I would absolutely condemn is one which, directly or indirectly, cuts off the possibility of an essentially interminable questioning, that is, an effective and thus transforming questioning.― Jacques Derrida

39. Even if we’re in a state of hopelessness, a sense of expectation is an integral part of our relationship to time. Hopelessness is possible only because we do hope that some good, loving someone could come. If that’s what Heidegger meant, then I agree with him.― Jacques Derrida

40. Surviving – that is the other name of a mourning whose possibility is never to be awaited.― Jacques Derrida

41. Whatever precautions you take so the photograph will look like this or that, there comes a moment when the photograph surprises you. It is the other’s gaze that wins out and decides.― Jacques Derrida

43. Actually, when I write, there is a feeling of necessity, of something that is stronger than myself that demands that I must write as I write.― Jacques Derrida

44. Deconstruction never had meaning or interest, at least in my eyes, than as a radicalization, that is to say, also within the tradition of a certain Marxism, in a certain spirit of Marxism.― Jacques Derrida

45. A determination or an effect within a system which is no longer that of a presence but of a diffrance, a system that no longer tolerates the opposition of activity and passivity, nor that of cause and effect, or of indetermination and determination, etc., such that in designating consciousness as an effect or a determination, one continues – for strategic reasons that can be more or less lucidly deliberated and systematically calculated – to operate according to the lexicon of that which one is de-limiting.― Jacques Derrida

47. No one gets angry at a mathematician or a physicist whom he or she doesn’t understand, or at someone who speaks a foreign language, but rather at someone who tampers with your own language.― Jacques Derrida

48. In a language, in the system of language, there are only differences. Therefore, a taxonomical operation an undertake the systematic, statistical, and classificatory inventory of a language.― Jacques Derrida

50. I do everything I think possible or acceptable to escape from this trap.― Jacques Derrida

A text is not a text unless it hides from the first comer, from the first glance, the law of its composition and the rules of its game. A text remains, moreover, forever imperceptible. Its laws and rules are not, however, harbored in the inaccessibility of a secret; it is simply that they can never be booked, in the present, into anything that could rigorously be called perception.― Jacques Derrida

Jacques Derrida got his education in the tradition of France but his elementary and secondary education was in the city of El Bira. He learned philosophy from the elite École Normally Supérieure of France. But when he was gaining his elementary education, the French colonial government in Algeria removed the quota for Jewish children. For this reason, he was thrown out from the school. But he did not attend the specialized school for Jewish people rather he escaped from schooling.

Whenever it comes to the career of Jacques Derrida, it is really hard to identify a specialized career for him. He is at a time a writer, thinker, lecturer and many other things. He wrote almost forty books; all those books actually reveal his thoughts on the different branches of knowledge. He also provided lectures in different universities. His contribution as a philosopher is not confined in any single section. Jacques Derrida is at a time a social thinker and a language specialist. So, if we want to talk about his career, we have to talk about his whole life.

Jacques Derrida left many things for us to follow. First of all we can follow his teachings. He brings a lot of different ideas and philosophies. These ideas should be followed by us. Jacques Derrida’s contributions in many fields are really amazing. Those theories solved many problems of human life. We can follow his quotes too. Some of the quotes produced by Jacques Derrida are evergreen and universal. These can be followed by any type of people from any part of the world. So, we must not avoid those things.