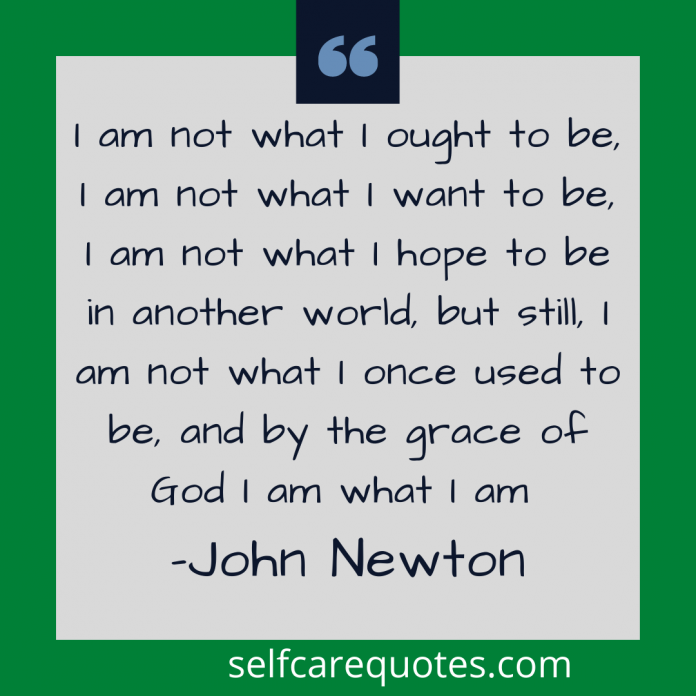 John Newton is a famous British Anglican clergyman. We also know him as an abolitionist and a sailor. He was a strong supporter of abolitionism until his death. Though he is known as a sailor of the Royal Navy, it was not by his choice. He was forced to be a sailor. We see the presence of diversity in the life of John Newton. He worked both as a slave and a prominent priest. John Newton also showed his excellence in writing. He is the author of some popular hymns. If we go through the John Newton quotes, we may observe his uniqueness and individual writing style. 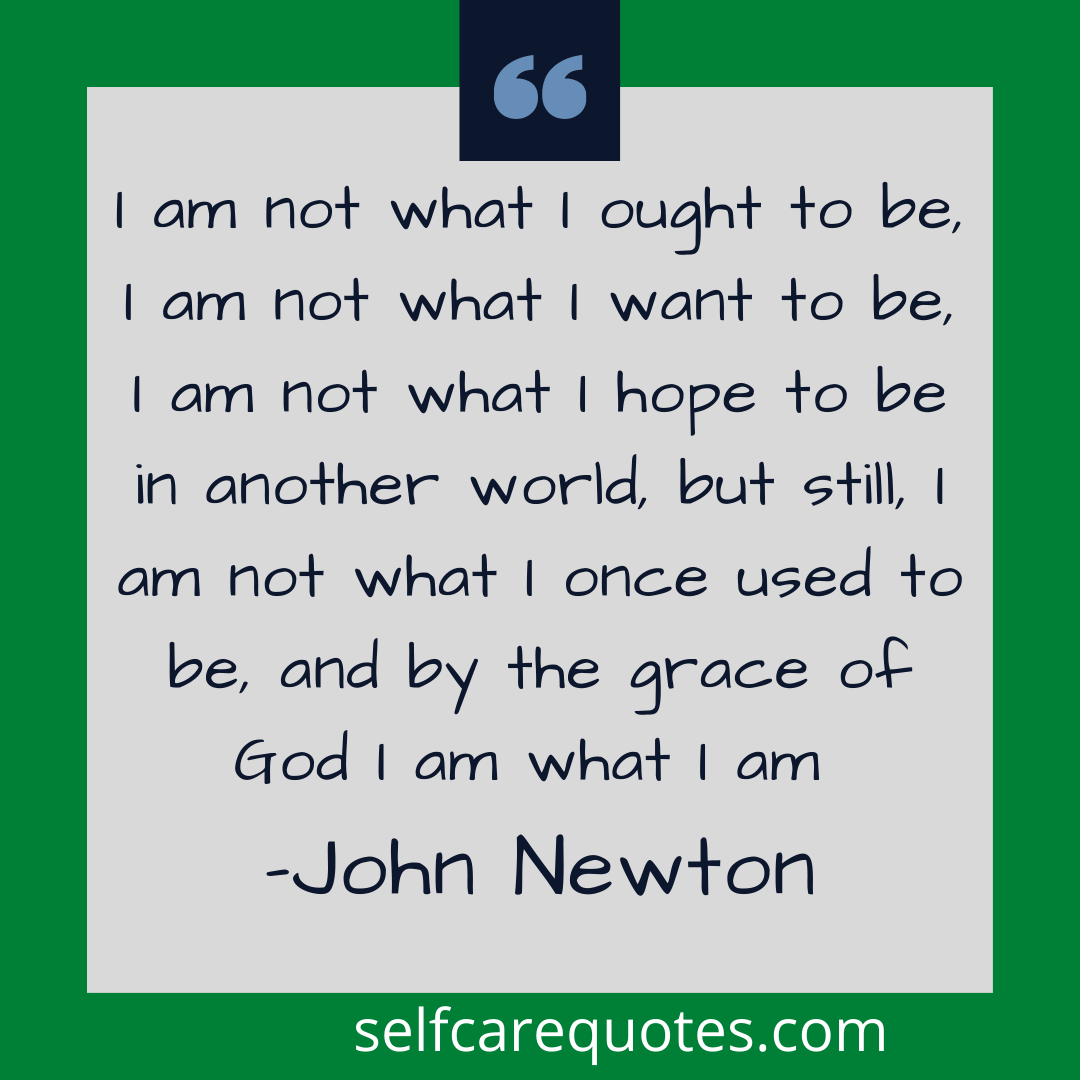 2.Although my memory’s fading, I remember two things very clearly: I am a great sinner and Christ is a great Savior. -John Newton

3. When I was young, I was sure of many things; now there are only two things of which I am sure: one is, that I am a miserable sinner; and the other, that Christ is an all-sufficient Saviour. He is well-taught who learns these two lessons. -John Newton

4. If the Lord be with us, we have no cause of fear. His eye is upon us, His arm over us, His ear open to our prayer – His grace sufficient, His promise unchangeable. -John Newton

7. Christ has taken our nature into Heaven to represent us; and has left us on earth, with His nature, to represent Him.-John Newton

8. Whoever is truly humbled — will not be easily angry, nor harsh or critical of others. He will be compassionate and tender to the infirmities of his fellow-sinners, knowing that if there is a difference — it is grace alone which has made it! He knows that he has the seeds of every evil in his own heart. And under all trials and afflictions — he will look to the hand of the Lord, and lay his mouth in the dust, acknowledging that he suffers much less than his iniquities have deserved. -John Newton

9. Our work is great; our time is short; the consequences of our labors are infinite. -John Newton 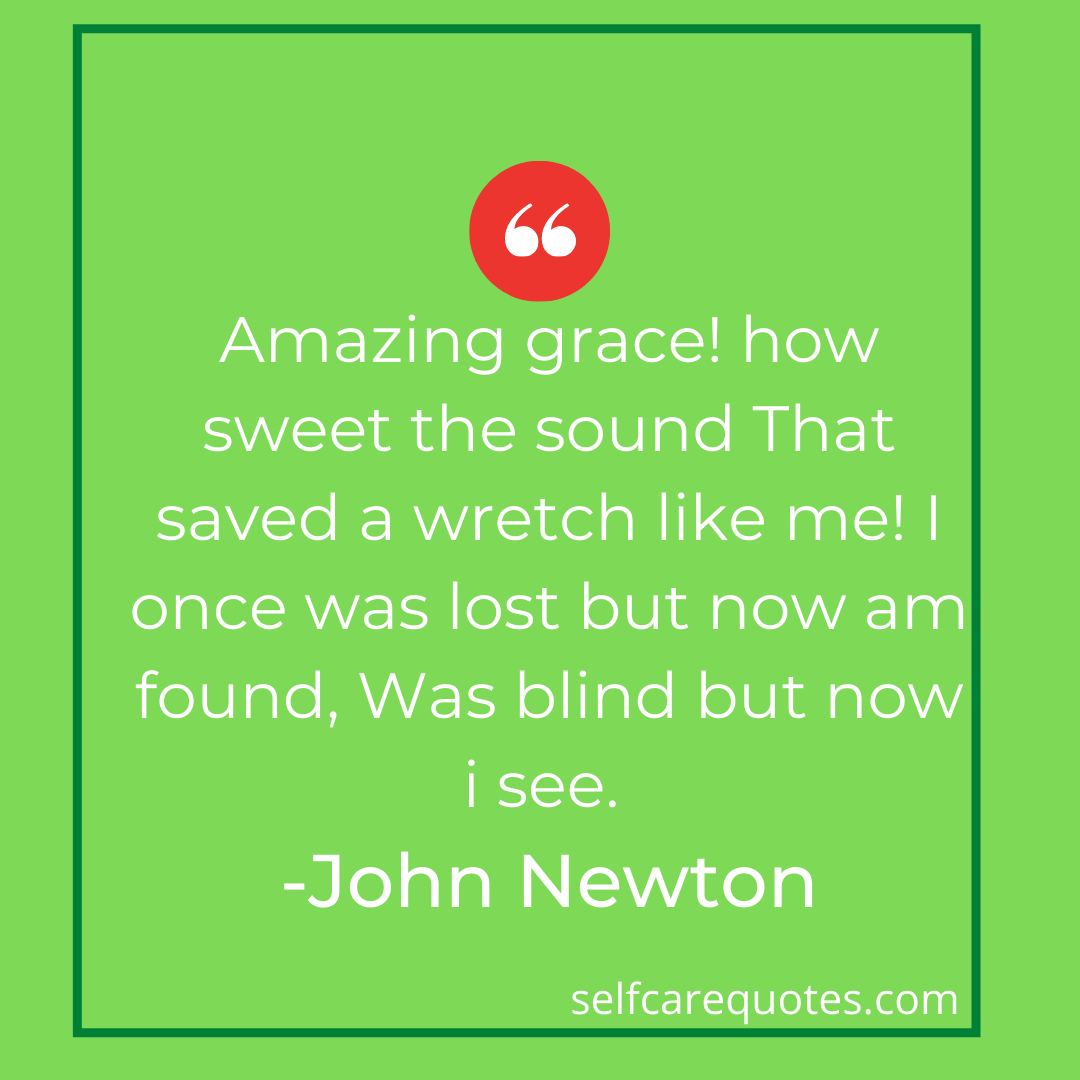 Amazing grace! how sweet the sound That saved a wretch like me! I once was lost but now am found, Was blind but now i see. -John Newton

11. The best advice I can give you: Look unto Jesus, beholding his beauty in the written word. -John Newton

12. We can easily manage if we will only take, each day, the burden appointed to it. But the load will be too heavy for us if we carry yesterday’s burden over again today, and then add the burden of the morrow before we are required to bear it. -John Newton

13. Whether men are pleased or not, we will, we must, worship the Lamb that was slain. -John Newton

14. Though troubles assail And dangers affright, Though friends should all fail And foes all unite; Yet one thing secures us, Whatever betide, The scripture assures us, The Lord will provide.-John Newton

15. How sweet the name of Jesus sounds In a believer’s ear! It soothes his sorrows, heals his wounds, And drives away his fear. -John Newton

16. I am persuaded that love and humility are the highest attainments in the school of Christ and the brightest evidences that He is indeed our Master. -John Newton

17. A real friendship should not fade as time passes, and should not weaken because of space separation.-John Newton

18. God often takes a course for accomplishing His purposes directly contrary to what our narrow views would prescribe. He brings a death upon our feelings, wishes, and prospects when He is about to give us the desire of our hearts.-John Newton

19. I make it a rule of Christian duty never to go to a place where there is not room for my Master as well as myself.-John Newton 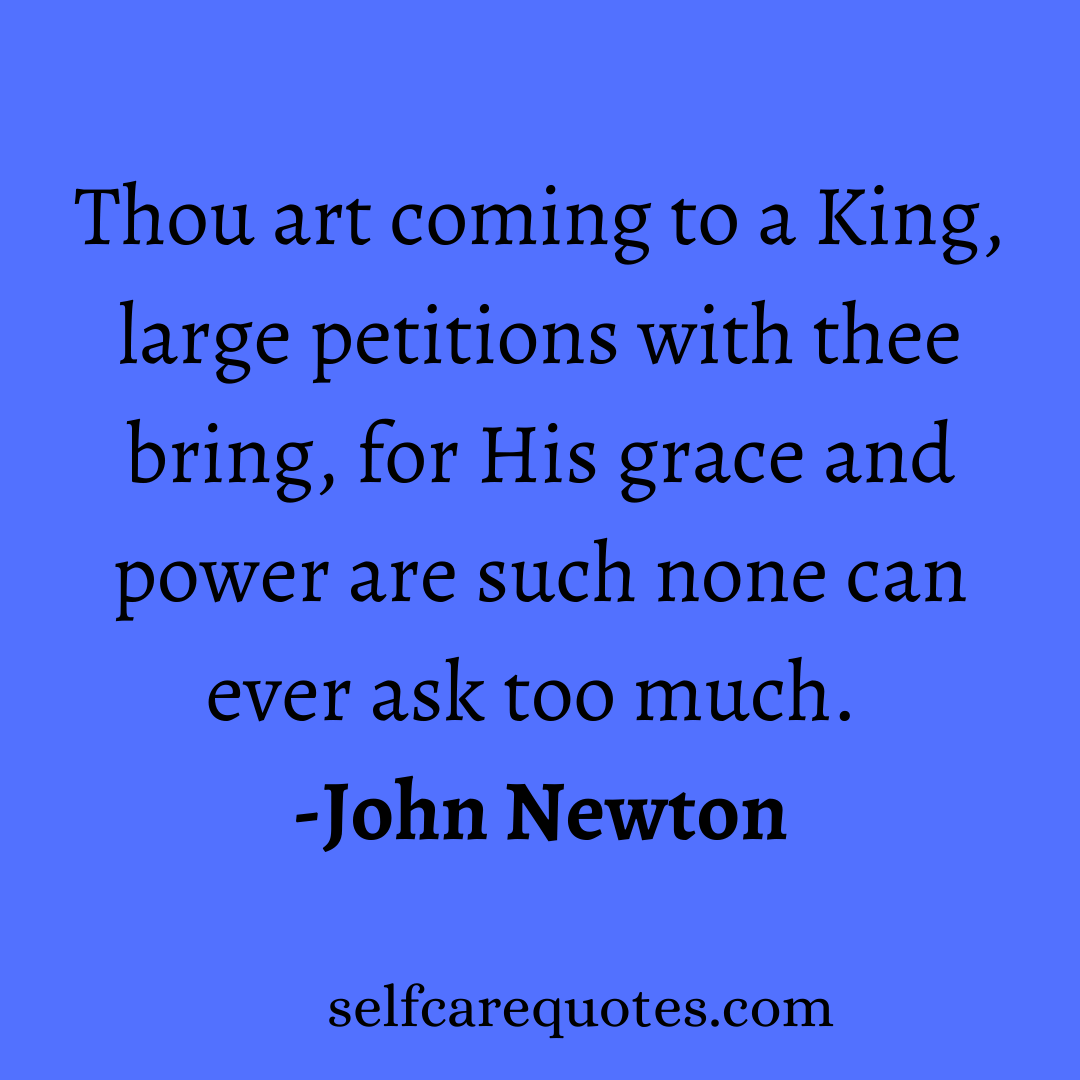 Thou art coming to a King, large petitions with thee bring, for His grace and power are such none can ever ask too much. -John Newton

22.This is faith: a renouncing of everything we are apt to call our own and relying wholly upon the blood, righteousness and intercession of Jesus. -John Newton

23. We serve a gracious Master who knows how to overrule even our mistakes to his glory and our own advantage. -John Newton

24. Through many dangers, toils and snares, I have already come; ‘Tis grace has brought me safe thus far, And grace will lead me home. -John Newton

25. Faith upholds a Christian under all trials, by assuring him that every painful dispensation is under the direction of his Lord. -John Newton

26. How many times has He delivered me! Yet, alas! How distrustful and ungrateful is my heart even until the present! -John Newton

27. God works powerfully, but for the most part gently and gradually. -John Newton

28. What will it profit a man if he gains his cause and silences his adversary if at the same time he loses that humble, tender frame of spirit in which the Lord delights, and to which the promise of his presence is made?-John Newton

29. Time, by moments, steals away, First the hour, and then the day; Small the daily loss appears, Yet it soon amounts to years -John Newton 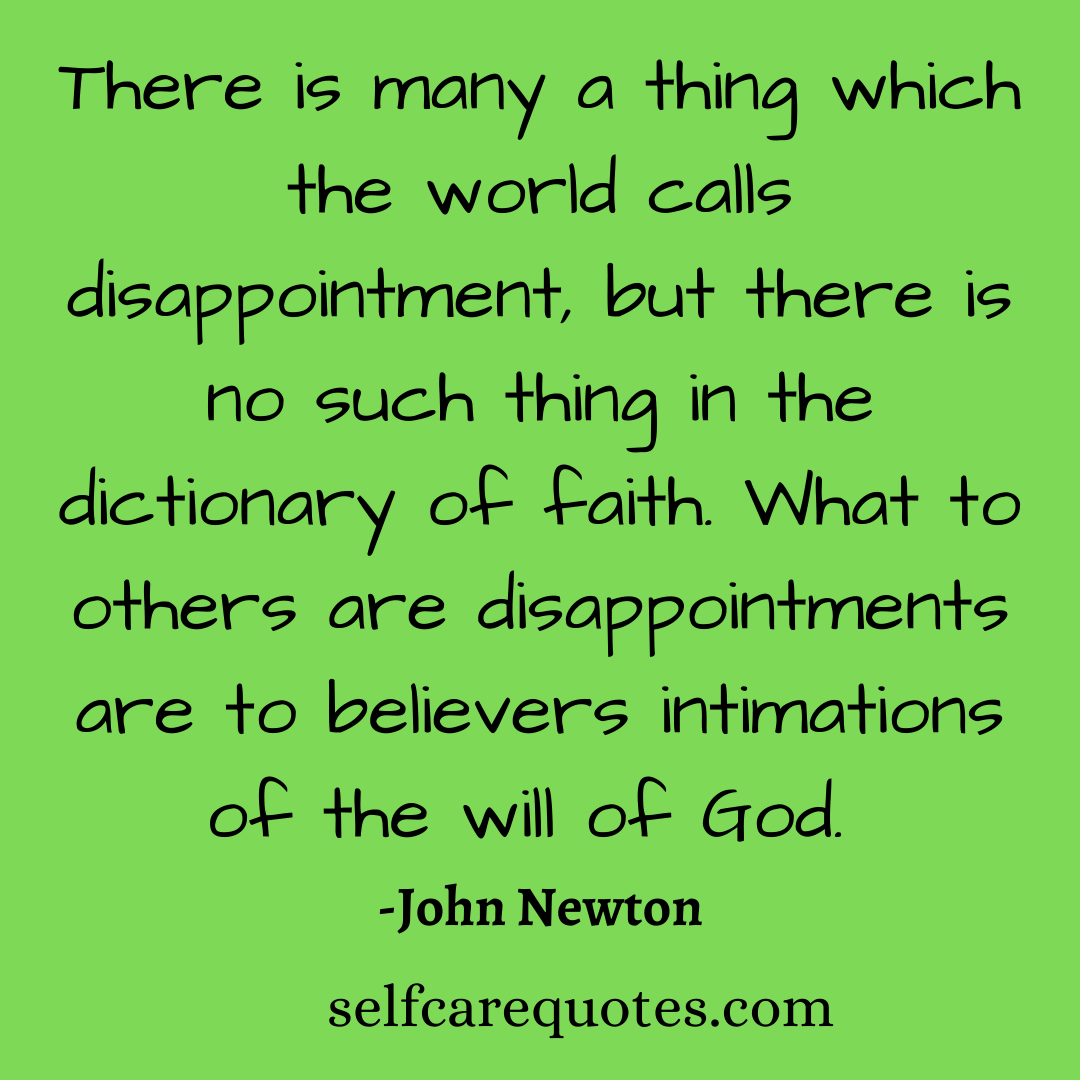 There is many a thing which the world calls disappointment, but there is no such thing in the dictionary of faith. What to others are disappointments are to believers intimations of the will of God. -John Newton

31. How Sweet the name of Jesus… the rock on which I build, my shield and hiding place, my never failing treasury, filled with boundless stores of grace. -John Newton

32. If our zeal is embittered by expressions of anger, invective, or scorn—we may think we are doing service of the cause of truth when in reality we shall only bring it into discredit! –John Newton

33. My grand point in preaching is to break the hard heart, and to heal the broken one. -John Newton

34. God sometimes does His work with gentle drizzle, not storms. -John Newton

36. Let me endeavor to lead you out of yourself: let me invite you to look unto Jesus. -John Newton

37. Not only the guilt, but the love of sin, and its dominion, are taken away, subdued by grace, and cordially renounced by the believing pardoned sinner.-John Newton

38. Every drop of rain hits its appointed target.-John Newton

39. Zeal without knowledge is like expedition to a man in the dark. -John Newton 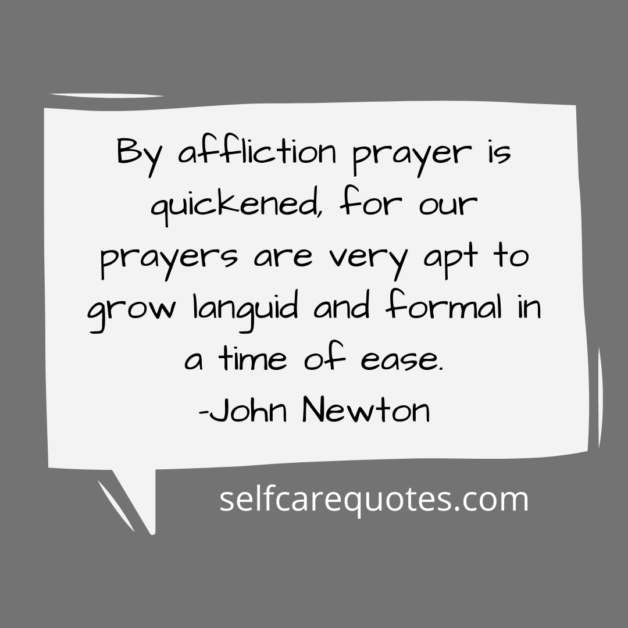 By affliction prayer is quickened, for our prayers are very apt to grow languid and formal in a time of ease.-John Newton

41. I am a great Sinner and God is a great Savior -John Newton

42. By one hour’s intimate access to the throne of grace, where the Lord causes His glory to pass before the soul that seeks Him you may acquire more true spiritual knowledge and comfort than a day’s or a week’s converse with the best of men, or the most. -John Newton

43. If we venture beyond the pale of Scripture, we are…exposed to all the illusions of imagination and enthusiasm. -John Newton

44. Experience is the Lord’s school, and they who are taught by Him usually learn by the mistakes they make that in themselves they have no wisdom; and by their slips and falls, that they have no strength.-John Newton

46. A minister full of comforts & free from failings as an angel, though he would be happy, wouldn’t be a good or useful preacher-John Newton

47. If it were possible for me to alter any part of his plan, I could only spoil it.-John Newton

48. I endeavored to renounce society, that I might avoid temptation. But it was a poor religion; so far as it prevailed, only tended to make me gloomy, stupid, unsociable, and useless. -John Newton

49.Of all people who engage in controversy, we, who are called Calvinists, are most expressly bound by our own principles to the exercise of gentleness and moderation. -John Newton 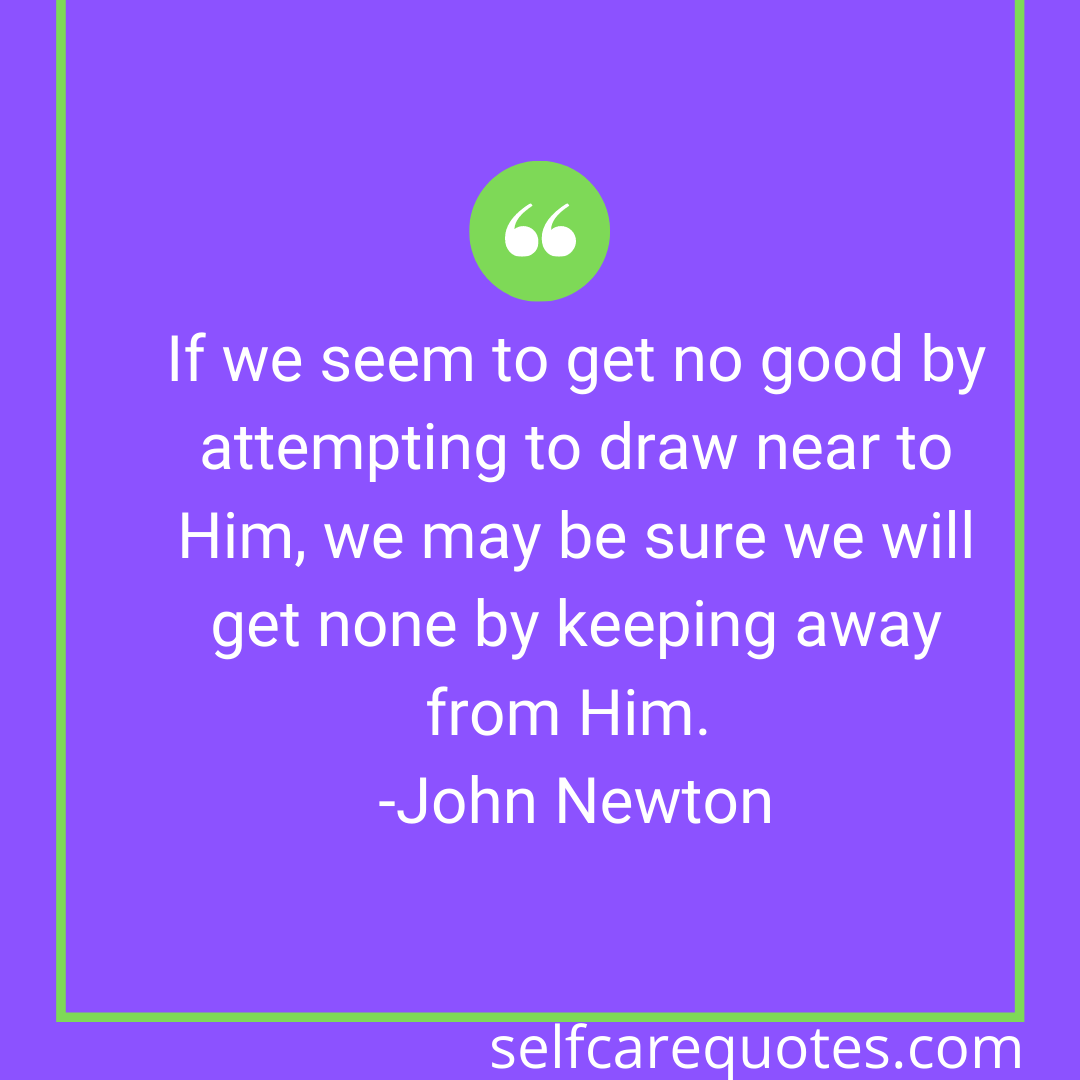 If we seem to get no good by attempting to draw near to Him, we may be sure we will get none by keeping away from Him. -John Newton

When the Royal Navy caught him, his situation was unbearable for him with their acts and punishment. Even Newton thought of committing suicide. However, later he had overcome his depression. In his quote, we may find the optimistic power and attitude towards life. You will realize one fact from the John Newton quote; everything is necessary for us, both good and bad experiences. We should accept all the things positively that is sent by the Almighty.

John Newton was born in 1725 in London. Newton and his father share the same name. Newton’s father’s name is John Newton, the Elder. He worked as a shipmaster. The name of Newton’s mother is Elizabeth. His mother died in his childhood. He was admitted to boarding school but left it within two years. He married his childhood friend and adopted two of his nieces.

We have previously mentioned that Newton’s father’s profession was sea-related. So, during his childhood, he got many opportunities to set for the voyage. However, Newton conducted almost six trips with his father before his retirement. We find his interest in the sea was started in his childhood. Later he signed with a merchant ship to conduct a voyage on the Mediterranean Sea.

Though John Newton had chosen the sea as his companion, his fate did not always support him. In 1743, the Royal Navy captured him and made him bound to work for them. They made him a midshipman. Newton tried to escape from it. As a result, they punished him by reducing his position. Later, they transferred him to a slave ship named ‘Pegasus.’

The ship ‘Pegasus’ left Newton to West Africa. From here, the next chapter of his life began. The crew handed him over, Amos Clowe. Clowe took Newton with him and made him his wife’s slave. His wife’s name was Peye, and she was the princess of ‘Sherbro people.’ The princess used to abuse her slaves. She also used to mistreat with John Newton. His father’s friend rescued him from there.

Newton’s involvement in the slave trade:

Later, we find Newton’s involvement in the slave trade. However, his own bitter experiences made him sympathize with the slaves. If you go through John Newton quotes about slavery, you may know about true feelings for the slave and slavery. Later, we find him as a strong supporter of the abolishment of the slave trade.

The glorious part of life:

In 1748, John Newton went through spiritual conversion. In the same year, he converted to Christianity. Newton was the believer of Evangelical Protestantism. Later, he became the priest of the church. He is renowned for his hymns. John Newton hymns are the representation of his beliefs and his excellence in writing. You may also find his writing excellence in the John Newton epitaph. John Newton had written the epitaph of his tomb.