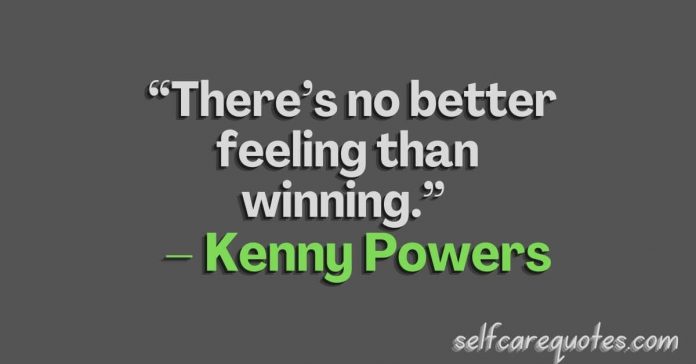 For this reason, this character becomes more popular than any other character in this industry. In “Eastbound & Down”, this man delivers some universal dialogues that are known as Kenny Powers quotes. Let’s see them.

2. “I’m sober and ready to destroy the competitions.” – Kenny Powers

3. “Stay in school. Fight the power. Don’t do drugs. Unless, of course, you’re doing them with me.” – Kenny Powers

4. “If you’ve got something you want to say, then just say it.”– Kenny Powers

5. “I can’t believe I opened up my heart up to that bitch. Opened it wide up. And she just squatted with that big beautiful booty and dumped all over it.” – Kenny Powers

6. “I’m sick and tired of carrying all the weight… the coaches and owners not giving me the sh*t I need to win. Atlanta, you’re fu*king out. Kenny Powers is now a free agent. Let’s find a bar and get sh*t-faced.” – Kenny Powers

8. “Ask anybody out there, and they’ll tell you that the foundation of a great baseball player starts with an understanding of some basic fundamentals: running, stretching, physical conditioning. These are the things that prepare your body for the many challenges a baseball player faces.” – Kenny Powers

9. “When my ass was 19 years old, I changed the face of professional baseball. I was handed the keys to the kingdom.” – Kenny Powers

10. “How does any genius figure out his inventions? I mean, how did Leonardo DiCaprio figure out about gravity? ‘Cause the bitch was sleepin’ underneath a tree and an apple hit him on his head.” – Kenny Powers

11. “I play real sports. Not trying to be the best at exercising. F*ck this guy.” – Kenny Powers

12. “Do I have all the attentions of everyone? Attentions please. For those of y’all who do not know who I am, my name is Kenny Powers. And as f*cked-up and weird as it may seem, I used to be a teacher here. But now I return to you. A victor, a champion, a man who has defeated the face of Mexican baseball… not to… get back my old job… f*ck that noise.” – Kenny Powers

13. “Oddly enough, the people here aren’t that different from the ones back home, when you get past the lack of interest in real sports, and the need to have yellow rice at every fuckin’ meal.” – Kenny Powers

14. “Toby, what do you want from me? I’ve been super cool to you. I’ve given you a bowl of Chex Mix and some water. Why are you making curses upon me? If I give you a toy, will that erase the curse?” – Kenny Powers

16. “Sure, I’ve been called a xenophobe, but the truth is I’m not. I honestly just feel that America is the best country and all the other countries aren’t as good. That used to be called patriotism.” – Kenny Powers

18. “Whenever I look at a Mexican I will think of you. Whenever you look at that jackass you think of me, OK?” – Kenny Powers

19. “In most of nature, the alpha is the strongest of the pack. Creature of immense strength, large in size, a leader from birth, hippos, bumblebees, Wayans brothers – most of the time, they just look to the biggest amongst them.” – Kenny Powers

20. “There have been many comebacks throughout history…Well, my comeback is almost complete, and I can say that, when it is complete, it will shake the pillars of this land or town.’” – Kenny Powers

21. “But to capture the heart of one of your teachers, and take her away from you forever. So at this time I would like the beautiful, the forgiving, the talented, big-chested art teacher, to please step forward.” – Kenny Powers

23. “See, in life, when you have talent all the other s**t doesn’t matter. If we were on an island with no weights and no running drills, who would be on top then? The guy with the talent.” – Kenny Powers

25. “Why would you do this to me? Here this whole time I thought you were the whore with a heart of gold. Instead you’re just a whore with a real whore’s heart.” – Kenny Powers

27. “The good thing about getting over depression is…well…you can start to see your enemies more clearly. Suddenly, everyone isn’t an obstacle, just some people are.” – Kenny Powers

28. “A quest is nothin’ if you got no one to brag about it to, will never reach the end if you’re only doing it for yourself. Me, I’m doing it for a girl I had to leave behind just to get this far. Now I gotta go a little further to get back to her. All I can do is hope that one day she’ll understand, and when that day comes, it’s not too late.” – Kenny Powers

29. “A man fights and fights, and then fights some more. Because surrender is death, and death is for p*ssies. And my ass ain’t no p*ssy. My ass is a f*cking champion.” – Kenny Powers

30. “Once upon a time, I believed in destiny, but now I say, F that B. Everything I have in this life, I earned myself. There’s no cosmic luck deciding shit for us. My wealth, my fame, my World Series pennant — I earned myself. The one thing I didn’t earn myself was when I caught crabs. I think I got those from sleeping at a Red Roof Inn.” – Kenny Powers

31. “I brought you guys up from less than f*ckin’ nothin’, and took you up to a championship level, only to abandon you there.” – Kenny Powers

32. “You know what? I can already tell that I don’t like you. And I’m probably not gonna like you no matter how many pull-ups or push-ups you do. All right, anybody who wants to pick on anybody in class, aim for him, ‘cause I’m not watching.” – Kenny Powers

33. “Fundamentals are the crutch for the talentless.” – Kenny Powers

34. “If there’s one thing I hate, it’s losing. If there are two things I hate, then it’s losing and getting cancer.” – Kenny Powers

35. “Purity-it’s what we all desire, and it is what I’ve come here to share with you. Hence the all whites.” – Kenny Powers

36. “Sounds like Fifty Shades of Gross to me, motherf*cker.” – Kenny Powers

37. “Truth be told, things aren’t going as good for me as I led on to believe. The love of my life married some other dude, and my new girlfriend fed her p*ssy to the owner of the baseball team I just quit. I stole homeboy’s car, and now I’m probably a wanted fugitive.”– Kenny Powers

38. “I paid cash for the motherf*cker. Bought it with an advance that I was paid for this, uh… self help novel I’m about to have published onto the Oprah’s book clubs… Pretty much saved all my pennies from my major league days. Invested a lot of it very wisely in stocks, bonds, famous works of arts.” – Kenny Powers

39. “Did this tale end the way I thought it would? Probably not. But as long as I win, who gives a shit.” – Kenny Powers

40. “Everyone wanted a piece of my sh*t. Just a man with a mind for victory and an arm like a f**king cannon. But sometimes when you bring the thunder, you get lost in the storm.” – Kenny Powers

“Chapter One, continued. More of what I was just saying…Never in a million years would I imagine myself being in Mexico. After all, who would? Most Mexicans spend the bulk of their day just trying to get out, so you can hardly blame foreigners like myself for not thinkin’ about gettin’ in.” – Kenny Powers

“How does any genius figure out his inventions? I mean, how did Leonardo DiCaprio figure out about gravity? ‘Cause the bitch was sleepin’ underneath a tree and an apple hit him on his head.” – Kenny Powers

The life of Kenny Powers is very much complex. Once he had a lot of things but after his unstable life and over pride, he lost everything. But what are the reasons behind it and what are the ups and downs of his life? Let’s see them.

In just his 19th year, Kenny led his team Atlanta to the World Series. This was a great achievement in his life. At this age, he becomes the main player of his team and becomes the closing pitcher.

He becomes the most popular player on his team and gets lots of love from the people. But suddenly his life starts falling. At the end of the story, Kenny’s life starts building again from the lowest part of his life.

After the Major League when Kenny led his team Atlanta in World Series, his life start’s going down. No one give the value as he had once. This man start losing everything he had. After losing his sports career, this man was in search of a job but this was wary tough for him.

He get the job of a physical trainer but he could not continue here. His life goes more down and once he had to go the jail. This down condition of Kenny’s life was long but had an end. In the end, he gets his fame again.

The reason behind the Downfall of Kenny Powers

There are so many reasons behind the down of this man’s life. Among them, one is his abrasive personality. This man could do nothing from his passion for a long time and he was always on move.

He settled at several places like Atlanta, New York, San Francisco, Boston, and finally Seattle. These are the changes of his short career. For this aimless life, this man lost his very promising career.

In the end, we can say that when we fall from a very high to a low position and again try to regain the previous position, we had a very deep feeling inside us. These feelings create emotion and also realization.

The situation Kenny Power faces in his life is very pathetic and hard. For that situation, he utters some realistic dialogues that have huge teaching. These dialogues are called Kenny Power quotes.

These quotes are ready to give you some moral teaching and aware you the future would be life of you if you are not serious about your present life. I hope you enjoy these Kenny Power quotes and take teachings from them.