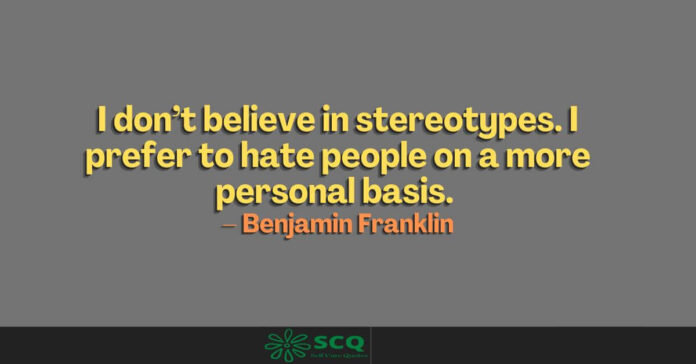 1. The wise say that our failure is to form habits: for habit is the mark of a stereotyped world, – A.C. Grayling

2. Society wants to believe it can identify evil people, or bad or harmful people, but it’s not practical. There are no stereotypes. – Ted Bundy

3. People are not all evil or all good. You don’t teach compassion by categorizing people. Empathy and honest open communication are the only way to live your life. – Shannon L. Adler

4. The most books and movies that are handed to teenagers are filled with stereotypes. – Nat Wolff

5. Every character when born is a stereotype. – Michael Patrick King

6. The only thing that anyone can diagnose, with any certainty, by looking at a fat person, is their own level of stereotype and prejudice toward fat people. – Marilyn Wann

7. Everyone is their own kind of lesbian. To think there’s a certain way to dress or present yourself in the world is just one more stereotype we have to fit into.
– Portia de Rossi

8. Say goodbye to the age-old stereotypes of seduction. Seductive, but not a seductress, a woman wears a scent to reveal her personality. – Paco Rabanne

9. I do try and stay away from the stereotype and getting typecast. – Elisha Cuthbert

11. I just want to continue to break barriers and to show the industry and the world that beauty is diverse, and you don’t have to be a certain stereotype to be beautiful. – Joan Smalls

12. Women are leaders everywhere you look – from the CEO who runs a Fortune 500 company to the housewife who raises her children and heads her household. Our country was built by strong women and we will continue to break down walls and defy stereotypes. – Nancy Pelosi

13. There’s no reason to stereotype yourself. Doing math is like going to the gym – it’s a workout for your brain and it makes you smarter. – Danica McKellar 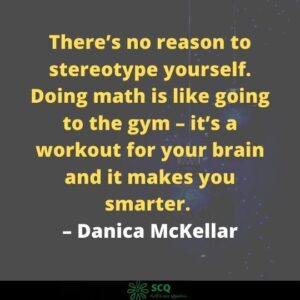 14. I don’t believe in stereotypes. I prefer to hate people on a more personal basis. – Benjamin Franklin

15. Stereotypes lose their power when the world is found to be more complex than the stereotype would suggest. When we learn that individuals do not fit the group stereotype, then it begins to fall apart. – Ed Koch

16. Anything may happen when womanhood has ceased to be a protected occupation. – Virginia Woolf

17. Nobody expects a footballer to have any kind of an IQ, which is a bit of an unfair stereotype. – Frank Lampard

18. We don’t often talk about men being imprisoned by gender stereotypes but I can see that that they are and that when they are free, things will change for women as a natural consequence. – Emma Watson

19. You ought to stop listening to stereotypes and start forming your own opinions. – Stephanie Perkins

20. Stereotypes do exist, but we have to walk through them. – Forest Whitaker

21. Do you really believe … that everything historians tell us about men – or about women – is actually true? You ought to consider the fact that these histories have been written by men, who never tell the truth except by accident. – Moderata Fonte

22. Wherever you find a great man, you will find a great mother or a great wife standing behind him – or so they used to say. It would be interesting to know how many great women have had great fathers and husbands behind them. – Dorothy L. Sayers

23. The problem of unmet expectations in marriage is primarily a problem of stereotyping. Each and every human being on this planet is a unique person. Since marriage is inevitably a relationship between two unique people, no one marriage is going to be exactly like any other. Yet we tend to wed with explicit visions of what a “good” marriage ought to be like. Then we suffer enormously from trying to force the relationship to fit the stereotype and from the neurotic guilt and anger we experience when we fail to pull it off. – M. Scott Peck

25. I consider it part of my responsibility as President of the United States to fight against negative stereotypes of Islam wherever they appear. – Barack Obama

26. All stereotypes turn out to be true. This is a horrifying thing about life. All those things you fought against as a youth: you begin to realize they’re stereotypes because they’re true. – David Cronenberg 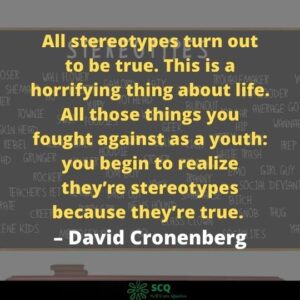 27. Attempting to get at truth means rejecting stereotypes and cliches. – Harold Evans

29. The moment there is imagination there is myth – Camille Paglia

30. There are a lot of stereotypes to be broken which I think a lot of us are doing. What I do is, as soon as people try to pin me down to one kind of part, I’ll play a very different kind of role, so it explodes that stereotype. – Joan Chen

31. The whole idea of a stereotype is to simplify. Instead of going through the problem of all this great diversity – that it’s this or maybe that – you have just one large statement; it is this. – Chinua Achebe 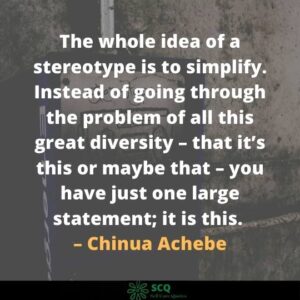 32. Once you label me you negate me. – Soren Kierkegaard

33. The emotional, sexual, and psychological stereotyping of females begins when the doctor says: It’s a girl. – Shirley Chisholm

34. I didn’t want to let women down. One of the stereotypes I see breaking is the idea of aging and older women not being beautiful. – Annie Leibovitz

35. We can each define ambition and progress for ourselves. The goal is to work toward a world where expectations are not set by the stereotypes that hold us back, but by our personal passion, talents, and interests. – Sheryl Sandberg

36. Not all ‘whites’ are racists. Not all racists are ‘white. – Mokokoma Mokhonoana

37. The thing about stereotyping is it’s usually just throwing rocks into a crowd hoping to hit somebody who deserves it. – Criss Jami 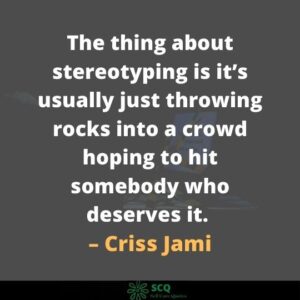 39. It’s not a stereotype if it’s always true. – Daniel Tosh

40. Some people can’t fit the mould that’s made for them…They get squashed in. And it’s hard for them to leave, but it’s harder for them to stay. They have to find other ways to be. – C.J. Flood

43. Age is something only in your head or a stereotype. Age means nothing when you are passionate about something. – Carolina Herrera

44. You are not your illness. You have an individual story to tell. You have a name, a history, a personality. Staying yourself is part of the battle. – Julian Seifter

45. Calling it lunacy makes it easier to explain away the things we don’t understand. – Megan Chance

46. ….. it would be interesting to find out what goes on in that moment when someone looks at you and draws all sorts of conclusions. – Malcolm Gladwell

48. Stereotypes are fast and easy but they are lies, and the truth takes its time. – Deb Caletti 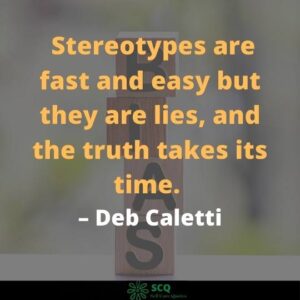 49. Stereotypes are lazy thought; we don’t need to listen or observe as we feel we know already. Except we don’t – we just have a head full of prejudices.

50. Stereotypes exist because they are useful. They reduce the tremendous complexity of the world around us into a few simple guidelines, which we use in our everyday thoughts and decisions. However, the simpler and more convenient the stereotype, the more likely it is to be inaccurate, at least in part. – Stuart Oskamp