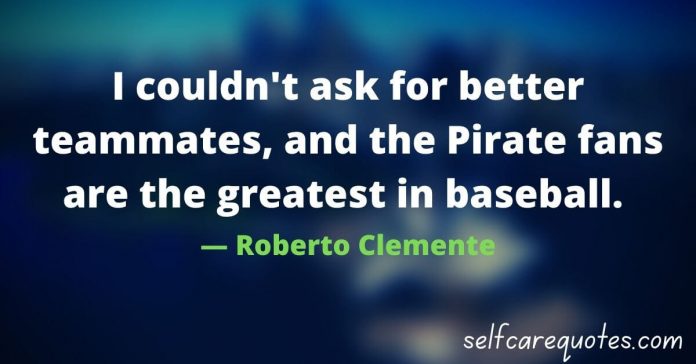 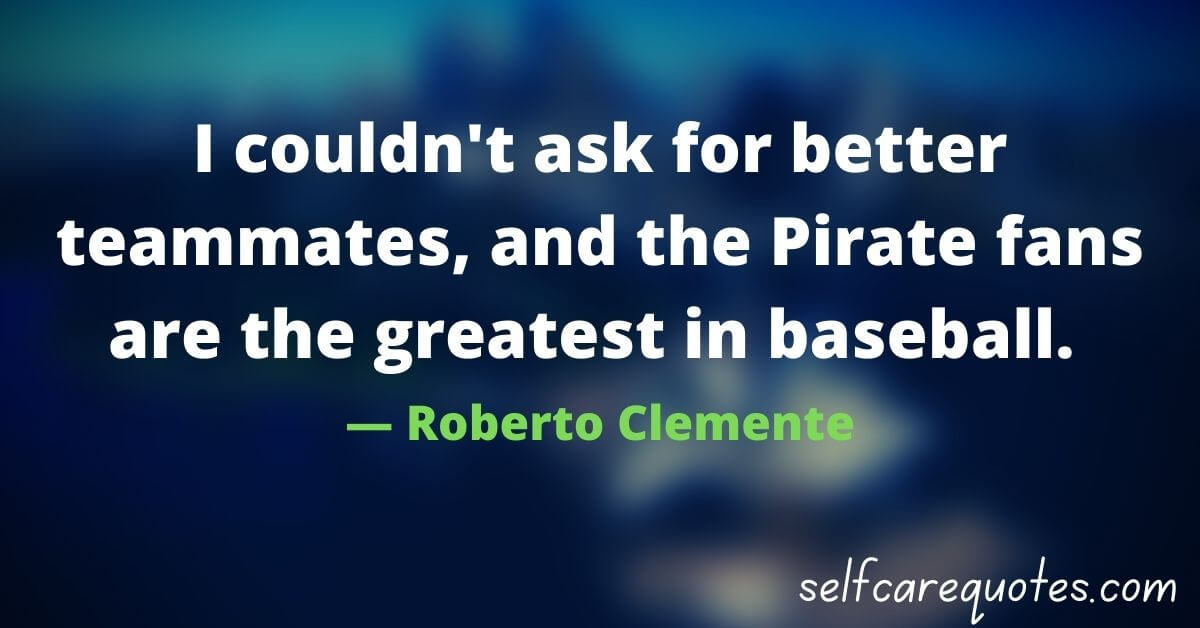 1. I couldn’t ask for better teammates, and the Pirate fans are the greatest in baseball.  — Roberto Clemente

2. Pitch me outside, I will hit .400. Pitch me inside, and you will not find the ball. — Roberto Clemente

3. If you have a chance to accomplish something that will make things better for people coming behind you, and you don’t do that, you are wasting your time on this earth. — Roberto Clemente

5. I want to be remembered as a ballplayer who gave all I had to give.— Roberto Clemente

6. I am more valuable to my team hitting .330 then swinging for home runs.— Roberto Clemente

7. The first day that I get to Fort Myers, there was a newspaper down there. The newspaper said, ‘Puerto Rican hot dog arrives in town.— Roberto Clemente

8. I wasn’t ready for the majors when I joined the Pirates in 1955. I was too young and didn’t know my way around.— Roberto Clemente

9. They said you’d really have to be something to be like Babe Ruth. But Babe Ruth was an American player. What we needed was a Puerto Rican player they could say that about, someone to look up to and try to equal.— Roberto Clemente

10. I am convinced that God wanted me to be a baseball player.— Roberto Clemente

11. But some people act like they think I live in the jungle someplace.— Roberto Clemente

12. I was born to play baseball.— Roberto Clemente

13. If I would be happy, I would be a very bad ball player. With me, when I get mad, it puts energy in my body.— Roberto Clemente

14. My mother has the same kind of an arm, even today at 74. She could throw a ball from second base to home plate with something on it. I got my arm from my mother.— Roberto Clemente

15. I used to watch Monte Irvin play when I was a kid. I idolized him. I used to wait in front of the ballpark just for him to pass by so I could see him.— Roberto Clemente

16. The Dodgers told me a big bonus was no good, and they said other players would resent it. Better for me to take a small amount of money and work my way.— Roberto Clemente

17. Look at my skin – I am not of the white people.— Roberto Clemente

20. The farther away you writers stay, the better I like it. You know why? Because you’re trying to create a bad image of me… you do it because I’m black and Puerto Rican, but I’m proud to be Puerto Rican.— Roberto Clemente

21. To the people here, we are outsiders. Foreigners.— Roberto Clemente

22. After I failed to win the Most Valuable Player Award in 1960, I made up my mind I’d win the batting title in 1961 for the first time.— Roberto Clemente

23. I loved the game so much that even though our playing field was muddy and we had many trees on it, I used to play many hours every day.— Roberto Clemente

24. Brooklyn was a famous team. I wanted to play for the Dodgers.— Roberto Clemente

25. “When I put on my uniform, I feel I am the proudest man on earth.— Roberto Clemente

Baseball has been very good to me.— Roberto Clemente

Who was Roberto Clemente?

The introduction of Roberto Clemente is going to be a little long because his achievements and his career all are part of his introduction. Roberto Clemente was a Puerto Rican baseball player. In baseball, his role was as a right fielder. In his baseball career, he played 13 seasons of Major League Baseball. He played all these seasons for Pittsburgh Pirates.

After the death of this famous baseball player, people still want to know about him. To know about him, people depend on his biography. Here we are going to discuss the short biography of Roberto Clemente. So, let’s start.

Theis famous Baseball player’s early life was not so happy. Roberto Clemente was born in Barrio San Antón, Carolina, Puerto Rico in August 18, 1934. His parents are Melchor Clemente and Luisa Walker. He was the youngest of  7 children in his family.

Because of the limited resources of his family, Roberto and his brothers had to work with his family from an early age. In his teenage years, he played baseball with his neighbors. He also played for his school. From his school, he was discovered as a baseball player.

The educational life of Roberto Clemente is short. As I already said, for the resource limitation of his family, he had to work with his father in the sugarcane business. He mainly did loading and unloading of sugarcane from the truck. In the meantime, he attended a high school called Julio Vizcarrondo Coronado High School. This school was located in Carolina. In the first year of his schooling, he got an offer to play baseball. And he left his schooling.

The playing career of Roberto Clemente is not long because of his death. But he achieved huge fame and popularity around the country as a baseball player. For 13 seasons, Roberto Clemente was an all-star. He was also the most valuable player of the National League in 1966. In his career, he owns 12 consecutive Gold Glove Award seasons. Besides these, Roberto Clemente has a lot of other achievements.

We follow people if they have some good qualities to follow. As we are talking about the reason for following Roberto Clemente, we will try to find reasons to follow him. The most powerful quality of him is his love for his profession. He loved playing Baseball a lot. His quotes bear proof that his love for baseball was at a high level. He thinks that all his goodness is brought to him by baseball.