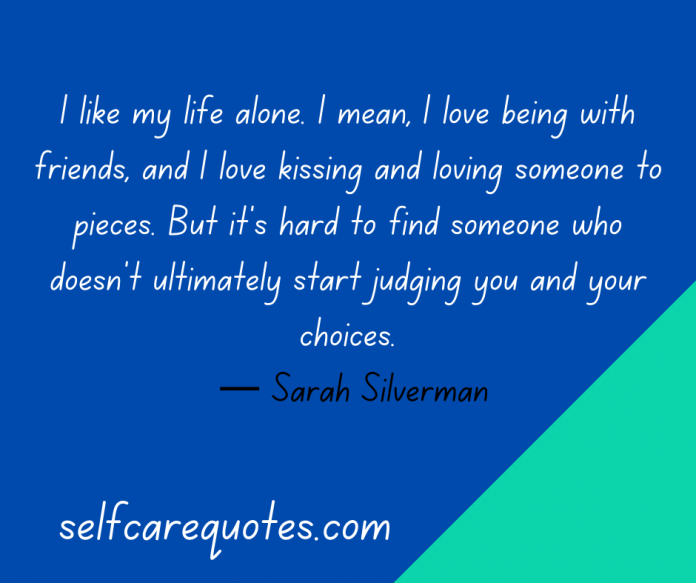 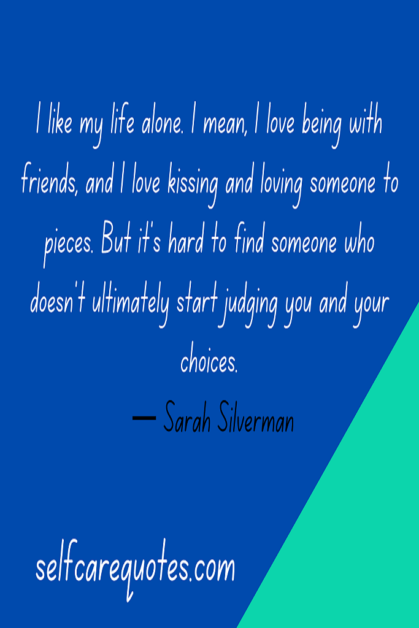 1. I like my life alone. I mean, I love being with friends, and I love kissing and loving someone to pieces. But it’s hard to find someone who doesn’t ultimately start judging you and your choices. — Sarah Silverman

2. Your inability to see yourself clearly is what’s keeping you alive. — Sarah Silverman

3. We don’t live in a democracy; we live in a hypocrisy.— Sarah Silverman

4. People are always introducing me as Sarah Silverman, Jewish comedienne. I hate that! I wish people would see me for who I really am — I’m white!— Sarah Silverman

5. Jews, black people – any people who are hated or who have suffered, either as individuals or as a people – use humour. It is a survival skill.— Sarah Silverman

6. If you take a shower with your boyfriend, I guarantee by the time you step out of that shower, your breasts will be sparkling clean.— Sarah Silverman

7. Letting your freak flag fly is something, no matter who you are, that takes great bravery, straight up.— Sarah Silverman

8. I do enjoy and feel compelled to talk about things that are taboo. One, because I think I’m a troublemaker inside, if someone says, “Don’t say that,” it’s all I want to say. And also, something I learned in therapy … which is darkness can’t exist in the light, and then that made me think of something that Mr. Rogers said, which is, “If it’s mentionable, it’s manageable.”— Sarah Silverman

9. And we’re just all made of molecules and we’re hurtling through space right now.— Sarah Silverman

Who is Sarah Silverman?

If you live in the USA and love comedy then you might know the name, Sarah Silverman. This is a remarkable name in the field of comedy in the USA. Sarah Silverman is a standup comedian, writer, actress, and also singer. All these qualities are packed in her. For her comic TV show Saturday Night Live, Sarah Silverman was awarded the Primetime Emmy Award for lead actor.

This was her most famous which ran from 2007 to 2010. Besides this, Sarah Silverman acted and produced two more shows called Mr. Show and V.I.P. She also acted in films. Some of her famous movies are “Wreck-It Ralph”, “A Million Ways to Die in the West”, “School of Rock” etc. Besides these famous talents, Sarah Silverman has a hidden talent. Here that talent is quoting. Sarah Silverman quotes also have very much popularity in her fans.

10. We need to stop telling girls they can be anything they want when they grow up. Because it would have never occurred to them that they couldn’t.— Sarah Silverman

11. I am 39 years old, and I still wake up every morning really excited I don’t have to go to school.— Sarah Silverman

13. I hope the Jews did kill Christ, I’d do it again in a second.— Sarah Silverman

15. I think the difference between being miserable and finding happiness is just a matter of perspective. If you live your life defining yourself by what other people think of you, it’s a form of self-torture.— Sarah Silverman

16. She, uh, came out of the closet recently, my niece. Um… She announced to the family that she’s a lesbian and… She’s seven, did I mention that? And, uh, I don’t even know if she knows what a lesbian is, but I support her completely. And, uh… I’ll tell you what’s heartbreaking. My sister punished her for it. Can you believe that? No pussy for a week. Which to us may not sound like… But when you’re seven, you know, a week is a long time.— Sarah Silverman

17. Women don’t ask to be raped, but there are some that are asking to be motorboated— Sarah Silverman

18. I love going to weddings. And I love it when my friends get married. I’m not against marriage but it’s just not for me. I’m a vegetarian, but I don’t have a problem if you want a hamburger.— Sarah Silverman

19. Martin Luther King? I had a dream, too.— Sarah Silverman

20. I like talking about things that are taboo because it makes them not taboo anymore.— Sarah Silverman

21. I got jury duty and I didn’t want to go, so my friend said, “You should write something really really racist on the form when you return it. Like, you should put ‘I hate chinks’.” And I said, “I’m not going to put that on there just to get out of jury duty. I don’t want people to think that about me.” So instead I wrote, “I love chinks.” And who doesn’t?— Sarah Silverman

22. I commend you on all you’ve done for PETA, wrestling the one-eyed trouser snake with your bare hands, gently cuddling it in your arms, and nurturing it back to health.— Sarah Silverman

23. The best time to have a baby is when you’re a black teenager.— Sarah Silverman

24. Since so many people these days don’t seem to start their families until around age forty, I predict there will be less child beating, but more slipped disks from lifting babies out of cribs. Even the father of advanced age who’s not inclined to spare the rod is likely to suffer more than his victim: The first punch he throws might well be the last straw for his rotator cuff, reducing his disciplinary options to mere verbal abuse and napping.— Sarah Silverman

25. Everybody blames the Jews for killing Christ, and the Jews try to pass it off on the Romans. I’m one of the few people who believe it was the blacks.— Sarah Silverman

26. I have no religion. But culturally I can’t escape it; I’m very Jewish.— Sarah Silverman

27. People say, like, “I love when you smile because part of your mouth goes up,” then I never organically smile again.— Sarah Silverman

28. I don’t compromise. I only do the stuff I want to do.— Sarah Silverman

29. I didn’t lose my virginity until I was twenty-six. Nineteen vaginally, but twenty-six what my boyfriend calls “the real way”.— Sarah Silverman

30. The sun shines directly on this great country, and it can be harvested, it’s not owned by anybody. It’s something the Jews and the Palestinians share and could work together to make the whole world a better place, not just this Middle East stuff, but the whole world.— Sarah Silverman

31. I’m all sentimental. I’ve probably been ruined by romantic movies, but I really do believe in love. I’ve experienced it, I’ve had it, so I know it’s real.— Sarah Silverman

32. When God gives you AIDS – and God does give you AIDS, by the way – make lemonAIDS.— Sarah Silverman

33. I am Jewish and proud of this culturally and ethnically – the ways in which I was born this way and am happy with whom I am.— Sarah Silverman

35. Everyone self-Googles. And, I have, of course, the Google alert.— Sarah Silverman

36. When you’re a bed wetter there’s only one group of people you can feel better than, bed shitters, and unfortunately, they’re hard to come by.— Sarah Silverman

37. A bull in just about any shop is gonna be a mess.— Sarah Silverman

38. If I don’t do stand-up for two weeks, I get freaked out.— Sarah Silverman

39. What makes Disney movies and Pixar movies always so good, hey take time and they’re constantly honing, and tweaking, and rejiggering things, and taking influences from every cog, including myself, that can help. Any place where there can be inspiration. They make every moment very layered and very rich.— Sarah Silverman

40. I mean, I love being with friends and I love kissing and loving someone to pieces. But it’s hard to find someone who doesn’t ultimately start judging you and your choices.— Sarah Silverman

41. I buy water at the liquor store across the street from where I live. So I’m walking into the door, and standing, loitering, outside the door is a man. And I walk by him to go in, and he says, “I want pussy!” Now, I don’t want to seem conceited or anything, but he was talking about me!— Sarah Silverman

43. When I was 17, I read a profile of Carol Leifer. Since then, I wanted to be her. I still want to be her.— Sarah Silverman

44. I do love poop. I can’t help it. The heart wants what it wants. I enjoy being clever and pithy and political, but nothing’s going to get me like dumb stuff.— Sarah Silverman

45. Take lots of time for yourself, discovering yourself-pursue not only a profession but other life passions, I always make time to rock climb or hike or write a few short stories. Also, find good people and surround yourself with them. Most importantly, always believe you will, unequivocally.— Sarah Silverman

46. I am diagnosed with not having enough insanely-addictive drugs coursing through my body.— Sarah Silverman

47. Drew Friedman isn’t just a brilliant artist. He takes you to a place. He takes you back in time. He makes you smell the stale cigarettes and cold brisket and you say, thank you for the pleasure.— Sarah Silverman

48. You’re supposed to have friends you can tell anything to.— Sarah Silverman

49. Relations between black and white would be greatly improved if we were more accepting of our fears and our feelings and more vocal about it.— Sarah Silverman

50. If you quit being cunty, the whole world will stop being against you.— Sarah Silverman

The biography helps us to know more about a person. Sarah Silverman has an autobiography that contains vast information about her. But here we are going to discuss her biography in short.

Sarah performed her first standup comedy in Boston when she was 17 years old. Her career in comedy seriously started in 1993 with Saturday Night Live. here she played the role of writer and featured actor. After that, she performed in different places and different shows. Sarah’s subject matter of comedy was the social taboo. Sarah Silverman acted in the first movie released in 1997. This was the beginning of her acting career.

Sarah Silverman is aware of social problems. For that reason, she always tries to make comedy on these problems and try to show the right way to people. This is a good quality of her. For this reason, people can follow her. Sarah Silverman reveals her as a secular person.

Though her birth is in a Jew family she does not believe in any god. The people who think like her can follow her. Sarah Silverman has mastery of Tv hosting and standup comedy. Her comic mind and thoughts are worth enough to follow. Sarah Silverman quotes also have an appeal to attract people’s attention. This is another quality to follow.

One single person can be gifted with many qualities and a very good example of that is Sarah Silverman herself. She is a multi-talented woman with special capability in comedy and acting and also in quotes.