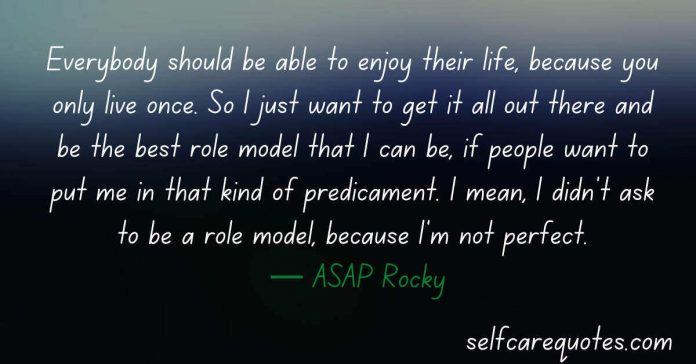 Rakim Athelaston Mayers Is known as ASAP Rocky. If you want to introduce him then we have to talk about his profession fast.

But Rocky’s profession is not one. He is at a time a rapper, singer, songwriter, music director, actor, and many other things.

The most interesting thing about him is he is famous in almost all the sections of song and acting. As a singer, Rocky achieved a huge number of awards.

Some of his songs and albums have tremendous popularity among people. He is one of the few singers who suddenly rose to the top of the list and still he is admired by a huge number of people. Besides famous songs, Rocky has many famous quotes. Asap Rocky quotes make him more popular. 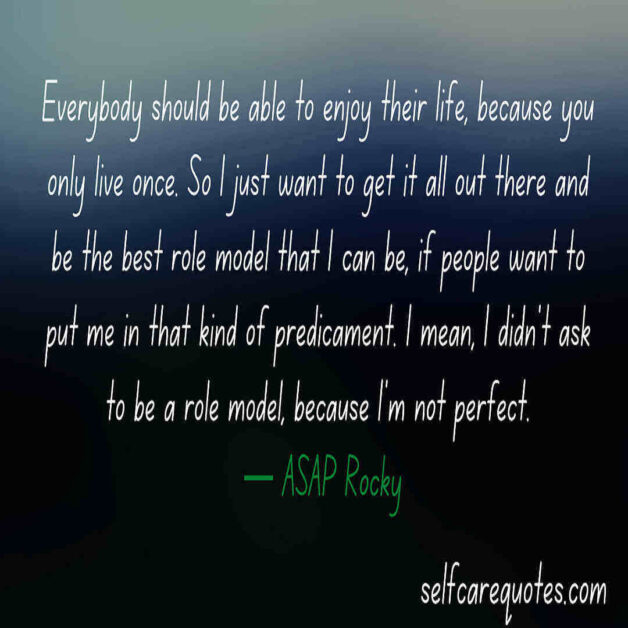 1. Everybody should be able to enjoy their life, because you only live once. So I just want to get it all out there and be the best role model that I can be, if people want to put me in that kind of predicament. I mean, I didn’t ask to be a role model, because I’m not perfect.  — ASAP Rocky

2. Man gave us laws, and God gave us time,
It’s the art of storytelling and I’m only telling mine.— ASAP Rocky

3. I want to be the first guy to help people accept everybody for who they are. I’m talking about colors, religions, sex, everybody. My music is for everybody, it’s not just for one kind of group.— ASAP Rocky

4. I don’t want people to get the impression that I just got money and now I’m cocky, because I’m not. I’m just a little overly confident.— ASAP Rocky

6. Rihanna is a pothead and so am I, so we’re real cool. Weed is going to bring us together as a generation. Drugs is what created Woodstock. Let’s be clear about that.— ASAP Rocky

7. I used to be homophobic, but as I got older, I realized that wasn’t the way to do things. I don’t discriminate against anybody for their sexual preference, for their skin color… that’s immature.— ASAP Rocky

9. Probably, violent things I’ve done when I was younger, was probably the most despicable thing that I’ve ever done.— ASAP Rocky

10. I’ve been into fashion since birth. I grew up in the ‘hood, and everybody in the ‘hood wants to compensate for being in poverty, so they want to look good to keep themselves up.— ASAP Rocky

11. When Big Meech and everybody got indicted, hustling died. Keep it trill.— ASAP Rocky

12. I’ve got so much in my brain and I want to change the way we think sometimes.— ASAP Rocky

14. God is letting me shine, because I’ve got a good heart.— ASAP Rocky

16. If a chick wants to know who makes my shoes, she’s got to take them off my feet and look inside.— ASAP Rocky

17. I’m not glorifying it at all, I’m just basically telling you that sometimes I have suicidal thoughts. And maybe I should seek help, or maybe it’s not that deep.— ASAP Rocky

18. All of the young people – the artsy people, people who get overlooked because they’re weird or they don’t have hype around them – need to get some shine.— ASAP Rocky

19. I dress how I feel. I just go off emotion. I can’t prepare my outfit a day before. Everything I wear is spontaneous.— ASAP Rocky

20. I thought highly of myself growing up. I still do. There’s not really much somebody can say to me to bring down my confidence or anything.— ASAP Rocky

21. I want to make my own path and leave behind a good legacy for myself and honestly, I just want to be innovative and always down for other people. That’s what I want to be remembered by. I want to inspire.— ASAP Rocky

22. Nowadays, everybody wanna be weird. We know how to manifest being weird.— ASAP Rocky

24. We could fight the fuss till we get like friends,
Or somebody bite the dust and we split like ends.
Even in our wildest moments, girl, I’m on it cause you’re worth it.
Practice makes perfect, so we fightin’ for a purpose.— ASAP Rocky

25. Fashion is almost like a religion, for me at least.— ASAP Rocky

27. I didn’t want to be a loser, but I didn’t want to fit in at the same time because I don’t like just being ordinary. So it’s one of those situations where I always kept my head up.— ASAP Rocky

28. Everybody should be able to enjoy their life, because you only live once. So I just want to get it all out there and be the best role model that I can be, if people want to put me in that kind of predicament. I mean, I didn’t ask to be a role model, because I’m not perfect.— ASAP Rocky

30. There’s just so much out there and so much inspiration… I just want to be tasteful.— ASAP Rocky

32. I was thinking about naming my child Kanye.— ASAP Rocky

33. Design my own line? No, I just like the culture.— ASAP Rocky

34. You ready? I have gold teeth, I have braids, I’m wearing Rick Owens moon boots, I have rips in my denim, a biker vest, I love artsy girls, my favourite artists are Jimi Hendrix and John Lennon. I’m obsessed with being different.— ASAP Rocky

35. I’m starting to find out that a lot of people that you wouldn’t think listen to me really do.— ASAP Rocky

36. Young boy, let his gun bang, let his nuts hang
Transition to a Lamborghini from a Mustang
Drugs slang in the drug game with the hustling
(I know one thing) Anything is better than that 1 train— ASAP Rocky

38. Why can’t I be friends with somebody who’s gay? Why not? You can miss out on a lot by being so small-minded and stereotypical about people. It’s stupid.— ASAP Rocky

39. I strive for perfection, but Im not perfect. But what I can say is my morals are totally different than any other 24-year-old rapper my age now. I look at life totally different. A whole other aspect. I have different views and morals on life in general. And opinions.— ASAP Rocky

40. So for me, fashion was about standing out as an individual – and it helped me get the attention that most people try to get with publicity stunts or by doing other crazy things. But I just let the attention come to me naturally, and I think some of that has to do with my fashion.— ASAP Rocky

41. With clothes, I like mixing what different designers do until it becomes a personal expression of how I’m feeling that day.— ASAP Rocky

43. It would be disrespectful to take my stardom and bully my way into the fashion industry.— ASAP Rocky

44. I take cabs if I need to get somewhere or I take car service. I don’t drive, I wouldn’t mind riding a bike… People think that because you become an entertainer you gotta have this rock star thug image. I’m an artist, man. I’m going to live like an artist.— ASAP Rocky

45. I’m from New York and I love New York and I’m always repping New York, but what I represent is something deeper than just being a New York rapper.— ASAP Rocky

46. In Harlem, I got all my black friends. But when I go downtown, I got black, white, Asian, Indian friends. There’s no borders, no barriers.— ASAP Rocky

47. It bring a tear to my eye to see native New York people give me my props because New York is stubborn and arrogant.— ASAP Rocky

48. I treat everybody equal, and so I want to be sure that my listeners and my followers do the same if they’re gonna represent me. And if I’m gonna represent them, then I also want to do it in a good way.— ASAP Rocky

50. I dress how I feel. I just go off emotion. I can’t prepare my outfit a day before. Everything I wear is spontaneous.— ASAP Rocky

As we know that the main name of ASAP Rocky is Rakim Athelaston Mayers. On October 3 1988 when he was born, his parents gave him the name Rapper Rakim. From then, an interest in rapping grew in him.

When his age was 9, he started rapping. His elder brother helped him to learn rap. At the age of 12, Rocky lost his father as his father was convicted into jail for selling drugs. His brother also left him forever in 2012. The death of his brother inspired him to become a rapper fast.

In his early life, Rocky was busy with some of his business. Sometimes drug dealing and other business. As he was busy with his profession, he did not get time to study. We find no reference to his education.

But told the media in an interview that he studied. He listened to the news of his brother’s death in the time of his school going. He might have been a student of Bayard Rustin Educational Campus.

After completing a long learning period, Rocky started his singing career with ASAP Mob. ASAP Mob is a rapper, producer, and Music Director. He started singing with them in 2007. In 2011 Rocky released his first solo song “Purple Swag”.

Within a very short time, this song became very famous in the USA. After this, his popularity continues growing and he also continues singing. Now his popularity is everywhere. He achieves different national and international awards.

To follow someone, they need some reasons. ASAP Rocky is a famous singer. He has many qualities to follow. We all the past of Rocky was dark. He and his family members were drug dealers. But the transformation of Rocky from the bad side to an art world is really appreciating.

We can follow this positive change. His hard work to overcome poverty and need also can be followed. The realistic and inspiring quotes Rockey gives to his fans also worth following. We can follow ASAP Rocky quotes.

A person who has an artistic mind can be ideal for others. Rocky is a famous singer. He tries to entertain via his song and he tries to instruct people via his quotes. You can read and follow ASAP Rocky quotes for your benefit.