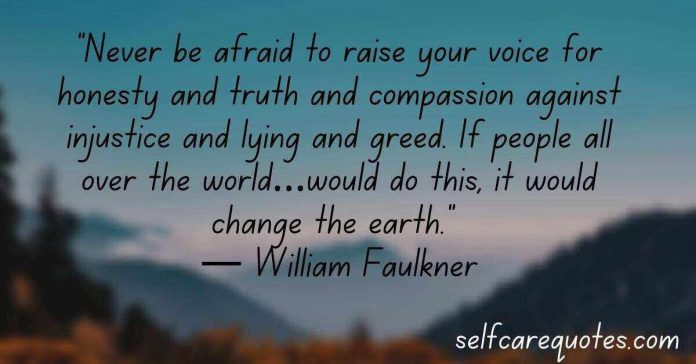 Who is William Faulkner?

He is a multi-talented person who can write novels, short stories, screenplays, poetry, and essays. But his main talents are novels and short stories. Besides his Nobel prize, his two other writings won the Pulitzer Prize.

If you see the list of 100 best novels of English literature then you will find two novels by William Faulkner. His other successful sector is his quotes. William Faulkner quotes are the soul of his writings. These make him more famous. People of any age or class can follow these quotes.

1. “Never be afraid to raise your voice for honesty and truth and compassion against injustice and lying and greed. If people all over the world…would do this, it would change the earth.” — William Faulkner

2. “You cannot swim for new horizons until you have courage to lose sight of the shore.” — William Faulkner

4. “I’m bad and I’m going to hell, and I don’t care. I’d rather be in hell than anywhere where you are.” — William Faulkner

6. “Dreams have only one owner at a time. That’s why dreamers are lonely.” — William Faulkner

7. “A man is the sum of his misfortunes. One day you’d think misfortune would get tired but then time is your misfortune.” — William Faulkner

8. “In writing, you must kill all your darlings.” — William Faulkner

9. “The next time you try to seduce anyone, don’t do it with talk, with words. Women know more about words than men ever will. And they know how little they can ever possibly mean.” — William Faulkner

10. “Perhaps they were right putting love into books. Perhaps it could not live anywhere else.” — William Faulkner

11. “Unless you’re ashamed of yourself now and then, you’re not honest.” — William Faulkner

12. “The man who removes a mountain begins by carrying away small stones.” — William Faulkner

13. “Read, read, read. Read everything — trash, classics, good and bad, and see how they do it. Just like a carpenter who works as an apprentice and studies the master. Read! You’ll absorb it. Then write. If it’s good, you’ll find out. If it’s not, throw it out of the window.” — William Faulkner

14. “We must be free not because we claim freedom, but because we practice it.” — William Faulkner

15. “Get it down. Take chances. It may be bad, but it’s the only way you can do anything good.” — William Faulkner

17. “Given the choice between the experience of pain and nothing, I would choose pain.” — William Faulkner

18. “I give you the mausoleum of all hope and desire…I give it to you not that you may remember time, but that you might forget it now and then for a moment and not spend all of your breath trying to conquer it. Because no battle is ever won he said. They are not even fought. The field only reveals to man his own folly and despair, and victory is an illusion of philosophers and fools.” — William Faulkner

19. “The saddest thing about love, Joe, is that not only the love cannot last forever, but even the heartbreak is soon forgotten.” — William Faulkner 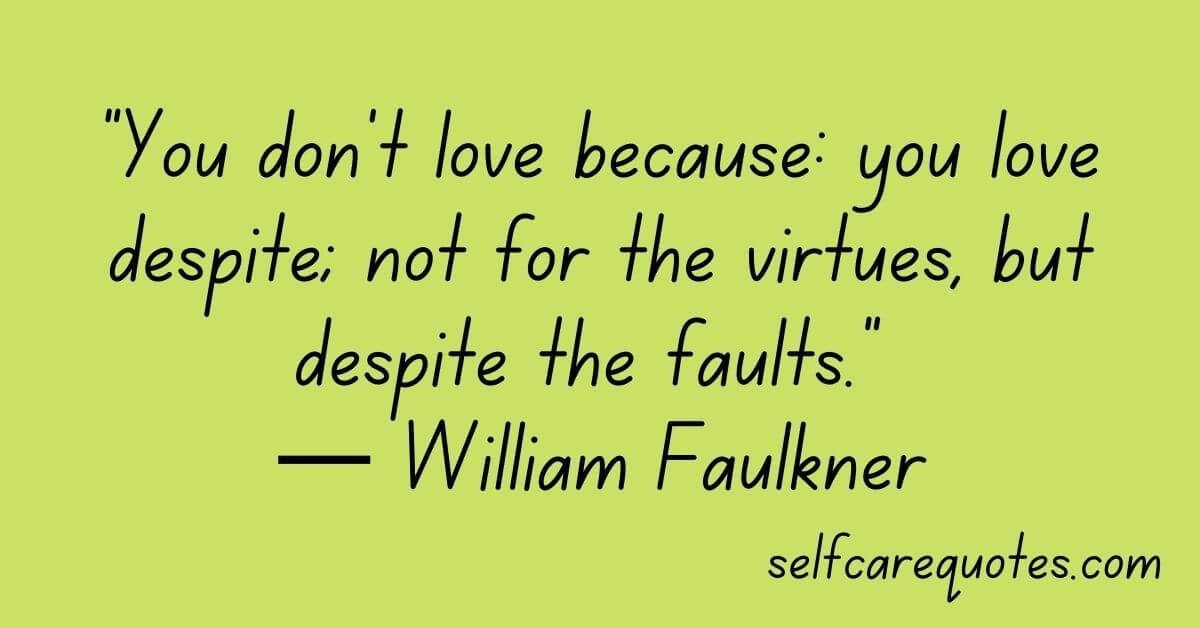 20. “You don’t love because: you love despite; not for the virtues, but despite the faults.” — William Faulkner

23. “The best fiction is far more true than any journalism.” — William Faulkner

25. “It is the writer’s privilege to help man endure by lifting his heart.” — William Faulkner

26. “A writer needs three things, experience, observation, and imagination, any two of which, at times any one of which, can supply the lack of the others.” — William Faulkner

28. “I feel like a wet seed wild in the hot blind earth.” — William Faulkner

29. “Clocks slay time… time is dead as long as it is being clicked off by little wheels; only when the clock stops does time come to life.” — William Faulkner

31. “How often have I lain beneath rain on a strange roof, thinking of home.” — William Faulkner

32. “The aim of every artist is to arrest motion, which is life, by artificial means and hold it fixed so that a hundred years later, when a stranger looks at it, it moves again since it is life.” — William Faulkner

33. “A writer must teach himself that the basest of all things is to be afraid.” — William Faulkner

34. “War and drink are the two things man is never too poor to buy.” — William Faulkner

35. “Some things you must always be unable to bear. Some things you must never stop refusing to bear. Injustice and outrage and dishonor and shame. No matter how young you are or how old you have got. Not for kudos and not for cash: your picture in the paper nor money in the bank either. Just refuse to bear them.” — William Faulkner

36. “Pouring out liquor is like burning books.” — William Faulkner

39. “The only thing worth writing about is the human heart in conflict with itself.” — William Faulkner

40. “An artist is a creature driven by demons. He doesn’t know why they choose him and he’s usually too busy to wonder why.” — William Faulkner

41. “Most men are a little better than their circumstances give them a chance to be.” — William Faulkner

42. “It takes two people to make you, and one people to die. That’s how the world is going to end.” — William Faulkner

William Faulkner Quotes About The Past

43. The past is never dead. It’s not even past. All of us labor in webs spun long before we were born, webs of heredity and environment, of desire and consequence, of history and eternity. Haunted by wrong turns and roads not taken, we pursue images perceived as new but whose providence dates to the dim dramas of childhood, which are themselves but ripples of consequence echoing down the generations. The quotidian demands of life distract from this resonance of images and events, but some of us feel it always. — William Faulkner 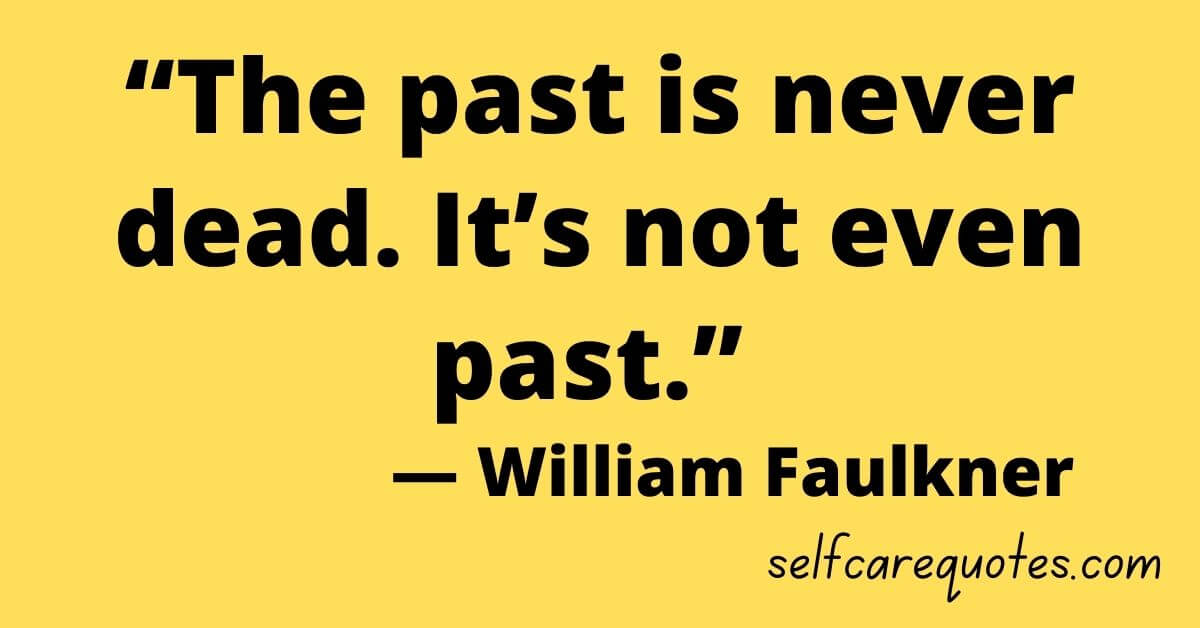 44.“The past is never dead. It’s not even past.” — William Faulkner

45. “People to whom sin is just a matter of words, to them salvation is just words too.” — William Faulkner

46. “All of us have failed to match our dream of perfection. I rate us on the basis of our splendid failure to do the impossible. If I could write all my work again, I’m convinced I could do it better. This is the healthiest condition for an artist. That’s why he keeps working, trying again: he believes each time that this time he will do it, bring it off. Of course, he won’t.” — William Faulkner

48. “Dear God, let me be damned a little longer, a little while.” — William Faulkner

49. “And sure enough, even waiting will end…if you can just wait long enough.” — William Faulkner

50. “A gentleman accepts the responsibility of his actions and bears the burden of their consequences.” — William Faulkner

To know better about William Faulkner, we have to read his biography. Here we are discussing the short biography of him.

This famous writer of the USA was born on September 25, 1897. His birthplace is New Albany, Mississippi. He is called the laureate of Mississippi for his birthplace.

William Faulkner’s parents are Murry Cuthbert Falkner and Maud Butler. He was brought up with his 3 more younger brothers. His family moved to Ripley soon after his birth. William Faulkner’s early life was not so happy. His father had moved to many places in search of a good business.

He dropped himself out of school to start working. He loved playing instead of studying. He also tried himself at the University of Mississippi but here also he could not continue.

The early writing of William Faulkner was poems. He wrote poems from his adolescence. But his first novel was published in 1925. He was very productive from the beginning.

He wrote more than 13 novels before World War ii. Some of his famous writings are The Sound and the Fury, As I Lay Dying, Light in August, Absalom, Absalom! etc. William Faulkner won the Nobel Prize at the age of 52 for special writings.

He has no high degree from any reputed university but he wrote some classic novels that help him to be a Nobel prize winner and the winner of millions of hearts. Besides these William Faulkner quotes are special.

His deep thoughts and imagination help him to get very good observations of human life. His quotes are the interpretation of human character and psychology. This quality of him also can be followed.

No one can get popularity without special quality. William Faulkner is a person who is loved by a huge number of people even after his death. His novels and his quotes make him famous even today.