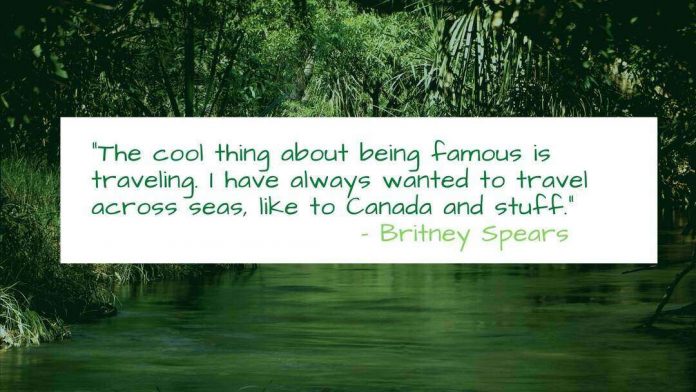 Britney Spears is renowned for her excellence in diverse fields like singing, dancing, and acting. She is a well-known American singer, actor, and dancer. Her full name is Britney Jean Spears. This multi-talented singer also astonished her fans through her talent in writing the songs. We may find her significant contribution to pop music. Britney Spears had a significant influence on the revival of pop music’s popular subgenre, ‘teen pop.’

For her outstanding contribution, she has been given an honorific nickname. Britney’s fans know her as the ‘princess of pop.’ In every sector, she has proved to be worthy of such honor and love. We can be acquainted with the excellence of this multi-talented person by looking over her words. Britney Spears quotes will inspire you to live in your way.

1. “The cool thing about being famous is traveling. I have always wanted to travel across seas, like to Canada and stuff.” – Britney Spears 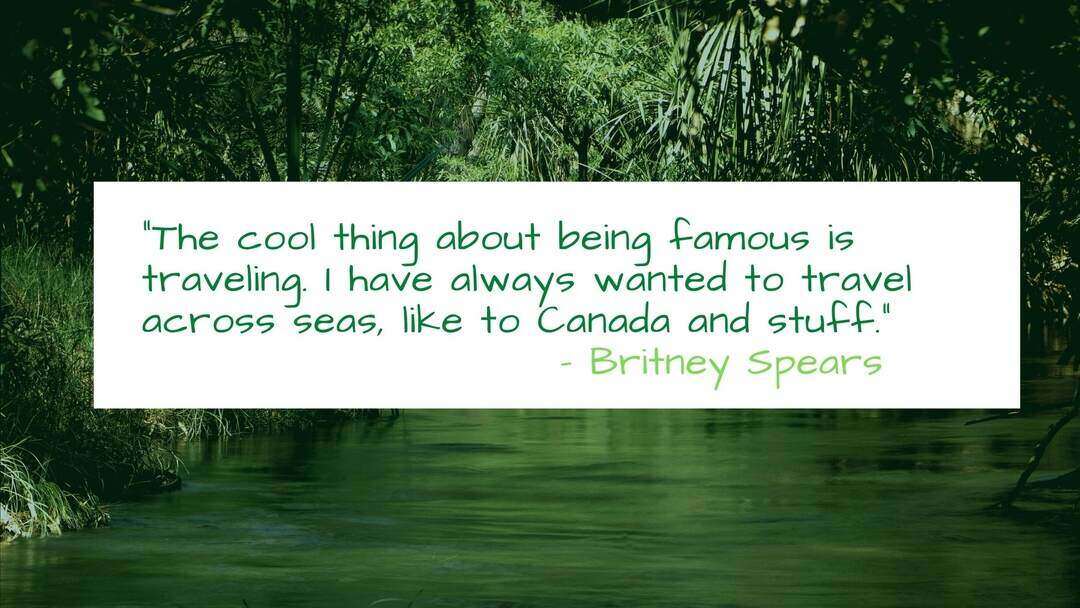 2. “I definitely like to go out and dance. I’m a big vibe person when it comes to music so a song really has to make me feel a certain way in order for me to fall in love with it.” – Britney Spears

3. “I don’t want people kissing my butt. If I had a bad show and I know it, don’t tell me I had a good show. I hate that. I guess because I’m 17, people think I don’t see stuff like that.” – Britney Spears

5. “I go out with friends, but I don’t have time to get in trouble.” – Britney Spears

6. “I really love doing yoga. My main ritual is yoga. I do A LOT of yoga” – Britney Spears

7. “I would like to stop worrying so much because I worry all the time. And to learn how to be happier, just in general. I have to learn to take things not so seriously. And to stop biting my nails!… Recording music has helped take my mind off certain things. For me, my music is therapy.” – Britney Spears

10. “I just sing what I’m feeling at the time and hope my fans will like that and appreciate that.” – Britney Spears

11. “Christina Aguilera and I are friends no matter what the media makes up.” – Britney Spears

12. “I can’t go anywhere without someone judging me.” – Britney Spears

13. “I don’t understand the whole dating thing. I know right off the bat if I’m interested in someone, and I don’t want them to waste their money on me and take me out to eat if I know I’m not interested in that person.” – Britney Spears

15. “I have to live my life. I have a family and I just think it’s absurd to let other people influence the way you live.” – Britney Spears

16. “I notice that if there are some times I’ve been stressed because I’m human and stress about things, that affects your kids. So you have to make sure you’re a happy mom so they can be happy.” – Britney Spears

17. “With love, you should go ahead and take the risk of getting hurt because love is an amazing feeling.” – Britney Spears

19. “Onstage I’m the happiest person in the world.” – Britney Spears

20. “You can see the cruelest part of the world, the cruelest part. But then on the other side, you see the most beautiful part. Do you know? It’s like you go from one extreme to the next. And they’re both worth it because you wouldn’t see the one without the other one. But that cruel part is damn cruel and you’ll never forget it. But that heaven is heaven.” – Britney Spears

21. “I want to be an artist that everyone can relate to, that’s young, happy and fun.” – Britney Spears

23. “I don’t really have time to sit down and write. But when I think of a melody, I call up my answering machine and sing it, so I won’t forget it.” – Britney Spears

24. “I get to go to overseas places, like Canada.” – Britney Spears

25. “I have to feel connected before I record and the song has to spark something inside me. Very few songs do that. I guess it’s a good process because I love all of my music.” – Britney Spears

27. “Bottom line: If you love yourself, it will all work out.” – Britney Spears

28. “I’m not at the point where I’d feel safe in a house alone. I would be really scared. I’m the kind of person that when I get up to go use the bathroom I have this big long hallway, and I just know someone’s going to jump out and get me.” – Britney Spears

30. “I wish my hair was thicker, and I wish my feet were prettier. My toes are really ugly. I wish my ears were smaller. And my nose could be smaller too.” – Britney Spears 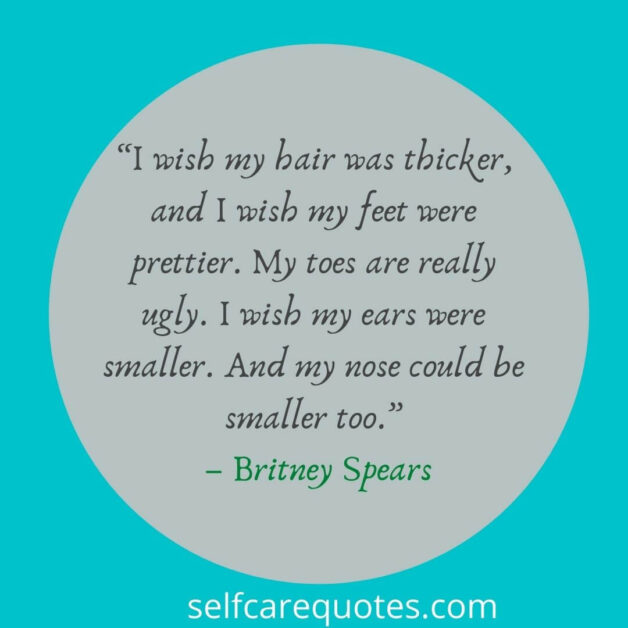 31. “Love is love! People should be able to do whatever makes them happy!” – Britney Spears

32. “I’m attracted to guys who are really confident and make conversation.” – Britney Spears

34. “I have always been heavily involved in every album I have ever made. I’m very stubborn when it comes to recording and will only record songs I love, which is why it takes me a long time to make an album.” – Britney Spears

35. “I have no regrets. I find everything happens for a reason and the reason why maybe this is happening is I won’t take BS from anyone. And I think it’s making me stand out on my own and be very independent and fight for what I believe in.” – Britney Spears

36. “Whereas before I was a young, blonde girl who would do what she was told. I know who I am as a person and I’m getting damn strong.” – Britney Spears

37. “I think it’s important to set up that boundary of respect for your kids at a young age, so they will know, I better listen to Mommy.” – Britney Spears

38. “When you’re comfortable with someone you love, the silence is the best.” – Britney Spears

39. “Justin Timberlake is everything, and what more could you want in a person? He’s funny. He’s cute. He’s great. He just understands. I get him and he gets me, and that’s cool.” – Britney Spears

40. “I like meeting all my fans and signing autographs, although it can all get a bit crazy. Yesterday, for example, a boy just came over and planted a big kiss on my face! I was like, Hello?” – Britney Spears 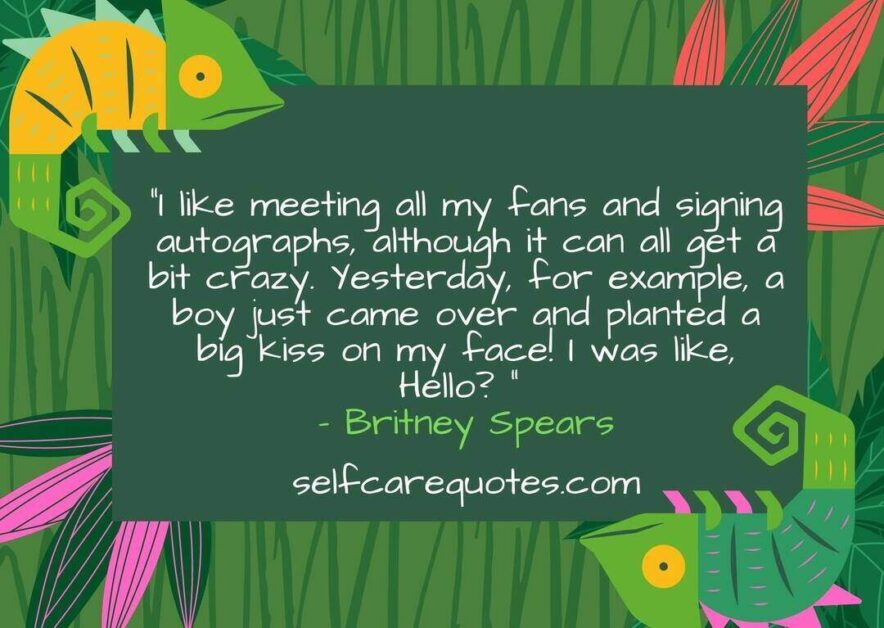 41. “As a mother, the one thing that always goes through your head is, You’re never enough. You never can be enough – or do enough – for your kids. It’s a never-ending issue for me.” – Britney Spears

43. “I did not have implants, I just had a growth spurt.” – Britney Spears

44. “I don’t want to pierce anything. I think it’s outdated. Belly rings and all are, like, old.” – Britney Spears

47. “I remember I read this harsh review about my show, and one of my friends told me that this was the exact same stuff people said about Madonna. And it’s like, she didn’t care. Madonna just came out and was herself. I respect that a lot.” – Britney Spears

48. “I would really, really, really like to be a legend like Madonna. Madonna knows what to do next, and when she’s performing, the audience is just in awe of her.” – Britney Spears

49.“England is one of my favorite places. The fans are just so crazy.” – Britney Spears

50. “Every night, I have to read a book, so that my mind will stop thinking about things that I stress about.” – Britney Spears

The birthplace of Britney Spears is Mississippi. She was born in 1981. Her father’s name is James Parnell Spears, and her mother’s name is Lynne Irene Bridges. When Britney was a child, she sang in a church. When she was three, she started to learn dancing. Britney first performed on the stage at the age of five. During childhood, she also took part in gymnastics. In childhood, Britney took part in different state-level competitions and won.

Britney Spears started her career with the Ruthless. We also find her on the popular TV show, ‘Star Search.’ At the age of eleven, Britney worked in The Mickey Mouse Club. In 1996, she was admitted into the school named Parklane Academy. Britney Spears recorded her vocals and went to New York for a better opportunity. The executives of the three labels rejected her. She got the opportunity from Jive Records.

Britney Spears’ first studio album was Baby One More Time. It was released in 1999. The album became very popular and proved as the bestselling album. All the songs of this album were popular, and this album brings immense success to Britney. In 2000, Britney’s second album, Oops!…. I Did It Again was released. It also brought her huge success.

We also find Britney Spears’ talent in writing. The name of her first book is Britney Spears’ Heart to Heart. Some of the popular songs of Britney Spears are, Baby One More Time, Oops!…. I Did It Again, Toxic, Womanizer, Criminal, If You Seek Army, Sometimes, Crazy, I’m a Slave 4 U, Circus, Everytime, Piece of Me, Pretty Girls, I Wanna Go, Lucky, Overprotected, Work Bitch, Boys, Till the World Ends, Born to Make You Happy, Me Against the Music, Break the Ice, Mood Ring, Radar and so on.

Britney Spears is a fantastic person. She makes her audiences and fans overwhelmed with her talent, skills, and excellent personality. Britney always does thing whatever she thinks comfortable for herself. About her dressing sense, habit, behavior, she does not bother about what people will think about her. Britney never tries to act like another person. She suggests people not worry about what people think about us. Instead, we should be true to ourselves.