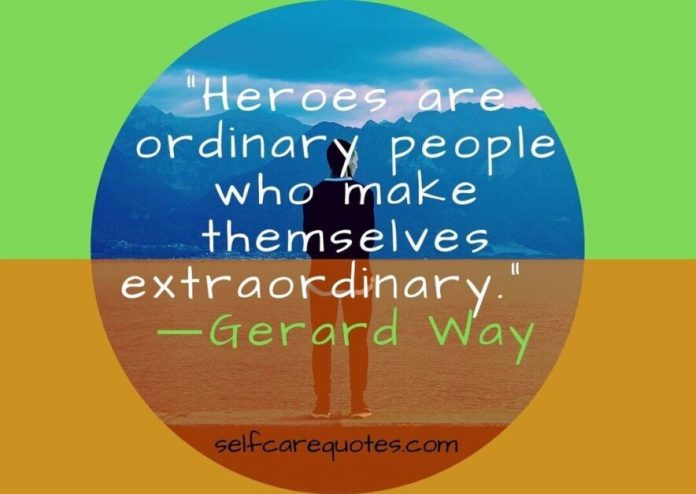 Gerard Way, an American musician, singer, songwriter, renowned for his contribution to the rock band named “My Chemical Romance.” We also know him as Gerard Arthur Way. He is the co-founder of this famous band and “Young Animal” imprint of DC comics. We also find him as the lead vocalist of this rock band. Gerard Way is also famous among his fans as a comic book writer. Gerard Way equally proved his talent both in music and in writing. He is equally popular as a writer.

The Umbrella Academy is the popular book series representing Gerard Way’s excellent writing talent. He also got the ‘Eisner Award’ as an acknowledgment of his excellence. His writing brilliance is reflected both in his books and songs. The Gerard Way quotes will also help you to be acquainted with his writing brilliance.

1. Heroes are ordinary people who make themselves extraordinary.  ―Gerard Way 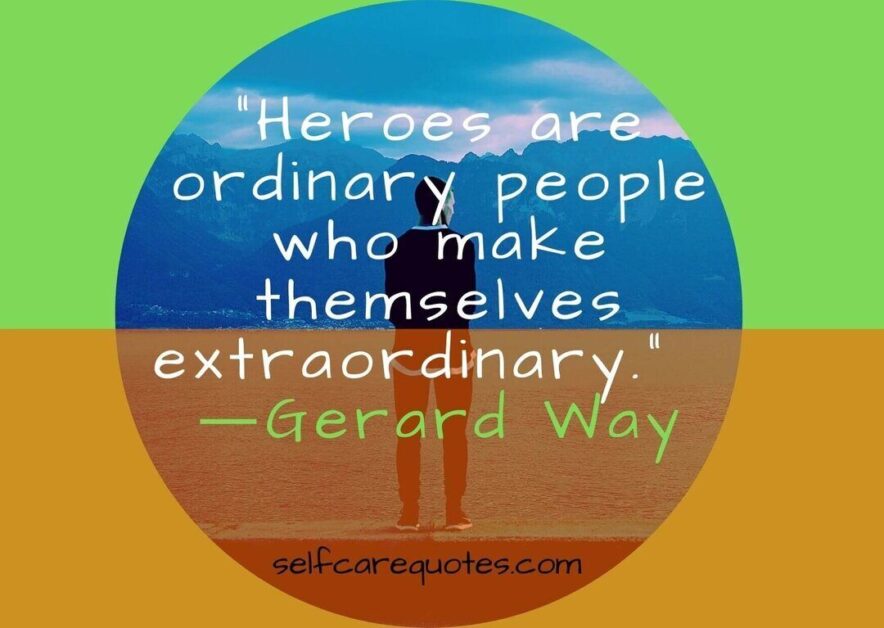 2. Life is very, very short, and you can choose to live it how you want. You can choose to dumb yourself down and not express yourself just so you can fit in, just so people won’t dislike you. ―Gerard Way

3. I want to be a vampire. They’re the coolest monsters. ―Gerard Way

4. I’m not psycho… I just like psychotic things. ―Gerard Way

5. Suicide is a serious thing. And if you know anyone who is suicidal, you need to get them help. No one should be in pain. Everyone should love themselves. ―Gerard Way

6. So many people treat you like you’re a kid so you might as well act like one and throw your television out of the hotel window. ―Gerard Way

7. I wasn’t bullied in high school, I was just ignored. ―Gerard Way

8. Remember the first time you went to a show and saw your favorite band. You wore their shirt, and sang every word. You didn’t know anything about scene politics, haircuts, or what was cool. All you knew was that this music made you feel different from anyone you shared a locker with. Someone finally understood you. This is what music is about. ―Gerard Way

10. People have evolved into something selfish, greedy and intolerant. People are unaccepting, because of religion, race, gender, sexual orientation… I’ve seen it in punk clubs, and I’ve seen it in the world.―Gerard Way

11. To me, nothing feels more like being dead than being in your 20s and having no direction in your life.―Gerard Way

12. My Chemical Romance is done. But it can never die.―Gerard Way

14. There’s not a lot of art forms where you can control your presentation and your ideas.―Gerard Way

15. There’s something very romantic about self-destruction and sabotaging your life, and taking a hammer to it.―Gerard Way

16. It is often my nature to be abstract, hidden in plain sight, or nowhere at all.―Gerard Way

17. The clearest actions come from truth, not obligation.―Gerard Way

18. There was a moment in my life when I really wanted to kill myself. And there was one other moment when I was close to that. But even in my most jaded times, I had some hope. ―Gerard Way

19. The only thing I learnt in high school is that people are very violent and territorial.―Gerard Way

20. What I like about The Sims is that I don’t have a normal life at all, so I play this game where these people have these really boring, mundane lives. It’s fun.―Gerard Way

21. You can’t be two people in your brain, one rock dude and a dad – there’s something in the middle of them, and that’s really what you are and that’s going to make you the best dad – not when you try to be one or the other.―Gerard Way

22. The thing about ‘Watchmen’ that people should know is that when it came out there was absolutely nothing like it. Up until then, comics were about the same thing: a guy in tights fighting another guy in tights and saving the girl – that was it.―Gerard Way

23. The thing about ‘Watchmen’ that people should know is that when it came out there was absolutely nothing like it. Up until then, comics were about the same thing: a guy in tights fighting another guy in tights and saving the girl – that was it.―Gerard Way

24. ‘The Black Parade’ is an epic, theatrical, orchestral, big record that is also a concept album.―Gerard Way

25. I love watching ‘Twilight Zone.’ New Year’s Eve they do the marathon; I watch it every year.―Gerard Way

26. ‘Watchmen’ is a politically charged story, and it explores exactly what a hero is, how the world would treat them and how they would react. It was the first time I read a superhero story that explored that situation. These are very real people with very real problems.―Gerard Way

27. I had a couple of really cool friends when I was a kid, and we’d find cool music and movies and show them to each other. My friend Dennis had a copy of ‘A Clockwork Orange’ and he’d already seen it once, and he was like, ‘We need to watch this.’ I was sleeping over his house – and I think we were literally 15 – and we watched it.―Gerard Way

28. I thought ‘Eternal Sunshine of the Spotless Mind’ was so interesting the way it was made and the texture of it.―Gerard Way

30. You should love yourself.―Gerard Way

31. To me, the coolest, shiniest, sexiest, darkest, scariest thing you can be is pop.―Gerard Way

32. I don’t think having a My Chemical Romance action figure will make a kid start his own band, I like to think it will make him save children from a burning building.―Gerard Way

33. My favorite two festivals have always been the Big Day Out and SummerSonic in Japan. Big Day Out is a little more fun because it lasts longer. It’s like an abbreviated version of the Warped tour because you get to play with the same people every day, which is really fun.―Gerard Way

35. I’d rather be a creature of the night than an old dude.―Gerard Way

37. A lot of kids get disappointed. They expect me to be, like, ‘Bwaah.’ ‘If I spend a minute with them, they end up saying, ‘Wow, you’re a nice, normal guy.’ They hate it when they catch me out of my makeup.―Gerard Way

38. Comics are my first love, and I hate seeing an art form that I love suffer.―Gerard Way

40. I understand that kids look up to me, that some people might have gotten sober because of me.―Gerard Way

41. All of my favorite albums have this incredible amount of conceptual glue to them, even if they are not telling a story. ―Gerard Way

44. ‘Watchmen’ is not only the greatest comic ever written, it’s a really important work of fiction.―Gerard Way

45. I’ve always had bizarre, negative feelings about anything traditional, like marriage and family. I never thought something like that worked.―Gerard Way

46. I’ve always seen My Chemical Romance as the band that would have represented who I and my friends were in high school, and the band that we didn’t have to represent us – the kids that wore black – back then.―Gerard Way

47. My music is – I don’t want to say my main focus, but it’s what comes most naturally to me.―Gerard Way

48. Freddie Mercury, to me, was probably the most important frontman to me growing up.―Gerard Way

49. I wouldn’t have been able to move to L.A. if I felt I was going to lose my identity as a New Jerseyian. My accent has gotten thicker since I’ve lived here.―Gerard Way

50. You put an old Misfits record on, and it sounds like it came out yesterday.―Gerard Way

My wife totally backs the way I am on stage; that’s one of the amazing things about her. I have 120 percent respect for her when I’m on stage, so there are definitely certain things I would never do. ―Gerard Way

My parents didn’t have records, they didn’t have radios, and they didn’t listen to music. My grandmother was my main connection to art and music. She could play piano very well, and she had perfect pitch. ―Gerard Way

It was harder to break into comics than it was to become a singer in a rock band. ―Gerard Way

I do enjoy manga but would not consider myself a ‘super-fan,’ only really connecting with certain works such as ‘Lone Wolf and Cub,’ or ‘Tekkon Kinkreet,’ the more breakthrough works, and ‘Akira,’ to me, is the daddy of them all.―Gerard Way

Gerard Way showed his interest in music in his childhood. During his school life, he started to sing publicly. We may see his first appearance while he was performing the role of Peter Pan. The credit for his successful performance of such a young age goes to his grandmother.

Gerard Way’s first and initial teacher was his grandmother, whose name is Elena Lee Rush. He learned painting and singing. She also taught him how to perform adequately. Gerard Way acknowledges her grandmother’s contribution to his skills.

Gerard Way studied in Elementary School. Later he was admitted to Belleville High School. He completed his graduation from this school in 1995. In his school life, he wanted to build his career in the comic book industry. In New York, he was admitted to the School of Visual Arts. He graduated from this institute in 1999.

The career of Gerard Way:

At the beginning phase of the career, we find Gerard Way wanted to be a guitarist. He tried but failed to start his career as a guitarist. We find him working in the Cartoon Network. The difficulties emotionally broke him down. But he never loses hope; instead, he proved his pain as the fuel of his strength.

At this time, he wrote the song “Skylines and Turnstiles” with his full emotion. It is the first song of his renowned rock band “My Chemical Romance.” Some famous works of Gerard Way are Na Na Na, I Don’t Love You, Helena, Mama, I’m Not Okay, Famous Last Words, No Shows, The Ghost of You, This is how I Disappeared, Cancer, Thank You for the Venom, Brother, Pointing In It, The Kids From Yesterday, My Action Cat, and so on.

If we look over the life story of Gerard Way, we may observe that, from an early age, he was focused on his interest. He also chose his education according to his interest. He was interested in arts from his childhood. Later we find him admitting to the School of Visual Arts and graduating with “Bachelor of Fine Arts.”

Like Gerard Way, we should also be focused on our interests. We may also observe that he faced with failure at the beginning phase of his career. But he never stopped. We should also build the courage within ourselves to face the difficulties of our life. We should grow the strength to overcome the hindrance of our life.