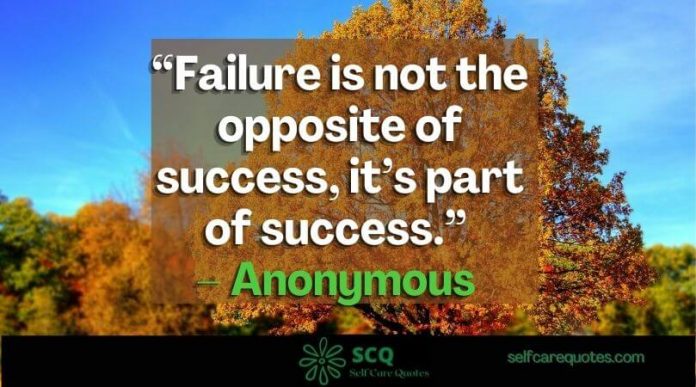 I am a firm believer that there is a solution to every problem. You just have to keep trying.

It is easy to be discouraged when something doesn’t work out, but if you do not give up, you will eventually find the solution.

You might feel like giving up when things don’t go your way. But I often tell myself “get up and try again. It’s going to get better.” The key is to approach it with patience. If you wait until everything is perfect, you’ll never start anything.

40 Get Up and Try Again Quotes

1. “Failure is not the opposite of success, it’s part of success.” – Anonymous

3. “When you fall, leap to your feet and try again.” – Nadia Comaneci

4. “Mistakes in life teach you how to succeed because you want to try again and do it better.” – Carolina Herrera

5. “The successful man will profit from his mistakes and try again in a different way.” – Dale Carnegie

7. “Develop success from failures. Discouragement and failure are two of the surest stepping stones to success.” – Dale Carnegie

8. “When you lose, you get up, you make it better, you TRY AGAIN.” – Serena Williams

9. “Good things don’t happen by coincidence. Every dream carries with it certain risks, especially the risk of failure. But I am not stopped by risks. Supposed a great person takes the risk and fails. Then the person must try again. You cannot fail forever. If you try ten times, you have a better chance of making it on the eleventh try than if you didn’t try at all.” – Arnold Schwarzenegger 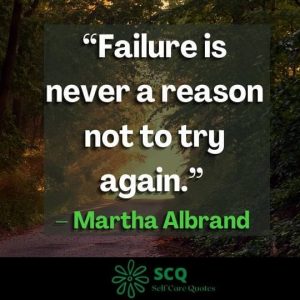 10. “Failure is never a reason not to try again.” – Martha Albrand

12. “If we fail, let us try again and again until we succeed.” – Joseph Chamberlain

14. “If at first you don’t succeed-try, try again. Don’t think of it as failure. Think of it as timed-release success.” – Robert Orben

15. “Like success, failure is many things to many people. With Positive Mental Attitude, failure is a learning experience, a rung on the ladder, a plateau at which to get your thoughts in order and prepare to try again.” – W. Clement Stone

16. “The only people who never tumble are those who never mount the high wire.” – Oprah Winfrey

19. “You learn nothing form your successes except to think too much of yourself. It is from failure that all growth comes, provided you can recognize it, admit it, learn from it, rise above it, and then try again.” – Dee Hock

20. “Getting Back Up is hard when you talk yourself down. Frustration towards yourself, feeds itself. Use uplifting words to motivate yourself.” – Unknown

21. “Getting up just one more time than the number of times you fell down.” – Unknown 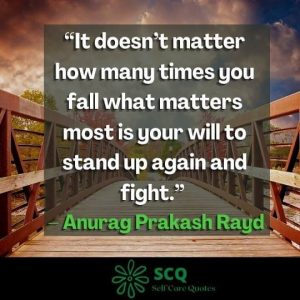 22. “It doesn’t matter how many times you fall what matters most is your will to stand up again and fight.” – Anurag Prakash Ray

26. “Do the one thing you think you cannot do. Fail at it. Try again. Do better the second time. The only people who never tumble are those who never mount the high wire. This is your moment. Own it.” – Oprah Winfrey

27. “There is no thing as failure, only learning experiences.” – Anonymous

28. “Failure is the condiment that gives success its flavor.” – Truman Capote

29. “It’s failure that gives you the proper perspective on success.” – Ellen DeGeneres

31. “I can accept failure, everyone fails at something. But I can’t accept not trying.” – Michael Jordan

33. “You may fail once or twice but get up and step forward. You may attain success as long as you get up and try it all over again.” – Unknown

34. “When you stumble, stand for you can not learn if you do not arise.” – Innah Delos Angeles

35. “In adversity, a strong person cries and be upset for a moment but then gets up with determination to fight.” – Anil Sinha

36. “There is no innovation and creativity without failure. Period.” – Brene Brown 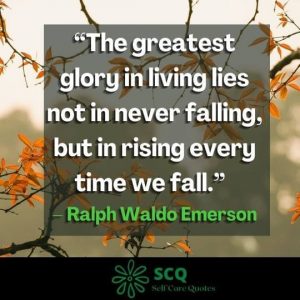 37. “The greatest glory in living lies not in never falling, but in rising every time we fall.” – Ralph Waldo Emerson

38. “When everything seems to be going against you remember that an airplane takes off against the wind, not with it.” – Henry Ford

39. “We’re born with success. It is only others who point out our failures, and what they attribute to us as failure.” – Whoopi Goldberg 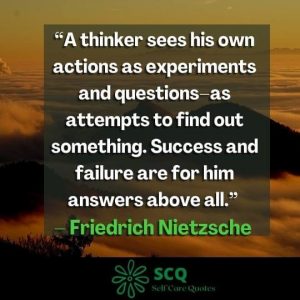 40. “A thinker sees his own actions as experiments and questions–as attempts to find out something. Success and failure are for him answers above all.” – Friedrich Nietzsche

In conclusion, if you feel like giving up, think back to all the work you have done in the past. Imagine how far you have come and how hard it would be to get back where you are now. Get up and try again.
If you don’t believe in yourself, no one will.