1. “The revolution has always been in the hands of the young. The young always inherit the revolution.” ―Huey Newton 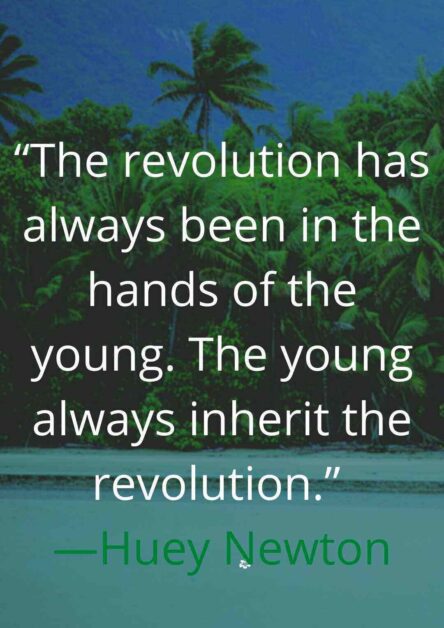 2. “Black Power is giving power to people who have not had power to determine their destiny.”―Huey Newton

3. “You can jail a Revolutionary, but you can’t jail the Revolution.”―Huey Newton

4. “You can kill my body, and you can take my life but you can never kill my soul. My soul will live forever!”―Huey Newton

5. “The racist dog policemen must withdraw immediately from our communities, cease their wanton murder and brutality and torture of black people, or face the wrath of the armed people.”―Huey Newton

6. “Black men and women who refuse to live under oppression are dangerous to white society because they become symbols of hope to their brothers and sisters, inspiring them to follow their example.”―Huey Newton

7. “Any unarmed people are slaves, or are subject to slavery at any given moment.”―Huey Newton

8. “I do not expect the white media to create positive black male images.”―Huey Newton

10. “Power is the ability to define phenomena, and make it act in a desired manner.”―Huey Newton

11. “The first lesson a revolutionary must learn is that he is a doomed man.”―Huey Newton

12. “I think what motivates people is not great hate, but great love for other people.”―Huey Newton

13. “Institutions work this way. A son is murdered by the police, and nothing is done. The institutions send the victim’s family on a merry-go-round, going from one agency to another, until they wear out and give up. this is a very effective way to beat down poor and oppressed people, who do not have the time to prosecute their cases. Time is money to poor people. To go to Sacramento means loss of a day’s pay – often a loss of job. If this is a democracy, obviously it is a bourgeois democracy limited to the middle and upper classes. Only they can afford to participate in it.”―Huey Newton

14. “Youths are passed through schools that don’t teach, then forced to search for jobs that don’t exist and finally left stranded in the street to stare at the glamorous lives advertised around them.”―Huey Newton

15. “If you stop struggling, then you stop life.”―Huey Newton

16. “My fear was not of death itself, but a death without meaning.”―Huey Newton

17. “There’s no reason for the establishment to fear me. But it has every right to fear the people collectively – I am one with the people.”―Huey Newton

18. “I have the people behind me and the people are my strength.”―Huey Newton

19. “We have two evils to fight, capitalism and racism. We must destroy both racism and capitalism.”―Huey Newton

20. “The walls, the bars, the guns and the guards can never encircle or hold down the idea of the people.”―Huey Newton

21. “The policemen or soldiers are only a gun in the establishments hand. They make the racist secure in his racism.”―Huey Newton

22. “Sometimes if you want to get rid of the gun, you have to pick the gun up.”―Huey Newton

23. “There will be no prison which can hold our movement down.”―Huey Newton

25. “We have to realize our black heritage in order to give us strength to move on and progress. But as far as returning to the old African culture, it’s unnecessary and it’s not advantageous in many respects. We believe that culture itself will not liberate us. We’re going to need some stronger stuff.”―Huey Newton

26. “But before we die, how shall we live? I say with hope and dignity; and if premature death is the result, that death has a meaning reactionary suicide can never have. It is the price of self-respect.”―Huey Newton

27. “Too many so-called leaders of the movement have been made into celebrities and their revolutionary fervor destroyed by mass media. They become Hollywood objects and lose identification with the real issues. The task is to transform society; only the people can do that”―Huey Newton

28. “We [Panthers] have not said much about the homosexual at all, but we must relate to the homosexual movement because it is a real thing. And I know through reading, and through my life experience and observations that homosexuals are not given freedom and liberty by anyone in the society. They might be the most oppressed people in the society.”―Huey Newton

29. “The nature of a panther is that he never attacks. But if anyone attacks or backs into a corner, the panther comes up to wipe that aggressor or that attacker out.”―Huey Newton

30. “You can only die once, so do not die a thousand times worrying about it.”―Huey Newton

31. “IQ tests are routinely used as weapons against Black people in particular and minority groups and poor people generally. The tests are based on white middle-class standards, and when we score low on them, the results are used to justify the prejudice that we are inferior and unintelligent. Since we are taught to believe that the tests are infallible, they have become a self-fulfilling prophecy that cuts off our initiative and brainwashes us.”―Huey Newton

32. “When you deal with a man, deal with his most valuable possession, his life. There’s play and there’s the deep flow. I like to take things to the deep flow of play, because everything is a game, serious and nonserious at the same time. So play life like it’s a game.”―Huey Newton

33. “We were trying to increase the conflict that was already happening… we felt that we would take the conflict to so high a level that some change had to come.”―Huey Newton

37. “By surrendering my life to the revolution, I found eternal life”―Huey Newton

38. “My fear was not of death itself, but a death without meaning. I wanted my death to be something the people could relate to, a basis for further mobilization of the community.”―Huey Newton

39. “Any unarmed people are slaves, or are subject to slavery at any given moment. If the guns are taken out of the hands of the people and only the pigs have guns, then it’s off to the concentration camps, the gas chambers, or whatever the fascists in America come up with. One of the democratic rights of the United States, the Second Amendment to the Constitution, gives the people the right to bear arms. However, there is a greater right; the right of human dignity that gives all men the right to defend themselves.”―Huey Newton

40. “Those in the community who defy authority and ‘break the law’ seem to enjoy the good life and have everything in the way of material possessions. On the other hand, people who work hard and struggle and suffer much are the victims of greed and indifference, losers. This insane reversal of values presses heavily on the Black community. The causes originate from outside and are imposed by a system that ruthlessly seeks its own rewards, no matter what the cost in wrecked human lives.”―Huey Newton

41. “We felt that the police needed a label, a label other than that fear image that they carried in the community. So we used the pig as the rather low-lifed animal in order to identify the police. And it worked.”―Huey Newton

42. “During those long years in Oakland public schools, I did not have one teacher who taught me anything relevant to my own life or experience. Not one instructor ever awoke in me a desire to learn more or to question or to explore the worlds of literature, science, and history. All they did was try to rob me of the sense of my own uniqueness and worth, and in the process nearly killed my urge to inquire.”―Huey Newton

43. “I expected to die. At no time before the trial did I expect to escape with my life. Yet being executed in the gas chamber did not necessarily mean defeat. It could be one more step to bring the community to a higher level of consciousness.”―Huey Newton

45. “White America has seen to it that Black history has been suppressed in schools and in American history books. The bravery of hundreds of our ancestors who took part in slave rebellions has been lost in the mists of time, since plantation owners did their best to prevent any written accounts of uprisings.”―Huey Newton

Who was Huey Percy Newton?

Huey Percy Newton is shortly known as Huey P. Newton. He is an Afro-American social worker. He along with his college fellow founded “The Black Panther Party”. This is a socio-political organization to help and promote the black people of the USA. We can call him a human rights activist. He worked for the black community. He introduced many social works for the well being of human beings. He is not known for his good deeds; He was convicted for killing a police officer by shooting in a public place. For this he was prisoned for 15 years but later the punishment reduced. Huey Percy Newton has a huge number of quotes. As a socio-political person he sometimes uses these quotes as an instrument to motivate his followers. Huey Newton’s quotes are still famous.

Huey Newton was one of the most spirited when he was a child. His childhood was full of hardships. And all the hardships came on him for being Black. Once he said, “I am ashamed of being Black”. So we get a clear idea about the struggle in his childhood he did. He was born on February 17, 1942. His birthplace is Monroe, Louisiana, U.S. He was the youngest child of his family. His parents are Armelia Johnson and Walter Newton. Monroe is a place where black people killing was a regular routine for whites. For this reason, they left this place very soon. In the early life Huey Newton was involved in crime.

Huey Newton completed his secondary education from San Francisco Law School. He took his graduation from the University of California at Santa Cruz. This did not end; He completed his PhD from Santa Cruz. His PhD topic was social philosophy. Bearing social responsibility needs some educational background, this particular thing is shown by Huey Newton.

Politics cannot be a profession. That means Huey Newton had no profession. He just worked for his community. In his political career he founded Black Panther Party. He took 60 programs for black people. Among his programs he provided legal advice seminars, medical clinics, food banks for poor people, clothing banks, ambulance service etc. All these programs were free of cost.

This revolutionary person died at the age of 47 on 22 August 1989 in California.

As we know that Blacks are not well treated in American white society. This racial discrimanation was much sevier in the time of Huey Newton. To save the community from any kind of injustice Huey Newton came forward. This is a great teaching of him for human beings. We should follow Huey Newton for many other reasons. He introduced free breakfast for improvised children’s every day. Besides this, he took 60 community help programs for these black people. We have to follow all the good sides which are really abundant in him. But we have to avoid his bad sides.