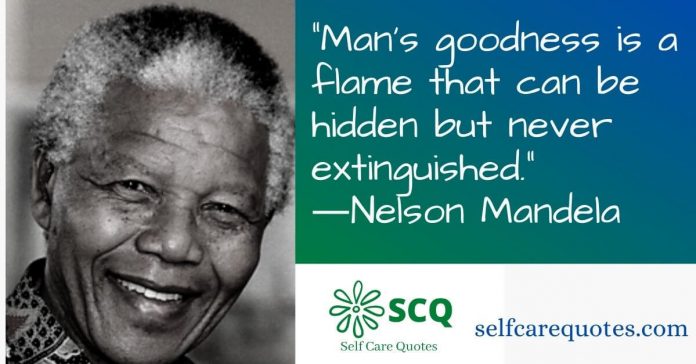 Who was Nelson Mandela?

The most famous Nigro person in this world of all time may be Nelson Mandela. He was the first South African black president who was elected by direct vote of citizens.

Nelson Mandela won the Nobel prize for peace. This great leader of South Africa was not only a president of that country but also he was a social worker. The great achievement of this great person was his non-violation movement and winning of the heart of all people.

Nelson Mandela has a huge number of quotes that can change someone’s life. Nelson Mandela’s quotes are universal. People all over the world love his quotes even after his death.

1. Man’s goodness is a flame that can be hidden but never extinguished. ―Nelson Mandela 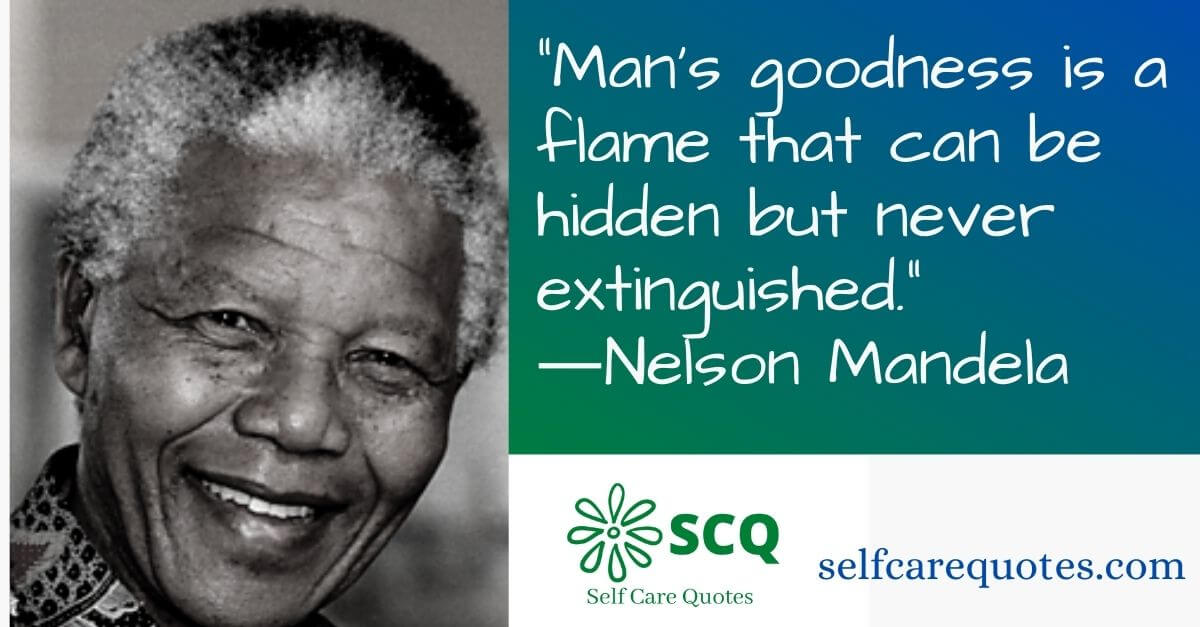 2. A winner is a dreamer who never gives up. ―Nelson Mandela

3. Education is the most powerful weapon which you can use to change the world.―Nelson Mandela

4. I learned that courage was not the absence of fear, but the triumph over it. The brave man is not he who does not feel afraid, but he who conquers that fear.―Nelson Mandela

5. Live life as though nobody is watching, and express yourself as though everyone is listening.―Nelson Mandela

7. One of the most difficult things is not to change society — but to change yourself.―Nelson Mandela

8. As we are liberated from our own fear, our presence automatically liberates others.―Nelson Mandela

9. Difficulties break some men but make others. No axe is sharp enough to cut the soul of a sinner who keeps on trying, one armed with the hope that he will rise even in the end.―Nelson Mandela

10. Everyone can rise above their circumstances and achieve success if they are dedicated to and passionate about what they do.―Nelson Mandela

11. To be free is not merely to cast off one’s chains, but to live in a way that respects and enhances the freedom of others.―Nelson Mandela

12. Do not judge me by my successes, judge me by how many times I fell down and got back up again.―Nelson Mandela

14. Part of being optimistic is keeping one’s head pointed toward the sun, one’s feet moving forward. There were many dark moments when my faith in humanity was sorely tested, but I would not and could not give myself up to despair. That way lays defeat and death.―Nelson Mandela

16. There is no passion to be found playing small – in settling for a life that is less than the one you are capable of living.―Nelson Mandela

17. We must use time wisely and forever realize that the time is always ripe to do right.―Nelson Mandela

18. No one is born hating another person because of the color of his skin, or his background, or his religion. People must learn to hate, and if they can learn to hate, they can be taught to love, for love comes more naturally to the human heart than its opposite.―Nelson Mandela

19. Resentment is like drinking poison and then hoping it will kill your enemies.―Nelson Mandela

20. When people are determined they can overcome anything.―Nelson Mandela

21. What counts in life is not the mere fact that we have lived. It is what difference we have made to the lives of others that will determine the significance of the life we lead.―Nelson Mandela

22. I never lose. I either win or learn.―Nelson Mandela

23. Your playing small does not serve the world. Who are you not to be great?―Nelson Mandela

24. Forgiveness liberates the soul. It removes fear. That is why it is such a powerful weapon.―Nelson Mandela

25. There can be no greater gift than that of giving one’s time and energy to help others without expecting anything in return.―Nelson Mandela

26. It is what we make out of what we have, not what we are given, that separates one person from another.―Nelson Mandela

27. Lead from the back — and let others believe they are in front.―Nelson Mandela

29. You can start changing our world for the better daily, no matter how small the action.―Nelson Mandela

30. As we let our own light shine, we unconsciously give other people permission to do the same.―Nelson Mandela

31. May your choices reflect your hopes, not your fears.―Nelson Mandela

32. The greatest glory in living is not in falling, but in rising every time we fall.―Nelson Mandela

33. Courageous people do not fear forgiving, for the sake of peace.―Nelson Mandela

34. While poverty persists, there is no true freedom―Nelson Mandela

35. After climbing a great hill. One only finds that there are many more hills to climb.―Nelson Mandela

36. I am the master of my fate: I am the captain of my soul.―Nelson Mandela

38. Real leaders must be ready to sacrifice all for the freedom of their people.―Nelson Mandela

39. Action without vision is only passing time, vision without action is merely day dreaming, but vision with action can change the world.―Nelson Mandela

40. Sometimes, it falls upon a generation to be great. You can be that great generation. Let your greatness blossom.―Nelson Mandela

41. Poverty is not an accident. Like slavery and apartheid, it is man-made and can be removed by the actions of human beings.―Nelson Mandela

42. When a man is denied the right to live the life he believes in, he has no choice but to become an outlaw.―Nelson Mandela

43. If you want the cooperation of humans around you, you must make them feel they are important, and you do that by being genuine and humble.―Nelson Mandela

44. People respond in accordance to how you treat them.―Nelson Mandela

45. “I like friends who have independent minds because they tend to make you see problems from all angles.”―Nelson Mandela

46. To deny people their human rights is to challenge their very humanity.―Nelson Mandela

48. When the water starts boiling it is foolish to turn off the heat.―Nelson Mandela

49. I should tie myself to no particular system of society other than of socialism.―Nelson Mandela

50. A good head and a good heart are always a formidable combination.―Nelson Mandela

The early life of Nelson Mandela was not so great as his later life. He was born in the royal family of the village of Mvezo in Umtata. His birth year was 18 July 1918. He was the first member of his family who studied.

When he was 9 years old, his father died. Mandela said that the death was for TB. Nelson Mandela achieved an uncompromising nature from his father. The local customs and rituals had a great influence on child Nelson Mandela.

Nelson Mandela’s education life was long. In childhood, he studied in his locality. His early education was based on the local culture. His school name was Clarkebury Boarding Institute and  Wesleyan School.

A politician does not have any profession. In the case of Nelson Mandela, this is true. He was not a professional politician. He just worked as a social worker and tried to free the black people from slavery. But in the profession, we can say him a lawyer.

He worked in Johannesburg as a lawyer. He is a social worker and in later life, he was the president of South Africa. Nelson Mandela also wrote a number of books. His Autobiography “The Long Walk For Freedom”. This is his best book.

Whenever you read the detailed biography of this great person you will be astonished to see his struggle and determination. This great leader is not only the life-changer of Black people but also he changed the whole of South Africa. He is still changing the life of huge people by his universal quotes and sayings.

This great leader has a great personality. In his personality, one can find huge quality aspects which can be followed. The tolerance Mandela taught us was master class. He spent a lot of years in jail but he was not revengeful to the white people.

He had to suffer unbearable oppression but he was unmoved from his dream. He loved peace, unity, pardon, equality, and everything which is good. For all these good qualities we can follow him. If any person can follow Nelson Mandela very closely he will be a great person in the future.