Who is Sidney Poitier? 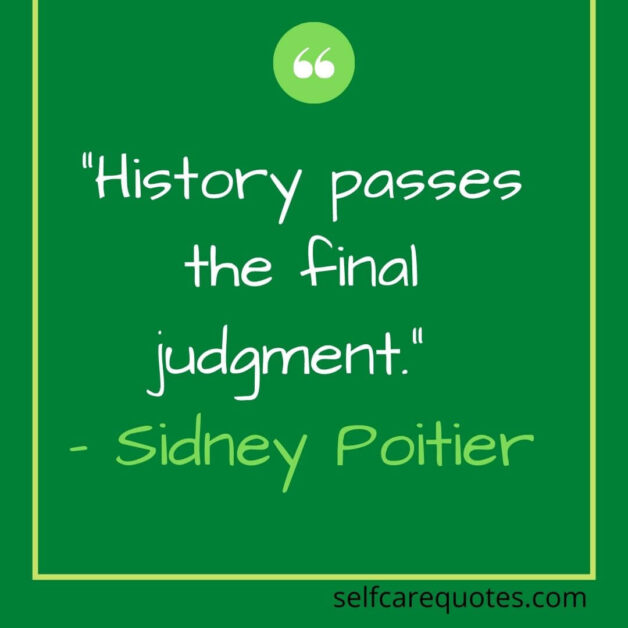 2. “I feel, internally, that I am an ordinary person who has had an extraordinary life.” – Sidney Poitier

3. “So much of life, it seems to me, is determined by pure randomness.” – Sidney Poitier

6. “In America, it is difficult to be your own man.” – Sidney Poitier

7. “I have always been a learner because I knew nothing.” – Sidney Poitier

8. “Far as I can tell, I still have most of my hair, my gut is not hanging over my belt, and I still have all of my teeth.” – Sidney Poitier

9. “Generally, I tend to despise human behavior rather than human creatures.” – Sidney Poitier

10. “I know how easy it is for one to stay well within moral, ethical, and legal bounds through the skillful use of words – and to thereby spin, sidestep, circumvent, or bend a truth completely out of shape. To that extent, we are all liars on numerous occasions.” – Sidney Poitier

11. “I wouldn’t change a single thing, because one change alters every moment that follows it.” – Sidney Poitier

12. “I cannot be understood in three minutes.” – Sidney Poitier

14. “I learned to hear silence. That’s the kind of life I lived: simple. I learned to see things in people around me, in my mom, dad, brothers and sisters.” – Sidney Poitier

15. “If I’m remembered for having done a few good things, and if my presence here has sparked some good energies, that’s plenty.” – Sidney Poitier

16. “I want my great-granddaughter to have a fairly good understanding of the world in which I lived for 81 years and also the world before I came into it – all the way back a hundred thousand years, to the beginning of our species.” – Sidney Poitier

17. “In my case, the body of work stands for itself…I think my work has been representative of me as a man.” – Sidney Poitier

18. “I always wanted to be someone better the next day than I was the day before.” – Sidney Poitier

19. “I wanted to explore the values that are at work, underpinning my life.” – Sidney Poitier

20. “I always had the ability to say no. That’s how I called my own shots.” – Sidney Poitier

21. “I was not the kind of a principal player that was so in demand that eight or 10 or 12 scripts came per month.” – Sidney Poitier

22. “I had chosen to use my work as a reflection of my values.” – Sidney Poitier

24. “If you apply reason and logic to this career of mine, you’re not going to get very far. You simply won’t.” – Sidney Poitier

25. “When I set out to become an actor, I had set myself a standard.” – Sidney Poitier

26. “I had to satisfy the action fans, the romantic fans, the intellectual fans. It was a terrific burden.” – Sidney Poitier

27. “I did not go into the film business to be symbolized as someone else’s vision of me.” – Sidney Poitier

31. “I come from a great family. I’ve seen family life and I know how wonderful, how nurturing, and how wonderful it can be.” – Sidney Poitier

32. “My father was a poor man, very poor in a British colonial possession where class and race were very important.” – Sidney Poitier

33. “I am not a hugely religious person, but I believe that there is a oneness with everything. And because there is this oneness, it is possible that my mother is the principal reason for my life.” – Sidney Poitier

34. “I was a gift to my mother. She was a remarkable person. God or nature, or whatever those forces are, smiled on her, then passed me the best of her.” – Sidney Poitier

35. “But my dad also was a remarkable man, a good person, a principled individual, a man of integrity.” – Sidney Poitier

36. “My mother was the most amazing person. She taught me to be kind to other women. She believed in family. She was with my father from the first day they met. All that I am, she taught me.” – Sidney Poitier

37. “My father was a tomato farmer. There is the phrase that says he or she worked their fingers to the bone, well, that’s my dad. And he was a very good man.” – Sidney Poitier

38. “I was born two months early, and everyone had given up on me. But my mother insisted on my life.” – Sidney Poitier

39. “My father was the quintessential husband and dad.” – Sidney Poitier

40. “My father was very big on marriage.” – Sidney Poitier

42. “My father was a certain kind of man – I saw how he treated my mother and his family and how he treated strangers. And I vowed I would never make a film that would not reflect properly on my father’s name.” – Sidney Poitier

43. “I was the only Black person on the set. It was unusual for me to be in a circumstance in which every move I made was tantamount to a representation of 18 million people.” – Sidney Poitier

44. “I never had an occasion to question color, therefore, I only saw myself as what I was… a human being.” – Sidney Poitier

45. “The impact of the black audience is expressing itself. They look to films to be more expressive of their needs, their lives. Hollywood has gotten that message – finally.” – Sidney Poitier

46. “I didn’t run into racism until we moved to Nassau when I was ten and a half, but it was vastly different from the kind of horrendous oppression that black people in Miami were under when I moved there at 15. I found Florida an antihuman place.” – Sidney Poitier

47. “There is no racial or ethnic domination of hopelessness. It’s everywhere.” – Sidney Poitier

48. “I knew what it was to be uncomfortable in a movie theater watching unfolding on the screen images of myself – not me, but black people – that were uncomfortable.” – Sidney Poitier

49. “I couldn’t adjust to the racism in Florida. It was so blatant… I had never been so described as Florida described me.” – Sidney Poitier

50. “I was fortunate enough to have been raised to a certain point before I got into the race thing. I had other views of what a human is, so I was never able to see racism as the big question. Racism was horrendous, but there were other aspects to life.” – Sidney Poitier

Sidney Poitier had no institutional education. He learned reading newspapers from one of his co-workers at a restaurant. His later education was only related to film and media. He entered to  North American Negro Theatre to learn film making and other rules. He completed his other film-related study from Actors Studio. We can say that he is a practical learner. The total of his learning is practical experience-based.

The early life of this actor was so miserable. For this reason, he worked in a restaurant as a plate cleaner. After this, he started a job in the army reducing his age. He had to work in Veteran’s Administration hospital.  But he did not get mental satisfaction there. He left this job and started acting. This was a life-changing move for Sidney Poitier. He acted and directed different famous movies. Some of his movies are still famous.

Finally, we can say that Sidney Poitier is an idol for his community and other people. He is a person who is loved by huge people. Sidney Poitier’s quotes are also much famous.

The actor has a varied life. Though he is an American citizen, he spent most of his life’s most part in the Bahamas. His lifestyle is much simpler. Even after being a famous person, he did not change his lifestyle. We can learn simplicity from him. His acting quality is also impressive. Anyone who wants to be an actor can follow him. Sidney Poitier’s quotes are realistic and life’s problem-solving. We can follow him for his famous quotes. Sidney Poitier is a black person from the 1930s.  The life of a black child was not easy then. Sidney Poitier also had to face huge obstacles in his life for being a black person. But Sidney Poitier did not leave trying. He tried and now he is getting the result. People can follow him for these quotes.