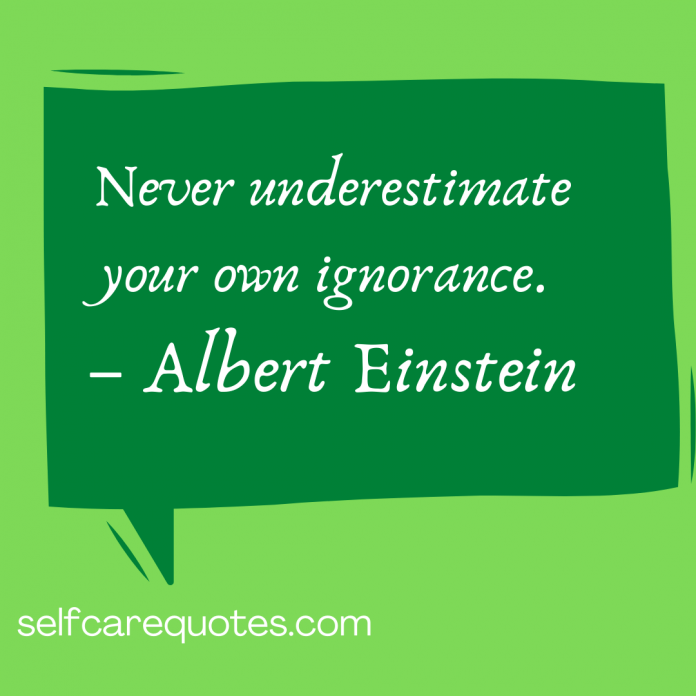 Every person wants to love, priority, and care from their near ones. We create some expectations from our family members, friends, and our lovers and beloveds. It is the common tendency of the human being. Being an emotional creature, we cannot tolerate the negligence of the person to whom we love. 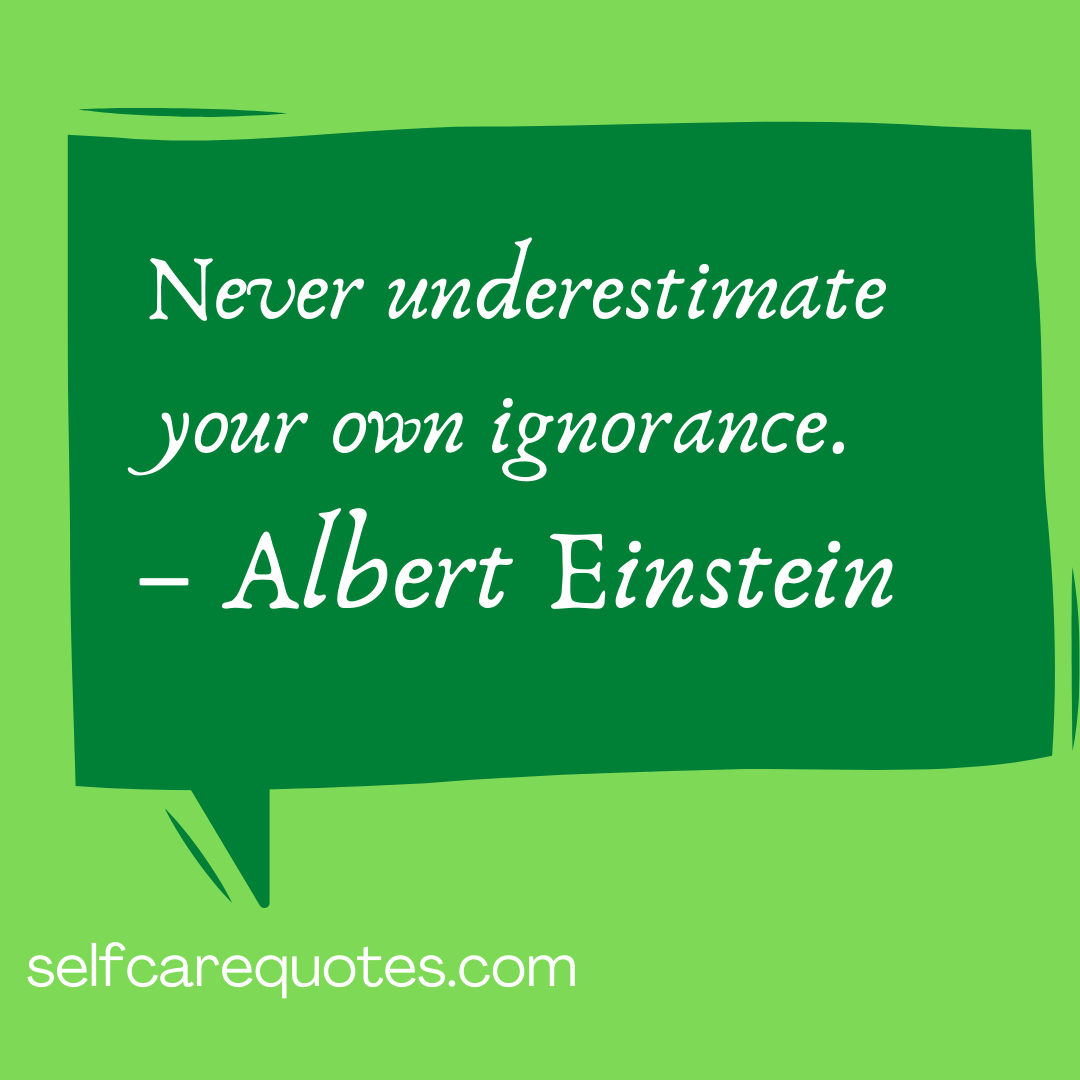 2. “Ignorance is the night of the mind, but a night without moon or star.” – Confucius

4. “I know nothing except the fact of my ignorance.” – Socrates

5. “All you need in this life is ignorance and confidence, and then success is sure.” – Mark Twain

6. “A person must have a certain amount of intelligent ignorance to get anywhere.” – Charles Kettering

7. “Ignorance is the mother of all evils.” – Francois Rabelais

8. “The most violent element in society is ignorance.” – Emma Goldman

9. “The highest form of ignorance is when you reject something you don’t know anything about.” – Wayne Dyer

10. “Being ignorant is not so much a shame as being unwilling to learn.” – Benjamin Franklin

11. “The recipe for perpetual ignorance is: Be satisfied with your opinions and content with your knowledge.” – Elbert Hubbard 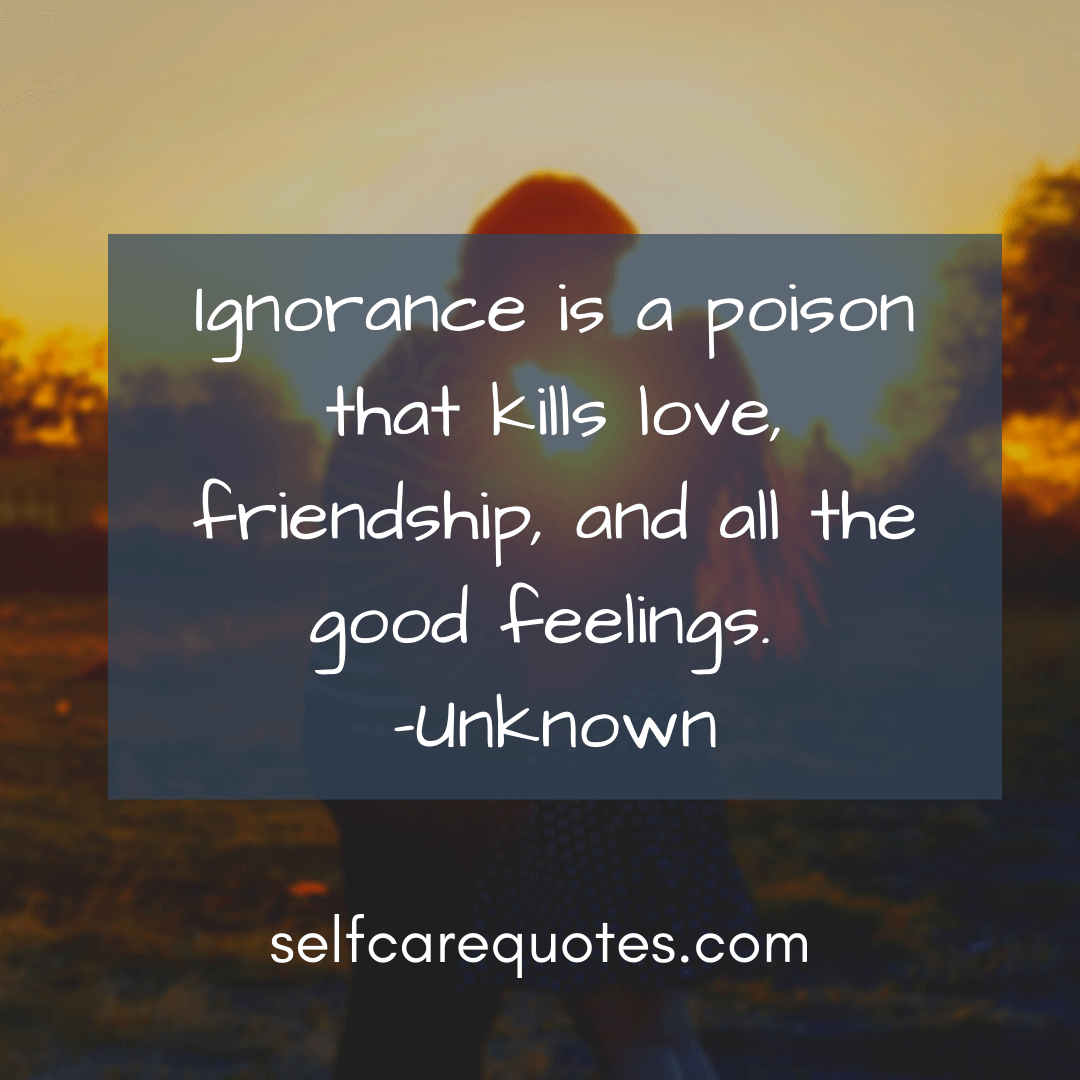 Ignorance is a poison that kills love, friendship, and all the good feelings. -Unknown

The spiritual relationship between two persons depends on their mutual understanding, care, respect, and love. Both of the people should have the proper contribution towards the relationship. Even one person’s ignorance in a love relationship can ruin a lovely relationship.

If a person is ignorant about the commitments and the responsibilities towards his relationship, he cannot be adequately involved in that relationship. So, there can be an adverse impact on the relation. There are various quotes on ignorance in love that reflects the effects of ignorance on the bonding between two persons.

13. Once you feel avoided by someone, never disturb them again. -Unknown

14.Sometimes ignoring you is the best way to protect my feelings -Unknown

15. “Ignorance speaks loudly, so as to be heard; but its volume proves reason to doubt every word.” – Wes Fessler

16. “The first magic of love is our ignorance that it can ever end.” – Benjamin Disraeli

17. “The man who realizes his ignorance has taken the first step toward knowledge.” – Max Heindel

18. “Ignorance is the dominion of absurdity.” – James Anthony Froude

“Ignorance breeds monsters to fill up the vacancies of the soul that are unoccupied by the verities of knowledge.” – Horace Mann

21. “Ignorance is like a delicate fruit; touch it, and the bloom is gone.” – Oscar Wilde

22. “Where ignorance is our master, there is no possibility of real peace.” – Dalai Lama

24. “The only victories which leave no regret are those which are gained over ignorance.” – Napoleon Bonaparte

26. “Ignorance is preferable to error; and he is less remote from the truth who believes nothing than he who believes what is wrong.” – Thomas Jefferson

27. “Better be ignorant of a matter than half know it.” – Publilius Syrus

28. “Indeed, the most important product of knowledge is ignorance.” – David Gross

29. “Ignorance is the mother of admiration.” – George Chapman

“To know anything well involves a profound sensation of ignorance.” – John Ruskin

31. “The greater our knowledge increases the more our ignorance unfolds.” – John F. Kennedy

32. “Ignorance is never out of style. It was in fashion yesterday, it is the rage today and it will set the pace tomorrow.” – Frank Dane

33. “The only good is knowledge, and the only evil is ignorance.” – Herodotus

34. “One of the greatest joys known to man is to take a flight into ignorance in search of knowledge.” – Robert Staughton Lynd

36. “To be proud of learning is the greatest ignorance.” – Jeremy Taylor

37. “His ignorance was as remarkable as his knowledge.” – Arthur Conan Doyle

38. “In order to have wisdom, we must have ignorance.” – Theodore Dreiser

39. “They say a little knowledge is a dangerous thing, but it’s not one half so bad as a lot of ignorance.” – Terry Pratchett

40. “If you think education is expensive, try ignorance.” – Jeff Rich

41. “Ignorance is the curse of God; knowledge is the wing wherewith we fly to heaven.” – William Shakespeare

“There is no slavery but ignorance.” – Robert Green Ingersoll

44. “Ignorance is my least favorite thing. I really think it’s at the core of all our problems.” – Naomi Judd

45. “To remove ignorance is an important branch of benevolence.” – Ann Plato, ignorance quotes

46. “Ignorance is the softest pillow on which a man can rest his head.” – Michel de Montaigne

48. “Not ignorance, but ignorance of ignorance, is the death of knowledge.” – Alfred North Whitehead

49. “Ignorance is not innocence but sin.” – Robert Browning

Friendship is a very good precious relation in our life. Though the relationship is not built upon the blood connection, it is substantial and stable. Beyond the blood and marital relationship, only in the friendship, we find the selfless bonding. This strong relationship also requires care and priority.

If one friend is entirely engaged in the relationship, and the other is ignorant about his role and responsibilities, it will affect their bonding. So knowing the duties of a friend is also necessary for friendship. Different quotes on ignorance in friendship may remind us about the proper care of our friends. 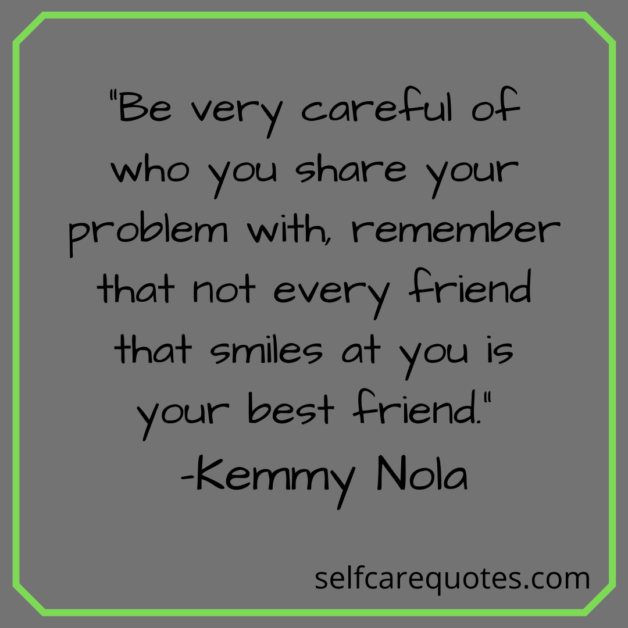 “Be very careful of who you share your problem with, remember that not every friend that smiles at you is your best friend.” -Kemmy Nola

50. “Ignorance and superstition ever bear a close and mathematical relation to each other.” – James F. Cooper

51. “It is harder to conceal ignorance than to acquire knowledge.” – Arnold H. Glasow

52. “Behind every argument is someone’s ignorance.” – Louis D. Brandeis

53. “Ignorance can be improved; willful ignorance and inaction is inexcusable.” – David Brock

55. “Our knowledge can only be finite, while our ignorance must necessarily be infinite.” – Karl Popper

56. “I know of no time in human history where ignorance was better than knowledge.” – Neil deGrasse Tyson

57. “There is no sin but ignorance.” – Christopher Marlowe

59. “I say there is no darkness but ignorance.” – William Shakespeare

60. “Acquaint yourself with your own ignorance.” – Isaac Watts

“Ignorance of the law excuses no man from practicing it.” – Addison Mizner

62. “Admiration is the daughter of ignorance.” – Benjamin Franklin

63. “There is no darkness but ignorance.” – William Shakespeare

64. “If I don’t have wisdom, I can teach you only ignorance.” – Leo Buscaglia

65. “It’s innocence when it charms us, ignorance when it doesn’t.” – Mignon McLaughlin

66. “Beware of false knowledge; it is more dangerous than ignorance.” – George Bernard Shaw

68. “The doorstep to the temple of wisdom is a knowledge of our own ignorance.” – Benjamin Franklin

71. “Ignorance is the failure to discriminate between the permanent and the impermanent, the pure and the impure, bliss and suffering, the self and the non-self.” – Patanjali

72. “Opinion is the medium between knowledge and ignorance.” – Plato

73. “Where there are charity and wisdom, there is neither fear nor ignorance.” – Francis of Assisi

74. “Education is a progressive discovery of our own ignorance.” – Will Durant

75. “If knowledge can create problems, it is not through ignorance that we can solve them.” – Isaac Asimov

76. “Paranoia is just another word for ignorance.” – Hunter S. Thompson

77. “The realization of ignorance is the first act of knowing.” – Jean Toomer

78. “There is nothing more frightful than ignorance in action.” – Johann Wolfgang von Goethe

79. “Why waste time learning, when ignorance is instantaneous?” – Bill Watterson

80. “Ignorance has always been the weapon of tyrants; enlightenment the salvation of the free.” – Bill Richardson

81. “His ignorance is encyclopedic.” – Abba Eban

“I believe that ignorance is the root of all evil. And that no one knows the truth.” – Molly Ivins

83. “Ignorance and inconsideration are the two great causes of the ruin of mankind.” – John Tillotson

84. “The truth is incontrovertible. Malice may attack it, ignorance may deride it, but in the end, there it is.” – Winston Churchill

85. “The truest characters of ignorance are vanity and pride and arrogance.” – Samuel Butler

86. “A great deal of intelligence can be invested in ignorance when the need for illusion is deep.” – Saul Bellow

87. “He knows nothing; and he thinks he knows everything. That points clearly to a political career.” – George Bernard Shaw

88. “When ignorance gets started it knows no bounds.” – Will Rogers

We know that ignorance is a significant element for any relationship. It is equally essential to our relationship with the country. We know that politics is the best medium through which we may contribute to our country.

It is not that all people have to be in the front line of politics; instead, he can contribute to the state by fulfilling his duties as a citizen. If you are ignorant about politics, you cannot accomplish your duties as a responsible citizen. The political ignorance quotes represent our lacking of responsibilities as the citizen. 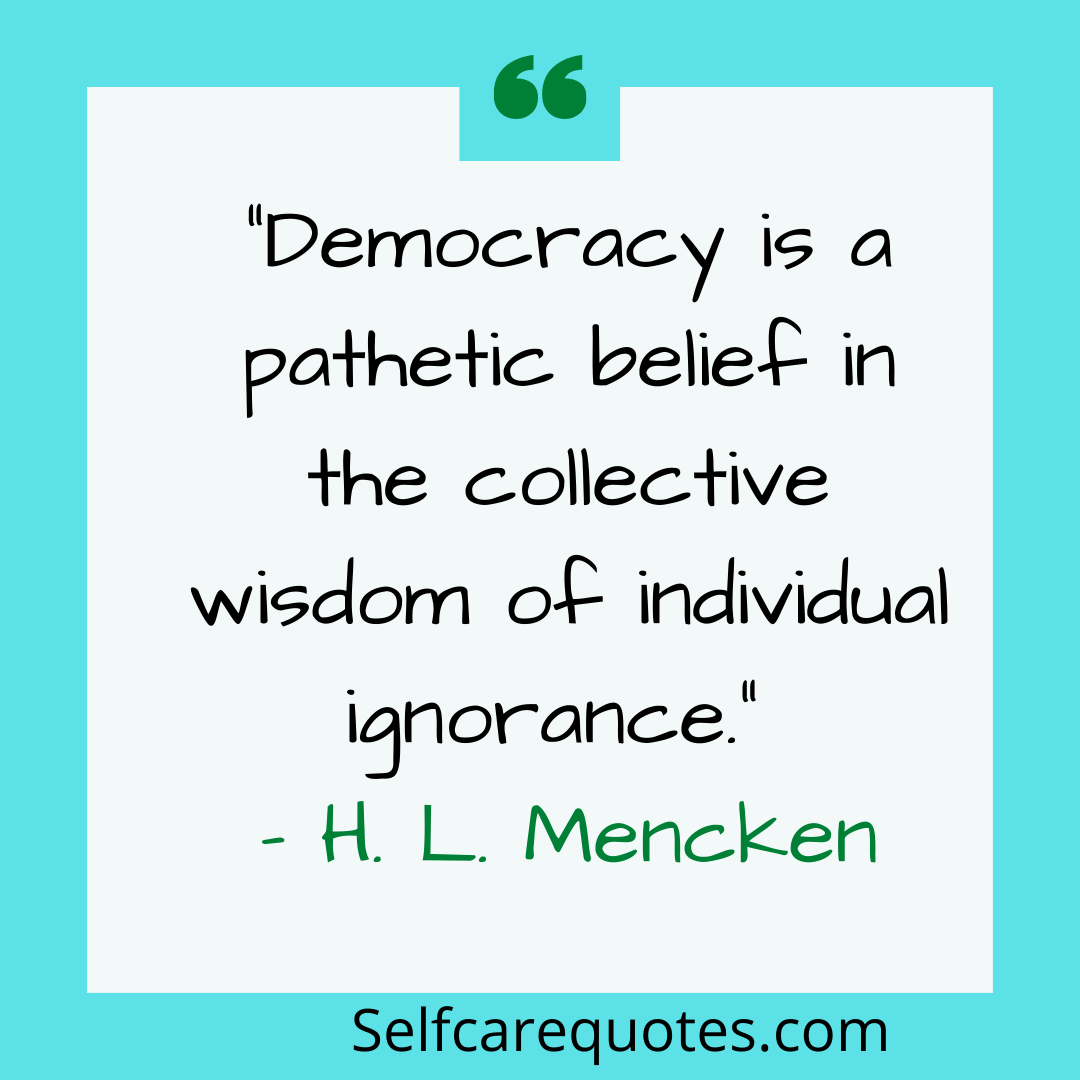 “Democracy is a pathetic belief in the collective wisdom of individual ignorance.” – H. L. Mencken

92.  If you belonged to a political party or a social club that was tied to as much bigotry, misogyny, homophobia, violence, and sheer ignorance as religion is, you’d resign in protest. -Bill Maher

93. “The ignorance of one voter in a democracy impairs the security of all.” – John F. Kennedy

95. There are many causes why a people politically ignorant cannot be roused to action. Perfect political ignorance must be accompanied by indifference to the general interests of society, and thus one of the most powerful motives which can act on the human mind is totally destroyed. -Benjamin Robbins Curtis

97.  A cold-blooded, calculation, unprincipled, usurper, without a virtue, no statesman, knowing nothing of commerce, political economy, or civil government, and supplying ignorance by bold presumption. -Thomas Jefferson

98. “Fear is the lengthened shadow of ignorance.” – Arnold H. Glasow

99. “The greatest obstacle to discovery is not ignorance – it is the illusion of knowledge.” – Daniel J. Boorstin

100. “A quality education grants us the ability to fight the war on ignorance and poverty.” – Charles B. Rangel

“Nothing in all the world is more dangerous than sincere ignorance and conscientious stupidity.” – Martin Luther King, Jr.

102. “Most ignorance is evincible ignorance. We don’t know because we don’t want to know.” – Aldous Huxley

103. “Nothing is more terrible than to see ignorance in action.” – Johann Wolfgang von Goethe

106. “If ignorance is bliss, there should be more happy people.” – Victor Cousin

108. “Ignorance more frequently begets confidence than does knowledge: it is those who know little, not those who know much, who so positively assert that this or that problem will never be solved by science.” – Charles Darwin

Top 50 Toni Morrison Quotes That Will inspire You