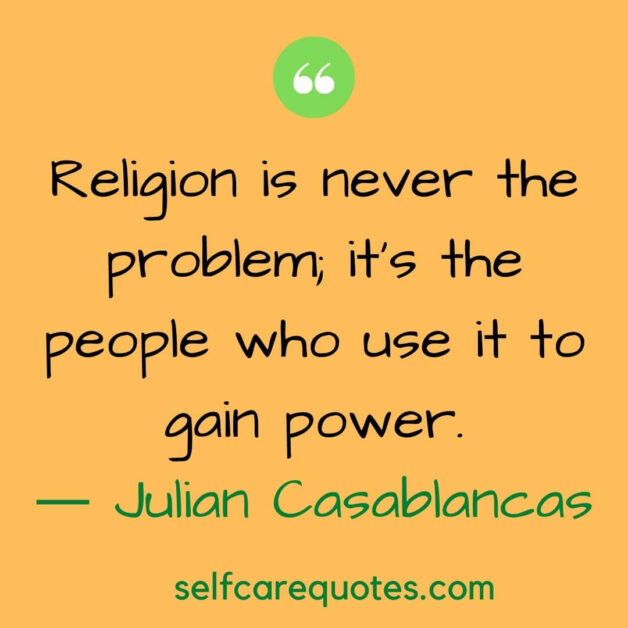 Julian Casablancas is an American singer, songwriter, musician and record producer. But he gained most popularity as a singer.

He worked for two bands in his singing career. He gained the most popularity as a lead singer in the rock band ‘The Strokes’. He sang a lot of songs for this brand.

At one point of his career Julian Casablancas thought to publish independent albums. In this time besides working with ‘The Strokes’, he released his solo albums.  One of his solo albums is Phrazes for the Young.

In the later part of his singing career, Julian Casablancas worked with another rock band. The name of this rock band is The Voidz. For this brand he sang in the albums like ‘Tyranny’ and ‘Virtue’.

Now let’s talk about his quotes. As he is a songwriter, all the lines of his songs are quotes. Julian Casablancas’s quotes are really famous among his fans.

1. Religion is never the problem; it’s the people who use it to gain power. ― Julian Casablancas

2. I’m happy to feed the illusion that I’m a lazy recluse.― Julian Casablancas

4. Art is the image of life, it’s purpose simply to enhance it.― Julian Casablancas

5. Make sure your heart is singing right until the day it stops.― Julian Casablancas

6. Greed is the inventor of injustice as well as the current enforcer.― Julian Casablancas

7. With a hundred ways to do a dozen things, why not try it all?― Julian Casablancas

8. I think a lot of people study the rules too much and then don’t know how to be creative.― Julian Casablancas

9. Forgive them even if they are not sorry― Julian Casablancas

10. The best artists are the ones that work the hardest, and if you work hard enough, you’ll eventually experience the happy accidents that are art.― Julian Casablancas

11. I have to say, I’m good with gifts. If I find something perfect for a certain person, I’ll just get it and put it away in a kind of nook under my bed – a little gift hutch, if you prefer.― Julian Casablancas

12. You know some of the people in The Strokes, yeah, their parents had success – but we didn’t live like yuppies.― Julian Casablancas

13. Doing heroin is like walking around with a terrorist as your friend. It’s like taking a terrorist around to parties You never know when it’s going to blow up on you.― Julian Casablancas

14. It’s not like I wake up and songs flow out of me.― Julian Casablancas

15. Who you are vs. who you wish you were: Who wins?― Julian Casablancas

16. I feel like I’ve given up a lot of my fantasies. I just want to do things differently, and to a lot of people that’s annoying. I like weird stuff. I always hoped if we had a big success it would be on our own terms.― Julian Casablancas

18. I don’t really care about clothes, but it’s about wearing something that gives you social confidence.― Julian Casablancas 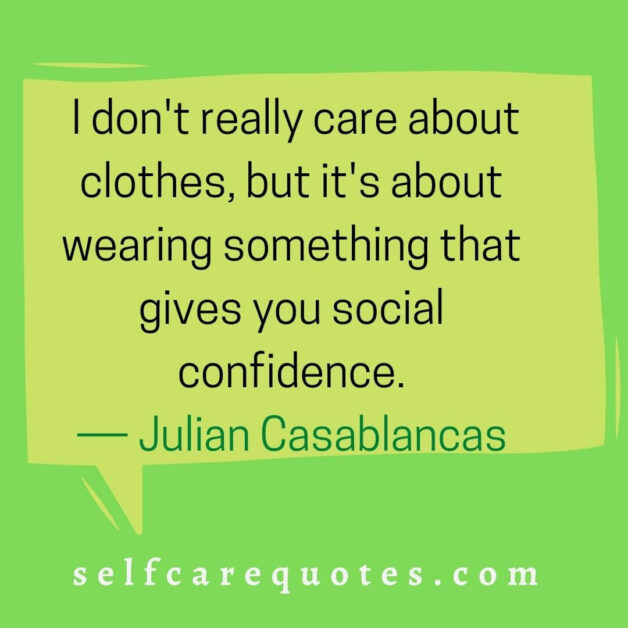 19. It was 100,000 years before we figured out what to do with fire. Imagine cavemen, sitting in front of a fire, eating raw meat for 100 thousand years.― Julian Casablancas

20. No matter who I’m talking to, I always talk like I’m doing an interview.― Julian Casablancas

21. I think you can only get closer to satisfaction but you never fully arrive.― Julian Casablancas

22. I feel slightly confused about certain things. Practical and tactical things. When you try to make everyone happy… in the end you’ve got to make yourself happy.― Julian Casablancas

23. The artistic element of Manhattan has kind of moved to Brooklyn. Has it changed it? Yeah. Has it ruined it? I would say no. It is what it is. I say better that than an urban war zone.― Julian Casablancas

25. Pretty much the only goal I’ve had since the beginning, which I still have, is just to get better, work hard, focus, and everything else will just be a bonus. As long as I’m satisfied, and I think we’re getting better with every song compared to the last, then I’m satisfied and that’s all I want. If we don’t achieve that, then I’ll be disappointed.― Julian Casablancas

26. I guess the best thing about marriage is the fact you’ve got the coolest partner you can imagine by your side for all the things you’re going to face in your life. So far, Juliet’s been there for me. She’s been good for my voice, good for my everything.― Julian Casablancas

27. Boarding school didn’t feel like my world, I felt like an alien; people there had a lot of money.― Julian Casablancas

28. If it doesn’t start with you, it dies with you.― Julian Casablancas

29. Just slow it down enough to enjoy the ride.― Julian Casablancas

30. I want to be one of those people, be they writers, poets, musicians, who leaves clues for the next generation. The really good people leave clues that help feed the human race. That’s my aspiration.― Julian Casablancas

31. Can our mind evolve to be something other than an extension of our animal needs?― Julian Casablancas

32. When the Strokes first started playing gigs, instead of getting into a costume for the shows, we talked about how we should dress every day, in real life, like we’re playing onstage.

I don’t really care about clothes, but it’s about wearing something that gives you social confidence. Or maybe helps you pick up chicks.― Julian Casablancas

33. We’re so quick to point out our own flaws in others.― Julian Casablancas

34. The best solutions are often simple, yet unexpected.― Julian Casablancas

35. If you’re in a bar and a certain song comes on and the vibe is just different, it evokes the kinds of things that you want to feel, and if music can do that it’s a very special thing.― Julian Casablancas

36. I kinda like messing with perception a little bit. Kind of what drugs do sometimes, and drinking. I mean, you know, you mess with your mind a little bit to see life from different angles. Within reason, if you can handle it.― Julian Casablancas

38. Kids are always honest, ’cause they don’t think they’re ever going to die.― Julian Casablancas

40. The problem with touring isn’t the traveling and the shows, it’s the vegetal state you get into.― Julian Casablancas

41. Whenever I go to shows, I end up looking at what shoes the guy onstage is wearing and the jacket he’s got on. And when you know everything’s gonna be under scrutiny, it makes you feel more comfortable if you have cool stuff.― Julian Casablancas

42. In L.A., it’s so sunny out all the time that even though I’m working all day I have this illusion that I’m on some kind of vacation. New York is so condensed and exciting but you stay there too long and all that turns into anxiety a little bit. It’s nice to escape here and there.― Julian Casablancas

44. Now, the good of business is put above anything else, as corporations have become the new ruling body. Most decisions seem to be made like ones of a medieval king: whatever makes profit while ignoring and repressing the truth about whatever suffering it may cause (like pop music, for that matter).― Julian Casablancas

45. I’m just going to try and be a good dad and not spoil the kid: give him love and encouragement but also discipline. Me and my woman, we don’t want him to feel too entitled.― Julian Casablancas

46. Making an album can be like being pregnant: you want to pop that thing out and show everybody!― Julian Casablancas

47. It’s like an inner struggle for me, between saying I don’t give a **** and trying to make it work. You want to do the right thing, but I’m sick of people thinking I’m difficult.― Julian Casablancas

48. I’m not a pop song lyric writer. I can’t just focus on one simple meaning or even a double entendre.― Julian Casablancas

49. Sometimes I’ve sat outside, not to tan, but as a result of that I ended up tanning slightly.― Julian Casablancas

50. I’m really grateful. But I never had the rock star dream. I thought it would be cool to be a modern-day composer.― Julian Casablancas

The only goal right now that I can have, the only thing I can offer right now, is the need to get good at music, do something with quality.― Julian Casablancas

Julian Fernando Casablancas was born on August 23, 1978. His birthplace is New York of America. He is from Spanish roots. His father is a Spanish-American Businessman, namely John Casablancas.

His mother’s name is Jeanette Christiansen. One thing about his mother is astonishing, i.e. his mother was Miss Denmark in 1965.

Julian Casablancas childhood became intolerable after his parents’ divorce. His music career started with the help of his step farther.

We know Julian Casablancas birth and living was in the USA but his education life is various. He took elementary from Institute Le Rosey boarding school in Switzerland.

But then he returned to New York. here he went to Dwight School. This was in New York. Here in this meet some of his music partners.

They were later important members of ‘The Strokes’ band. Julian Casablancas graduated from Lycee Francais de New York. He became a graduate in 1996.

As a professional singer we can say Julian Casablancas is a successful person. He along with some friends founded the band ‘The Strokes’. This brand released it’s superhit 1st album in the year 2001.

After this he became the identity of this band. He played the role of lead singer here. He also published his individual albums too. He had a passion for writing songs too.

This is also another successful part of his career. He married Juliet Joslin and the couple have 2 sons.

Julian Casablancas is a person from a businessman family. His life is not so unconventional. He lived a completely simple life.

But if we want to follow him then we have to look at some of his qualities. Julian Casablancas is really a talented singer.

His songs are really awesome. If we go through his singing career, we will find some stages where he struggled to go forward. But he never gave up his try.

We can follow his passion of giving up. His hard work is also a matter to follow for us.