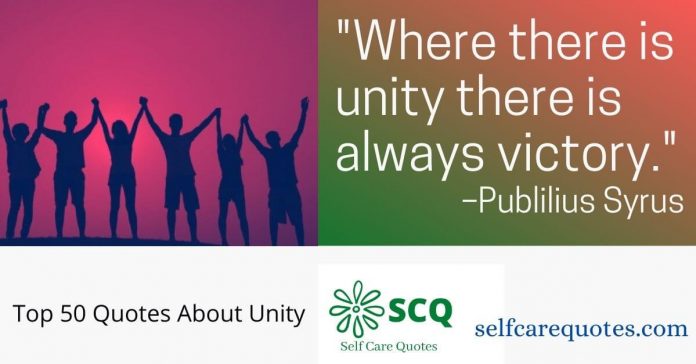 Unity is a word with various meanings. There is a different use of this word. Some people use this word to refer to the oneness of some diverse or scattered things.

Some others use this word to refer to the totality of some parts. If this word is used to refer to the oneness of some people then this becomes a heavyweight quality of them. Based on unity many famous authors wrote some evergreen and universal words or quotes.

Quotes about unity are famous among people. These quotes keep some harmony and peace in our society. These quotes also keep us in a motivating situation to be united.

1. Where there is unity there is always victory. –Publilius Syrus 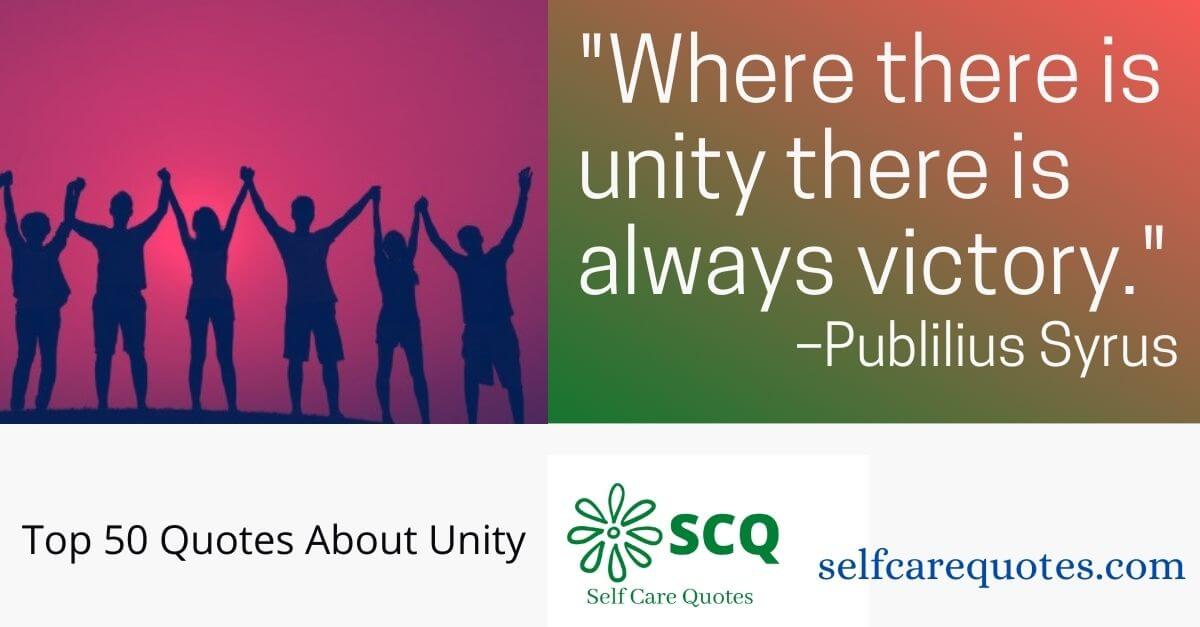 2. “Unity to be real must stand the severest strain without breaking.” – Mahatma Gandhi

3. “When there is no enemy within, the enemies outside cannot hurt you.” – Winston S. Churchill

4. “So powerful is the light of unity that it can illuminate the whole earth.” – Baha’U’Llah

8. “You don’t get unity by ignoring the questions that have to be faced.” – Jay Weatherill

9. “The significance which is in unity is an eternal wonder.” – Rabindranath Tagore

10. “There is beauty and power in unity. We must be united in heart and mind. One world, one people.” – Lailah Gifty Akita

11. “No doubt, unity is something to be desired, to be striven for, but it cannot be willed by mere declarations.” – Theodore Bikel

12. “Even the weak become strong when they are united.” – Friedrich von Schiller

13. “Unity is a beast in itself. If a wolf sees two little boys playing in the woods on one side, and a big strong man on the other, he will go to the one who stands alone.” – Suzy Kassem

14. “Unity is vision; it must have been part of the process of learning to see.” – Henry Adams

15. “You can’t have unity without diversity.” – Richard Twiss

16. “Where destruction is the motive, unity is dangerous.” – Ravi Zacharias

17. “The essence of the beautiful is unity in variety.”? -W. Somerset Maugham

18. “History teaches us that unity is strength, and cautions us to submerge and overcome our differences in the quest for common goals, to strive, with all our combined strength, for the path to true African brotherhood and unity.” – Haile Selassie

19. “There is no such thing as a self-made man. You will reach your goals only with the help of others.” – George Shinn

20. “Unity should be the cornerstone of relations.” – Haile Selassie

21. “He who experiences the unity of life sees his own Self in all beings, and all beings in his own Self, and looks on everything with an impartial eye.” – Buddha

22. “What divides us pales in comparison to what unites us.”– Edward Kennedy

23. “There is more power in unity than division.” – Emanuel Cleaver

24. “Not in numbers but in unity that our great strength lies.” – Thomas Paine

25. “Unity and simplicity are the two true sources of beauty.” – Johann Joachim Winckelmann

26. “Even if a unity of faith is not possible, a unity of love is.”? –Hans Urs von Balthasar

27. “Nature creates unity even in the parts of a whole.” – Eugene Delacroix

28. “The unity of freedom has never relied on uniformity of opinion.” – John F. Kennedy

“Unity without verity is no better than conspiracy.” – John Trapp

Quotes about unity in diversity:

Diversity refers to the scattered situation of something, especially when the same originated things stay in different places or different situations or can be in different mentality, then it is called diverse.

Unity is always the best way to live in this society and to do anything easily. World-famous writers and famous people always try to keep a united situation in diverse conditions.

These famous writers and persons also insisted people be united because unity is strength. Quotes about unity in diversity are accepted and appreciated things in this world.

29. “Our ability to reach unity in diversity will be the beauty and the test of our civilization.” – Mahatma Gandhi 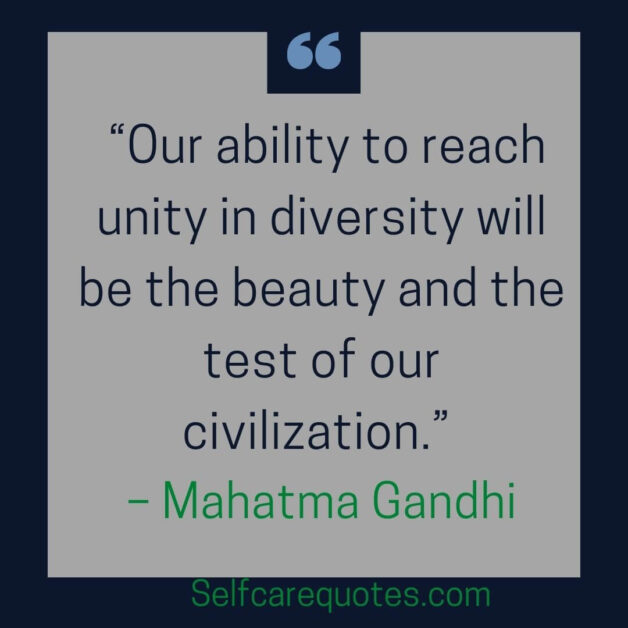 31. “What we have to do… is to find a way to celebrate our diversity and debate our differences without fracturing our communities.” – Hillary Clinton

33. “In diversity there is beauty and there is strength.” – Maya Angelou

34. “Diversity in the world is a basic characteristic of human society, and also the key condition for a lively and dynamic world as we see today.” – Jintao Hu

35. “We are all different, which is great because we are all unique. Without diversity life would be very boring.” – Catherine Pulsifer

36. “Diversity is not about how we differ. Diversity is about embracing one another’s uniqueness.” – Ola Joseph

37. “Diversity: the art of thinking independently together.” – Malcolm Forbes

38. “I feel my heartbreak to see a nation ripped apart by its own greatest strength–it’s diversity.” – Melissa Etheridge

40. “I can tell you, without diversity, creativity remains stagnant.” – Edward Enningful

41. “We all should know that diversity makes for a rich tapestry, and we must understand that all the threads of the tapestry are equal in value no matter what their color.” – Maya Angelou

42. “If we cannot now end our differences, at least we can help make the world safe for diversity.” – John F. Kennedy

43. “Strength lies in differences, not in similarities.” – Stephen R. Covey

44. “Diversity is about all of us, and about us having to figure out how to walk through this world together.” – Jacqueline Woodson

45. “Human diversity makes tolerance more than a virtue; it makes it a requirement for survival.” – Rene Dubos

They argued that if you have a lot of people in a group then they will always try to dominate one another and peace will eventually abolish from there.

But I want to correct them by saying that if there are people from a diverse mentality that cannot be called unity.

“Peace and friendship with all mankind is our wisest policy, and I wish we may be permitted to pursue it.” – Thomas Jefferson

“Peace requires everyone to be in the circle – wholeness, inclusion.” – Isabel Allende

“No man is an island, entire of itself; every man is a piece of the continent.” – John Donne

Teamwork is a big term in the corporate sector. Some people think that without teamwork no company or corporate unit can develop.

Teamwork is the most important to establish a business or even to complete any kind of project. We can say teamwork is synonymous with unity.

If every person of a team contributes from their own place then they must shine and that project surely will be successful. Thinking about the importance of teamwork philosophers and other thinkers wrote their opinion about teamwork.

Those opinions can be called quotes. Teamwork quotes are essential to motivate all team members and that motivation will lead to the successful end of the project.

47.  Unity is strength… when there is teamwork and collaboration, wonderful things can be achieved. – Mattie Stepanek 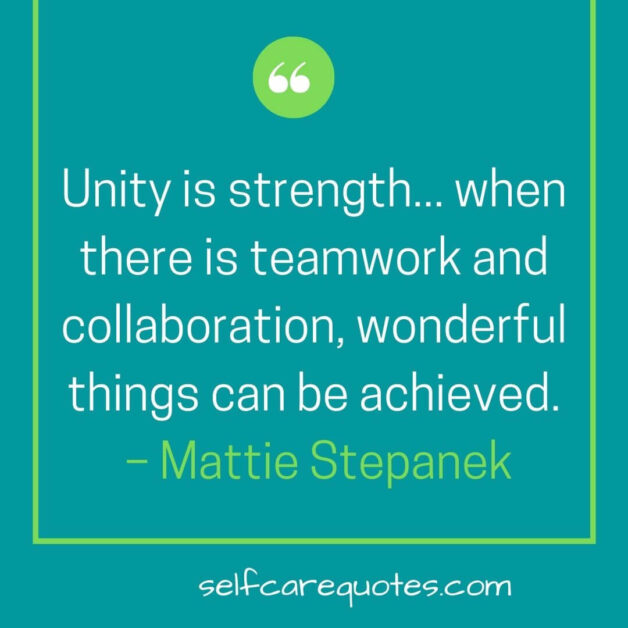 48. “We must learn to live together as brothers or perish together as fools.” – Martin Luther King, Jr.

50. “An individual has not started living until he can rise above the narrow confines of his individualistic concerns to the broader concerns of all humanity.” – Martin Luther King, Jr.

“Together, we form a necessary paradox; not a senseless contradiction.” – Criss Jami

Whatever the term you choose, that can be teamwork, peace, or unity. Unity is important to uprise our society and personal life. Those qualities also help us to develop an individual’s mental strength. Quotes about unity are universally accepted words to get success in life.