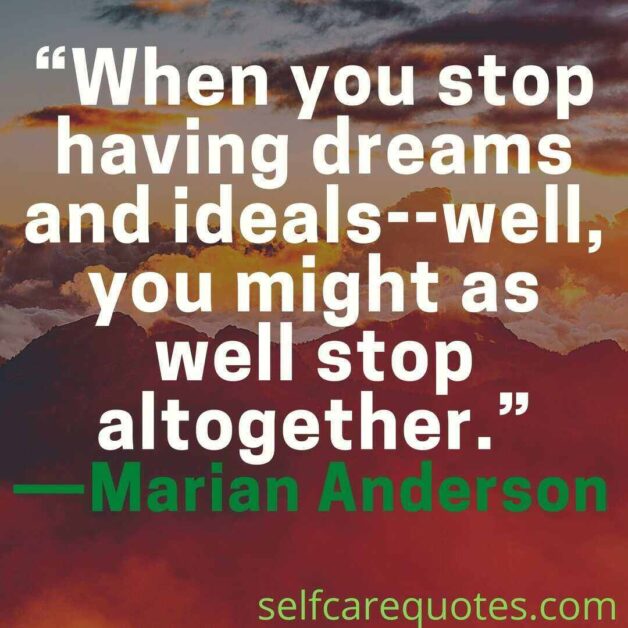 1. “When you stop having dreams and ideals–well, you might as well stop altogether.”― Marian Anderson

2. Leadership should be born out of the understanding of the needs of those who would be affected by it. ― Marian Anderson

3. None of us is responsible for the complexion of his skin. This fact of nature offers no clue to the character or quality of the person underneath.― Marian Anderson

4. As long as you keep a person down, some part of you has to be down there to hold him down, so it means you cannot soar as you otherwise might. ― Marian Anderson

5. Fear is a disease that eats away at logic and makes man inhuman. ― Marian Anderson

7. You lose a lot of time, hating people.― Marian Anderson

8. I suppose I might insist on making issues of things. But that is not my nature, and I always bear in mind that my mission is to leave behind me the kind of impression that will make it easier for those who follow.― Marian Anderson

10. Prejudice is like a hair across your cheek. You can’t see it, you can’t find it with your fingers, but you keep brushing at it because the feel of it is irritating.― Marian Anderson

11. There are many persons ready to do what is right because in their hearts they know it is right. But they hesitate, waiting for the other fellow to make the make the first move – and he, in turn, waits for you.― Marian Anderson

Who Was Marian Anderson?

The people who love opera and other traditional music like contralto in America know the name, Marian Anderson. Marian Anderson was an American contralto. And opera singer. She is famous for many reasons but one of the main reasons is her soft voice and opera performance.

We can say Marian Anderson is a strong lady against the racial discrimination of America. In the mid 20th century, she was one of the most deprived singers of America for being black.

Marian Anderson was the first singer who performed in Metropolitan Opera. She was also a human rights activist in America. She worked for the Black people of the USA. Marian Anderson Quotes are also famous among her followers.

12. The minute a person whose word means a great deal to others dare to take the open-hearted and courageous way, many others follow.― Marian Anderson

13. I have a great belief in the future of my people and my country.― Marian Anderson

14. A singer starts by having his instrument as a gift from God… When you have been given something in a moment of grace, it is sacrilegious to be greedy.― Marian Anderson

15. I had gone to Europe . . . to reach for a place as a serious artist, but I never doubted that I must return. I was – and am – an American ― Marian Anderson

16. I forgave the DAR many years ago. You lose a lot of time hating people.― Marian Anderson

17. “Everyone has a gift for something, even if it is the gift of being a good friend.”― Marian Anderson

19. Where there is money, there is fighting.― Marian Anderson

20. If you have a purpose in which you can believe, there’s no end to the amount of things you can accomplish.― Marian Anderson

The early life of Marian Anderson was as simple as an ordinary black girl of that time. She was born on 27 February 1997. Her parents are John Berkley Anderson and Annie Delilah Rucker. The birthplace of this famous singer and social reformer was in Philadelphia. Her mother was a school teacher but she was not paid for being black.

Different sources inform us in a different way about Marian Anderson’s education. Some say that her elementary education was completed by her family and other informal schools. But she went to William Penn High School.

After completing the high school education, she wanted to admit herself to a music school. But the financial condition of her family did not allow her to do that. But later she took that training.

As I already said that Marian Anderson is a singer but not in stereotype. She performed in different famous events in her career. Among her best achievements, she sang in the White House.

She is also the first African-American singer who sang with New York’s Metropolitan Opera. She also traveled to different countries and sang there. Marian Anderson’s social work is also a part of her career.

If you want to know about a powerful lady singer, You can look at Marian Anderson. She has a followable personality and also some followable works. Marian Anderson’s quotes are the most loved things about this singer.

As I already said that Marian Anderson is a strong lady against the white domination in America. She works as a human rights activist going against the ruling power of that time. We can follow her to take some courage from her personality.

If we can take some fearless attitude from her and then we can protest against any kind of injustice in our society. Marian Anderson is also really passionate and determined about her success and future.

She received a lot of injustice and oppression from society but she did not let everything go against her. She tried and finally, she owned in her way. We can follow her to take the quality of passion to us.

This type of passion can help us to be successful in our own life. Marian Anderson also left a lot of life-related and universal quotes. These quotes can help us solve our life’s many problems. We can follow her for this reason also.