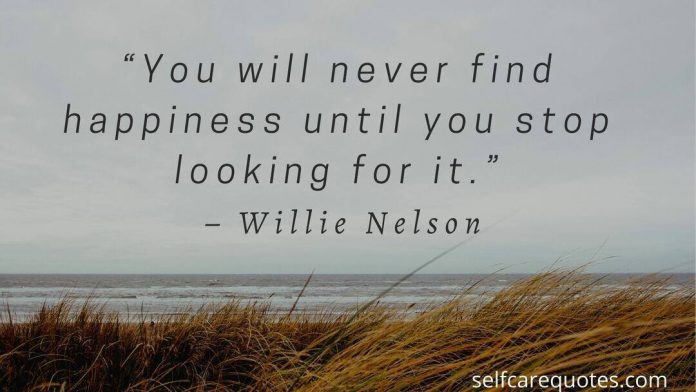 Who is Willie Nelson?

Willie Nelson is the short name of Willie Huge Nelson. He is a successful American actor, musician, and also writer. His name becomes a buzzword in the field of the American music industry after the publication of his album the Shotgun Willie in 1973. His other two famous albums also brought huge fame for him. The name of these albums is Red Headed Stranger (1975) and Stardust (1978). He gains the prestige of being one of the most important figures in the field of outlaw country. Outlaw country is one of the important branches of American folk music. As a famous musician and author of many books, Willie Nelson wrote a huge number of quotes in his life. Willie Nelson’s quotes are realistic and life-related. Many people still love him for these famous quotes.

1.  “You will never find happiness until you stop looking for it.” – Willie Nelson 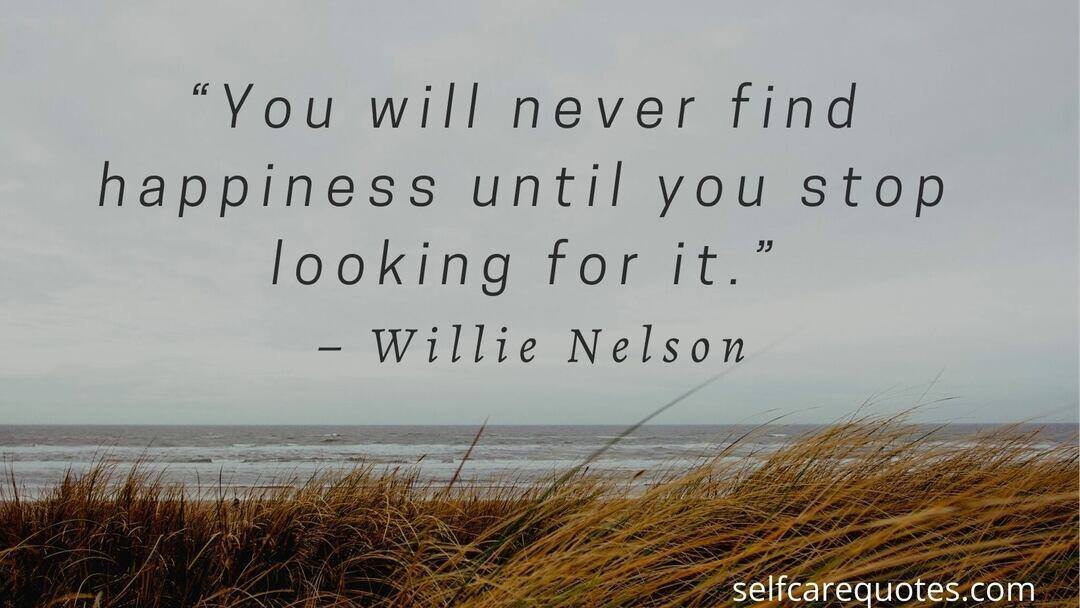 2.  “The early bird gets the worm, but the second mouse gets the cheese.” – Willie Nelson

3. “Memories remind us that every moment of our lives, even the most tragic, has contributed to our strength. We’ve gotten through. We’re still here.” – Willie Nelson

4. “You don’t have to be poor to need something or somebody.”– Willie Nelson

5. “Cruelty is all out of ignorance. If you knew what was in store for you, you wouldn’t hurt anybody, because whatever you do comes back much more forceful than you send it out.” – Willie Nelson

6. “We create our own unhappiness. The purpose of suffering is to help us understand we are the ones who cause it.” – Willie Nelson

7. “Once you replace negative thoughts with positive ones, you’ll start having positive results.”– Willie Nelson

8. “We’ve already been reincarnated about a million times, maybe. It doesn’t make sense any other way.” – Willie Nelson

9. “It doesn’t hurt to feel sad from time to time.” – Willie Nelson

11. “There’s a great enthusiasm for good country music all over the world.” – Willie Nelson

13. “I like myself better when I’m writing regularly.” – Willie Nelson

14. “When I’m driving the highway by myself is when I write best.” – Willie Nelson

15. “I never gave up on country music because I knew what I was doing was not that bad.” – Willie Nelson

16. “Sometimes there is a 36-piece orchestra going off in my stomach.” – Willie Nelson

17. “I think most art comes out of poverty and hard times.” – Willie Nelson

19. “Writing books is fun because after I do a show for a couple hours, I’m in a bus for 22 hours. It’s not hard for me to look out the window and tell a joke here and there.” – Willie Nelson

20. “We are the same. There is no difference anywhere in the world. People are people. They laugh, cry, feel, and love, and music seems to be the common denomination that brings us all together. Music cuts through all boundaries and goes right to the soul.” – Willie Nelson

21. “Ninety-nine percent of the world’s lovers are not with their first choice. That’s what makes the jukebox play.” – Willie Nelson

22. “When you’re singing, you’re using extra muscles, and it requires a lot of exercise and breathing. You can’t do that if you’re a sissy. If I have any fitness advice for people, I’d tell them to sing more. It’s good therapy, too.” – Willie Nelson

23. “I would like to see more airplay for all artists, no matter what age. I think there’s a lot of money being spent toward the young guys, but a lot of the older guys are the ones who blazed the trail for those young guys.” – Willie Nelson

24. “Great songs stand out wherever they’re from.” – Willie Nelson

25. “You could make any song sound creepy if you wanted. It’s all about the inflection.” – Willie Nelson

26. “I like to stick with music I know I can play. I love classical, but I don’t think I could ever play it. I’m just not qualified.” – Willie Nelson

28. “Three chords and the truth – that’s what a country song is.” – Willie Nelson

29. “I think people need to be educated to the fact that marijuana is not a drug. Marijuana is an herb and a flower. God put it here. If He put it here and He wants it to grow, what gives the government the right to say that God is wrong?” – Willie Nelson

30. “To hell with what people think. Just be who you are and you’ll be happy.” – Willie Nelson

31. “If you really want to get along with somebody, let them be themselves.” – Willie Nelson 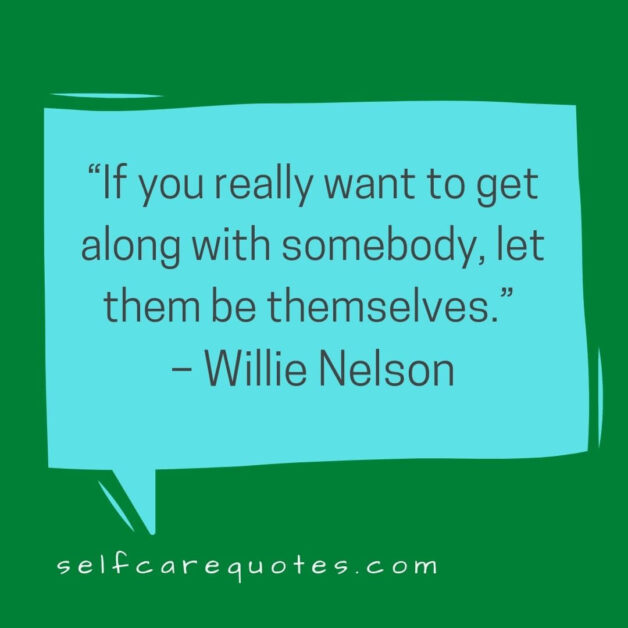 32. “I think most people realize that our problems are our government, not me and you individually, except that we can – must have some sort of responsibility, because they’re in there and they were elected, so we have to defend ourselves on those lines.” – Willie Nelson

33. “I don’t think any person has any special knowledge about what God has planned for me and you any more than me and you do.” – Willie Nelson

34. “I’m just an ole redneck from Texas who ain’t a Democrat or Republican, but I can look at a guy and tell whether I like him or not.” – Willie Nelson

35. “I’m from Texas, and one of the reasons I like Texas is because there’s no one in control.” – Willie Nelson

36. “The first time I got onstage was when I was about 5 years old. It was at a church social, and I had a poem to recite.”– Willie Nelson

37. “I started learning my lessons in Abbott, Texas, where I was born in 1933. My sister Bobbie and I were raised by our grandparents. We never had enough money, and Bobbie and I started working at an early age to help the family get by. That hard work included picking cotton. Picking cotton is hard and painful work, and the most lasting lesson I learned in the fields was that I didn’t want to spend my life picking cotton.” – Willie Nelson

38. “Where I grew up, Bob Wills and his western swing was very popular. And western swing is not that far from jazz and blues.” – Willie Nelson

40. “When I was about 12, I had my first paying gig – 8 dollars to play rhythm guitar in a polka band. Pretty soon, I ended up playing in all the bars within driving distance of Abbott, Texas.” – Willie Nelson

41. “I used to work in the cotton fields a lot when I was young. There were a lot of African Americans working out there. A lot of Mexicans – the blacks and the whites and the Mexicans, all out there singing, and it was like an opera in the cotton fields, and I can still hear it in the music that I write and play today.” – Willie Nelson

43. “I started out really young, when I was four, five, six, writing poems, before I could play an instrument. I was writing about things when I was eight or 10 years old that I hadn’t lived long enough to experience. That’s why I also believe in reincarnation, that we were put here with ideas to pass around.” – Willie Nelson

44. “I started out writing poems before I figured to put melodies to them and play the guitar. Somewhere, there’s a book out there on all those early songs and poems. I hope no one ever finds it. I don’t think it’s my finest work.” – Willie Nelson

45. “Freedom is control in your own life.” – Willie Nelson 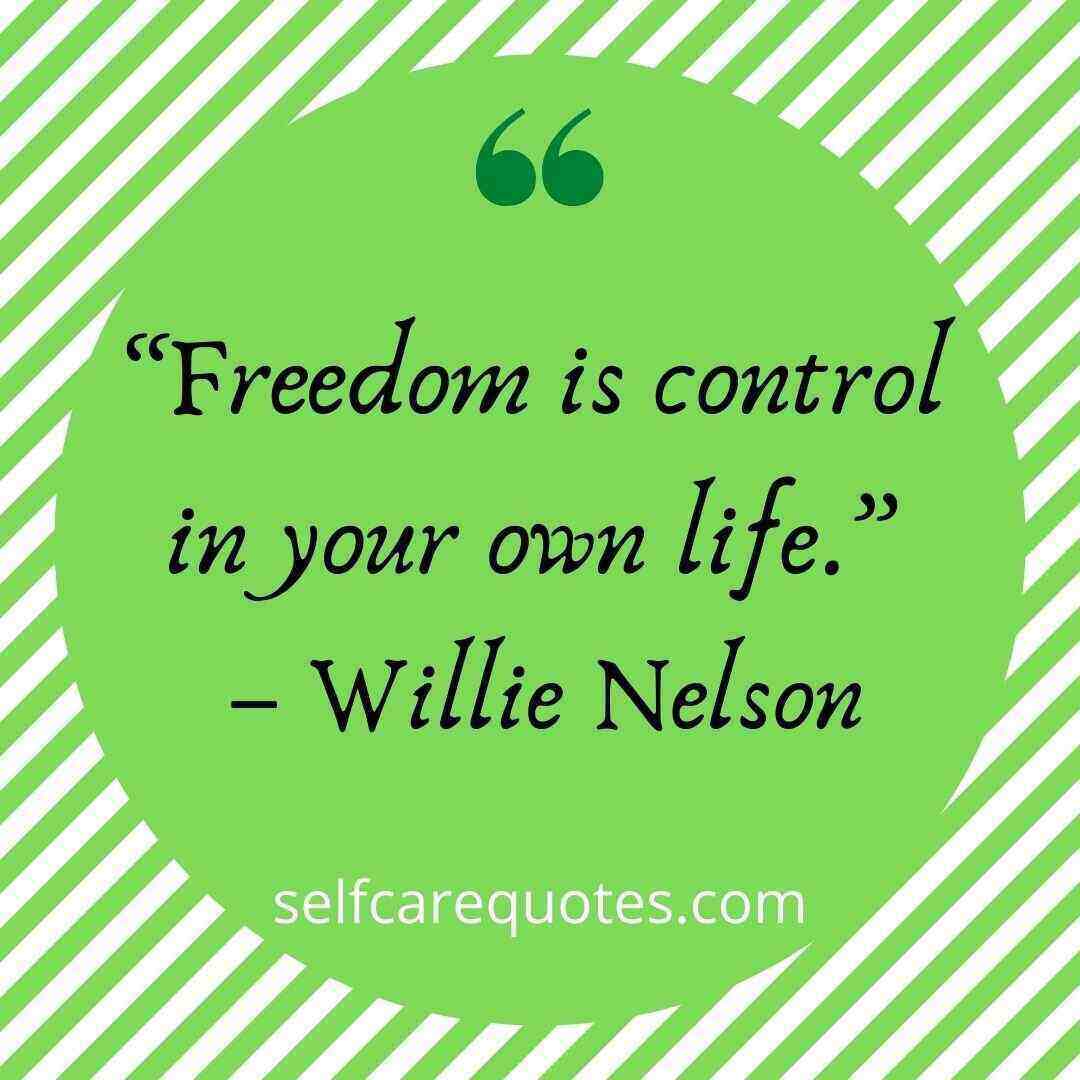 46. “I think I’m basically the same guy I always was. Maybe I’ve learned, through experience, to rein in some of the anger and temper they say redheads normally have.” – Willie Nelson

48. “When I started counting my blessings, my whole life turned around.” – Willie Nelson

50. “You know why divorces are so expensive? They’re worth it.” – Willie Nelson

Nelson was born on 29th April 1933. His birthplace is Abbott, Texas. His parents are Myrle Marie and Ira Doyle Nelson. The time of birth if this famous person was not in good time 1933 was a year of economic fall down. He started singing at a very early age. At the age of seven wrote his 1st song. He also played guitar for a local band at the age of 9.

Willie Nelson completed his high school education in 1950 at the age of 17. His school name is Abbott Independent School District. But without taking any higher education, he joined Air Force. His back pain did not allow him to continue this job. Then he started taking higher education from Baylor University. But his passionate attachment with music dropped him from the university.

Willie Nelson did many things in his life as a profession. He played guitar for a band. Worked in Air Force for some time. He was also a radio jockey. Everywhere he failed. But when he turned to music, his life started to change. Now he has a huge number of books as an author. A lot of albums as a musician and singer. Willie Nelson also acted almost for 30 movies.

If any person wants to know about someone who becomes famous from a really bad situation without taking any help from any person, he can see the biography of Willie Nelson. He is at a time a hardworking man and passionate person. People love him most along with his quotes.

We can follow him for his passion for being successful and his sacrifice for that. Willie Nelson is a person who failed in his life many times. Once he was in the Air Force of the USA. He was released from there for his back pain. After that Willie Nelson re-entered his education life. But this time the love for music stands against his being a graduate. He also worked for many radio stations in his early life but he was not successful there. Being a failed person so many times, Nelson stands again. He starts his career from the beginning. And finally, he is one of the most loved musicians in UAS and even in English speaking country. We can follow him for his hard work too.