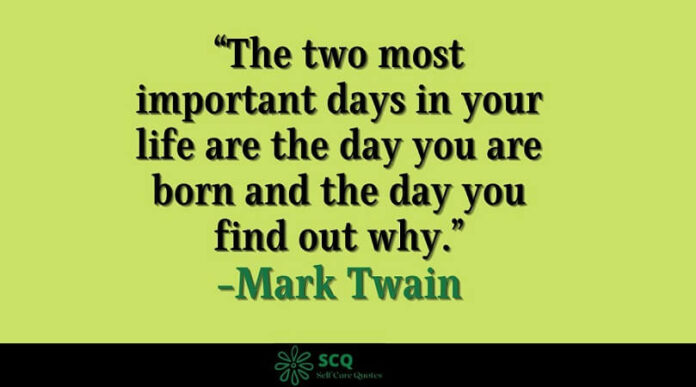 Who was Mark Twain?

He left school at age 12 to work as a printer’s apprentice and eventually became a riverboat pilot. He wrote about his experiences in life on the river in his books. Twain moved to California in 1861 during the gold rush, but he didn’t strike it rich. He moved back east a few years later and began writing for newspapers.

His stories about life on the Mississippi River made him famous and he began publishing novels. In 1884, he published The Adventures of Huckleberry Finn, which is now considered one of the great American novels.

1. “A lie can travel halfway around the world while the truth is putting on its shoes.”

2. “Anger is an acid that can do more harm to the vessel in which it is stored than to anything on which it is poured.”

3. “Clothes do not merely make the man; clothes are the man.”

4. “Nothing so needs reforming as other people’s habits.” 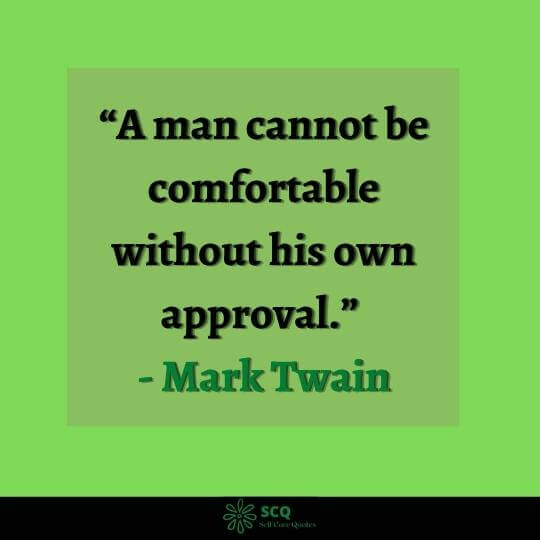 5. “A man cannot be comfortable without his own approval.”

6. “There is no sadder thing than a young pessimist, except an old optimist.”

7. “Man is the only animal that blushes. Or needs to.”

8. “The only very marked difference between the average civilized man and the average savage is that the one is gilded and the other is painted.”

9. “Give every day the chance to become the most beautiful of your life.”

10. “The two most important days in your life are the day you are born and the day you find out why.”

11. “The secret of getting ahead is getting started.”

12. “Twenty years from now you will be more disappointed by the things you didn’t do than by the ones you did do. So, throw off the bowlines. Sail away from the safe harbor. Catch the trade winds in your sails. Explore. Dream. Discover.”

13. “Courage is resistance to fear, mastery of fear, not absence of fear.”

“Never put off till tomorrow what may be done the day after tomorrow just as well.”

15. “With courage, you will dare to take risks, have the strength to be compassionate, and the wisdom to be humble. Courage is the foundation of integrity.”

16. “Truth is stranger than fiction, but it is because fiction is obliged to stick to possibilities; the truth isn’t.”

17. “Do the thing you fear most, and the death of fear is certain.”

18. “The trouble is not in dying for a friend, but in finding a friend worth dying for.”

19. “The secret of success is making your vocation your vacation.”

21. “All good things arrive unto them that wait and don’t die in the meantime.”

22. “Everyone is a moon, and has a dark side which he never shows to anybody.”

23. “Kindness is the language which the deaf can hear and the blind can see.” 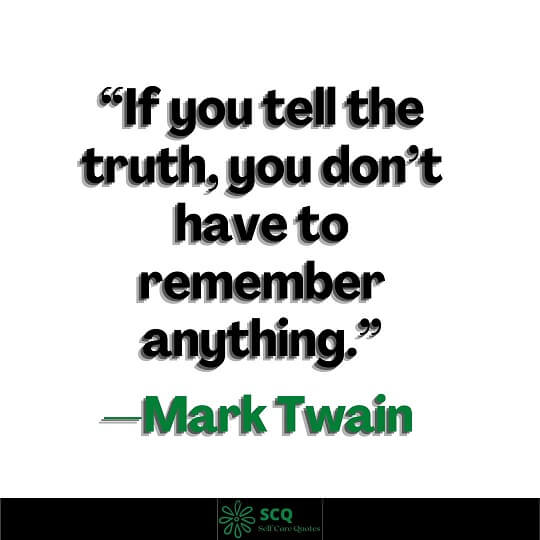 24. “If you tell the truth, you don’t have to remember anything.”

25. “I was seldom able to see an opportunity until it had ceased to be one.”

26. “I have never let my schooling interfere with my education.”

27. “What is the most rigorous law of our being? Growth.”

29. “Keep away from people who try to belittle your ambitions. Small people always do that, but the really great ones make you feel that you, too, can become great.”

30. “The fear of death follows from the fear of life. A man who lives fully is prepared to die at any time.”

32. “Don’t part with your illusions. When they are gone, you may still exist, but you have ceased to live.”

33. “When we remember we are all mad, the mysteries disappear and life stands explained.”

34. “Good friends, good books, and a sleepy conscience: this is the ideal life.”

35. “Always do what is right. It will gratify half of mankind and astound the other.”

37. “Never tell the truth to people who are not worthy of it.”

39. “When you fish for love, bait with your heart, not your brain.”

40. “Never allow someone to be your priority while allowing yourself to be their option.”

41. “You can’t reason with your heart; it has its own laws and thumps about things which the intellect scorns.”

42. “To get the full value of joy you must have someone to divide it with.”

45. “A clear conscience is the sure sign of a bad memory.”

46. “Sanity and happiness are an impossible combination.”

47. “Books are for people who wish they were somewhere else.”

48. “Wrinkles should merely indicate where the smiles have been.”

49. “I have found out there ain’t no surer way to find out whether you like people or hate them than to travel with them.”

50. “Travel is fatal to prejudice, bigotry, and narrow-mindedness, and many of our people need it sorely on these accounts. Broad, wholesome, charitable views of men and things cannot be acquired by vegetating in one little corner of the earth all one’s lifetime.”

51. “It liberates the vandal to travel—you never saw a bigoted, opinionated, stubborn, narrow-minded, self-conceited, almighty mean man in your life but he had stuck in one place since he was born and thought God made the world and dyspepsia and bile for his especial comfort and satisfaction.”

53. “Always obey your parents when they are present.”

54. “The funniest things are the forbidden.”

56. “I did not attend his funeral, but I sent a nice letter saying I approved of it.”

58. “Go to Heaven for the climate, Hell for the company.”

59. “The man with a new idea is a crank until the idea succeeds.”

62. “The man who does not read has no advantage over the man who cannot read.” 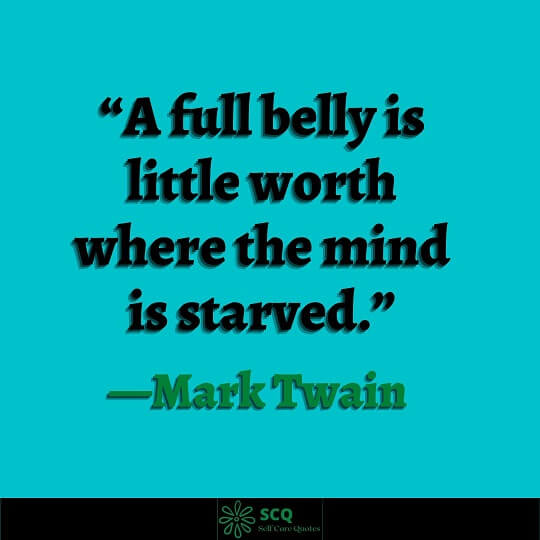 63. “A full belly is little worth where the mind is starved.”

64. “Books are the liberated spirits of men.”

66. “Laughter without a tinge of philosophy is but a sneeze of humor. Genuine humor is replete with wisdom.”

67. “Whenever you find yourself on the side of the majority, it is time to reform—or pause and reflect.” Click To Tweet

69. “Loyalty to country, always. Loyalty to the government, when it deserves it.”

70. “God created war so that Americans would learn geography.”

Samuel Langhorne Clemens was born on November 30, 1835, in the tiny village of Florida, Missouri, the sixth child of John Marshall Clemens and Jane Lampton Clemens. His ancestors were English, Irish, and Scottish. When Sam was four his family moved to Hannibal, a town on the Mississippi River that would be the basis for the fictional town of St. Petersburg in The Adventures of Tom Sawyer (1876) and Adventures of Huckleberry Finn (1885).

Clemens’s father worked as a justice of the peace and as a lawyer. Twain later wrote that his father was “the only man I ever saw who could make hard work delightful.” His mother was a strict Baptist who tried to instill religious values in her children.

Career as a riverboat pilot

Mark Twain’s beloved Mississippi River was the inspiration for many of his stories, and it was also his livelihood. For four years, Twain worked as a riverboat pilot, navigating the dangerous waters of the Mississippi.

It was a demanding job that required skill and concentration. But for Twain, it was also a time of great adventure. He once said, “I had moments of utmost ecstasy. I used sometimes to lean over my wheel in silence for long intervals…and let my thoughts go wandering where they would.”

Those carefree days came to an end when the Civil War began. But even then, the river continued to play an important role in Twain’s life.

Mark Twain’s writing career began in earnest when he worked as a journalist in Nevada. He then wrote two very successful novels, ‘The Adventures of Tom Sawyer’ and ‘Adventures of Huckleberry Finn.’ Later in his career, Twain wrote several non-fiction books, including an autobiography.

Although best known for his novels, Mark Twain’s career spanned many genres. He worked as a journalist, travel writer, lecturer, and historian. In addition to fiction and non-fiction, he also wrote poetry and plays. Throughout his career, Twain maintained a sharp wit and social commentary that made him one of the most popular writers of his time.

Mark Twain’s later life was tumultuous and included several personal tragedies. In 1891, his beloved wife Livy died after a long illness. Twain was devastated by her death and never really recovered from the loss. His daughter Susy also died in 1896, followed by his son Langdon in 1904. The deaths of his wife and children took a toll on Twain and he became increasingly melancholy in his later years.

In 1905, he finished work on what would become one of his most famous novels, “Adventures of Huckleberry Finn.” Though it was initially controversial for its use of racial epithets, the book is now considered one of the great American classics.

Twain’s last years were marked by financial troubles and poor health. He suffered from angina and had to be hospitalized several times. He died on April 21, 1910 at the age of 74.

Mark Twain is one of the most beloved authors in American history. His books have been read by millions of people and his stories have been adapted for film and television.

Twain was a master storyteller and he had a unique voice that was instantly recognizable. He was also a sharp critic of society and he used his writing to point out the hypocrisies and injustices that he saw.

Twain was a complex man with a troubled past, but his writing continues to entertain and inspire readers around the world.

Finally, it is evident that Mark Twain was a man of many words. He had a lot to say about life, love, education, and politics, and he did not hold back.

Mark Twain quotes are still relevant today, and they offer valuable insights into the human condition. If you’re ever feeling lost or in need of some inspiration, be sure to check out some of Twain’s quotes. You’re sure to find something that resonates with you.