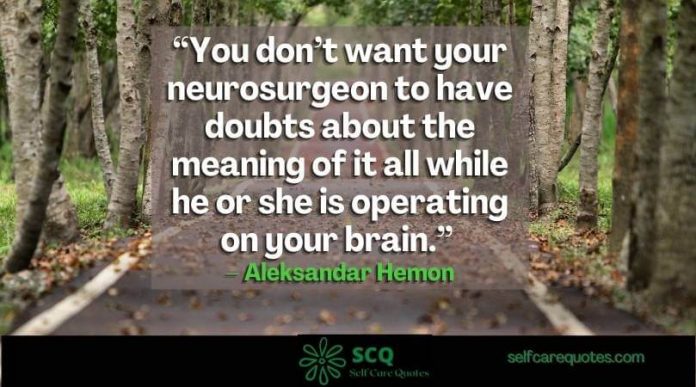 One of the most difficult parts of a neurosurgeon’s job is informing the patient and their family that there is no hope, or that there is a slim chance, or that they will always be in pain. These words are hard to say and even harder to hear. However, we can’t give up hope; we all deserve a chance at life.

There are many neurosurgeons out there who have some very quotable quotes. For example, Dr. James Nicholson once said “It’s like looking at the tip of the iceberg” to describe his experience with neurological surgery. Neurosurgery is a difficult field that requires patience and skill, but it can be rewarding too.

1. “You don’t want your neurosurgeon to have doubts about the meaning of it all while he or she is operating on your brain.” – Aleksandar Hemon

2. “As a neurosurgeon, I did not believe in the phenomenon of near-death experiences.” – Eben Alexander

3. “I remember telling a neurosurgeon, “Don’t give me too much information, because at the moment my ignorance is my best asset.” – Christopher Reeve

5. “An important verity about knowledge is that the brain works most effectively with consciously retained information. We more easily remember what we want to recall later. When we feed our fourteen billion brain cells with information that will enrich us and help others, we are really learning to Think Big.” – Benjamin Carson

6. “I was talking to my dad, who’s a neurosurgeon. He had this academic paper he wanted to publish. Journals take about 18 months to publish a paper, and he just wanted to get things up there.” – Trip Adler

7. “Neurosurgery seemed to present the most challenging and direct confrontation with meaning, identity, and death.” – Paul Kalanithi

8. “The 10,000-hours rule says that if you look at any kind of cognitively complex field, from playing chess to being a neurosurgeon, we see this incredibly consistent pattern that you cannot be good at that unless you practice for 10,000 hours, which is roughly ten years, if you think about four hours a day.” – Malcolm Gladwell

9. “We get out of life what we put into it. The way we treat others is the way we ourselves get treated.” – Benjamin Carson

10. “How gullible are you? Is your gullibility located in some “gullibility center” in your brain? Could a neurosurgeon reach in and perform some delicate operation to lower your gullibility, otherwise leaving you alone? If you believe this, you are pretty gullible, and should perhaps consider such an operation.” – Douglas Hofstadter

11. “Laughter and irony are at heart reminders that we are not prisoners in this world, but voyagers through it.” – Eben Alexander 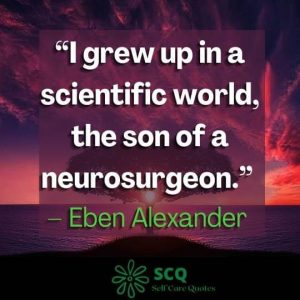 12. “I grew up in a scientific world, the son of a neurosurgeon.” – Eben Alexander

14. “The brain is the organ of destiny. It holds within its humming mechanism secrets that will determine the future of the human race.” – Wilder Penfield

15. “I had this fantasy of becoming a neurosurgeon. You know, the normal Jewish boy fantasy, but I wanted to be a neurosurgeon for some reason. So I started in this unpleasant way. I was an assistant to the coroner, opening up corpses, taking the innards out, opening skulls, taking the brains out.” – Joseph Brodsky

16. “Successful people don’t have fewer problems. They have determined that nothing will stop them from going forward.” – Benjamin Carson

17. “[Doctor Strange] is still quite cocky by the end of the film. No, I’d say the major curve for him is that he learns that it’s not all about him, that there’s a greater good. But what he thinks he was doing as a neurosurgeon, that was good because it benefitted people’s health was really just a furtherment of his attempts to control death and control his own fate and other people’s, but that’s still driven by ego.” – Benedict Cumberbatch

18. “I don’t know where the idea originated that memoir writing is cathartic. For me, it’s always felt like playing my own neurosurgeon, sans anesthesia. As a memoirist, you have to crack your head open and examine every uncomfortable thing in there.” – Koren Zailckas

19. “Do you want to do this thing? Sit down and do it. Are you not writing? Keep sitting there. Does it not feel right? Keep sitting there. Think of yourself as a monk walking the path to enlightenment. Think of yourself as a high school senior wanting to be a neurosurgeon. Is it possible? Yes. Is there some shortcut? Not one I’ve found. Writing is a miserable, awful business. Stay with it. It is better than anything in the world.” – Ann Patchett

20. “Here is the treasure chest of the world – the public library, or a bookstore.” – Benjamin Carson

21. “I was asked by an NPR reporter once, why don’t I talk about race that often. I said it’s because I’m a neurosurgeon. And she thought that was a strange response. And you say – I said, you see, when I take someone to the operating room, I’m actually operating on the thing that makes them who they are. The skin doesn’t make them who they are.” – Benjamin Carson

22. “If we would spend half the amount of money that we currently lavish on sports and entertainment, we could provide complete and free education for every student in this country.” – Benjamin Carson

23. “It’s one of the things that attracted me to the role [Doctor Strange] is the fact that it’s a really widely origin story, I mean this is part of it, but of course there’s the whole chapter before where he’s the neurosurgeon who has the accident. It’s fantastic.” – Benedict Cumberbatch

24. “I’d written Smashed not because I was ambitious and not because writing down my feelings was cathartic (it felt more like playing one’s own neurosurgeon sans anesthesia). No. I’d made a habit–and eventually a profession–of memoir because I hail from one of those families where shows of emotions are discouraged.” – Koren Zailckas

25. “I don’t know where the idea originated that memoir writing is cathartic. For me, it’s always felt like playing my own neurosurgeon, sans anesthesia. As a memoirist, you have to crack your head open and examine every uncomfortable thing in there.” – Koren Zailckas

26. “As a pediatric neurosurgeon, I frequently faced life and death situations, and had to come up with the right diagnosis, the right plan, and execute that plan frequently with other colleagues.” – Benjamin Carson 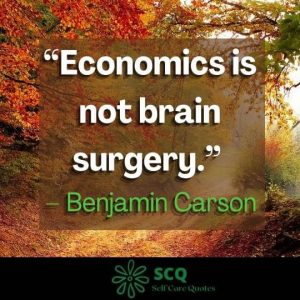 28. “God has given to every one of us more than fourteen billion cells and connections in our brain. Now why would God give us such a complex organ system unless He expects us to use it?” – Benjamin Carson

29. “Mr. President, how long must women wait to get their liberty? Let us have the rights we deserve.” – Alice Paul

30. “If you act like you know what you’re going, you can do anything you want – except neurosurgery.” – Sharon Stone

31. “I think Dr. Ben Carson is a unique political personality. He’s what we call a conviction politician. He actually believes in what he says. Here’s a fellow who had been a neurosurgeon at Johns Hopkins for over 30 years. Babies conjoined at the head, he is the one that did that. He’s a superstar. Ben Carson steps away from medicine, looks at the political environment around him, and he is aghast at what he sees.” – Daniel Henninger

32. “There are more important ways of earning a living, aren’t there? Like being a neurosurgeon. But some plays are very important, aren’t they?” – Michael Gambon

33. “The neurosurgeon removed the right half of my skull. The swelling from the injury was so severe, it was causing enormous pressure on my brain, which if left uncontrolled would have killed me.” – Amy Rankin

34. “Where did the boy genius go? He had been, as a child, expected to be a neurosurgeon, or a great novelist. And now he’s considering (or, okay, refusing to consider) law school. Was the burden of his potential too much for him?” – Michael Cunningham

35. “What had I expected of the first child? Everything. Rocket scientist. Neurosurgeon. Designated hitter. We talked wisely at cocktail parties about the sad mistake our mothers had made in pinning all their hopes and dreams on us. We were full of it.” – Anna Quindlen