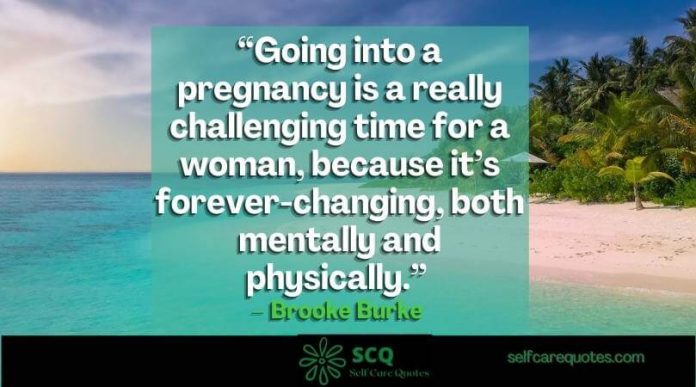 Teen pregnancy can have a significant impact on a young girl’s future. Girls are becoming pregnant at early ages before they are emotionally or physically mature enough to take care of themselves and their children. we have selected 50 teen pregnancy quotes. The quotes below are from individuals who have experienced teen pregnancies first hand.
The statistics below show that teen pregnancy is on the rise, even though it should be declining with the introduction of more sex education programs in schools today. Enjoy!

1. “Going into a pregnancy is a really challenging time for a woman, because it’s forever-changing, both mentally and physically.” – Brooke Burke

2. “If adolescent pregnancy prevention is to become a priority, then our strategy, as advocates, must contain two key elements: civic engagement and education.” – Jane Fonda

4. “Young girls, don’t think getting pregnant or having sex will lead to a man loving or staying with you. Value yourself.” – Enhance Dreams

5. “I don’t particularly like being pregnant. I like the baby in the end. Pregnancy is a very distant thing for me. I can’t seem to believe there’s really a baby there. It’s such a miracle.” – Mary Beth Whitehead

6. “Pregnancy is a process that invites you to surrender to the unseen force behind all life.” – Judy Ford

7. “Let us make pregnancy an occasion when we appreciate our female bodies.” – Merete Leonhardt-Lupa

8. “I’m so fascinated by the concept of teen pregnancy for some reason. Not that I condone it or promote it, but it’s just a very real thing in our country and culture.” – Leven Rambin

9. “If pregnancy were a book they would cut the last two chapters.” – Nora Ephron 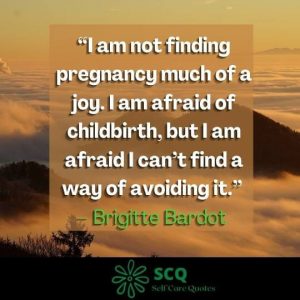 10. “I am not finding pregnancy much of a joy. I am afraid of childbirth, but I am afraid I can’t find a way of avoiding it.” – Brigitte Bardot

12. “It’s normal to gain weight during pregnancy. It’s something that has to happen to your body.” – Carnie Wilson

14. “Whether your pregnancy was meticulously planned, medically coaxed, or happened by surprise, one thing is certain – your life will never be the same.” – Catherine Jones

15. “For many women – myself included – pregnancy brings on tremendous anxiety and confusion, along with the joy.” – Emily Oster

16. “Contraceptives have a proven track record of enhancing the health of women and children, preventing unintended pregnancy, and reducing the need for abortion.” – Louise Slaughter

17. “Pregnancy used to be a beautiful thing…Now it’s just like… ‘Oh wow, she’s pregnant too?.” – Unknown

18. “Part of being a parent is rolling with the punches, so consider an unexpected pregnancy the universe’s way of helping you to learn to do that.” – Heather Wittenberg

19. “Pregnancy is a disease from which you recover in 18 years and 9 months.” – Carrie Latet

20. “I think that what scares me more than getting fat during pregnancy is the responsibility of a child.” – Carol Alt

22. “Pregnancy changed my body; it changed the way I walk.” – Andie MacDowell

24. “Teenagers who openly communicate with their parents are less likely to become teenage parents.” – Anonymous 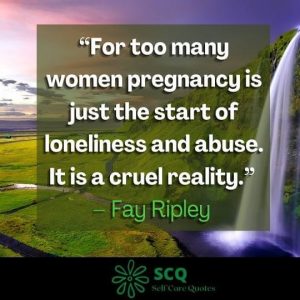 26. “For too many women pregnancy is just the start of loneliness and abuse. It is a cruel reality.” – Fay Ripley

27. “Making a decision to have a child–it’s momentous. It is to decide forever to have your heart go walking around outside your body.” – Elizabeth Stone

28. “Truthfully, being pregnant is changing me as a person. Each day is part of this amazing journey that has completely shifted the focus of my life and made me reevaluate my personal and professional goals.” – Holly Madison

29. “I never ever slept again after my first pregnancy.” – Uma Thurman

30. “The hideous thing is this: I want to forgive him. Even after everything, I do. A baby before my 17th birthday and a future as lonely as the surface of the moon and still the sight of him feels like a homecoming, like a song I used to know but somehow forgot.” – Katie Cotugno

31. “If we as a nation are to break the cycle of poverty, crime and the growing underclass of young people ill-equipped to be productive citizens, we need to not only implement effective programs to prevent teen pregnancy, but we must also help those who have already given birth so that they become effective, nurturing, bonding parents.” – Jane Fonda

32. “Most people, almost everyone knows of a teen mom. Teen pregnancy rates are growing, and we need to bring awareness to that.” – Madison Beaty

33. “It’s about time we make the well-being of our young people more important than ideology and politics. As a country, we benefit from investing in their future by investing in teen pregnancy prevention.” – Jane Fonda

34. “Pregnancy is getting company inside one’s skin.” – Maggie Scarf

35. “In spite of conflicting signals – and in spite of a popular culture that sometimes puts down their innocence – most of our kids are good kids. Large numbers do volunteer work. Nearly all belief in God, and most practice their faith. Teen pregnancy and violence are actually going down. Across America, under a program called True Love Waits, nearly a million teens have pledged themselves to abstain from sex until marriage.” – George W. Bush

Message To The Youth About Teenage Pregnancy

Teenagers usually think they are invincible, but sometimes there are consequences for their actions. A recent study by the CDC has revealed that one in four teenage girls will become pregnant before they turn 20 years old, and one out of three will have a baby before they turn 25. This is a serious problem in our society, and the youth needs to understand the many risks associated with young pregnancies.
Teenage pregnancy may result in poverty for the teenager who becomes pregnant. The teenager’ chances of getting a job after they have a baby are low. Poorer teens are less likely to receive medical care and will suffer from poor health. 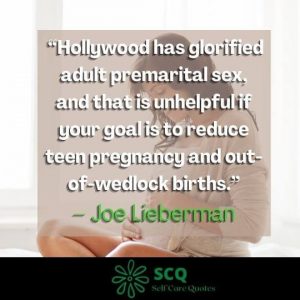 36. “Hollywood has glorified adult premarital sex, and that is unhelpful if your goal is to reduce teen pregnancy and out-of-wedlock births.” – Joe Lieberman

37. “In 1962 and 1963, there were two abominable decisions out of the Supreme Court, and that was taking prayer out of school, and taking bible reading out of school. But you know, if you look at the statistics, two very critical things happened after that date. Number one: teen pregnancy skyrocketed. Number two: violent crime skyrocketed.” – Rafael Cruz

38. “In general, higher rates of belief in and worship of a creator correlate with higher rates of homicide, juvenile and early adult mortality, STD infection rates, teen pregnancy, and abortion.” – Gregory S. Paul

39. “When men and women fail to form stable marriages, the result is a vast expansion of government attempts to cope with the terrible social needs that result. There is scarcely a dollar that the state and federal government spends on social programs that are not driven, in large part, by family fragmentation: crime, poverty, drug abuse, teen pregnancy, school failure, mental and physical health problems.” – Maggie Gallagher

41. “As the most religious country of the 18 surveyed, the U.S. also comes in with the highest rates for teen pregnancy and for gonorrhea and syphilis.” – Gwynne Dyer

42. “The same comparison holds true within the United States itself: Southern and Midwestern states, characterized by the highest levels of religious literalism, are especially plagued by [high rates of homicide, abortion, teen pregnancy, sexually transmitted disease, and infant mortality], while the comparatively secular states of the Northeast conform to European standards.” – Sam Harris

43. “The thing that’s nice about pregnancy is that in the end, you have a baby.” – Ann Romney

44. “Teen pregnancy went way down in the ’90s, and 75 percent of it was because of increased use of contraception.” – Al Franken

45. “I’m so fascinated by the concept of teen pregnancy for some reason. Not that I condone it or promote it, but it’s just a very real thing in our country and culture.” – Leven Rambin

46. “During my high-risk pregnancy, I consistently experienced subpar care from my hospital, which led me to hire two midwives instead. They provided me with excellent and loving care, and they made my pregnancy a truly special and powerful moment in my life.” – Patrisse Cullors

47. “Pregnancy is something that I always love. It’s about hope and the future and a new baby.” – Carine Roitfeld

48. “Pregnancy seemed like a tremendous abdication of control. Something growing inside you which would eventually usurp your life.” – Erica Jong

49. “When you moved, I felt squeezed with a wild infatuation and protectiveness. We are one. Nothing, not even death, can change that.” – Suzanne Finnamore 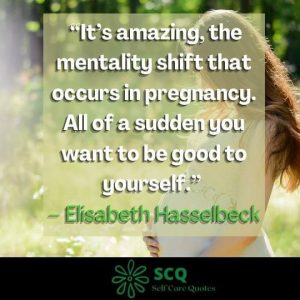 50. “It’s amazing, the mentality shift that occurs in pregnancy. All of a sudden you want to be good to yourself.” – Elisabeth Hasselbeck

“A wanted pregnancy as much as a dreaded pregnancy can play differently than all one’s previous imaginings.” – Susie Orbach

“Pregnancy is a very creative phase for me.” – Natalie Massenet

“In pregnancy, there are two bodies, one inside the other. Two people live under one skin. When so much of life is dedicated to maintaining our integrity as distinct beings, this bodily tandem is an uncanny fact.” – Joan Raphael-Leff

Finally, the only way to stop teen pregnancy is through education and close supervision. Parents need to make sure their children are not left unattended and have no access to condoms or birth control. As a result, they should have a conversation about sex with their children as early as possible.

In order to prevent teen pregnancy, parents should be aware of their child’s surroundings and stress the importance of staying safe.

Melissa J. Queenhttps://selfcarequotes.com/
Hi, I'm Melissa, The Co-Founder of this blog. I enjoy researching quotes and I want other people to know about them, so that can be a shared experience. Let’s share some of the pieces we have collected from this blog.
RELATED ARTICLES
Relationship Quotes

Top 60 How Much Do You Love Me Quotes