HomeQuotesTop 50 Oprah Winfrey Quotes That Will Give You Inspiration
Quotes

Top 50 Oprah Winfrey Quotes That Will Give You Inspiration 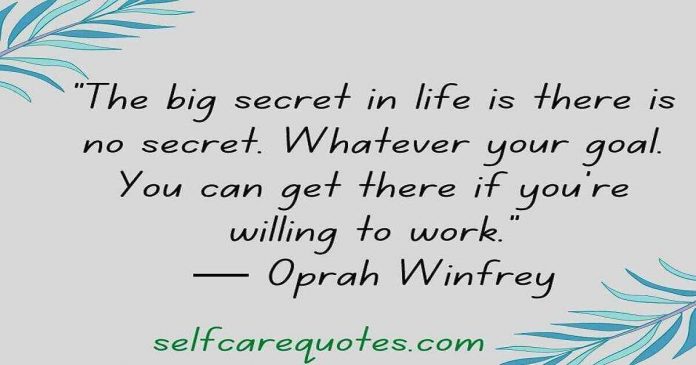 Who is Oprah Winfrey?

People around her have a very good impression of her. Oprah Winfrey is the first Black American multi-billionaire.

Besides these qualities, Oprah Winfrey has a number of famous and realistic quotes. Oprah Winfrey quotes are related to life’s problems and solutions, especially about American life. 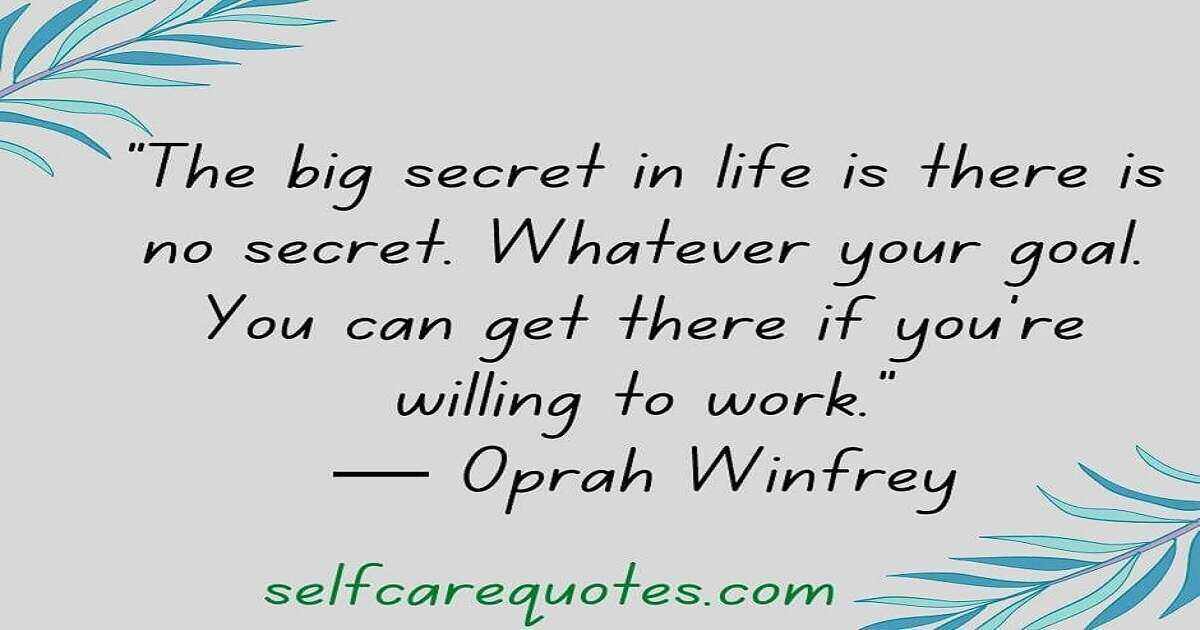 1. “The big secret in life is there is no secret. Whatever your goal. You can get there if you’re willing to work.”― Oprah Winfrey

2. “Passion is energy. Feel the power that comes from focusing on what excites you.”― Oprah Winfrey

3. “Step out of the history that is holding you back. Step into the new story you are willing to create.”― Oprah Winfrey

4. “You have to find what sparks a light in you so that you in your own way can illuminate the world.”― Oprah Winfrey

8. “I’ve come to believe that each of us has a personal calling that’s as unique as a fingerprint – and that the best way to succeed is to discover what you love and then find a way to offer it to others in the form of service, working hard, and also allowing the energy of the universe to lead you. ”― Oprah Winfrey

9. “Real integrity is doing the right thing, knowing that nobody’s going to know whether you did it or not.”― Oprah Winfrey

10. “The more you praise and celebrate your life, the more there is in life to celebrate.” ― Oprah Winfrey

14. “You are responsible for your life. You can’t keep blaming somebody else for your dysfunction. Life is really about moving on.”― Oprah Winfrey

15. “The key to realizing a dream is to focus not on success but significance, and then even the small steps and little victories along your path will take on greater meaning.”― Oprah Winfrey

16. “The more you praise and celebrate your life, the more there is in life to celebrate.’ ― Oprah Winfrey

17. “Bravery shows up in everyday life when people have the courage to live their truth, their vision and their dreams.”― Oprah Winfrey

18. “Whatever our dreams, ideas, or projects, we plant a seed, nurture it — and then reap the fruits of our labors.”― Oprah Winfrey

19. “Self-esteem comes from being able to define the world in your own terms and refusing to abide by the judgments of others.” ― Oprah Winfrey

20. “Only make decisions that support your self-image, self-esteem, and self-worth.” ― Oprah Winfrey

21. “It makes no difference how many peaks you reach if there was no pleasure in the climb.” ― Oprah Winfrey

22. “Forgiveness is giving up the hope that the past could have been any different.” ― Oprah Winfrey

23. “You are where you are in life because of what you believe is possible for yourself.” ― Oprah Winfrey

24. “So go ahead. Fall down. The world looks different from the ground.” ― Oprah Winfrey

25. “I don’t believe in failure. It’s not failure if you enjoy the process.”― Oprah Winfrey

26. There is no failure, only feedback. Everything is either what you want, or what you don’t want. But failure is not real.― Oprah Winfrey

27. “When people show you who they are … believe them!”― Oprah Winfrey

28. “Dogs are my favorite role models. I want to work like a dog, doing what I was born to do with joy and purpose. I want to play like a dog, with total, jolly abandon.

I want to love like a dog, with unabashed devotion and complete lack of concern about what people do for a living, how much money they have, or how much they weigh.

The fact that we still live with dogs, even when we don’t have to herd or hunt our dinner, gives me hope for humans and canines alike.” ― Oprah Winfrey

31. “The whole point of being alive is to evolve into the complete person you were intended to be.”
32. “I was once afraid of people saying, “Who does she think she is?” Now I have the courage to stand and say, “This is who I am.” ― Oprah Winfrey

33. “Books were my pass to personal freedom. I learned to read at age three, and there discovered was a whole world to conquer that went beyond our farm in Mississippi.” ― Oprah Winfrey

35. “Beginning when we are girls, most of us are taught to deflect praise. We apologize for our accomplishments. We try to level the field with our family and friends by downplaying our brilliance. We settle for the passenger’s seat when we long to drive.

That’s why so many of us have been willing to hide our light as adults. Instead of being filled with all the passion and purpose that enable us to offer our best to the world, we empty ourselves in an effort to silence our critics. The truth is that the naysayers in your life can never be fully satisfied.

Whether you hide or shine, they’ll always feel threatened because they don’t believe they are enough. So stop paying attention to them. Every time you suppress some part of yourself or allow others to play you small, you are ignoring the owner’s manual your Creator gave you.

What I know for sure is this: You are built not to shrink down to less but to blossom into more. To be more splendid. To be more extraordinary. To use every moment to fill yourself up.” ― Oprah Winfrey

36. “I would like to thank the people who’ve brought me those dark moments, when I felt most wounded, betrayed. You have been my greatest teachers.” ― Oprah Winfrey

37. “Wherever you are in your journey, I hope you, too, will keep encountering challenges. It is a blessing to be able to survive them, to be able to keep putting one foot in front of the other—to be in a position to make the climb up life’s mountain, knowing that the summit still lies ahead. And every experience is a valuable teacher.” ― Oprah Winfrey

38. “Forgiveness is letting go of the hope that the past can be changed.” ― Oprah Winfrey

And I know for sure that in the final analysis of our lives- when the to-do lists are no more, when the frenzy is finished, when our e-mail inboxes are empty- the only thing that will have any lasting value is whether we’ve loved others and whether they’ve loved us.” ― Oprah Winfrey

40. “When the talk about my troubles was loudest, I did the thing I’ve always spoken of most . I got still and listened for the answer to What is this here to teach me? The answer, first and foremost? Lay your ego down. Step out of your ego so you can recognize the truth.

As soon as I did that, I was able to see the role I had played in creating “my circumstances,” without blaming other people. And — bingo! — I realized that all the noise about my struggle was a reflection of my personal angst and fear.” ― Oprah Winfrey 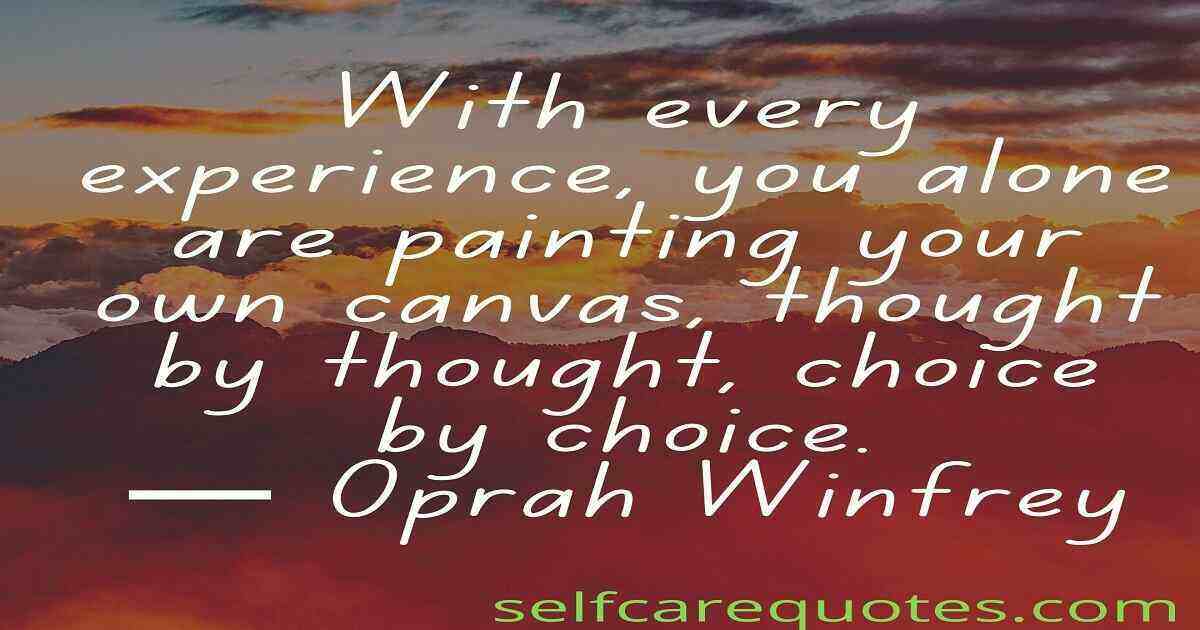 41. With every experience, you alone are painting your own canvas, thought by thought, choice by choice.― Oprah Winfrey

42. It doesn’t matter who you are, where you come from. The ability to triumph begins with you – always.― Oprah Winfrey

43. Breathe. Let go. And remind yourself that this very moment is the only one you know you have for sure.― Oprah Winfrey

44. My idea of heaven is a great big baked potato and someone to share it with. ― Oprah Winfrey

45. I have a lot of things to prove to myself. One is that I can live my life fearlessly. ― Oprah Winfrey

46. Even people who believe they deserve to be happy and have nice things often don’t feel worthy once they have them. ― Oprah Winfrey

48. “Think like a queen. A queen if not afraid to fail. Failure is another stepping stone to greatness.” ― Oprah Winfrey

49. “Create the highest, grandest vision possible for your life, because you become what you believe.” ― Oprah Winfrey 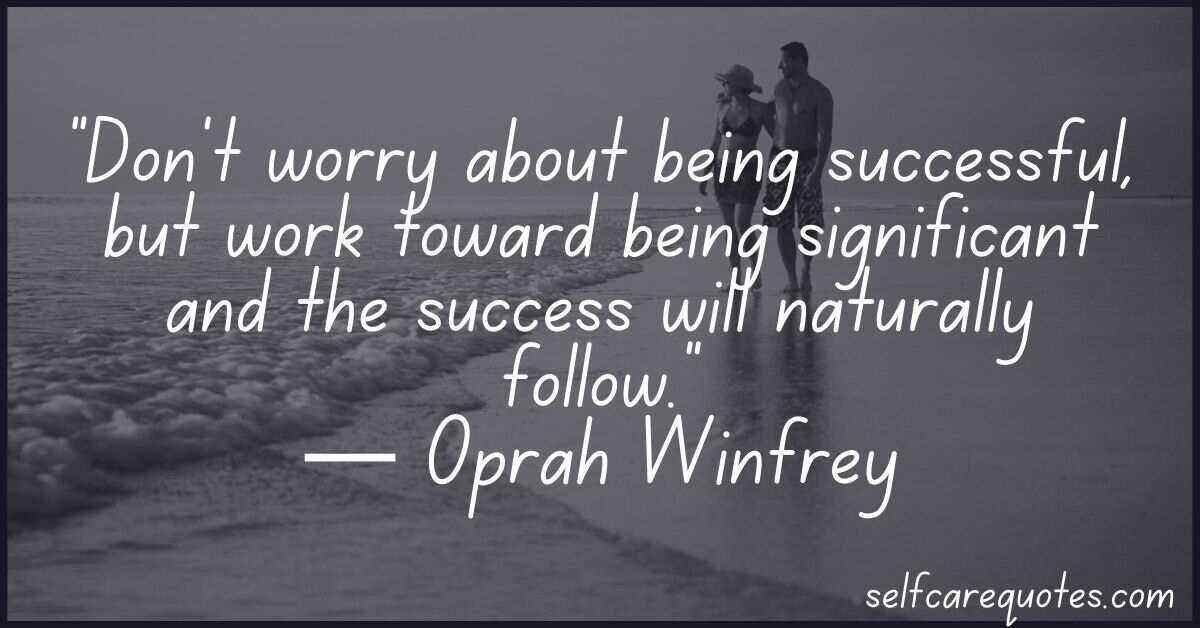 50. “Don’t worry about being successful, but work toward being significant and the success will naturally follow.”― Oprah Winfrey

“The biggest adventure you can ever take is to live the life of your dreams.” ― Oprah Winfrey

“You know you are on the road to success if you would do your job and not be paid for it.” ― Oprah Winfrey

. “Anything you can imagine you can create.” ― Oprah Winfrey

“The reason I’ve been able to be so financially successful is my focus has never, ever for one minute been money.” ― Oprah Winfrey

“With every experience, you alone are painting your own canvas, thought by thought, choice by choice.”― Oprah Winfrey

Oprah Winfrey has vast activity in her life. All her life is represented in her biography. Here we will shortly discuss her biography.

The early life of Oprah Winfrey can be called an example of the worst early life for a human being. Her birthplace is Kosciusko, Mississippi, U.S. She was born on January 29, 1954.

The main problem of her early life was poverty. Her mother was a teenaged girl and Oprah Winfrey also became a mother at 14 after being molested.

She gave birth to a premature baby that died early. After that, she moved to her father. From here she started changing her life.

The financial condition of Oprah Winfrey’s family was not good but she was aware enough to continue her education. She completed her high school graduation in 1971.

After completing this, Oprah Winfrey admitted herself to the Tennessee State University. This was a great moment in her educational life. She started talking in front of people at this time.

The career of Oprah Winfrey has various turns. At the high school level, she started working with a radio in a minor post. This was a beginning. After this, she became a Co-anchor for local news.

At this time, Oprah Winfrey was only 19 years old. In 1977, she started hosting the TV program. At first, she was a co-host. But later she became the main host. This was a brief overview of Oprah Winfrey’s career.

Why do we follow someone? The answer to this question is very simple. We follow people for their special qualities.

Oprah Winfrey possesses some really impressive qualities that enforces us to follow her. One of the strongest qualities of Oprah Winfrey is her kindness.

She is very kind to human beings. In her early life, Oprah Winfrey has seen poverty from very close. For this reason, she also loves to help poor people.

For her huge financial help to poor people, she became famous in her community. Oprah Winfrey quotes also can be followed. These quotes talk about the problems of life.

Oprah Winfrey is a great person with a special personality. The works she completed are really praiseworthy. Her being a TV host gives her money and popularity but being a philanthropist makes her life complete. Oprah Winfrey also increases her popularity.

Related Quotes:      Top 100 Motivational Quotes That Will Inspire You to Be Successful