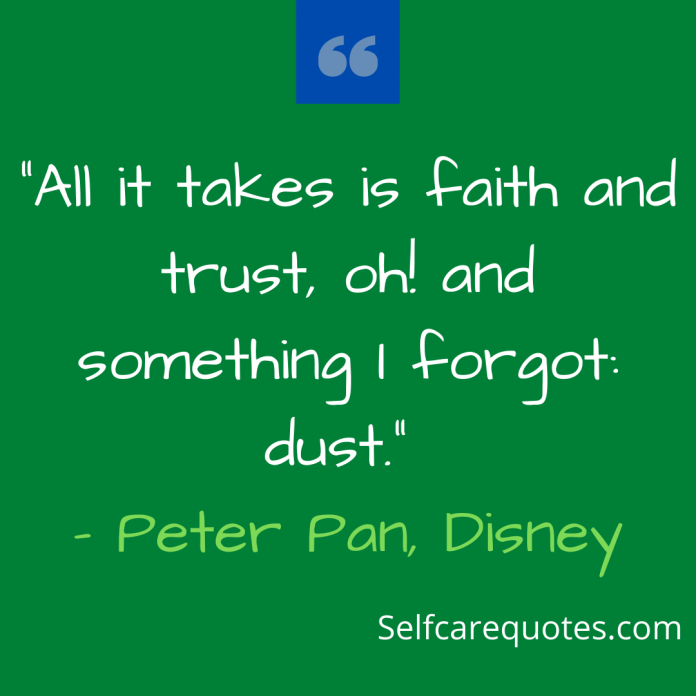 Are you thinking about who is this renowned guy? Well, Peter Pan is not a person. He is a fictional character. The famous Scottish playwright, J. M. Barrie, has created this popular character. This fictional character grows the interest of the audience with his free-spirit and his excellent characteristics. The Peter Pan character enjoys a never-ending childhood. He has the enormous ability to fly. We get astonished to observe his adventure in the fictional fantasy islands.

Time passes, but the age of this character remains the same. The Peter Pan character is renowned not only for his extraordinary features but also for his knowledgeable quotes. We know Peter pan is a character who is not grown up. With his experience, he gives us some valuable excerpts about life, growing up, bravery, dreams, etc. To learn about this character, you may go through the Peter Pan quotes.

Previously we have mentioned that Peter Pan can fly. He uses this blessing to see different islands. We may observe that Peter Pan’s character has expressed his opinion about various serious issues.

He also remarks about his ability to fly. If you read Peter Pan quotes about flying, you may learn that he reveals his flying inspirations. He says if a person doubts his ability, then he cannot achieve his goal. According to Peter Pan, if anyone wants to fly, he should have faith in himself that he can fly. 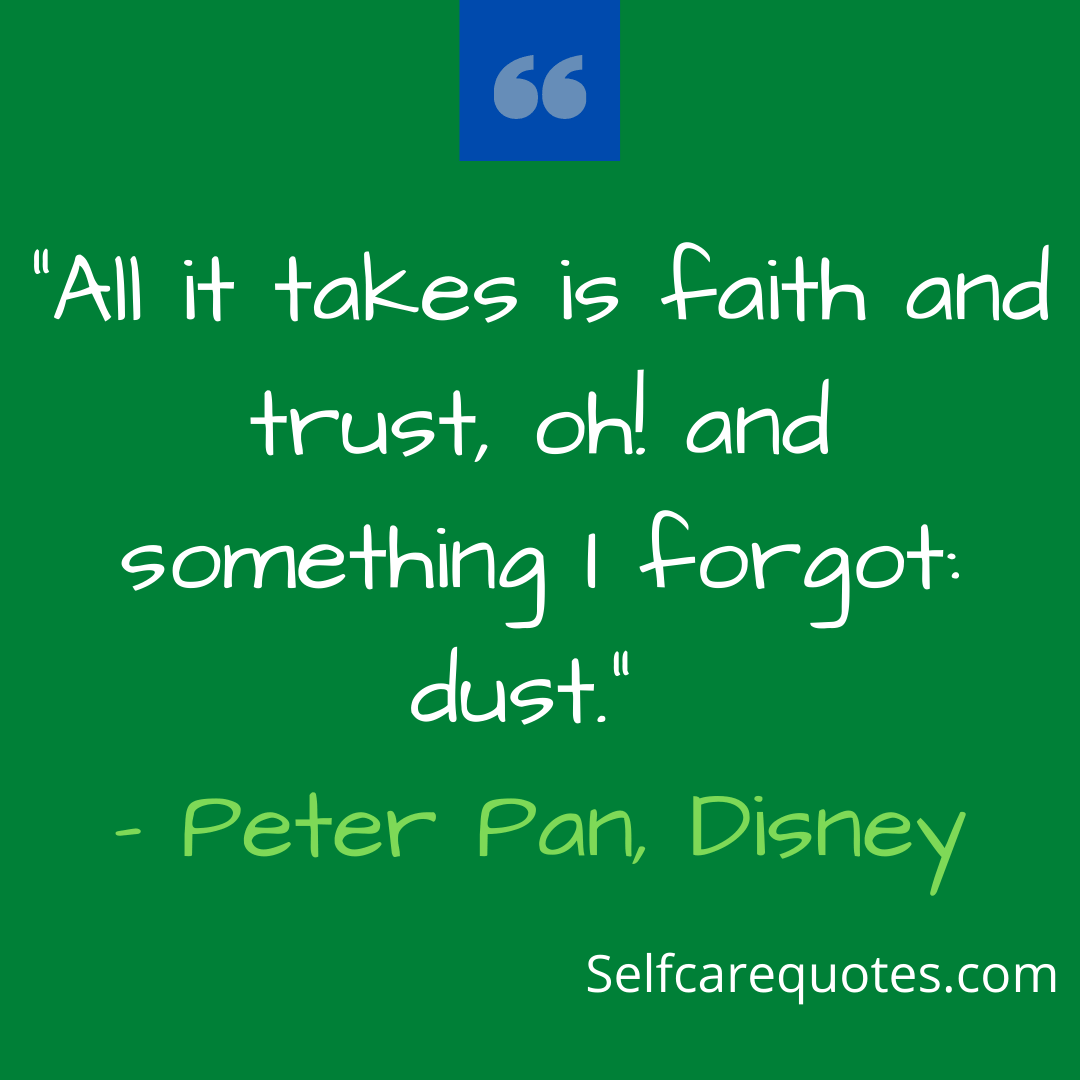 “All it takes is faith and trust, oh! and something I forgot: dust.” – Peter Pan, Disney

2. “Wendy, Wendy, when you are sleeping in your silly bed you might be flying about with me saying funny things to the stars.” – J.M. Barrie, Peter Pan

3. “Jack, Maggie, all you have to do is think one happy thought, and you’ll fly like me.” – Peter Banning, Hook

4. “In time they could not even fly after their hats. Want of practice, they called it; but what it really meant was that they no longer believed.” – J.M. Barrie, Peter Pan

6. “The moment you doubt whether you can fly, you cease forever to be able to do it.” – J. M. Barrie, Peter Pan

7. “Now, think of the happiest things. It’s the same as having wings!” – Peter Pan, Disney

9. “Second star to the right and straight on ’til morning.” – J.M. Barrie, Peter Pan

We know that the Peter Pan character is a carefree boy who has the ability to fly. He enjoys his excellence in flying to his adventurous purposes. Peter Pan is also blessed with permanent childhood. He gets an enormous time to meet up with his adventurous thirst. We find him taking adventures on the islands of Neverland. He visits there as the leader of many boys who was lost. You’ll see this idea on Peter Pan quotes about Neverland. 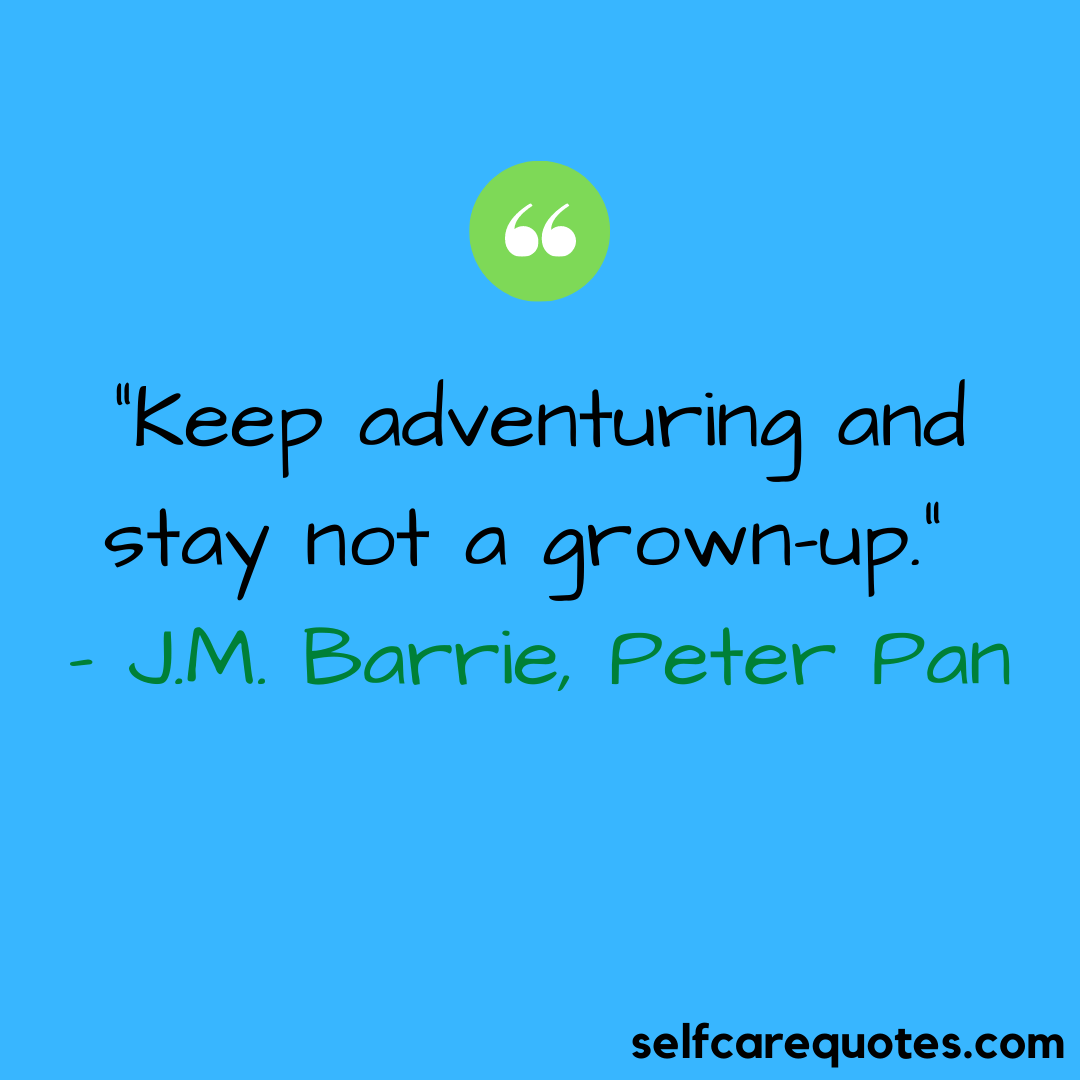 11. “Would you like an adventure now, or would like to have your tea first?” – J.M. Barrie, Peter Pan

12. “Children have the strangest adventures without being troubled by them. For instance, they may remember to mention, a week after the event happened, that when they were in the wood they had met their dead father and had a game with him.” – J.M. Barrie, Peter Pan

16. “You don’t think I would kill him while he was sleeping! I would wake him first and then kill him. That’s the way I always do.” – J.M. Barrie, Peter Pan

We have seen that Peter Pan takes adventure to different islands. In the islands, he meets with many fancy characters like fairies, mermaids, pirate, etc. He also met with the Native Americans and the ordinary boys in his adventure. By observing his quotes, we find his remarks about the fairies. He relates the smile of the children with the fairies. 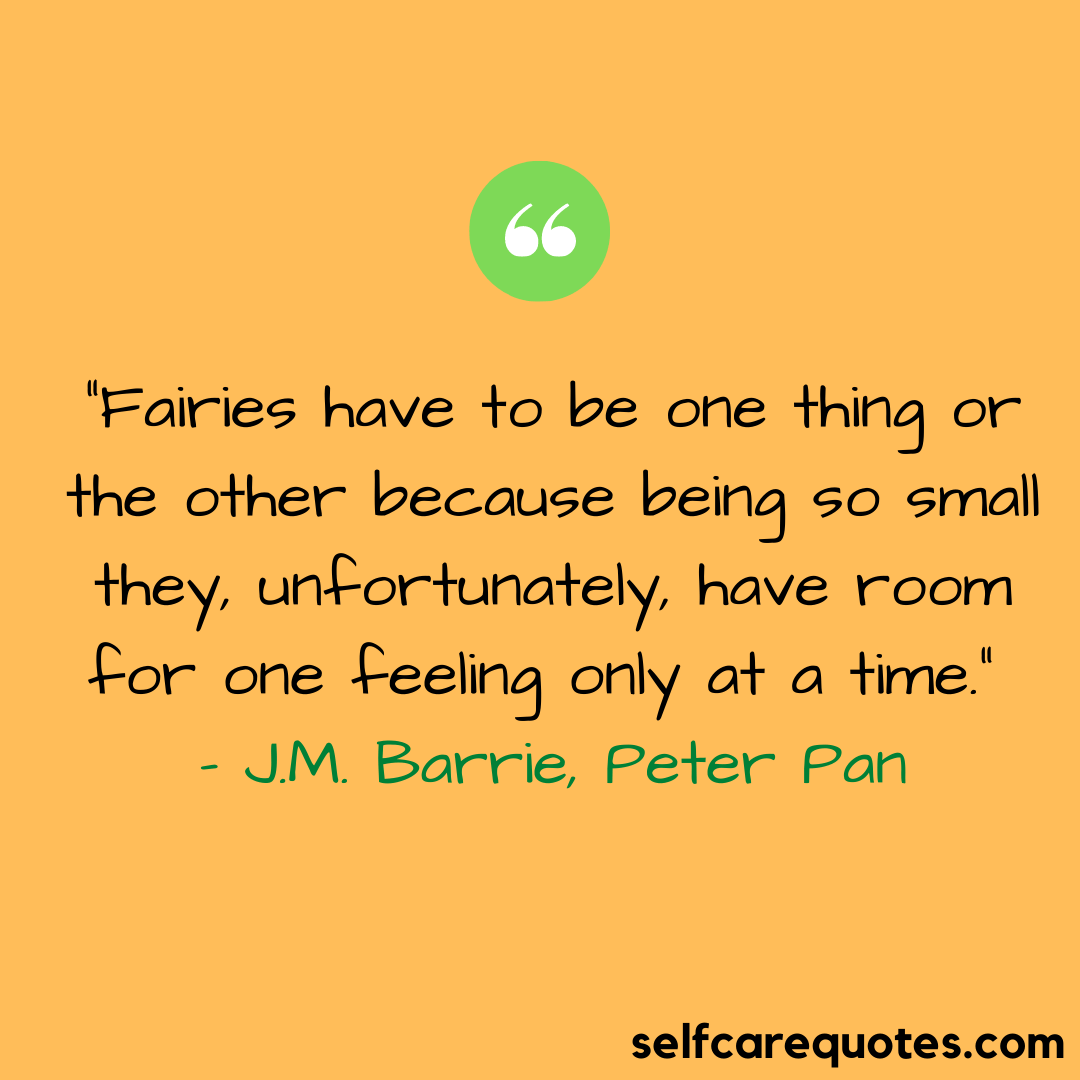 “Fairies have to be one thing or the other because being so small they, unfortunately, have room for one feeling only at a time.” – J.M. Barrie, Peter Pan

18. “When the first baby laughed for the first time, its laugh broke into a thousand pieces, and they all went skipping about, and that was the beginning of fairies.” – J.M. Barrie, Peter Pan

19. “You’re a… you’re a complex Freudian hallucination having something to do with my mother and I don’t know why you have wings, but you have very lovely legs and you’re a very nice tiny person and what am I saying, I don’t know who my mother was; I’m an orphan and I’ve never taken drugs because I missed the ’60s, I was an accountant.” – Peter Banning, Hook

21. “Fairies don’t live long, but they are so little that a short time seems a good while to them.” – J.M. Barrie, Peter Pan 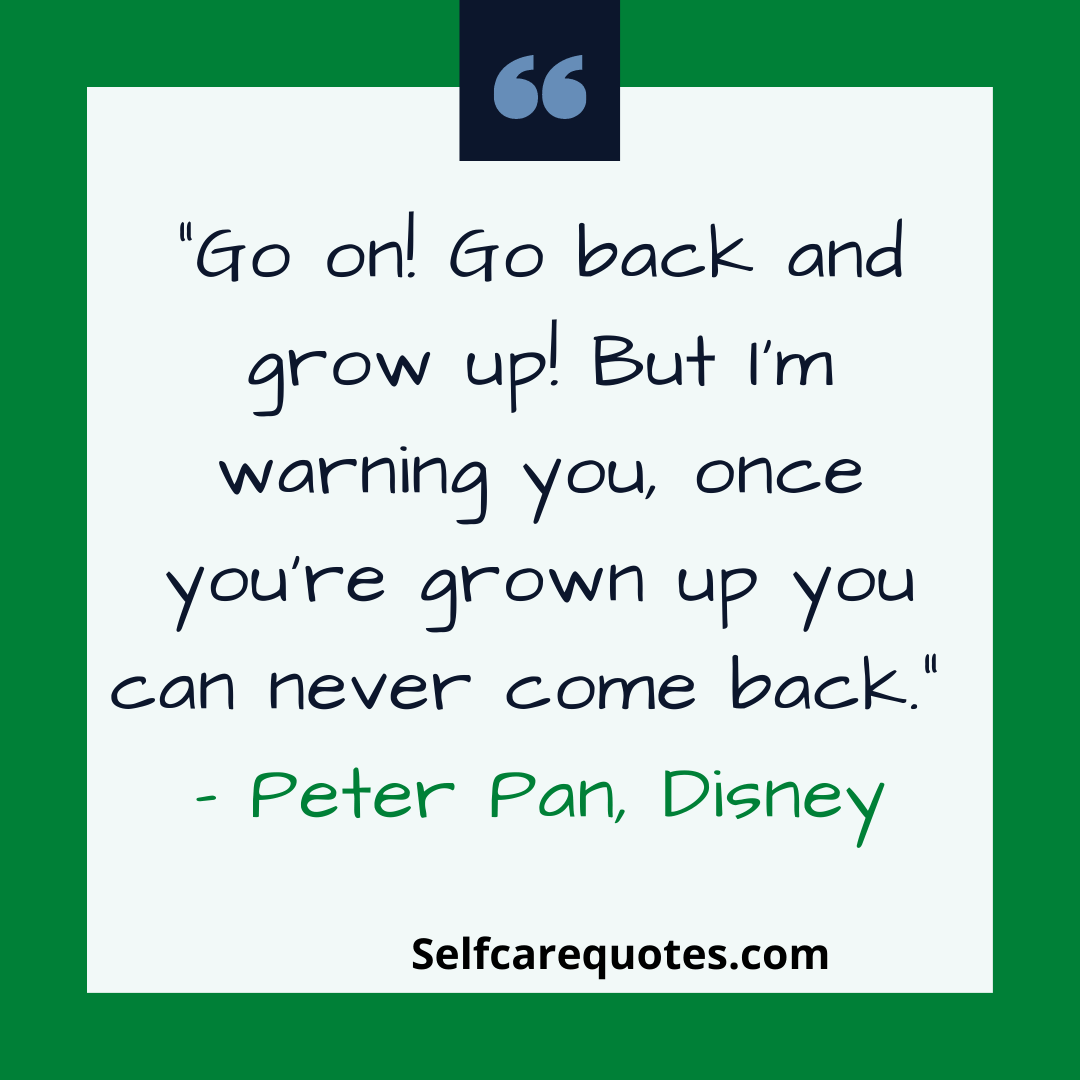 “Go on! Go back and grow up! But I’m warning you, once you’re grown up you can never come back.” – Peter Pan, Disney

25. “Think of all the joy you’ll find when you leave the world behind and bid your cares goodbye.” – Peter Pan, Disney

26. “Come with me, where dreams are born and time is never planned.” – Peter Pan, Disney

28. “Forget them, Wendy. Forget them all. Come with me where you’ll never, never have to worry about grown-up things again.” – J.M. Barrie, Peter Pan

31. “It is not in doing what you like, but in liking what you do that is the secret of happiness.” – J.M. Barrie, Peter Pan

32. “Dreams do come true, if only we wish hard enough. You can have anything in life if you will sacrifice everything else for it.” – Peter Pan, Disney

33. “When there’s a smile in your heart, there’s no better time to start.” – Peter Pan, Disney

35. “You’re not old enough to shave! What are you doing with a sword? And flying around… this is an insurance nightmare!” – Peter Banning, Hook

36. “What is this, some sort of Lord of the Flies preschool? Where are your parents? Who’s in charge, here?” – Peter Banning, Hook

42. “I bet you don’t even have a fourth-grade reading level.” – Peter Banning, Hook

46. “You killed Rufio, you kidnapped my children. You deserve to die.” – Peter Banning, Hook

48. “Wow. Brad, hi! You been holding this long? Uh-huh. I’m incredible. Yeah, Neverland. Uh-huh. Lost Boys. Jim Hook, duel to the death. I’ll fill you in later. Listen, I’d love to chat, but I gotta climb a drain pipe right now. Why? Because I ran out of fairy dust, if not I would’ve flown up.” – Peter Banning, Hook

49. “You are a very ill-mannered young man. Do you know that?” – Peter Banning, Hook

“It is not in doing what you like, but in liking what you do that is the secret of happiness.” – J.M. Barrie, Peter Pan

Peter Pan is the representation of escapism. He symbolizes youthful Innocence. The adventures and the knowledgeable excerpts of Peter Pan encourage and inspire his audiences. With his quotes, he inspires us to be positive in our life. Even with his logic, he reduces the horrifying vision of death. He compares death to a long adventure. Peter Pan quotes make us enthusiastic about our life.