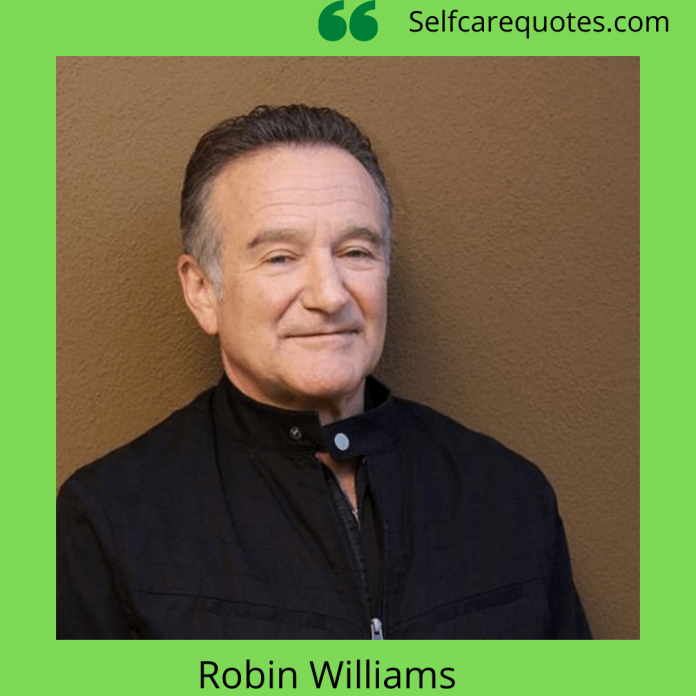 Robin Williams is a renowned American actor. He is noteworthy for his comedy and his performances in movies. His full name is Robin McLaurin Williams. He has made a place in his audiences’ hearts through his extraordinary skills and his memorable voices. The Robin Williams quotes represent his excellences and his brilliance. The entire world acknowledges Robin Williams as one of the best comedians in the world. 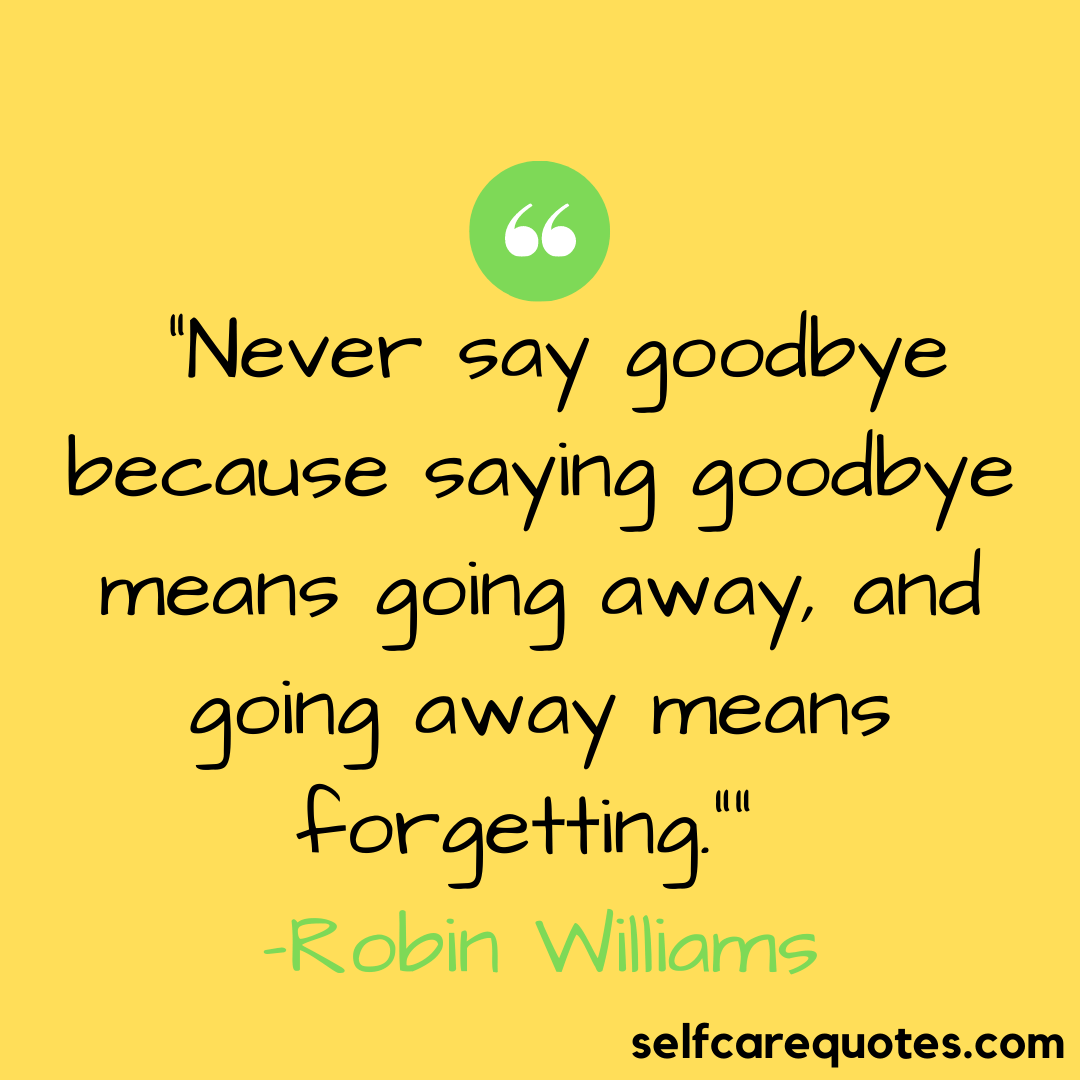 2. “My childhood was really nice. My parents never forced me to do anything; it was always, “If you want to do that, fine.” When I told my father I was going to be an actor, he said, “Fine, but study welding just in case.”

4. “Good people end up in Hell because they can’t forgive themselves.”

5. “Sometimes you can have a whole lifetime in a day and never notice that this is a beautiful as it gets.”

6. “I think the saddest people always try their hardest to make people happy. Because they know what it’s like to feel absolutely worthless and they don’t want anybody else to feel like that.”

7. “Crying never helped anybody do anything, okay? You have a problem you face it like a man.”

8. “Sometimes you got to specifically go out of your way to get into trouble. It’s called fun.”

9. “Don’t associate yourself with toxic people. It’s better to be alone and love yourself than surrounded by people that make you hate yourself.” 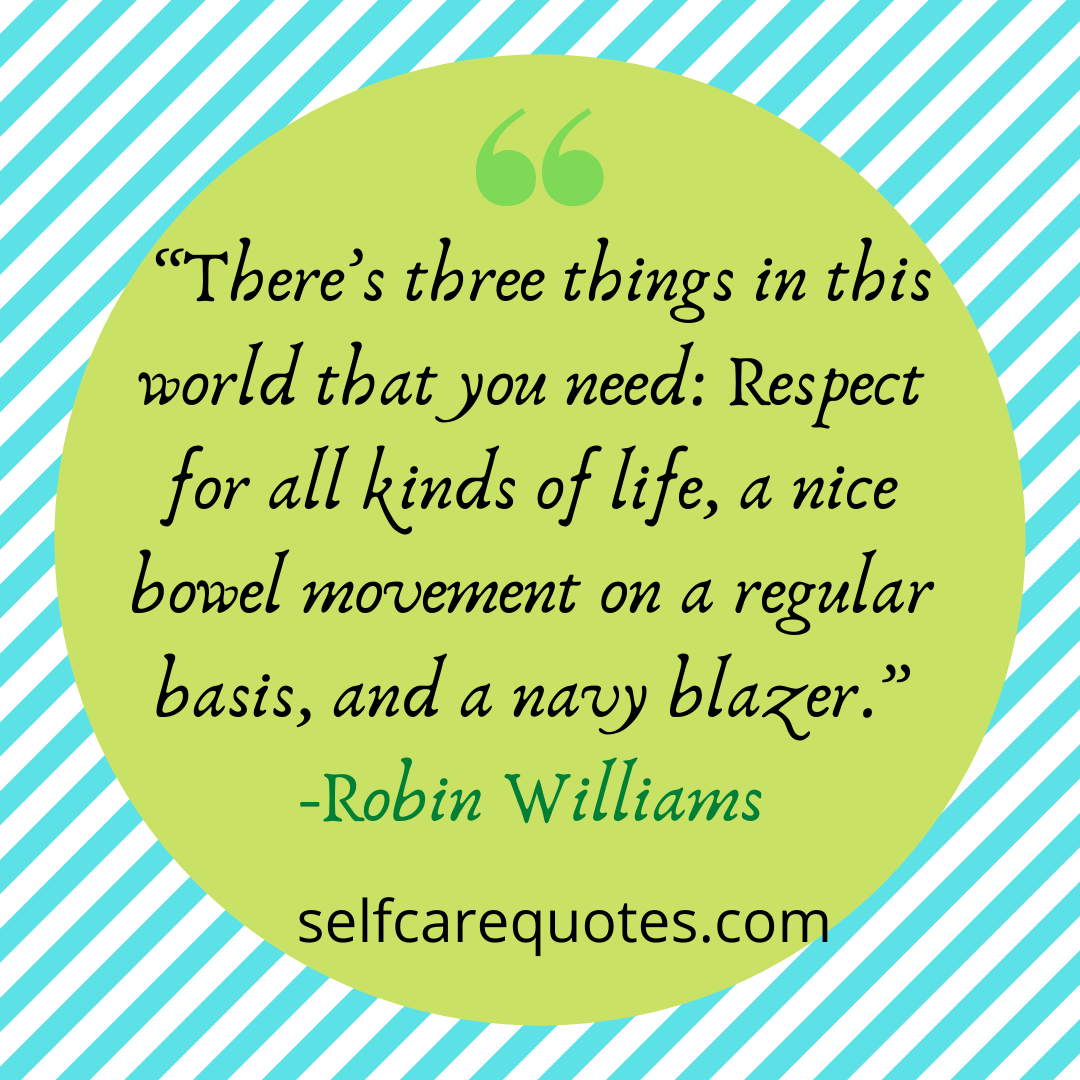 “There are three things in this world that you need: Respect for all kinds of life, a nice bowel movement on a regular basis, and a navy blazer.”

11. “Change is not popular; we are creatures of habit as human beings. “I want it to be the way it was.” But if you continue the way it was there will be no “is.”

12. “My children give me a great sense of wonder. Just to see them develop into these extraordinary human beings.”

13. “Boys, you must strive to find your own voice, because the longer you wait to begin the less likely you are to find it at all.”

14. “Divorce is expensive. I used to joke they were going to call it ‘all the money’ but they changed it to alimony.”

15. “No matter what people tell you, words and ideas can change the world.”

16. “Everyone you meet is fighting a battle you know nothing about. Be kind. Always.”

17. “Most of all, I want to thank my father, up there, the man who when I said I wanted to be an actor, he said, “Wonderful. Just have a back-up profession like welding.”

18. “I always thought the idea of education was to learn to think for yourself.”

19. “You’re not perfect, sport. And let me save you the suspense. This girl you met, she isn’t perfect either. But the question is whether or not you’re perfect for each other. That’s the whole deal. That’s what intimacy is all about.”

20. “You are a big country. You are the kindest country in the world. You are like a really nice apartment over a meth lab.” 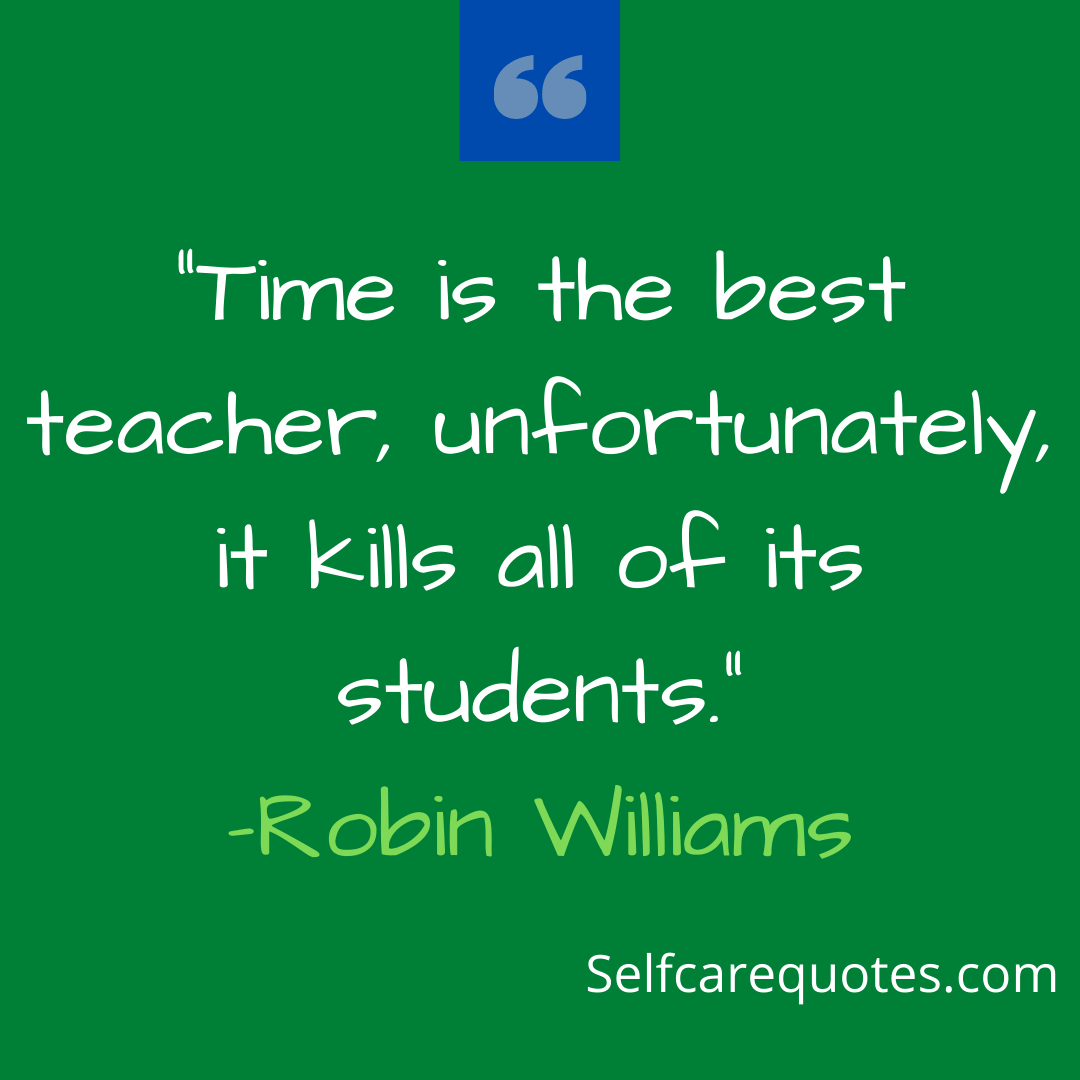 “Time is the best teacher, unfortunately, it kills all of its students.”

22. “Real loss is only possible when you love something more than you love yourself.”

23. “You treat a disease, you win, you lose. You treat a person, I guarantee you, you’ll win, no matter what the outcome.”

24. “But only in their dreams can men be truly free. It was always thus and always thus will be.”

25. “I loved running, but all of a sudden everything hurt so much. I started cycling when Zelda was born.”

26. “I try to make sense of things. Which is why, I guess, I believe in destiny. There must be a reason that I am as I am. There must be.”

27. “You’re only given a little spark of madness. You mustn’t lose it.”

29. “Please, don’t worry so much. Because in the end none of us have very long on this earth. Life is fleeting. And if you’re ever distressed, cast your eyes to the summer sky.”

30. “If women ran the world we wouldn’t have wars, just intense negotiations every 28 days.” 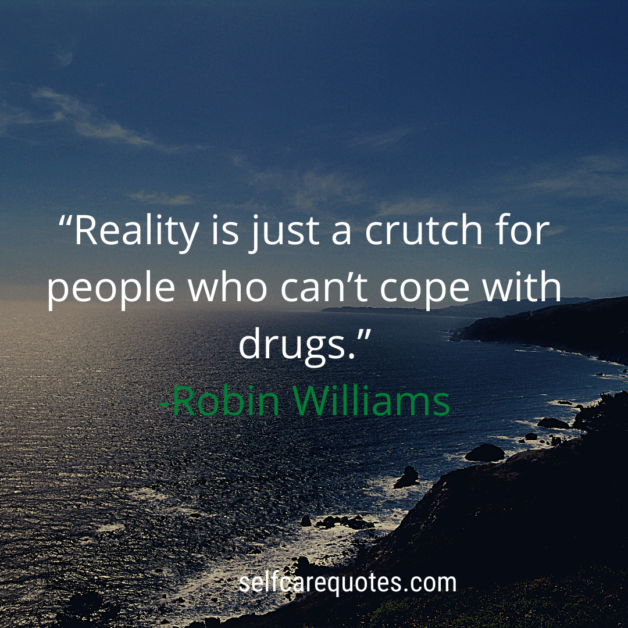 “Reality is just a crutch for people who can’t cope with drugs.”

32. “As an alcoholic, you will violate your standards quicker than you can lower them.”

33. “You know what music is? God’s little reminder that there’s something else besides us in this universe; harmonic connection between all living beings, everywhere, even the stars.”

34. “What’s my credibility? Why are they looking to me for advice? Isn’t there someone more qualified?”

36.72. “The Second Amendment says we have the right to bear arms, not to bear artillery.”

37. “Sometimes you have to make a movie to make money.”

38. “I do believe in love; it’s wonderful – especially love third time around, it’s even more precious; it’s kind of amazing.”

39. “It’s hard when you read an article saying bad things about you. It is as if someone is sticking a knife on your heart. But I am the harshest critic of my work.” 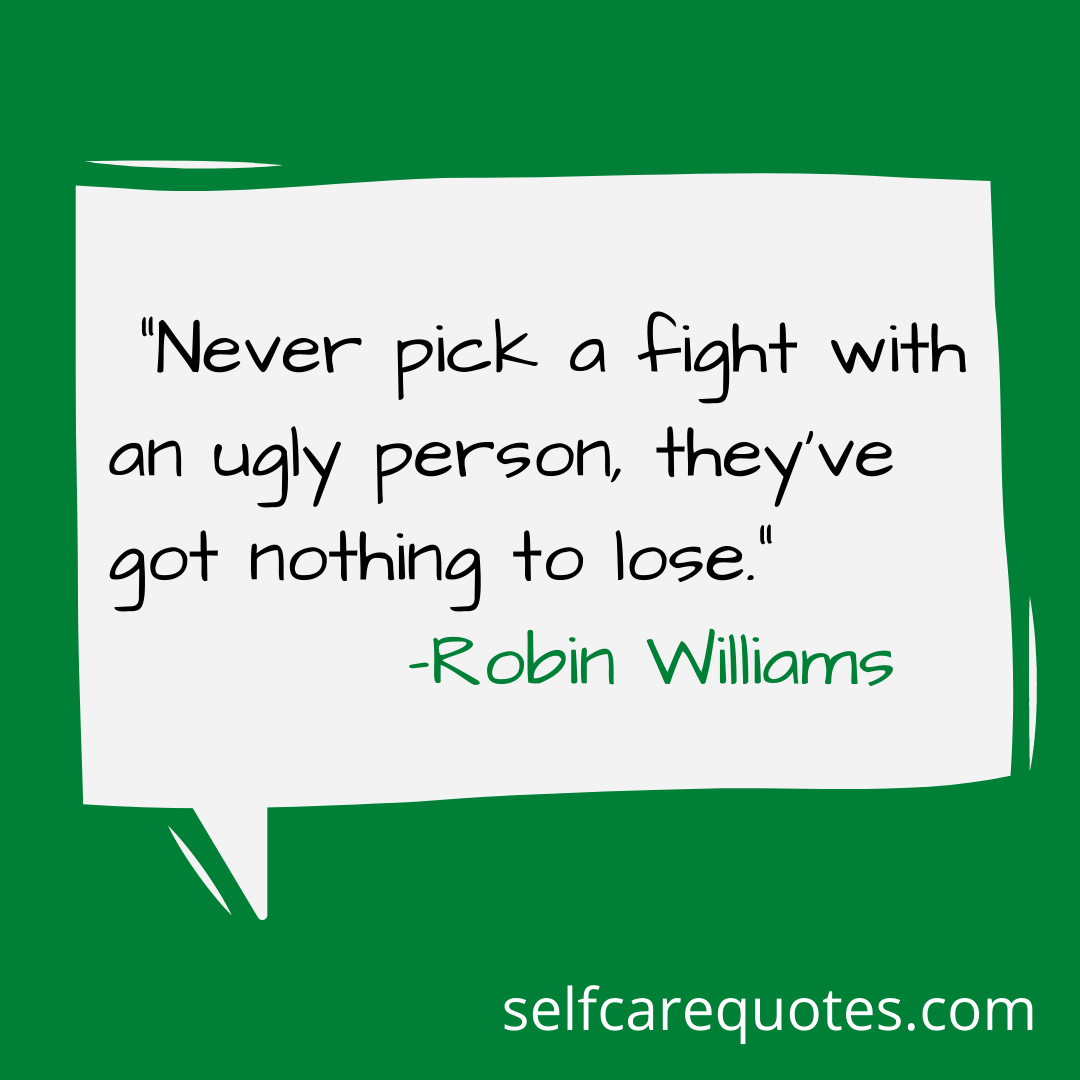 “Never pick a fight with an ugly person, they’ve got nothing to lose.”

42. “If heaven exists, to know that there’s laughs, that would be a great thing.”

43. “To be free. Such a thing would be greater than all the magic and all the treasures in all the world.”

44. “Being a famous print journalist is like being the best-dressed woman on radio.”

47. “There is still a lot to learn and there is always great stuff out there. Even mistakes can be wonderful.”

48. “You will have bad times, but they will always wake you up to the stuff you weren’t paying attention to.”

49. “When I was growing up they used to say, “Robin, drugs can kill you.” Now that I’m 58 my doctor’s telling me, “Robin, you need drugs to live.” I realize now that my doctor is also a dealer…”

50. “When you have a great audience, you can just keep going and finding new things.”

52. “What’s right is what’s left if you do everything else wrong.”

53. “Being in the same room with people and creating something together is a good thing.”

54. “Our job is improving the quality of life, not just delaying death.” 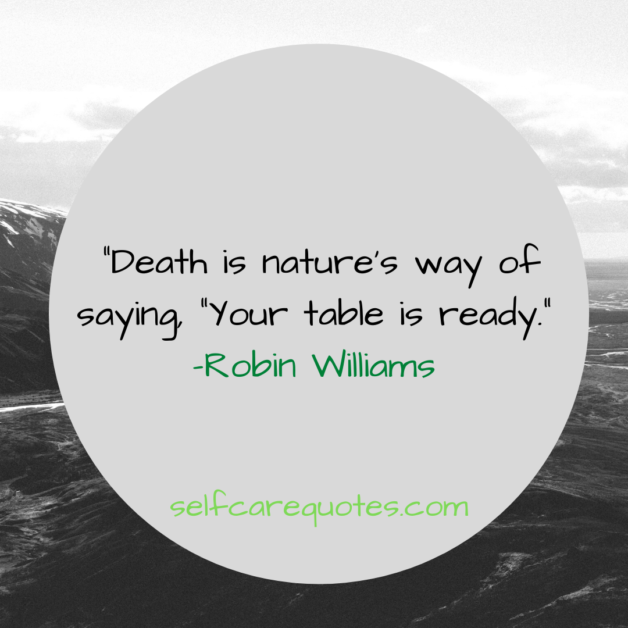 “Death is nature’s way of saying, “Your table is ready.”

Robin Williams was one of the most renowned comedy performers in this world. He achieved success in his life as he could make the best choice for his career. We know that he was a student of Political Science. But his interest was in acting. He did not cling to that subject; instead, he decided to follow his dream. By following his dream, he succeeds in his career. We should also give priority to our interests to determine our careers. Personal-interest is significant in choosing a career.

The birth year of Robin Williams is 1951. He was born in Chicago in America. He was the son of Fitzerald Williams and Laurie McLaurin. During his early childhood, he used to make his mother laugh. Later, this excellence helped him to make a renowned comedian. The habit of his early childhood became his career. He acknowledged this fact and credited his mother for his good humor. Both of his parents were working people. So they could not give him proper time in his childhood. Their maid raised him.

If we go through Robin Williams’ biography, we’ll find his family moving from place to place. His educational institution also changed several times. At first, we see him as a student of Public Elementary school. The school is in Lake Forest. Later he admitted into Gorton Elementary School. His classmates termed him as a funny boy.

Robin Williams revealed that in his childhood, he was a quiet and polite child. However, later he admitted into the Detroit Country Day School. At the secondary level, Robin studied at Redwood High School. After that, he joined Claremont Men’s College of California. In this college, Robin Williams studied Political Science but left it for acting. In the College of Martin, he studied theatre. He received an admission from the Juilliard School.

Robin Williams started his career as a stand-up comedian in the San Francisco Bay area. He started his career by performing in the Holy City Zoo. In the 1970s, we can observe the renaissance period in American comedy. Robin Williams played the leading role in the comedy renaissance. He moved to Los Angeles and performed stand-up-comedy there. We see him television for the first time in 1977. The name of his debut show was “Laugh In”.

He also performed in “L.A. Improv”. “L.A. Improv” has a significant contribution to his success. We also find him performing at the comedy clubs. Later we see his performance in “The Fighting Cocks”, “Mork and Mindy.” On the channel HBO, we find his performance at the “Off the Well”, “A Night at the Met” and “An Evening with Robin Williams”. Robin’s comedy performance in the show of Copacabana was very successful, and he got an award as the recognition of his performance.