The huge attraction for something only for the enjoyment of a short time is called temptation. Temptation helps us to enjoy the short moment but it destroys the future. This is one of the great sins.

This feature of a human being led him to the dom. Different people and different religions mark temptation as the worst thing.

The Bible and the event of Adam and Eve in it show the bad effect of temptation. Thinking about the bad sides of temptation, people hate this and scholars also instruct us about it.

These sayings of famous people are called quotes on temptation. Here we arrange some quotes on the temptation for you to get a clear conception about it.

1. Temptation is like a knife, that may either cut the meat or the throat of a man; it may be his food or his poison, his exercise or his destruction —John Owen

2. Find out what your temptations are, and you will find out largely what you are yourself. — Henry Ward Beecher

4. Knowledge of God’s Word is a bulwark against deception, temptation, accusation, even persecution.—Edwin Louis Cole

5. Do not worry about avoiding temptation. As you grow older it will avoid you. -Joey Adams

6. It’s all right letting yourself go, as long as you can get yourself back.—Mick Jagger

7. By persistently remaining single a man converts himself into a permanent public temptation.—Oscar Wilde

8. A silly idea is current that good people do not know what temptation means. This is an obvious lie. Only those who try to resist temptation know how strong it is… A man who gives in to temptation after five minutes simply does not know what it would have been like an hour later.

That is why bad people, in one sense, know very little about badness. They have lived a sheltered life by always giving in.—C. S. Lewis

9. The realization of God’s presence is the one sovereign remedy against temptation.—Francois Fenelon 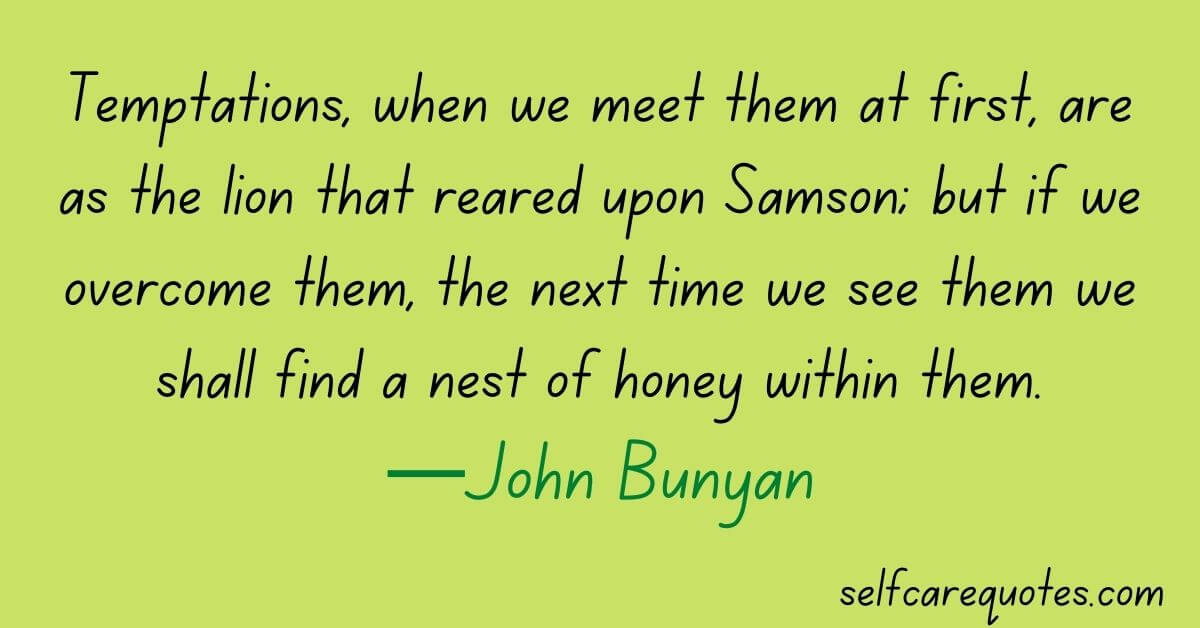 10. Temptations, when we meet them at first, are as the lion that reared upon Samson; but if we overcome them, the next time we see them we shall find a nest of honey within them.—John Bunyan

11. Man is so muddled, so dependent on the things immediately before his eyes, that every day even the most submissive believer can be seen to risk the torments of the afterlife for the smallest pleasure.—Joseph de Maistre

12. Temptations come, as a general rule, when they are sought.—Margaret Oliphant

13.  The last temptation is the greatest treason: to do the right deed for the wrong reason.—T. S. Eliot

14. It is opportunity that makes the thief.—Seneca the Younger

15. All men are tempted. There is no man that lives that can’t be broken down, provided it is the right temptation, put in the right spot.—Henry Ward Beecher

16. Temptation to behave is terrible.—Bertolt Brecht

17. No temptation can ever be measured by the value of its object.—Sidonie Gabrielle Colette

18. Temptation is an irresistible force at work on a movable body.—H. L. Mencken

19. I generally avoid temptation unless I can’t resist it.—Mae West

20. The Lord knows our bearing capacity, both as to coping and to comprehending, and He will not give us more to bear than we can manage at the moment, though to us it may seem otherwise.

21. Do not grieve over the temptations you suffer. When the Lord intends to bestow a particular virtue on us, He often permits us first to be tempted by the opposite vice. Therefore, look upon every temptation as an invitation to grow in a particular virtue and a promise by God that you will be successful, if only you stand fast.—Philip Neri

22. Opportunity may knock only once but temptation leans on the door bell —Oprah Winfrey

23. Every conquering temptation represents a new fund of moral energy. Every trial endured and weathered in the right spirit makes a soul nobler and stronger than it was before.—William Butler Yeats

24. The biggest human temptation is… to settle for too little.—Thomas Merton

25. We usually know what we can do, but temptation shows us who we are.—Thomas a Kempis

26. We often wonder that certain men and women are left by God to the commission of sins that shock us. We wonder how, under the temptation of a single hour, they fall from the very heights of virtue and of honor into sin and shame.

The fact is that there are no such falls as these, or there are next to none. These men and women are those who have dallied with temptation–have exposed themselves to the influence of it, and have been weakened and corrupted by it.—J. G. Holland

27. We gain the strength of the temptation we resist.—Ralph Waldo Emerson

28. It is easier to stay out than get out.—Mark Twain

30. I deal with temptation by yielding to it.—Mark Twain

31. So you tell yourself you are pretty find clay To have tricked temptation and turned it away, But wait, my friend, for a different day; Wait till you want to want to!—Edmund Vance Cooke

Quotes on Temptation and Lust

Temptation and lust both are great sins. They have internal bonding very strongly. If you try to understand both terms very clearly then you will find that Lust is a kind of temptation for sexual desire.

The people who tempt people for sexual activity are lust people. Both are strongly prohibited in religion. Both create a way of destruction for us.

We all should avoid these two great sins. To avoid them, religion can help us most. But if we want to resist them in a different way then we can go through different quotes from different people.

These quotes will help us a lot to know about the lust and temptation and their grim end. 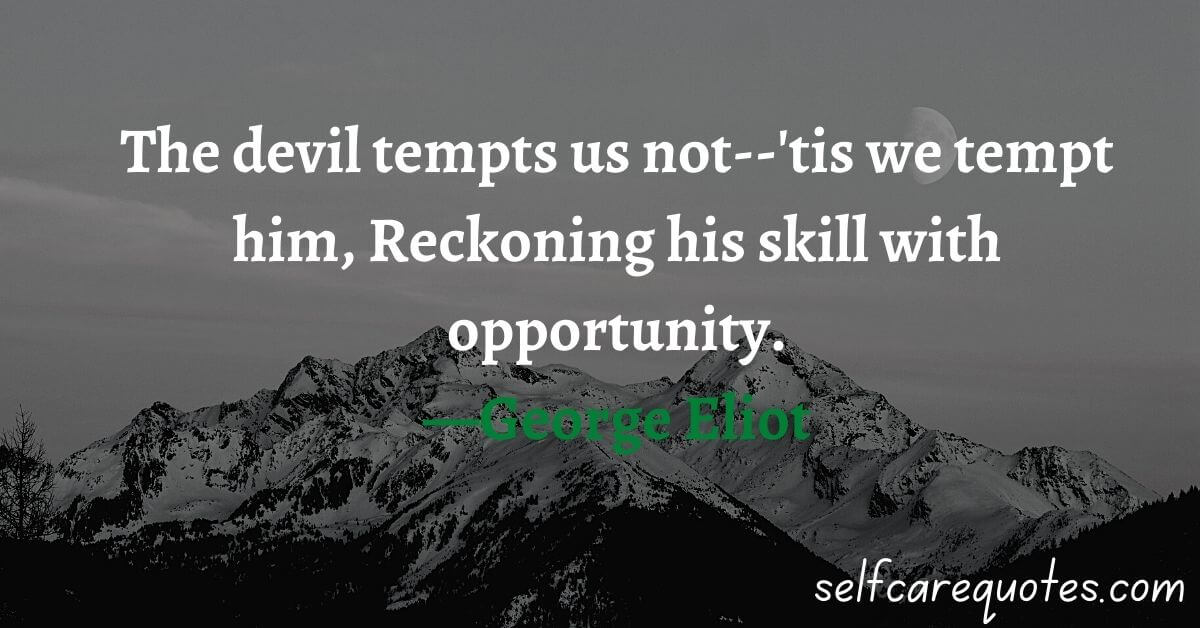 32. The devil tempts us not–’tis we tempt him, Reckoning his skill with opportunity.—George Eliot

33. Do not give dalliance too much rein; the strongest oaths are straw to the fire in the blood.—William Shakespeare

34. In the hour of my distress, When temptations me oppress, And when I my sins confess, Sweet Spirit, comfort me.—Robert Herrick

35. We are surrounded by abysses, but the greatest of all depths is in our own heart, and an irresistible leaning leads us there. Draw thyself from thyself!—Johann Wolfgang von Goethe

36. Do you really think it is weakness that yields to temptation? I tell you that there are terrible temptations which it requires strength, strength and courage to yield to.—Oscar Wilde

37. For years my wedding ring has done its job. It has led me not into temptation. It has reminded my husband numerous times at parties that it’s time to go home. It has been a source of relief to a dinner companion. It has been a status symbol in the maternity ward.—Erma Bombeck

38. There are several good protections against temptation, but the surest is cowardice.—Mark Twain

39. Ever notice that the whisper of temptation can be heard farther than the loudest call to duty.—Earl Wilson

40. ‘Tis one thing to be tempted, another thing to fall.—William Shakespeare

41. About the only time losing is more fun than winning is when you’re fighting temptation.—Tom Wilson

42. As the Sandwich Islander believes that the strength and valor of the enemy he kills passes into himself, so we gain the strength of the temptation we resist.—Ralph Waldo Emerson

43. He who cannot resist temptation is not a man.—Horace Mann

44. Terrible is the temptation to be good.—Bertolt Brecht

45. There is a certain degree of temptation which will overcome any virtue. Now, in so far as you approach temptation to a man, you do him an injury; and, if he is overcome, you share his guilt.—Samuel Johnson

46. Temptation is the fire that brings up the scum of the heart.—William Shakespeare

47. No man knows what he will do till the right temptation comes.—Henry Ward Beecher

The Holy Bible has some great examples of temptation. This also shows the devastating result of temptation. One such example of temptation is the Adam and Eve incident. The temptation through them out of Eden. Most of us believe in God and the day after death.

48. God is better served in resisting a temptation to evil than in many formal prayers.—William Penn

49. We should every night call ourselves to an account: What infirmity have I mastered today? What passions opposed? What temptation resisted? What virtue acquired? Our vices will abate of themselves if they be brought every day to the shrift.—Seneca the Younger 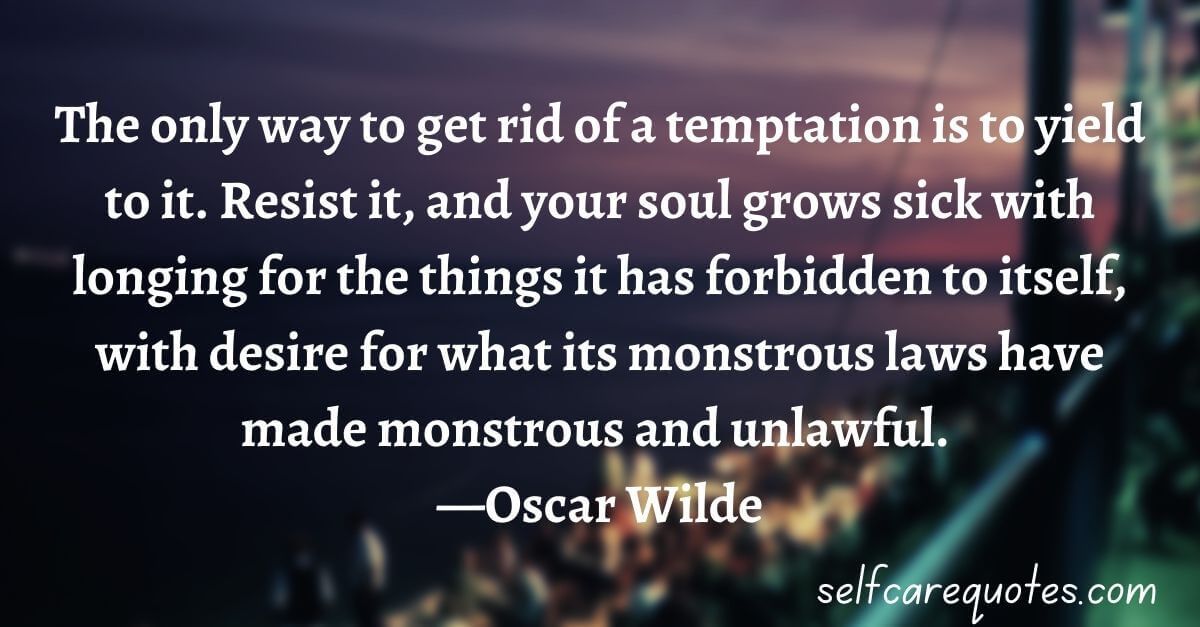 50. The only way to get rid of a temptation is to yield to it. Resist it, and your soul grows sick with longing for the things it has forbidden to itself, with desire for what its monstrous laws have made monstrous and unlawful. —Oscar Wilde

The only way to get rid of temptation is to yield to it… I can resist everything but temptation.—Oscar Wilde

No temptation can gravitate to a man unless there is that is his heart which is capable of responding to it. —James Allen

Every trial endured and weathered in the right spirit makes a soul nobler and stronger than it was before. —James Buckham Kennedy

The temptation to take the easy road is always there. It is as easy as staying in bed in the morning and sleeping in. But discipline is paramount to ultimate success and victory for any leader and any team. —Jocko Willink

The difference between a good and a poor architect is that the poor architect succumbs to every temptation and the good one resists it.—Ludwig Wittgenstein

Abstainer: a weak person who yields to the temptation of denying himself a pleasure. —Ambrose Bierce

Nature and the bad effects of temptation you know very well. But some of us don’t have the right kind of idea about the depth of temptation and its final result. For them, these quotes can work like magic.

If you go through these quotes, then you will be able to create the actual conception of temptation. This is very important.

Some temptation quotes are about the bad sides of it, some are about the result and some others will help you to avoid or resist temptation. So, reading them is very essential for us.

Finally the short but effective suggestion for you about temptation. This is very hard to avoid temptation for our desired things. But we have to do that. Because temptation and our deed to fulfill our temptation all are heinous for us. Both will bring a dome for us.

They will be able to give us enjoyment for a short time but the final result is very hard. It is capable of damaging our peace of mind and also many other things. Be with truth and don’t fall into the trap of Satan.