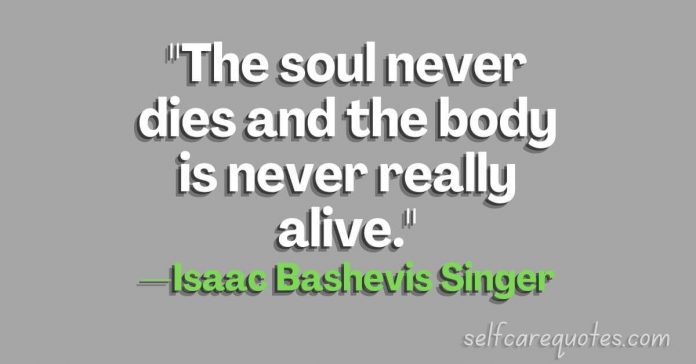 1. The soul never dies and the body is never really alive.—Isaac Bashevis Singer

2. I am confident that there truly is such a thing as living again, that the living spring from the dead, and that the souls of the dead are in existence.—Socrates

3. Friends are all souls that we’ve known in other lives. We’re drawn to each other. Even if I have only known them a day, it doesn’t matter. I’m not going to wait till I have known them for two years, because anyway, we must have met somewhere before, you know.—George Harrison

4. I think reincarnation is possible. Hopefully, we all get recycled.—Christina Ricci

5. Reincarnation is not what a lot of people think. Yes, we are eternal. No, everyone does not attain enlightenment; it’s not necessary; life is smarter than we are.—Frederick Lenz

6. To think you can just go out and help people and somehow get a better life is not reincarnation as I know it. A better life comes from being happy and inner realizations. Now if helping others adds to that, well then, it’s great.—Frederick Lenz

7. I adopted the theory of Reincarnation when I was twenty six. Religion offered nothing to the point. Even work could not give me complete satisfaction. Work is futile if we cannot utilise the experience we collect in one life in the next. When I discovered Reincarnation… time was no longer limited. I was no longer a slave to the hands of the clock… I would like to communicate to others the calmness that the long view of life gives to us.—Henry Ford

8. It is a strong proof of men knowing most things before birth, that when mere children they grasp innumerable facts with such speed as to show that they are not then taking them in for the first time, but are remembering and recalling them.—Marcus Tullius Cicero

9. I died as a mineral and became a plant, I died as a plant and rose to animal, I died as an animal and I was Man. Why should I fear? When was I less by dying?—Rumi

10. Reincarnation contains a most comforting explanation of reality by means of which Indian thought surmounts difficulties which baffle the thinkers of Europe.—Albert Schweitzer

11. The soul is not born; it does not die; it was not produced from anyone Unborn, eternal, it is not slain, though the body is slain.—Ralph Waldo Emerson

12. The Celts were fearless warriors because they wish to inculcate this as one of their leading tenets, that souls do not become extinct, but pass after death from one body to another.—Julius Caesar

13. The doctrine of transmigration was a means of constructing a plausible vindication of the ways of the cosmos to man; none but very hasty thinkers will reject it on the grounds of inherent absurdity.—Thomas Huxley

14. I had never been able to believe that God would give us poor frail humans only one chance at making it — that we would be assigned to some kind of hell because we failed during one experience of mortal life. … So the concepts of karma and reincarnation made logical sense to me.—Jane Goodall

15. Souls never die, but always on quitting one abode pass to another. All things change, nothing perishes. The soul passes hither and thither, occupying now this body, now that… As a wax is stamped with certain figures, then melted, then stamped anew with others, yet it is always the same wax. So, the Soul being always the same, yet wears at different times different forms.—Pythagoras

16. If we could see ourselves… as we really are, we should see ourselves in a world of spiritual natures, our community which neither began at birth nor will end with the death of the body. Immanuel Kant—Spiritual, Community, World

17. Its not possible to do the wrong thing. You do what you do and you experience the consequences of what you do. If you do not experience this before you doe, your soul creates a new life so that you can. This is reincarnation. Eventually, you treat people as you would like to be treated.—Gary Zukav

18. As we live through thousands of dreams in our present life, so is our present life only one of many thousands of such lives which we enter from the other more real life and then return after death. Our life is but one of the dreams of that more real life, and so it is endlessly, until the very last one, the very real the life of God.—Leo Tolstoy

19. Reincarnation is a dance. It is a movement of life to the rhythm of the universe. Spirit and matter join together as one dancing partner. They dance and it goes on forever.—Frederick Lenz

20. I could well imagine that I might have lived in former centuries and there encountered questions I was not yet able to answer; that I had been born again because I had not fulfilled the task given to me.—Carl Jung

22. It is the secret of the world that all things subsist and do not die, but only retire a little from sight and afterward return again.—Ralph Waldo Emerson

23. To me this is the most beautiful, the most satisfactory from a scientific standpoint, the most logical theory of life. For thirty years I have leaned toward the theory of Reincarnation. It seems a most reasonable philosophy and explains many things.—Henry Ford

24. Reincarnation doesn’t simply mean that at the end of this life you will move on to another life in another body, it means that the spirit of life is continually renewing itself and moving to a higher level.—Frederick Lenz

25. There’s nothing wrong with you that reincarnation won’t cure.—Jack E. Leonard

26. As long as you are not aware of the continual law of Die and Be Again, you are merely a vague guest on a dark Earth.—Johann Wolfgang von Goethe

27. I did not begin when I was born, nor when I was conceived. I have been growing, developing, through incalculable myriads of millenniums… All my previous selves have their voices, echoes, promptings in me… Oh, incalculable times again shall I be born.—Jack London

28. It is not more surprising to be born twice than once; everything in nature is resurrection.—Voltaire

30. Reincarnation is not an exclusively Hindu or Buddhist concept, but it is part of the history of human origin. It is proof of the mindstream’s capacity to retain knowledge of physical and mental activities. It is related to the theory of interdependent origination and to the law of cause and effect.—Dalai Lama

31. I’m a great believer in the hereafter, in karma, in reincarnation. It does make sense. I believe that God is not just a law-giver, but a creative artist. The greatest of all. And what characterises artists is that they want to redo their work. Maybe it didn’t come off perfectly, so they want to see it done again and improved. Reincarnation is a way for God to improve his earlier works.—Norman Mailer

32. Know, therefore, that from the greater silence I shall return… Forget not that I shall come back to you… A little while, a moment of rest upon the wind, and another woman shall bear me.—Khalil Gibran

33. Most people don’t why they are born or why they die. They have no understanding of the forces in life that pull them and push them to their death and another rebirth in this or another world.—Frederick Lenz

34. As far back as I can remember I have unconsciously referred to the experiences of a previous state of existence.—Henry David Thoreau

35. When a person who has had highly evolved past lives is going through a strong past-life transit, that person comes to know things about life, death and other dimensions that most people in our world aren’t aware of.—Frederick Lenz

36. There is no death. How can there be death if everything is part of the Godhead? The soul never dies and the body is never really alive.—Isaac Bashevis Singer

37. It can be shown that an incorporeal and reasonable being has life in itself independently of the body… then it is beyond a doubt bodies are only of secondary importance and arise from time to time to meet the varying conditions of reasonable creatures. Those who require bodies are clothed with them, and contrariwise, when fallen souls have lifted themselves up to better things their bodies are once more annihilated. They are ever vanishing and ever reappearing.—Origen

38. Rebirth is an affirmation that must be counted among the primordial affirmations of mankind. The concept of rebirth necessarily implies the continuity of personality. Here the human personality is regarded as continuous and accessible to memory, so that, when one is incarnated or born, one is able, potentially, to remember that one has lived through previous existences, and that these existences were one’s own, ie, they had the same ego form as the present life. As a rule, reincarnation means rebirth in a human body.—Carl Jung

39. I have been born more times than anybody except Krishna.—Mark Twain

40. Were an Asiatic to ask me for a definition of Europe, I should be forced to answer him: It is that part of the world which is haunted by the incredible delusion that man was created out of nothing, and that his present birth is his first entrance into life.—Arthur Schopenhauer

41. The soul comes from without into the human body, as into a temporary abode, and it goes out of it anew it passes into other habitations, for the soul is immortal.—Ralph Waldo Emerson

42. We are born and reborn countless number of times, and it is possible that each being has been our parent at one time or another. Therefore, it is likely that all beings in this universe have familial connections.—Dalai Lama

43. I realized that Eastern thought had somewhat more compassion for all living things. Man was a form of life that in another reincarnation might possibly be a horsefly or a bird of paradise or a deer. So a man of such a faith, looking at animals, might be looking at old friends or ancestors. In the East the wilderness has no evil connotation; it is thought of as an expression of the unity and harmony of the universe.—William O. Douglas

44. The virtuous shall have the power to revive and live again. All pure and holy spirits live on in heavenly places, and in course of time they are again sent down to inhabit righteous bodies—Josephus

45. Our problems are man-made, therefore they may be solved by man. And man can be as big as he wants. No problem of human destiny is beyond human beings.—John F. Kennedy

46. I know I am deathless. No doubt I have died myself ten thousand times before. I laugh at what you call dissolution, and I know the amplitude of time.—Walt Whitman

47. Many practitioners think there is some giant balance scale, where someone is keeping track, like Santa Claus, and that will determine your allotment of presents. That’s a very exoteric understanding of reincarnation.—Frederick Lenz

49. Reincarnation is not necessarily linear. Sometimes people actually become more immersed in darkness or illusion than they were in previous lifetimes.—Frederick Lenz

50. Finding myself to exist in the world, I believe I shall, in some shape or other, always exist.—Benjamin Franklin